The Duchess of Sussex, 41 – who is currently living in a $14 million California mansion after stepping back from royal duties – joined her husband, the Duke, 38, in New York yesterday to receive an ‘anti-racism’ award at the Ripple of Hope Gala.

The couple put on a loved-up display at the event, with Prince Harry wrapping a protective arm around Meghan, while at another point, the couple clasped hands.

Body language expert Judi James told FEMAIL the couple appeared ‘excited and utterly delighted’ to be attending the event, explaining: ‘Harry and Meghan have probably never sent out a stronger message of A-lister unity and validation of purpose as they do here.’

The body language expert suggested Meghan’s styling was ‘bridal-like’ for the occasion.

The Duchess opted to wear a custom-made form-fitting white Louis Vuitton gown that left her shoulders completely exposed, and also featured a racy thigh-high split that flashed her lean legs as she strutted through the Manhattan rain.

Meghan paired her white off-the-shoulder look with a boxy black clutch and long gold earrings, while her brunette locks were slicked back into a low bun, allowing her glamorous makeup look to shine through.

It was a similar look to the one the Duchess wore at her wedding four years ago – when she donned a bow-necked dress and opted to wear her hair in a low bun. 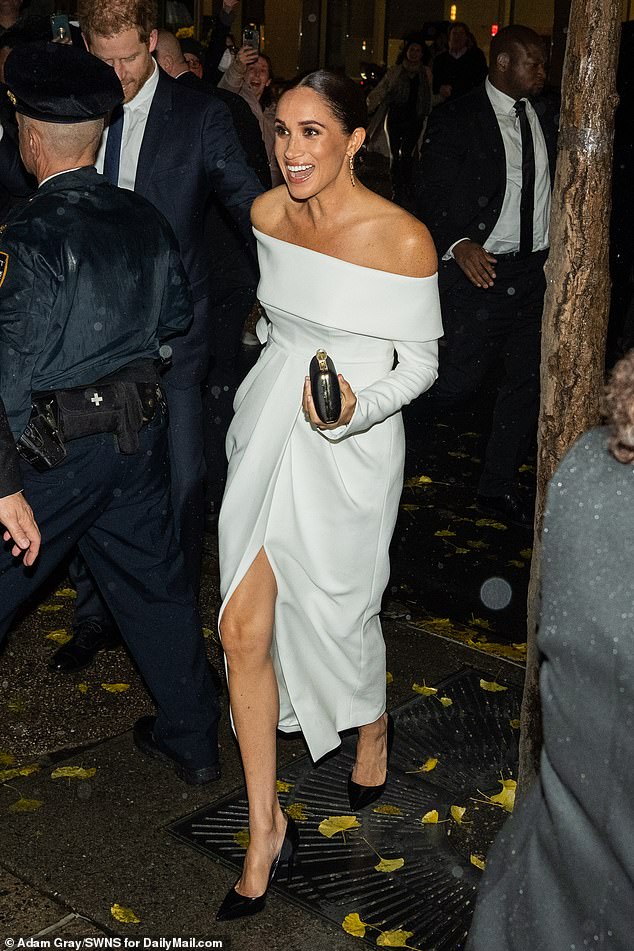 The Duchess of Sussex, 41 – who is currently living in a $14 million California mansion after stepping back from royal duties – was ‘almost bridal’ in her look last night, Judi James claimed 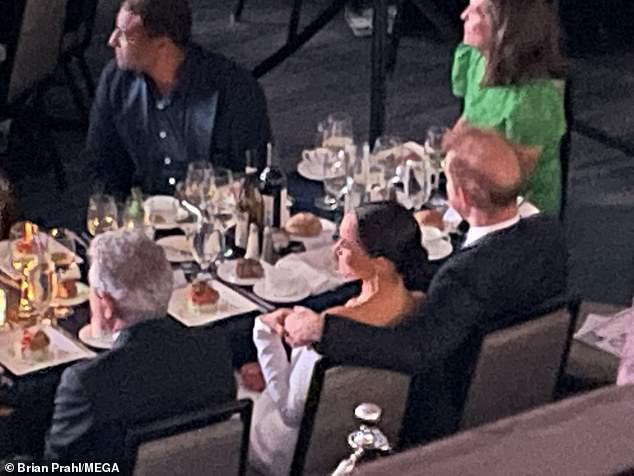 Judi continued: ‘Everything, from their excited, beaming, utterly delighted grins to Meghan’s simplicity and focus of almost bridal styling, with the neckline nod to Kate’s Earthshot dress and the huge ring she placed at the forefront of their hand clasps, suggests confidence and celebration for their cause.’

She suggested Meghan and Harry’s arrival at the event indicated a kind of ‘excitement’ and ‘unadulterated pleasure.’

She explained: ‘It does look like Meghan’s arrival, with Harry dancing attendance, waiting by the car door with umbrella in hand as she descends elegantly to sweep into the venue with a disregard for the rain and the umbrella.

Meanwhile the expert went on to say Prince Harry appeared to be in his element at the event.

She said: ‘Harry’s poses on the stage in these clips show moments of a man loving the attention, both from his audience and of course his wife.

‘The haunted gaze has gone and instead we have a man grinning playfully from ear to ear.

‘The alpha leg splay that signals feelings of physical and emotional power is re-enforced by the left hand on his thigh with the elbow poking out in a part-splay ritual.

‘Splaying shows a desire to use up as much space as possible and to look as large, powerful and strong as possible. 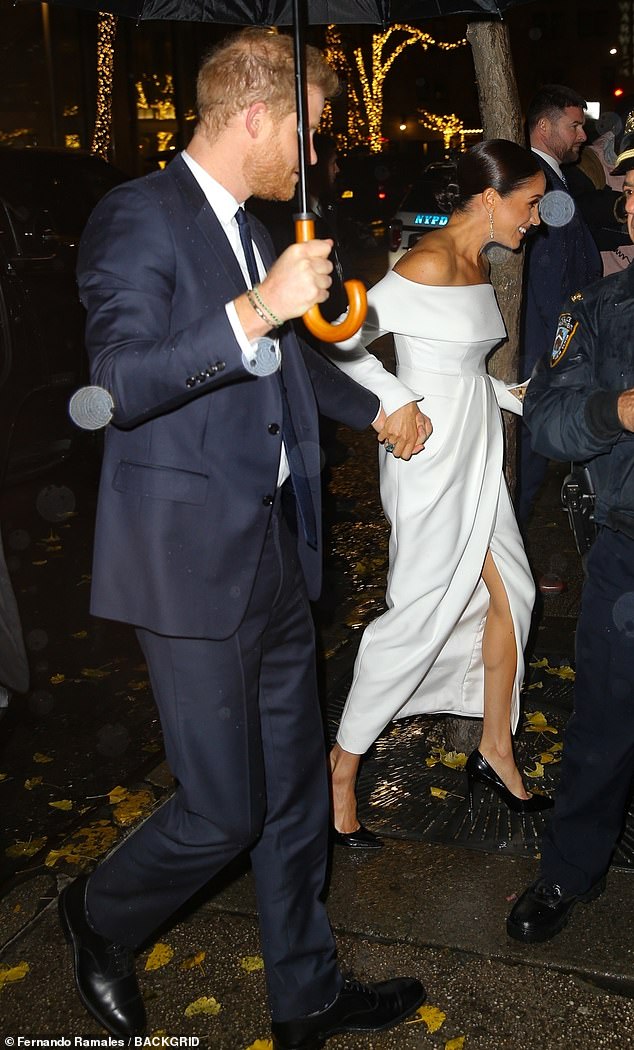 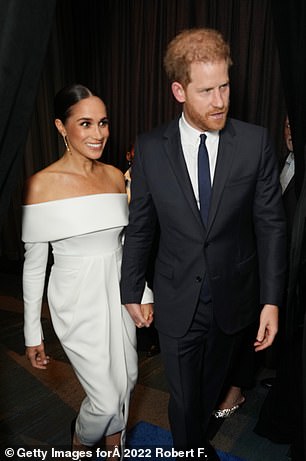 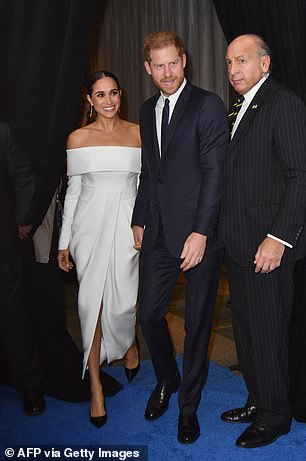 ‘Harry’s date-night-style gesture of placing one arm around Meghan’s shoulder at the dinner table is another example of his feeling of power and status.

‘He is clearly also happily in joker mode, too. On stage he is clearly adding the humour to add to the performance and to surf the attention by entertaining while Meghan gazes adoringly.

‘The use of humour is another suggestion of Harry’s confidence here and Meghan replicates their pose on stage during the doomed launch of the royal ‘Fab Four’ years ago by doubling in laughter to flatter and encourage her husband.

‘Harry also seems to be using a hand gesture on stage where the hand is extended flat with the fingers slightly splayed and the open palm turned upward. 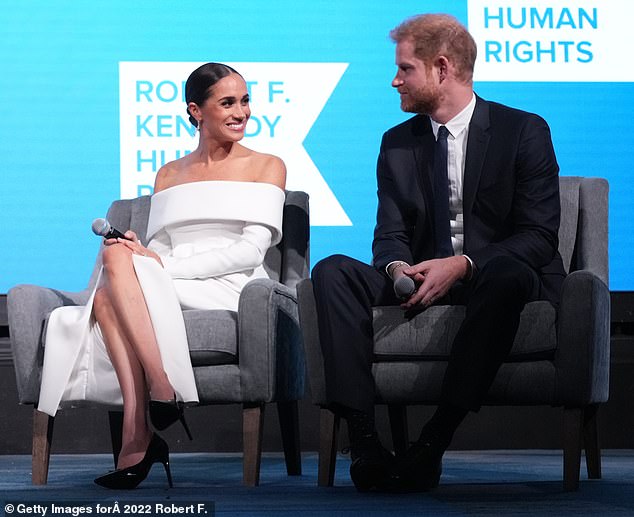 Meanwhile the expert went on to say Prince Harry appeared to be in his element at the event, while Meghan was ‘gazing on adoringly’ 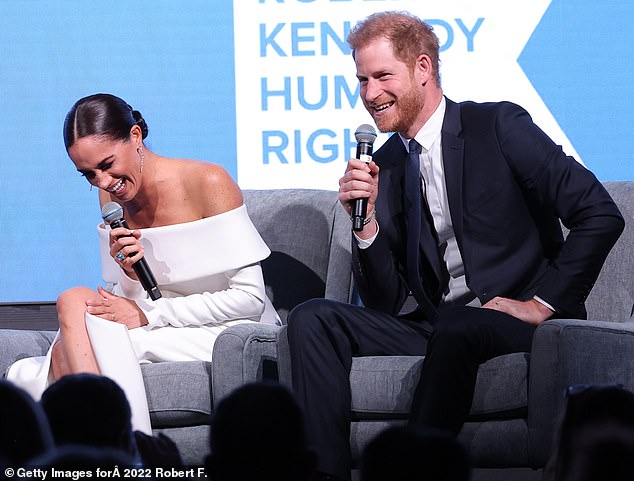 ‘This very emphatic gesture is usually performed when someone has a desire to be seen as honest and open.’

Judi continued: ‘We have two versions of their signature hand clasp, both romantic and symbolic in tone.

‘During the ordinary clasp Harry’s knuckles appear to have whitened to suggest he is holding his wife tight and their other clasp involves the entwined, meshed fingers that show a desire for intense closeness.

‘And of course there is also Meghan’s signature validation ritual in both the hand clasp and the date-night arm around her shoulder that she has used since their engagement photos, where she places her free hand over Harry’s to add to the intensity of the clasp or gesture.’ 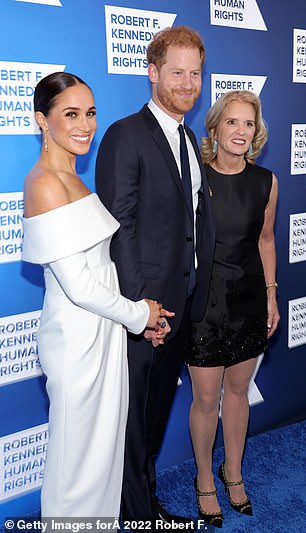 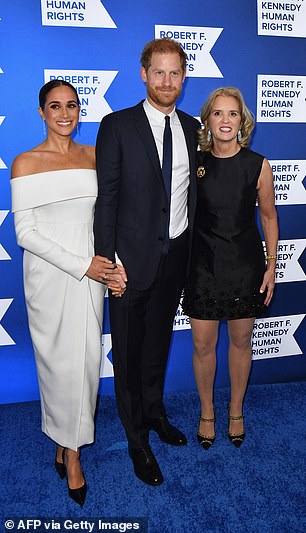 However there did appear to be moments where the Duke appeared a little less sure, according to the body language expert.

She said: ‘It might be interesting to see how Harry is dealing with the kind of crowd crushes, constant touching and close-up filming by iPhone cameras that he would never have experienced as a royal.

‘There are three responses here: He does try working the crowds with enthusiasm, using touch rituals himself and posing for group photos with his arms around the hosts.

‘He also seems to enjoy the networking, stopping to talk to people along the route but it’s Meghan twice placing a hand on his back in what looks like a signal to keep moving as she is getting told to do the same behind him.’ 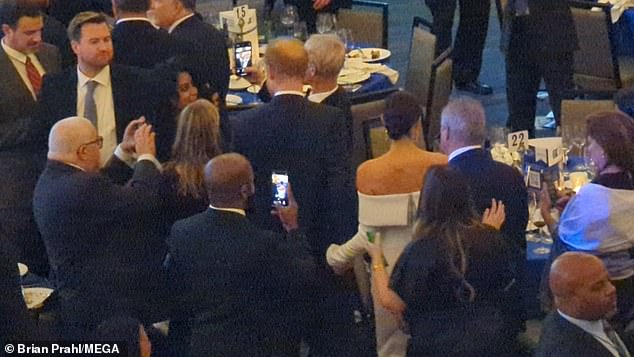 Judi explained the experience of being in a crowd with ‘constant touching’ and ‘close up filming’ would be new to Harry, and something he ‘never experienced as a senior royal 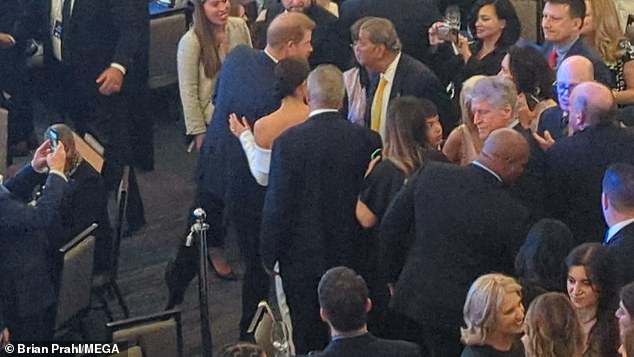 While the body language expert said Harry seemed to ‘enjoy the networking’ and ‘stopped to talk to people along the route’, Meghan steered him forward by placing a hand on his back

She continued: ‘There are some potential signs of discomfort at the table as he moves about in his seat and seems to be trying to re-boot his control, stopping a member of the staff or team to ask for something but sitting still when his food is served during one of the important addresses.

‘His signals suggest feelings of keenness and a desire to socialize by several touch rituals and the acceptance of touch approaches with a slight air of caution at being placed in crowd and proximity positions he might not have experienced as a royal.’

Seated alongside Meghan onstage, Harry discussed the importance of storytelling, saying ‘ultimately we live in this world now where sharing experiences and sharing stories has an enormous impact,’ adding it was important to undertake ‘if you are in a position of influence, leadership, or otherwise.’

The couple were attending the gala – an event for which tickets were being sold for up to $1 million each – to accept the human rights award from the Robert F. Kennedy Human Rights Foundation, a prize that counts Barack Obama and Hillary Clinton among its former recipients. Onstage they were interviewed by Kerry Kennedy, president of the foundation and daughter of its namesake.

while Meghan and Harry happily beamed for a few photos, they refused to answer any questions from press – ignoring all inquiries about their upcoming Netflix documentary or whether they had a message to send to the Royal Family.

Once inside the gala, the pair were seated at a dinner – where they continued to put on a very affectionate display, with images capturing Harry with his arm around his wife in a tender display. 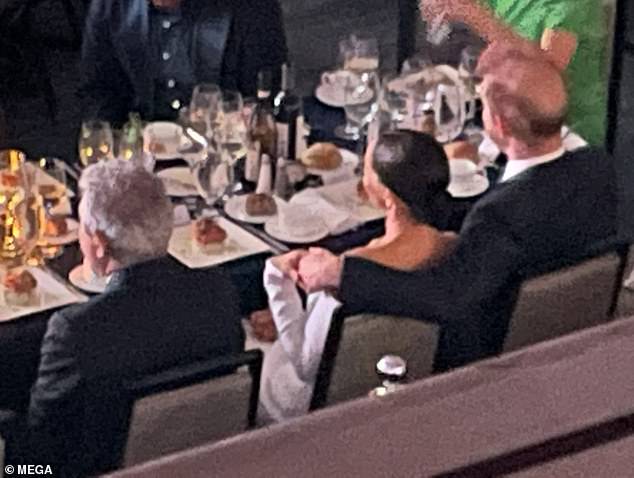 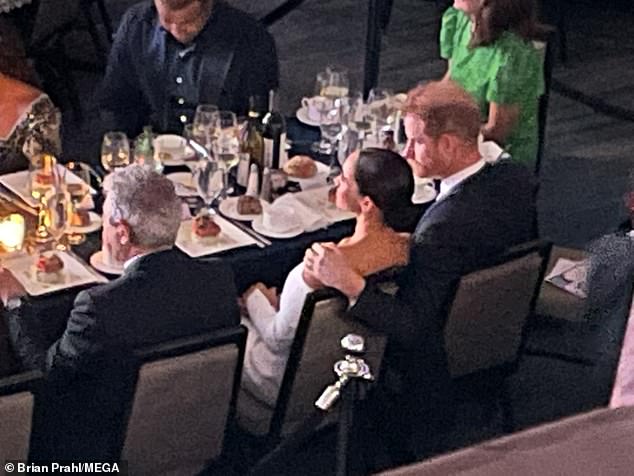 During the dinner, the Duke placed his arm around Meghan and his hand onto her bare shoulder (pictured)

Throughout the dinner, humanitarian awards were being given out to the chosen recipients – including Meghan and Harry who were being honored for their stance against ‘structural racism’ in the Royal Family.

RFK’s daughter Kerry Kennedy revealed last month that she had chosen to honor Harry and Meghan for taking a ‘heroic’ stance against ‘structural racism’ in the Monarchy – comments that likely only served to drive an even bigger wedge between the Sussexes and the Monarchy.

News that the pair were set to be awarded the honor by the RFK Foundation, which is run by Kerry, ex-wife of disgraced former New York Governor Andrew Cuomo, initially sparked bewilderment, even from within the Kennedy clan.

Her brother, RFK Jr., admitted to DailyMail.com that he was left ‘baffled’ by the decision, saying: ‘It’s a bewildering choice but still an encouraging step up from 2020,’ referring to Anthony Fauci, who won the award two years ago.

However, any confusion over the decision to present the couple with the humanitarian award quickly turned to shock when Kerry, 63, told Spanish news site El Confidencial that she had chosen to honor Harry and Meghan for their ‘heroic’ stance against the ‘structural racism’ of the Monarchy.

‘They went to the oldest institution in UK history and told them what they were doing wrong, that they couldn’t have structural racism within the institution; that they could not maintain a misunderstanding about mental health,’ she said.

No doubt her remarks will do little to heal the ever-widening rift between the Sussexes and the Royal Family – particularly as they came just days before the couple released the first of two bombshell trailers for their upcoming Netflix docuseries both of which hinted that the pair will launch a fresh barrage of attacks on the Monarchy.