Prince Harry today revealed that the Queen was ‘sad’ about Megxit but hinted she was unable to act to stop it due to his brother and father and the institution she led for 70 years.

The Duke of Sussex was speaking to Good Morning America in the latest leg of his transatlantic TV blitz promoting his new memoir ‘Spare’, due for release tomorrow.

GMA anchor Michael Strahan asked his if Her Majesty, who died in September aged 96, was ‘upset at you’ for walking away from royal duties with his American wife Meghan Markle in early 2020.

Harry replied that she was ‘sad’ about what happened, adding: ‘I had many, many conversations with her both in the UK over the years and in the run-up to the point of this change, so it was never a surprise to anybody, least of all her’.

But hinting she was sidelined, he said: ‘She knew what was going on. She knew how hard it was. I don’t know whether she was in a position to be able to change it.’

The Duke of Sussex was speaking to Good Morning America in the latest leg of his transatlantic TV blitz promoting his new memoir ‘Spare’, due for release tomorrow. He was speaking to Michael Strahan 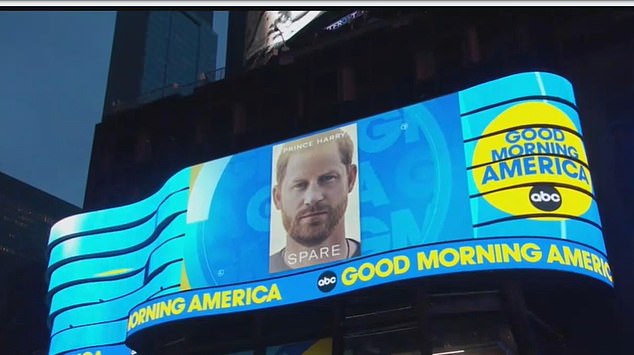 The Duke of Sussex claimed in his Netflix docuseries that the late monarch quietly watched as he was left terrified by Prince William yelling at the exit talks she had called after Harry and Meghan Markle’s decision to step back from their royal duties. 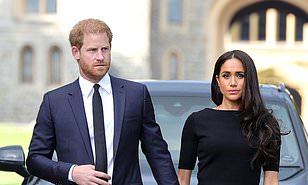 Do you think Harry and Meghan should be stripped of their royal titles?

He said: ‘It was terrifying to have my brother scream and shout at me, and my father say things that just simply weren’t true, and my grandmother, you know, quietly sit there, and sort of take it all in.’

But royal experts then said any suggestion that the ‘Queen was sidelined’ at the now notorious ‘Sandringham Summit’ is ‘complete nonsense’.

Mr Strahan, a former NFL star earning $17million per year to host the US breakfast show on ABC, is the latest broadcaster to sit down with the exiled prince, who appeared on ITV in the UK last night and on 60 Minutes in the US hours later in a string of pre-recorded interviews.

Mr Strahan then said: ‘There are going to be people to say, be in or get out, because if you get out there’s no hypocrisy?’

Harry then said he ‘can’t ever get out’ of the royal family.

He said there had been no compromise over his half-in half-out hybrid plan to move to Canada but also still serve the Queen during the Megxit crisis in 2020.

Interviewer Michael Strahan asked: ‘There was no compromise with the family?’

Harry replied: ‘No – which was really sad because I still to this day believe that this was entirely possible.’

Strahan asked: ‘There are going to be people who say ‘Why don’t they either be in or get out, because if you get out there’s no hypocrisy’.’

Harry said: ‘I can’t ever get out and I’m incredibly aware of my position.

‘I’m incredibly grateful for the life that I’ve had and continue to live.

‘But there’s no version of me being ever able to get out of this. I was stunned that my family would allow security to be taken away, especially at the most vulnerable point for us.’

Asked about critics who say he has sold out his family, Harry says the only way he could protect his family was to correct mistruths, by writing the truth in one place.

‘I fully accept that writing a book is feeding the beast anyway,’ he adds.

Harry told CBS last night that his stepmother Camilla is ‘the villain’ and ‘dangerous’ – having ignored a plea from his father not to attack his wife.

But contradicting that, the Duke of Sussex told GMA that he does not view the Queen Consort as an ‘evil stepmother’.

He said: ‘I have a huge amount of compassion for her, you know, being the third person within my parents’ marriage.

‘She had a reputation, or an image, to rehabilitate.

‘Whatever conversations happened, whatever deals or trading was made right at the beginning, she was led to believe that that would be the best way of doing it.’

Asked about what his relationship with Camilla is like now, Harry said: ‘We haven’t spoken for a long time. I love every member of my family, despite the differences, so when I see her we’re perfectly pleasant with each other.

‘She’s my stepmother. I don’t look at her as an evil stepmother. I see someone who married into this institution and has done everything that she can to improve her own reputation and her own image for her own sake.’

Speaking of his fractured relationship with William, he said there has always been competition between him and his brother the Prince of Wales, and he has referred to the British press’ part in it.

Speaking on Good Morning America, Harry said: ‘They pitch the Waleses, which Kate and William are now, against the Sussexes, me and my wife.

Asked if he thought this then made the two women ‘go against each other’, he said yes ‘without question’.

But he also admitted that he has to take responsibility for his role in the breakdown of the relationship with his brother the Prince of Wales.

Asked on Good Morning America if he thinks he has any responsibility in the breakdown of the relationship, Harry replied: ‘Without question. Sure.

‘But what people don’t know is the efforts that I’ve gone to to resolve this privately, both with my brother and with my father.’