Prince Harry has revealed how his then-girlfriend Meghan Markle kneeled next to Princess Diana’s grave to ask for guidance.

Writing in his bombshell memoir Spare, which went on sale early in Spain yesterday, he recalled the first time visited Diana’s final resting place on the Althorp estate.

Harry described how they rowed out to the island where his mother is buried, on the 20th anniversary of her death.

After taking a moment to reflect by himself he sensed that Meghan also wanted to take a private moment.

‘When I returned, she was on her knees with her eyes closed and her palms flat against the stone,’ he said, adding that she’d told him she’d asked Diana for ‘clarity and guidance’.

Prince Harry, pictured with his wife Meghan on a walkabout in Windsor after the death of the Queen this year, has revealed they visited his mother Princess Diana’s grave on the 20th anniversary of her death

The visit would have taken place in August 2017, when the couple had been together for roughly a year.

The late Princess was laid to rest at her childhood home of Althorp House, Northamptonshire,in 1997, and the grave was re-dedicated by the Archbishop of Canterbury in 2017 ahead of the 20th anniversary of her death.

Earl Spencer inherited the family seat of Althorp estate after the death of his father in 1992 and lives there with his third wife, Karen, and their daughter Lady Charlotte.

Prince Harry has previously spoken about how much Meghan reminds him of his late mother.

In the couple’s bombshell Netflix series, released last month, he said: ‘So much of what Meghan is and how she is, is so similar to my mum.

Today saw fresh revelations from Harry emerge in a trailer for his interview with ITV’s Tom Bradby.

The Duke of Sussex described William’s ‘red mist’ in a fight over Meghan before admitting that he took cannabis, magic mushrooms and cocaine in another clip from his ITV interview, out on Sunday.

Harry also insisted to Mr Bradby that he wants reconciliation with his relatives, even though his memoir has damaged the King and plunged the Royal Family into its worst crisis since the death of his mother in 1997. 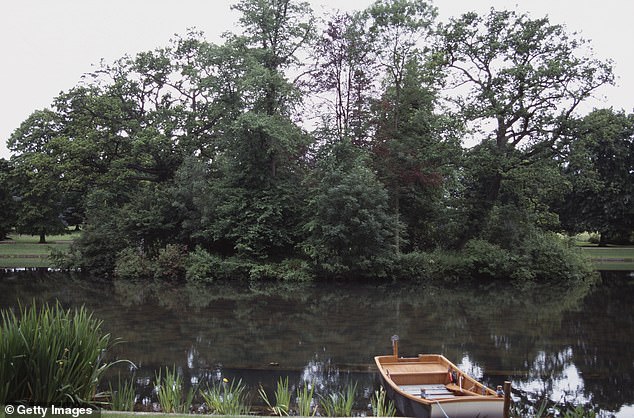 The island on the Althorp estate, Northamptonshire, where Diana, Princess of Wales, was laid to rest

And in a separate teaser released by Good Morning America last night, he admitted the rift with William would make their late mother ‘sad’.

Former Vanity Fair editor Tina Brown, a biographer of Princess Diana, said today: ‘Harry’s turned into a human hand grenade It’s raining down on the House of Windsor just at the start of his father’s reign’.

Buckingham Palace and Kensington Palace have declined to comment on anything Harry has said on TV or in his book.

‘It is exhausting, it is exasperating, but it is not distracting. It will burn itself out.’

Harry claimed the stand-up row in Nottingham Cottage – his Kensington Palace flat – ended with William grabbing him by the collar and throwing him to the floor, shattering a dog bowl. His back was scraped and bruised, he said.

‘He wanted me to hit him back, but I chose not to,’ he said of his brother. In the clip released early today, Harry said to Mr Bradby: ‘What was different here was the level of frustration, and I talk about the red mist that I had for so many years, and I saw this red mist in him.’

The short clip from the ITV interview, which is due to be broadcast on Sunday, also had Harry addressing the drug use detailed in Spare.

Mr Bradby said to the duke: ‘There’s a fair amount of drugs [in the book]. Marijuana, magic mushrooms, cocaine. I mean, that’s going to surprise people.’

Harry appeared to agree and says it was ‘important to acknowledge’.

The royal also stated he wants to reconcile with his family – something which he says cannot happen without ‘some accountability’.

‘I want reconciliation,’ he says, ‘but, first, there needs to be some accountability’. The duke also said: ‘The truth, supposedly, at the moment, has been there’s only one side of the story, right? But, there’s two sides to every story.’