Prince Harry, Meghan Markle and baby Archie have held a video call with the Queen to wish her a happy birthday – just days after a ‘vague discussion’ with her of their plans to boycott Britain’s most popular newspapers.

The Duke and Duchess of Sussex, who are thousands of miles away living in Los Angeles after quitting as working royals, spoke with the monarch, who is marking the occasion at Windsor Castle, away from her family, while the country is in lockdown.

Archie, who turns one in a fortnight, was with his parents as they delivered their birthday wishes to her just before tea time.

With the Sussexes eight hours behind because of the time difference between the west coast of America and the UK, they contacted the Queen later in the day.

A source told Vanity Fair that aides helped the monarch install Zoom on her iPad, and she had received messages and video calls all day which made her birthday ‘very special.’

Harry and Meghan did not post a public tribute to Her Majesty on their official SussexRoyal Instagram account – which has now been inactive for three weeks.

Reports yesterday said the Queen was due to have a Zoom call with the royal family together, but today the Palace refused to confirm who was on the call and added that any calls between the family would be ‘private’.

It comes just days after the couple decided to withdraw from all forms of co-operation from many of the country’s most popular titles, including the Daily Mail.

A source told The Times that Prince Harry called the Queen from his new home in Los Angeles at the weekend to discuss his plans – but ‘did not go into specific details’.

Prince William, Kate Middleton and Prince Charles led tributes to Her Majesty today, as the now 94-year-old celebrates an unconventional birthday in lockdown.

The Duke and Duchess of Sussex were joined by their 11-month-old son Archie Mountbatten-Windsor to speak to Her Majesty this afternoon, a spokesman for the couple has said 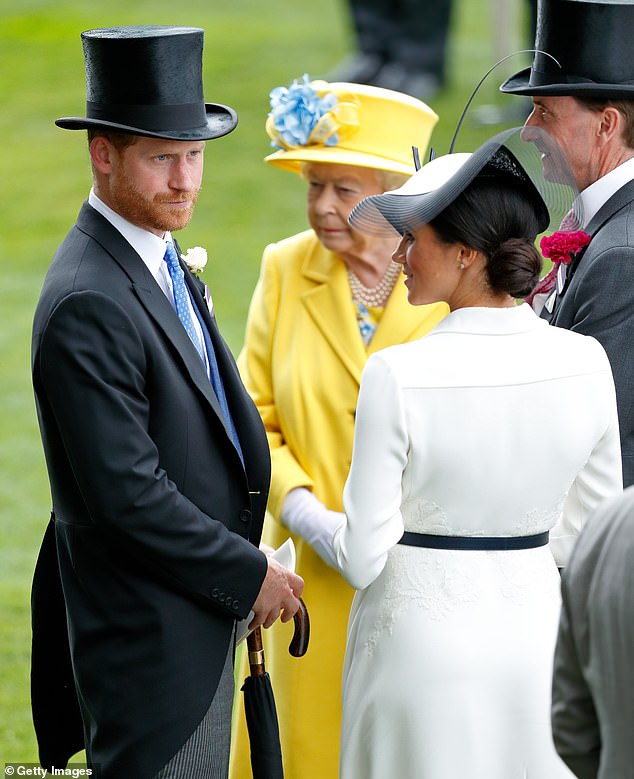 The Duke and Duchess of Sussex and Queen Elizabeth II attend the first day of Royal Ascot at Ascot Racecourse on June 19, 2018

Clarence House released four photographs of the Queen with Charles and his wife Camilla over the years, while Kensington Palace put out a picture of Kate and William with the monarch at the Chelsea Flower Show last May.

Captain Tom Moore wished the Queen a happy birthday from his Bedfordshire home as he was flooded with cards ahead of his centenary – and his daughter said her heart is ‘bursting’ over the £27million he has raised for the NHS.

Aides have been planning to set-up Zoom video calls to mark the celebration instead, allowing the Queen’s children, grandchildren and great-grandchildren to wish her a happy birthday.

With the UK in lockdown and thousands dead from the coronavirus outbreak, there will be no birthday gun salutes. The Queen decided the celebratory display of military firepower would not be ‘appropriate’ at this time. 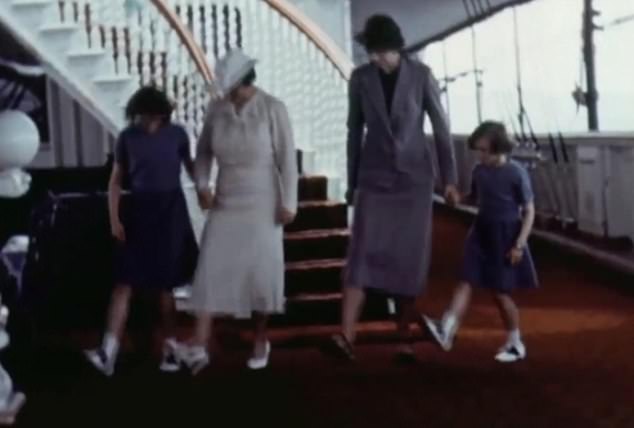 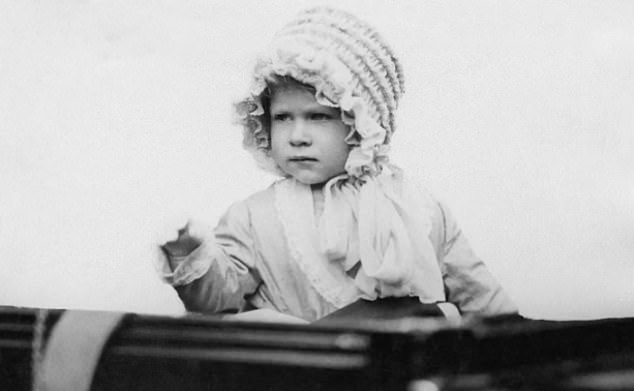 Touching archive film, from the Royal Collection Trust, shows the monarch as a child – released to mark her 94th birthday 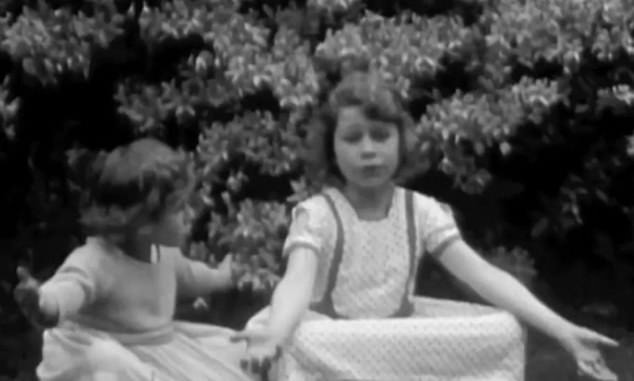 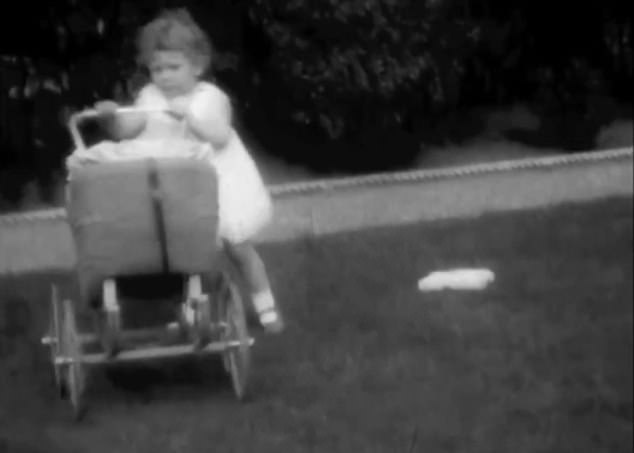 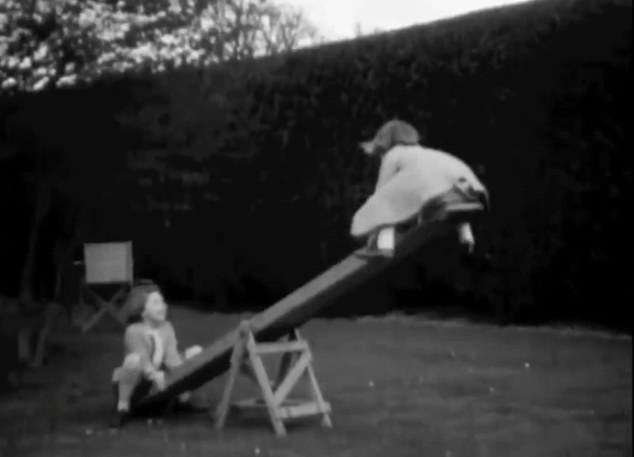 Elizabeth and Margaret play on a seesaw in a garden when they were young children, in one of the clips released today 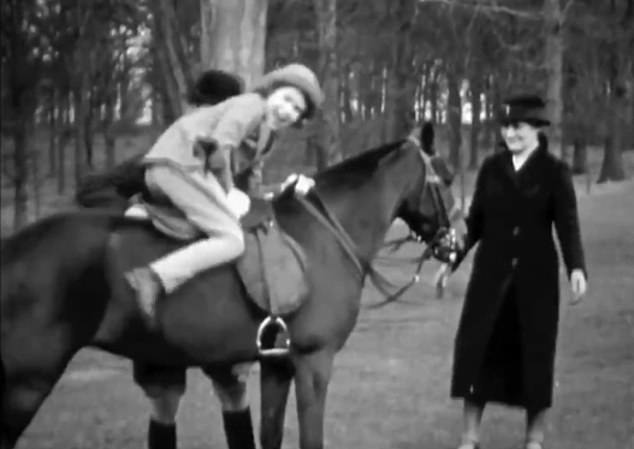 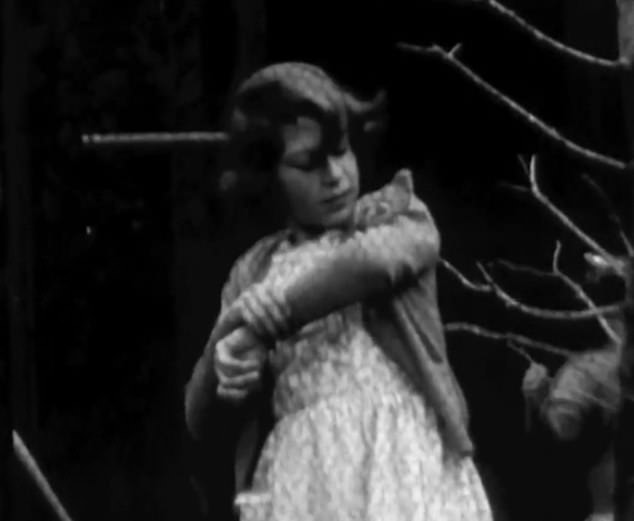 Usually a 21-gun salute is fired by the King’s Troop Royal Horse Artillery from either Hyde Park or Green Park, followed by a 62-gun salute at the Tower of London by the Honourable Artillery Company.

The Queen has two birthdays – the day she was born in April and her official one in June, which is celebrated with the Trooping the Colour ceremony, but this has been cancelled in its traditional form this year.

Kensington Palace wished the Queen a ‘very happy 94th Birthday’, and shared a picture of Prince William and Kate Middleton with the monarch at the Chelsea Flower Show.

The Prince of Wales and the Duchess of Cornwall’s Twitter account also sent its birthday wishes, with a collection of touching archive photos of Charles and his mother.

The royal family are, like the rest of the country, staying away from one another as they follow the social distancing rules amid the pandemic.

Philip, 98, made his first major public statement on Monday since he retired nearly three years ago, thanking key workers including refuse collectors and postal staff for keeping essential services running during the Covid-19 outbreak. 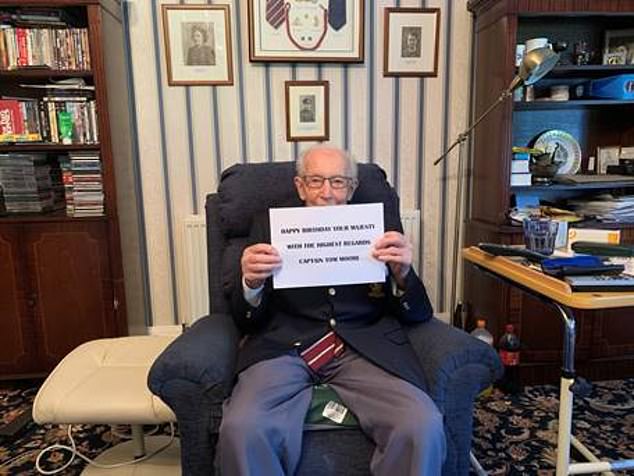 Captain Tom Moore wished the Queen a happy birthday from his Bedfordshire home as he was flooded with cards ahead of his centenary – and his daughter said her heart is ‘bursting’ over the £27million he has raised for the NHS. His message said:  ‘Happy Birthday your majesty. With the highest regards, Captain Tom Moore’ 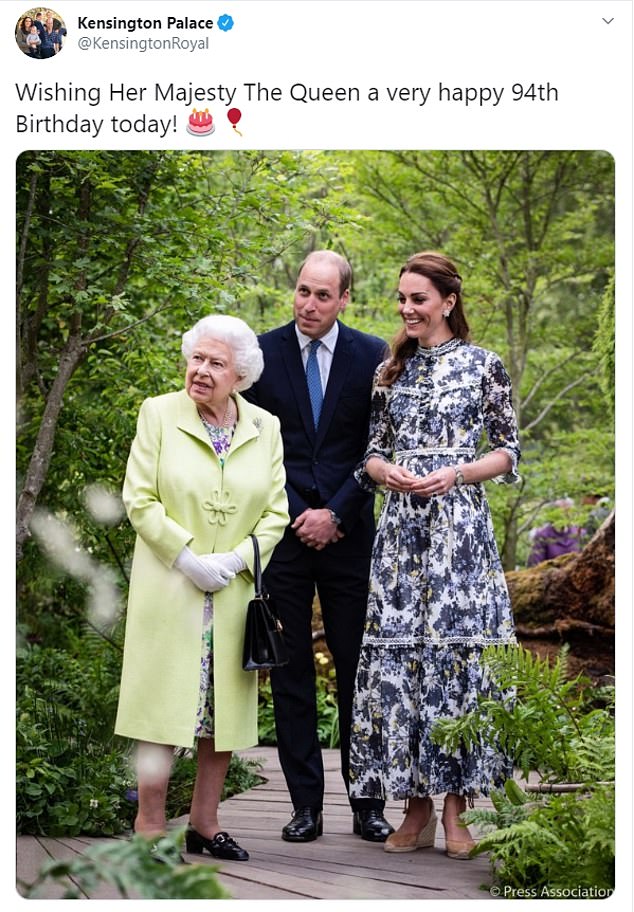 Kensington Palace wished the Queen a ‘very happy 94th Birthday’, and shared a picture of Prince William and Kate Middleton with the monarch at the Chelsea Flower Show 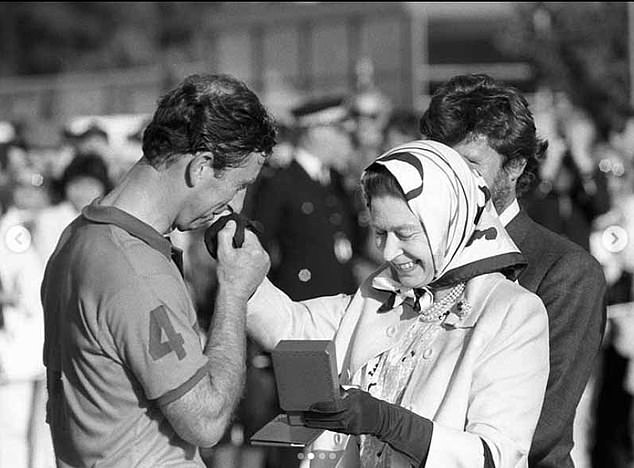 Prince Charles is presented with the runners-up prize by his mother, the Queen, following his team’s defeat in the Silver Jubilee Cup match against France at Windsor Great Park on July 24, 1988 (the image was shared as part of the Clarence House tribute this morning) 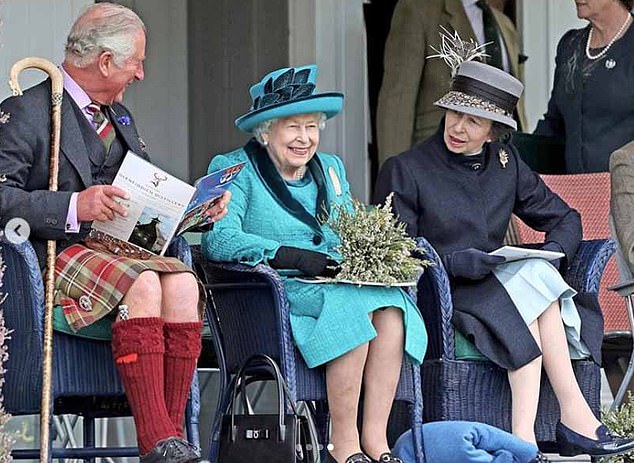 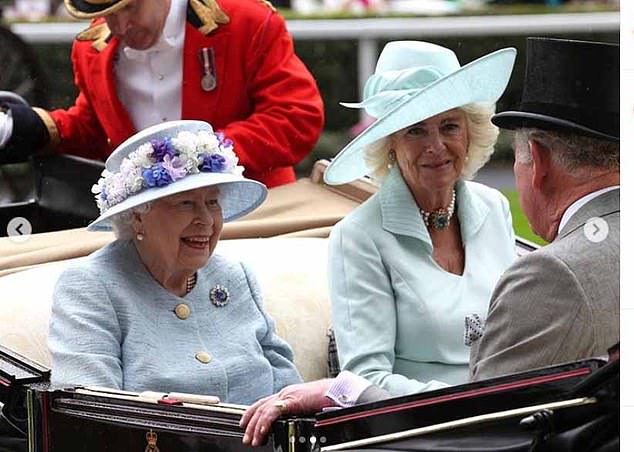 Clarence House shared a selection of images from across the monarch’s reign. Included among them was this image of Her Majesty and the Duchess of Cornwall at Royal Ascot last year 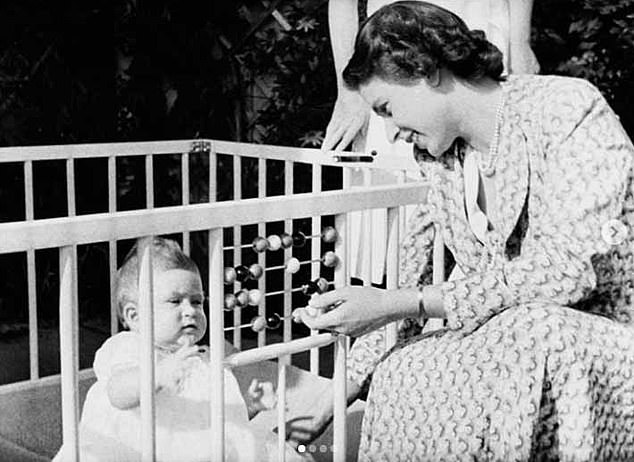 Queen Elizabeth II with her baby Prince Charles in the grounds of Windlesham Moor, country home in Surrey. The image was shared as part of the Clarence House tribute this morning 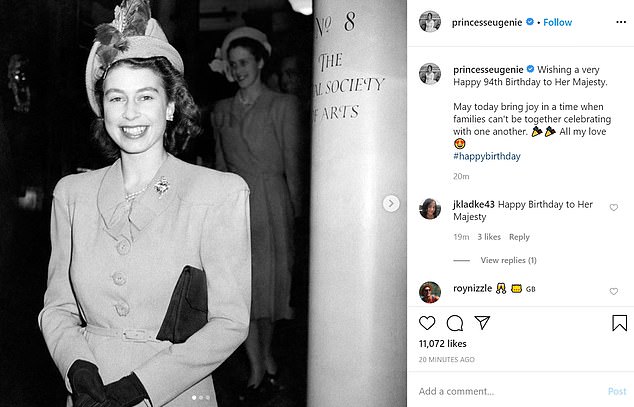 Princess Eugenie also wished the Queen (pictured at The Royal Society of Arts in her youth) best wishes on her birthday. She said: ‘May today bring joy in a time when families can’t be together celebrating with one another’

The couple’s eldest son the Prince of Wales, who has recovered from the Covid-19 illness, is at Birkhall in Aberdeenshire, Scotland, with the Duchess of Cornwall, while the Princess Royal, the Duke of York and the Earl of Wessex are all in their own separate homes around the country.

A Buckingham Palace source said the Queen’s birthday will not be marked in any special way, adding that any phone or video calls she has with family will be kept private.

The bells of Westminster Abbey – the church where the monarch was married and crowned – will also stay silent on her birthday for the first time in more than a decade.

The monarch has also said Government buildings will be exempt from flying flags if it creates a problem.

The abbey is currently closed, meaning the celebratory peal which has taken place in her honour on her actual birthday – April 21 – every year since 2007, will not be able to go ahead, the abbey told the PA news agency.

‘We are unable to ring our bells as the church is currently closed. So, it will be a virtual happy birthday this year via the abbey’s social media channels,’ a spokeswoman for the central London church said.