Prince Harry discussed ‘climate anxiety’ with psychiatrists and physicians in a ‘realizing a compassionate planet’ forum on Friday.

The Duke of Sussex, 37, who is currently living in his $14 million mansion in California having stepped back from royal duty last year, took part in the virtual discussion in conjunction with Archewell partner Stanford University.

A tweet shared by the Center for Compassion and Altruism Research and Education at Stanford University account read: ‘Prince Harry, The Duke of Sussex, welcomed Realising a Compassionate Planet delegates to a conversation related to climate health and mental health, facilitated by Dr. James Doty.’

In a second tweet, it posted: ‘Physicians, psychiatrists, and compassion scholars explored the nuances and meanings of climate anxiety, including Dr. Chitra Venkateswaran, founder of the Mehac Foundation, and Sally Weintrobe, British Psychoanalytical Society fellow.’

The appearance came days after Prince Harry and Meghan Markle pledged Archewell will go net zero by 2030, hours after the Queen didn’t mention her grandson the Duke in her intensely personal COP26 speech.

Prince Harry, 37, discussed ‘climate anxiety’ with psychiatrists and physicians as part in a ‘realizing a compassionate planet’ forum this weekend

Meanwhile a slideshow graphic shared by the university from the lecture featured phrases including: ‘Look at others as ourselves’ and ‘I believe it can be done, focus on the earth.’

Those who spoke at the event included psychoanalyst Sally Weintrobe and author of Awakening Compassion at Work Monica Worline.

Prince Harry and his wife Meghan Markle visited the prestigious Stanford University in Palo Alto, California in February 2020, weeks after announcing they planned to step back from royal duty.

At the time, it was reported  they attended ‘brainstorming sessions’ with several ‘professors and academics’ from the university, who have been helping them to work on the concept and creation of their new charitable organization.

The Duke of Sussex, 37, who is currently living in his $14 million mansion in California having stepped back from royal duty last year, took part in the virtual discussion in conjunction with Archewell partner Stanford University 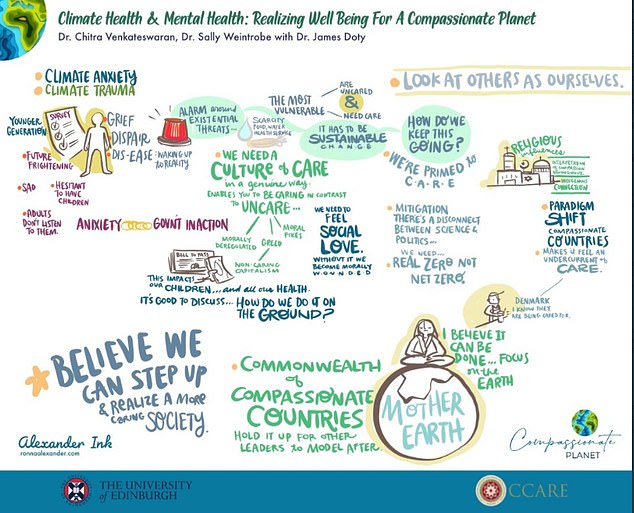 Meanwhile a slideshow graphic shared by the university from the lecture featured phrases including: ‘Look at others as ourselves’ and ‘I believe it can be done, focus on the earth.’

The Duke was joined by ‘physicians, psychiatrists and compassion scholars during the virtual meeting

Then in December, they announced the Center for Compassion and Altruism Research and Education at Stanford University would be one of the organisations supported through their Archewell foundation.

Announcing the partnership last year, they said they were investigating techniques for ‘developing compassion and promoting altruism within individuals and society’.

Last week, the Queen failed to mention Prince Harry in one of her most personal speeches ever at the opening of the global summit to discuss action on climate change.

Her Majesty addressed world leaders with a  powerful plea where she praised Prince Philip and gushed over Prince Charles and Prince William for carrying on her late husband’s work to protect ‘our fragile planet’.

Hours later, the Duke and Duchess shared a mission statement on their Archewell foundation website.

The couple will work with an ‘independent consultant to track all Archewell-related activities’ from inception to ‘understand our collective footprint’. 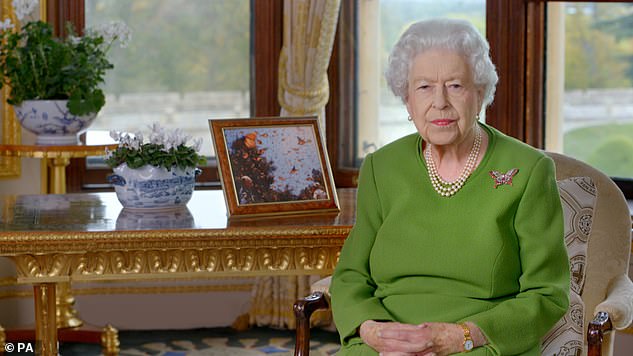 Posting on Archewell, Harry and Meghan commented that they have ‘actively made choices to offset and balance their carbon footprint’ but that ‘nearly every activity in daily life results in the release of carbon into the atmosphere’.

They added that they will be looking at ‘what they eat’ and ‘how often they eat it’ as well as their commute and use of heating and electricity in order to cut down their footprint.

His latest appearance comes as royal experts demanded Prince Harry tears up his £112million Netflix deal and makes a stand over The Crown’s portrayal of Princess Diana.

Royal biographer Angela Levin criticised the Duke of Sussex for not ‘finding his voice’ over the streaming giant’s controversial portrayal of his mother.

It comes after Princess Diana’s friend Jemima Khan withdrew her support for The Crown over its ‘disrespectful’ script after she broke up with the show’s creator.

Levin, author of Harry: A Biography of a Prince, told The Sun: ‘Harry has remained absolutely silent about Netflix.

‘He should tear the deal up and make a stand for his mother. What’s more important? Money or defending his mum? It’s astonishing he can’t find his voice on this.’

It comes as another royal expert said today that the makers of Netflix’s The Crown have stuck up ‘two fingers’ at the Royal Family by casting the stepdaughter of IRA supporter Roy Greenslade in the role of Countess Mountbatten.

Penny Junor said Natascha McElhone, 51, was not responsible for the ‘sins of her stepfather’. But she said another actress should have been considered because of the role’s sensitive nature.