Prince Harry has broken his silence on his secret meeting with the Queen as he puts a positive spin on his visit by saying she would have ‘loved’ to be at the Invictus Games.

The Duke of Sussex said ‘it was great to see her’ during a quick stop-off before his arrival in the Netherlands for the competition.

The 37-year-old, who founded the event for wounded, injured and sick servicemen and women in 2014, said the 96-year-old monarch ‘had plenty of messages for Team UK’ when he met her at Windsor Castle last week.

He added he had passed these onto the team, telling the BBC: ‘So, it was great to see her and I’m sure she would love to be here if she could.’

There were reports Harry and his wife Meghan Markle had promised the Queen she would meet her great-grandchildren Archie and Lilibet ‘in the near future’ during the ‘very cordial’ secret meeting on Thursday.

The Duke of Sussex, who is currently staying in the Netherlands, where the games are taking place, said the competition would ‘not be the same’ without a team from Ukraine

According to the Mirror, senior royal sources described the meeting as ‘very cordial’ and ‘incredibly warm and good natured’.

Harry and Meghan reportedly opened the door to return from the US for the Queen’s Platinum Jubilee celebrations, and told her of their plans to visit again so she can spend time with the children.

One royal biographer has claimed the meeting was a way for Prince Harry to ‘slowly starting to rebuild some bridges’ with his father.

The latest details about the meeting comes as he praised the ‘extraordinary’ commitment of Ukrainians taking part in his Invictus Games, in spite of Russia’s invasion of their homeland.

He said said the competition would ‘not be the same’ without a team from Ukraine.

The competition’s founder also revealed how four members of the Ukraine team had died while defending their country in the build up to the week-long sporting competition. 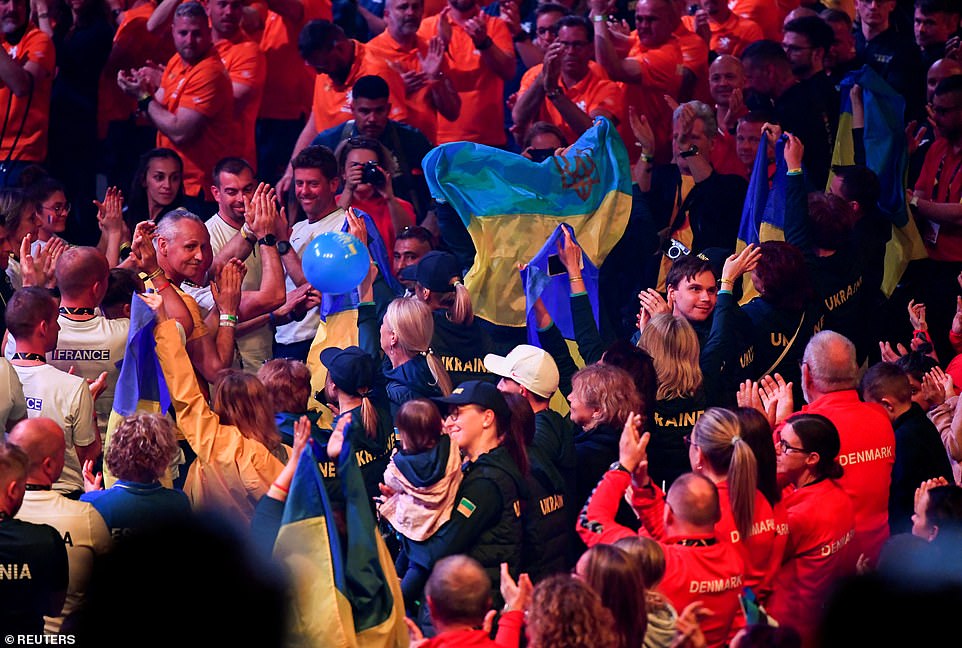 People applaud for Ukraine, as Russia’s invasion of the country continues, during the opening ceremony of the Invictus Games in The Hague

And he said news of their deaths ‘brings it home’ the scale and real-life consequences of the conflict in Ukraine.

Speaking to the BBC, he said: ‘I was struggling for 24 hours about what to say about Team Ukraine.

‘The whole world is definitely behind them, but again, is that enough. When you get to see and speak to them, and see in their eyes the experiences and the things they have seen, just in the last few weeks, it is really hard.

‘It is emotional to think that they all jumped in the bus, first of all they had to make the decision to come, then they jumped in the coach, probably slept all the way, and I think what people need to remember, or perhaps don’t even know yet, the vast majority of the Ukraine team were serving in some shape or form.

‘So they would remove their uniforms, put their team strips on, jumped on their coach, came over here, slept for a couple days, tried to decompress and then was straight into it. And they have to go back.

‘So I think to have them here is extraordinary, and that commitment they have made to leaving their country, which is a real hard thing for them to decide to do, but it came with their president’s blessing, and I don’t think this games could have been the games it is without Team Ukraine.’

Prince Harry also spoke about the tragic deaths of four Team Ukraine Invictus participants, who have been killed in the fighting with Russia.

His death was confirmed by Team Ukraine on social media.

Sydoruk was a former Invictus Games competitor in Toronto in 2017, where he won a silver medal, before transitioning into a coaching role.

An obituary to Sydoruk read: ‘It is with greatness we mourn his passing, who died this month defending his country… A brave Ukrainian patriot, gifted athlete and loving father, Dmytro was just 35 years old.’

Prior to the death of Sydoruk earlier this month, Invictus Games competitors Dmytro Oliynyk and Vladimir Motelchuk both died in rocket attacks on Mykolaiv on March 29.

Another team member, Sergey Smilin died in service on March 18.

Serhii Karaivan, a former trialist for the Invictus Games and Warrior Games for Team Ukraine, was also killed on March 13. Prior to the death of Sydoruk earlier this month, Invictus Games competitors Dmytro Oliynyk (L) and Vladimir Motelchuk (R) both died in rocket attacks on Mykolaiv on March 29. Another team member, Sergey Smilin (C) died in service on March 18. Serhii Karaivan, a former trialist for the Invictus Games and Warrior Games for Team Ukraine, lost his life in fighting on the 13th March

Speaking about their deaths, Prince Harry said: ‘And, of course, they (Team Ukraine) have lost now four members of their community. And one being their archery instructor who isn’t here, he didn’t make it – killed in action.

‘So I think it really just brings it home to what is really going on across Europe right now.

‘And we’ve got over 500 competitors here with various different stories and backgrounds, but ultimately we are all together in this.’

Invictus bosses had earlier released a statement on the deaths of Mr Oliynyk,  Mr Motelchuk and Mr Smilin last month.

In it, they said: ‘ Our thoughts are with their families, teammates and the wider community.

‘All were Warrior Games trialists and competitors, and whilst they were not preparing for the Invictus Games The Hague 2020, they were all extremely active in the international Invictus community on the We Are Invictus platform, competing in events over the past year including the virtual London Marathon, and online Rowing championships.

‘We encourage our community to continue to look out for one another online, as sad news continues to emerge, as many will have had the opportunity to compete alongside Team Ukraine virtually or in previous Invictus Games.’

Meanwhile, Oksana Horbach said in a statement following the news of Mr Karaivan’s death: ‘It was tough to learn about Serhii’s death as the fighting continues. ‘When we win, we will celebrate his life, talk about him, and his sense of humour, professionalism, patriotism and sports endeavours.

‘And we will hug and cry and laugh because the memories of him bring joy and happiness.

The Invictus Games is taking place at The Hague in the Netherlands this week, having kicked off on Saturday.

The event, which sees more than 500 participants from 17 different countries, is due to end on Friday.