A bidding war has broken out between UK broadcasters over rights to air the incendiary Oprah Winfrey interview with Prince Harry and Meghan Markle, with ITV reportedly emerging as the frontrunner for the programme.

The Duke and Duchess of Sussex are expected to be ‘very candid’ with their friend Oprah in the 90-minute CBS primetime special after last week announcing that they had officially quit the Royal Family.

It is understood that ViacomCBS Global Distribution Group, which will be selling the programme overseas, is keen for the interview to land on a free-to-air broadcaster to ensure a significant profile in the UK.

According to Variety, Comcast-owned Sky was out of the running while streaming giants Amazon Prime and Netflix – which has already signed a £112million deal with the Sussexes – are thought to not be involved.

The BBC is also not believed to be in the running, as it is instead airing the Queen’s annual Commonwealth Day message in a pre-recorded speech at Windsor on March 7 – just 24 hours before the Oprah interview is broadcast in the US.

Instead, ITV – whose journalist Tom Bradby famously asked Meghan if she was ‘okay’ as part of the broadcaster’s 2019 documentary Harry & Meghan: An African Journey – has reportedly emerged as the main contender. 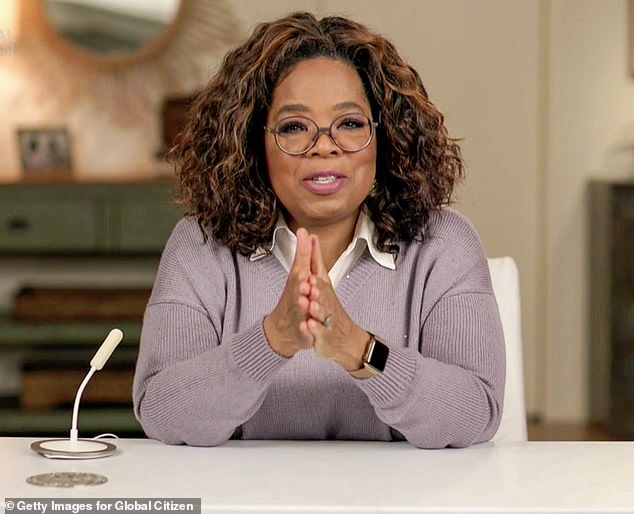 It is understood that ViacomCBS Global Distribution Group, which will be selling the programme overseas, is keen for the Oprah Winfrey interview to land on a free-to-air broadcaster to ensure a significant profile in the UK

A spokesperson for ITV declined to comment on reports that it had raced ahead in the bidding war among UK broadcasters.

BBC sources told Variety that the public broadcaster – which has launched an investigation into how BBC Panorama secured an interview with Harry’s mother Princess Diana in 1995 – is not involved in the process.

Other potential broadcasters include ViacomCBS-backed Channel 5, which airs some Royal content, and Channel 4, which aired an ‘Alternative Christmas Message’ from a deepfake of the Queen over the holidays.

The BBC, Sky and ViacomCBS have been approached comment.

It is not yet known how or when UK viewers will see the full Oprah interview, though clips of the 90-minute chat will be all over the international TV news and online media minutes after it is shown in America.

This week it emerged Harry and Meghan’s interview with Oprah may have to be re-edited or even partially re-shot due to the rift it has caused with the royal family and 99-year-old Prince Philip’s hospitalisation. 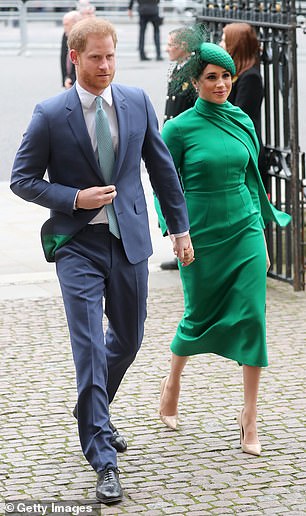 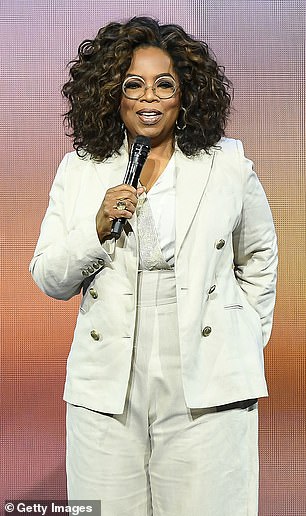 Harry and Meghan are said to be in shock because the Queen stripped them of their royal and sporting patronages after they ‘poured their hearts out’ to Oprah during a two-day shoot in their £11million LA mansion last week.

The tell-all interview is due to air on Sunday March 7 with no topics off-limits, with one source warning Harry’s family the show would be a good ‘time to hide behind the sofa at the palace’.

Oprah will first speak with Meghan about royal life, marriage, motherhood, her philanthropic work and how she handles life under the public eye, before being joined by Harry to discuss their move to the US and future goals.

Meghan is also expected to speak about the feud with her family on her father Thomas’ side after This Morning host Holly Willoughby said that Oprah’s team had been in contact with ITV for footage of an interview with her half-sister.

In the January 2020 broadcast Samantha Markle said the former Suits actress and Harry owed her and their father an apology for ‘incredibly wrong, untoward, and shocking’ behaviour after the royal wedding in 2018.

Ms Willoughby said: ‘Oprah Winfrey’s team contacted This Morning requesting footage from our interview with Samantha Markle in preparation for the interview with the Duchess of Sussex’.

She added: ‘So, we don’t know whether or not they used that in the interview, but what we do know is nothing was off limits.’

Has Oprah been wooing Prince Harry and Meghan Markle since their WEDDING? Princess Diana’s biographer Andrew Morton says TV doyenne was always going to be first choice for a ‘fireside confessional’

Morton, who wrote his own book on the Duchess of Sussex, Meghan: A Hollywood Princess in 2018, suggested that Oprah might have sensed the opportunity for a ‘fireside confessional’ as far back as their wedding in May 2018

Princess Diana’s biographer Andrew Morton says Oprah Winfrey has been dreaming of bagging a ‘fireside confessional’ with the Duke and Duchess of Sussex since she watched them walk down the aisle at St George’s Chapel in Windsor three years ago.

Morton, who famously penned Princess Diana’s blockbuster biography in 1992, says the television doyenne has been waiting in the wings for the ‘royal catch of the year’ – despite the couple’s proclamations that they were leaving public duty to live more private lives.

Now Prince Harry and Meghan Markle, who are expecting a second child together, appear ready to break their silence on the dramatic events of the last year, Morton says Oprah, a global star with stateswoman-like appeal, had already positioned herself to be the only choice to interview the pair.

Writing in a column for the Sun, Morton said: ‘As Oprah watched her walk down the aisle without her father, she could feel a fireside confessional coming on.’

He added: ‘It has taken nearly three years but she has finally landed the royal catch of the year with the first sit-down interview with Meg and a walk-on role for Harry.’

Prince Harry and Meghan Markle recorded their tell-all interview with the star on Wednesday and Thursday – just hours before the couple issued a parting shot after being stripped of roles and patronages by the Queen.

Morton, who wrote a book on the Duchess of Sussex, Meghan: A Hollywood Princess, in 2018, also took a punt on the first line of questioning that the couple might have faced during the interview at their Californian home.

He wrote: ‘Doubtless Oprah, whose interview will air in early March, will begin by asking about that big day. Then the killer follow up – ‘But your father wasn’t by your side.”