The Ty-Nant cat sanctuary near Port Talbot in South Wales is ‘a not-for-profit organisation that helps cats find loving homes’.

It also raised more money in 2020 than one of the most high-profile, A-list charities in the world.

So too did the Surrey And Hampshire Canal Society, the French Porcelain Society and the Hindley Amateur Rugby League Football Club — to name only a few with similar financial profiles that can be found in the Charity Commission’s records.

But that is not to say that these worthy — if somewhat niche — causes drew in millions of pounds of donations; they did not.

That is the American-registered charity that was incorporated in April 2020 and launched by Prince Harry and Meghan Markle in a blaze of publicity.

The Archewell Foundation is described on its own website as ‘an impact-driven non-profit created by the Duke and Duchess of Sussex.

‘Our core purpose is to uplift and unite communities — local and global, online and offline — one act of compassion at a time. We believe that compassion is the defining cultural force of the 21st century.’

Under the legal terms of Archewell’s incorporation it must be transparent and focus ‘on directing funds to existing charities and projects instead of starting its own’.

And who better to attract, stimulate, or even personally donate such funds than Harry and Meghan? One of Archewell’s own executive recruits has cited the couple’s ‘unparalleled global reach’.

Archewell was launched at a time of unprecedented need, as the then-new Covid-19 pandemic ripped across the globe. Charitable donations in the UK alone soared by £800 million in 2020 according to the Charities Aid Foundation. But the crisis also saw shortfalls in the sector.

Some 60 per cent of UK charities reported a drop in income. But that’s where other newfound fundraisers and philanthropists, like 11-year-old Max Woosey, stood up to be counted. 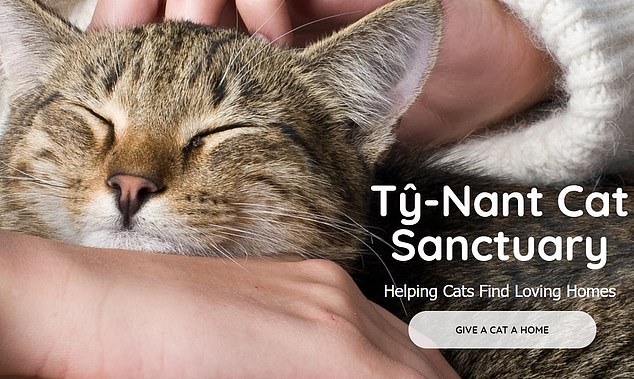 The Ty-Nant cat sanctuary near Port Talbot in South Wales is ‘a not-for-profit organisation that helps cats find loving homes’. It also raised more money in 2020 than one of the most high-profile, A-list charities in the world 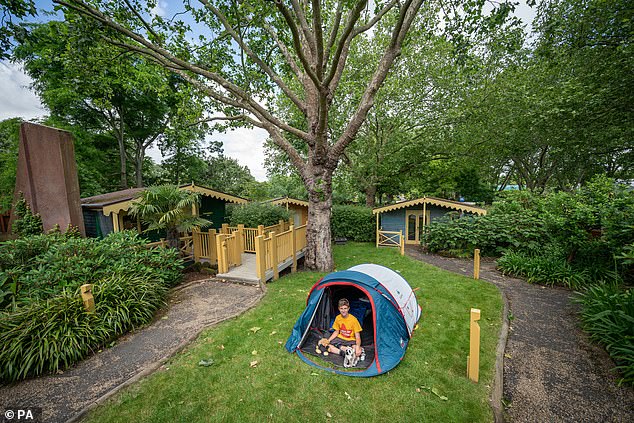 Some 60 per cent of UK charities reported a drop in income. But that’s where other newfound fundraisers and philanthropists, like 11-year-old Max Woosey, stood up to be counted

By sleeping in a tent in his back garden, little Max aimed to raise £100 for his local hospice in Devon which, he feared, would lose funding in lockdown.

What, then, of Archewell and Harry and Meghan’s ‘unparalleled’ global impact?

Between June 2020 and June 2021 the Sussexes’ previous, UK-based charity — which had to change its name from Sussex Royal to the MWX Foundation in 2020 after the couple stepped down from royal duties and ceased to be entitled to use the royal epithet — spent more than £42,000 in legal fees as part of its closure process.

The two charities collectively spent more on legal fees than they raised in profitable donations.

It ought to be noted that Archewell was not active during 2020, and only opened a bank account in January 2021, receiving its first deposit a month later. 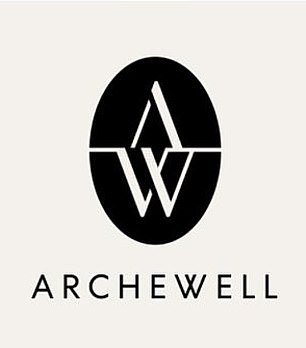 So while many other charities were going into overdrive as Covid spread across the world, Harry and Meghan’s much-trumpeted foundation was in limbo.

Sources close to the Sussexes said in June 2020 that the couple had delayed Archewell’s launch to focus on Black Lives Matter and the pandemic. So it is still admittedly early days.

The couple live in an £11 million home in Santa Barbara, California, have domestic staff and a large private security detail and enjoy travelling the world in private jets. This lifestyle does not come cheap.

In September 2020, the couple announced an extraordinary deal with the streaming giant Netflix. It was to be the first of a number of lucrative partnerships.

One is reminded of a particular exchange during the couple’s controversial TV interview with Oprah Winfrey last March.

Harry: ‘The Netflix and the Spotify, they’re all . . . that was never part of the plan.’

Oprah: ‘Because you didn’t have a plan?’

Harry: ‘We didn’t have a plan. That was suggested by somebody else by the point of where my family literally cut me off financially and I had to afford . . . afford security for us.’

Harry: ‘Yeah, in the first half, the first quarter of 2020. But I’ve got what my mum left me, and, without that, we would not have been able to do this.’

Living like millionaires? Or fundraising and philanthropy? The Mail has taken a look at the couple’s extensive commercial activities. When will these millions of pounds of deals translate into serious income in Archewell’s accounts?

Of all the lucrative deals the Sussexes have landed since moving to California, the biggest is the five-year contract with Netflix, widely reported to be $100 million (£74 million).

It is unclear whether the Duke and Duchess received an advance on the deal, similar to the arrangement Netflix had previously struck with Barack and Michelle Obama.

The offer was sufficient to tempt them away from rival broadcasters including Disney, Apple and NBC Universal, with whom the couple had been in talks.

Netflix boss Ted Sarandos gushed that his company was ‘incredibly proud that they have chosen to make Netflix their home’ — but programme announcements have been thin on the ground.

The couple say they are producing a documentary series, Heart Of Invictus, which will profile athletes and organisers as they prepare for the Invictus Games, the Paralympics-style event for wounded veterans which Prince Harry founded in 2014.

Meghan’s also said she’s developing an animated series. Provisionally titled Pearl, it is about a 12-year-old girl inspired by stories of influential women in history.

Online audio streaming company Spotify’s three-year podcasting deal with the Sussexes could be worth as much as £13 million, say industry sources.

The couple’s first — and only — podcast, a 35-minute Christmas special from their ‘Archewell Audio’ channel, came out in December 2020.

In it, they chatted to celebrity friends including Sir Elton John.

Archewell had planned for ‘a full-scale launch of shows’ in 2021.

Last July, it was revealed the Sussexes had signed a $25million (£18.5 million) four-book deal with publisher Penguin Random House that largely hinges on a potentially explosive Prince Harry autobiography, expected to be published towards the end of this year.

Harry spent a year working on it with a ghostwriter, and it will be an ‘intimate and heartfelt memoir’ in which ‘he will share, for the very first time, the definitive account of the experiences, adventures, losses, and life lessons that have helped shape him’.

The Duke has promised to give an ‘accurate and wholly truthful’ account of his life from childhood to fatherhood.

The eventual deal may be worth as much as £29 million.

It is feared that the books will reopen family wounds, perhaps with Harry’s views on the death of his mother and on Camilla Parker Bowles, or further clues as to the identity of the allegedly ‘racist’ relative who mused aloud about son Archie’s likely skin tone.

As for the third title, the Duchess is reportedly writing a ‘wellness-type’ health book. The subject of the fourth is not yet known.

Last June, the Duchess published The Bench, a children’s picture book about a father and a son.

The £12.99 book, also published by Penguin, was called bland by many critics but it made it to No 40 in the Amazon bestseller list.

It remains unclear whether the Duchess received an advance for the book (or whether any such money went to charity) but industry observers estimated that, considering the fierce competition in the publishing world for a deal with the Sussexes, she could have made £500,000 from it.

Harry was reportedly paid $1million (£740,000) to address a private summit for bankers JP Morgan in Miami in February 2020.

The couple later signed up with the New York-based Harry Walker Agency to drum up further speaking engagements.

The agency represents the Obamas and the Clintons, and is used to demanding ‘top dollar’ for its clients’ services.

After becoming a United Nations advocate for gender equality issues, Meghan joined a speakers’ agency and was able to charge $20,000 per appearance.

Jeff Jacobson, co-founder of Talent Bureau speaking agency, estimated — before the JP Morgan gig — that Prince Harry could make up to $500,000 per appearance.

The Sussexes’ friendship with Oprah has certainly opened revenue-raising doors for them.

However, her sympathetic handling of them was worth its weight in gold and couldn’t have provided a better springboard for them in the U.S., even eliciting support from the Biden White House.

Winfrey and Prince Harry also collaborated on The Me You Can’t See, a five-part documentary series about mental health aired on streaming service Apple TV+. The financial terms of the deal have not been revealed.

Chief executive Alexi Robichaux said the Duke would likely spend time at its San Francisco headquarters and appear at special company events. ‘It is a meaningful and meaty role,’ he insisted of the vaguely-defined post.

No details were released of how much he is being paid (a chief impact officer in a U.S. charity typically earns around £65,000 a year), but the Duke’s impact on BetterUp’s market valuation quickly became clear. It tripled.

Meghan has also shown that having the Sussex name attached to a brand is very good for business.

Demand for the products — a packet that makes 14 cups cost nearly £21 — soared after the news broke that Meghan was a fan, according to Clevr boss Hannah Mendoza.

Last month, accounts published at Companies House in London revealed that for the period ending June 30, 2021, it recorded a profit of only £11,538.

The news must be disappointing for the couple given that when their MWX Foundation, formerly Sussex Royal, was closed down, all money was transferred to Travalyst.

Transparency campaigners have attacked the decision to register the Archewell Foundation and the Sussexes’ associated companies in the eastern state of Delaware, despite it having been founded and based thousands of miles away in California.

Delaware is known as the ‘Switzerland of the U.S.’ for its lack of corporate transparency.

Registering a company in Delaware doesn’t require the disclosure of the identities of the owners and all financial information relating to the firm is kept confidential.

How much of the couple’s millions will go to Archewell’s good causes and how much to Chez Sussex remains to be seen. Last year, ‘sources close to Harry and Meghan’ said Archewell would begin in earnest ‘when the time is right’.

The next Archewell results will not be released until early 2023.

Until then, the Sussexes run the risk of appearing to be — on Archewell’s account sheets at least — gilded onlookers rather than charity big-hitters.

They certainly have a lot of catching up to do before they overtake the likes of the Ty-Nant cat sanctuary.