Prince Harry and Meghan Markle released their annual Christmas card last night, showing the couple with their 19-month son Archie while next to an impressive playhouse.

The miniature cottage, designed in a traditional British style, is thought to have been a custom commission and would have cost the Duke and Duchess of Sussex up to $7,000, toy specialists told FEMAIL.

Featuring a thatched roof and split stable doors, the playhouse has a ‘rustic British cottage effect’. Jamie Stanford, managing director at UK-based toy company Liberty Games added it has ‘English countryside vibes’ that wouldn’t look out of place in the grounds of one of the British royal residences.

Indeed the playhouse looks strikingly similar to the Wendy house the Queen was gifted on her sixth birthday by ‘the people of Wales’ that remains in the grounds of Windsor’s Royal Lodge for each generation of the royal family to use. Prince Charles grew up playing in the house and Princess Eugenie has spoken of her love for it.

Prince Harry and Meghan Markle released their annual Christmas card last night, showing the couple with their 19-month son Archie while next to an impressive playhouse 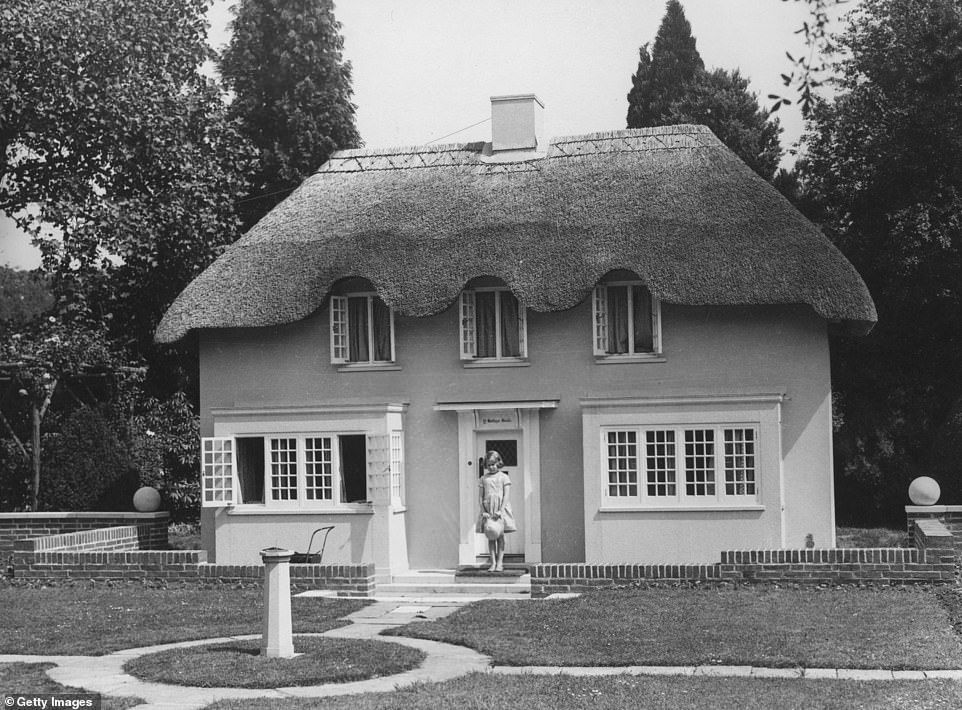 The playhouse featured in the card looks very similar to the one the Queen enjoyed as a little girl (pictured), gifted to her on her sixth birthday by ‘the people of Wales’, and still standing in the grounds of Windsor’s Royal Lodge for each generation of the royal family to use

Jamie Stanford, Managing Director at Liberty Games, said: ‘We believe Harry and Meghan’s is a custom-made playhouse, likely to cost in the range of $4,000 to $7,000.

‘In our opinion it looks like it’s been custom-made to create a rustic British cottage effect, complete with stable-style door, ornate roof ridge and of course some beautiful foliage. The wooden chair and paved path really add to this effect.

Meghan and Harry’s Christmas card created by a ‘skilled illustrator’

The card is a drawing of a photograph taken by Meghan’s mother Doria earlier this month.

While no creator has been credited, a graphic designer has told FEMAIL that the image must have been made by a ‘skilled illustrator’.

Anna D’Assaro said: ‘Having had a good look at the card and being an illustrator myself, I can say that it looks like this has been done manually from a skilled illustrator or an artist.

‘Taking a closer look at the image, you can notice how the shadow and highlights are all tiny little strokes which long ago would have been done by a paint brush.

‘Nowadays this can be done with Adobe Photoshop brushes or an iPad Pro and pen and you still wouldn’t notice a difference.

‘It is difficult for me to say if this has actually been painted on canvas with the use of acrylics and then digitized later on, or if this was entirely done digitally with the help of a pen and pad.

‘The dogs and scenario as well could have been shot individually even to then be edited all together to accomplish the perfect snap.’

‘If custom-made, the playhouse would have been the work of real specialists working to order to create something unique, which naturally makes for a higher price than “off-the-shelf” playhouse kits due to design time and manufacture time.

Meanwhile, Simon Winfield, Managing Director of Red Monkey Play, a playground equipment supplier based in the UK, placed the cost of the playhouse slightly lower.

‘If we were manufacturing a similar item and selling this, it would sell from a starting price of $3000 + vat for the playhouse itself,’ he said. ‘If we delivered to the location and installed, that would be an additional $500 so total cost I would say $3500 + vat.

‘The design has features almost like a thatched cottage roof which is a nod to the British countryside. The colour schemes are also red, white and blue in this particular picture.’

The playhouse was reminiscent of Her Majesty’s The Little House, the miniature cottage in the grounds of Windsor’s Royal Lodge where the Queen played as a child.

The miniature thatched, whitewashed cottage is tucked away from public view in the south side of the gardens of Windsor’s Royal Lodge.

Called Y Bwthyn Bach, or The Little House, it has been a play den for the Queen and subsequent generations of her family for the past 88 years.

The two-thirds size cottage, which measures 24 feet long, eight feet deep and with five feet high rooms, was presented to Princess Elizabeth and her sister Margaret in March 1932 on behalf of ‘the people of Wales’ on the occasion of Elizabeth’s sixth birthday.

Designed by architect Edmund Willmott, who had earlier built a less grand little house for his own daughter to play in, it was intended as a symbol of the love and fascination of the Welsh people for the little princess who was, at that stage, never expected to become Queen.

Over the years, the Queen’s children have also played in the house as well as her grandchildren – most likely including Prince Harry – and her great-grandchildren.

It’s thought to hold a special place in the hearts of all the royal children, but Princess Beatrice was especially captivated by it and refurbished the build in 2012.

Prince Harry and Meghan’s Christmas card was their first since relocating to California, and showed off 19-month old Archie’s shock of red hair. 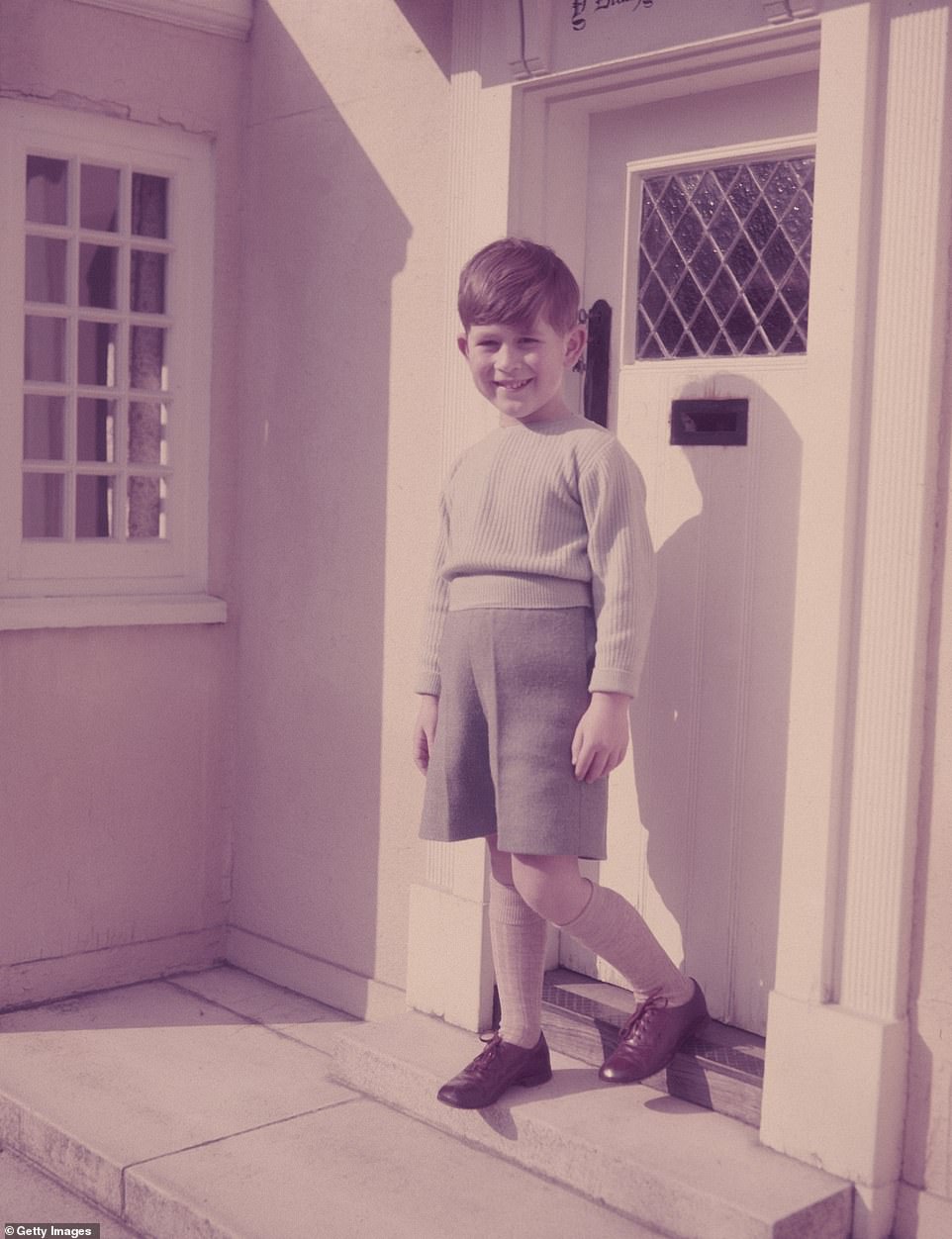 Prince Charles standing outside the Little Welsh cottage at the Royal Lodge in Windsor in England on April 7, 1954 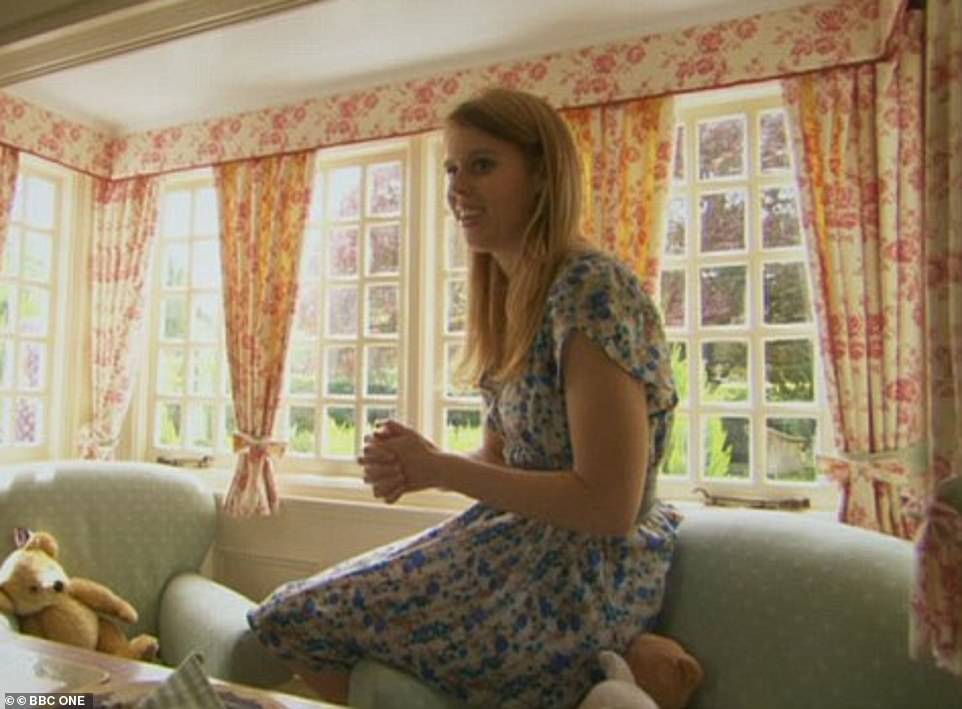 The Queen’s playhouse is thought to hold a special place in the hearts of all the royal children, but Princess Beatrice  (pictured) was especially captivated by it and refurbished the build in 2012

The couple can be seen playing with Archie in the garden of their £11million ($15million) home in Montecito, along with dogs Pula and Guy. The card is a drawing of a photograph taken by Meghan’s mother Doria earlier this month.

It was released via Mayhew, the London-based animal charity based for which 39-year-old Meghan is a patron and reads: ‘Wishing you a very Merry Christmas and a Happy New Year.’

A tiny Christmas tree in the picture is decorated with ornaments selected by Archie. The Mayhew tweeted the image yesterday along with a thank you for an undisclosed personal donation from the royals.

Meghan writes in it: ‘This year we, as a family, have made donations to several charities with you in mind. From a local California organisation that helps families transition out of homelessness, to two of our UK patronages: one that supports animal and community welfare, and the other, a memorial fund for a cherished friend that helps to educate children and fight poverty in Uganda, we have honoured their work on behalf of all of us.’ 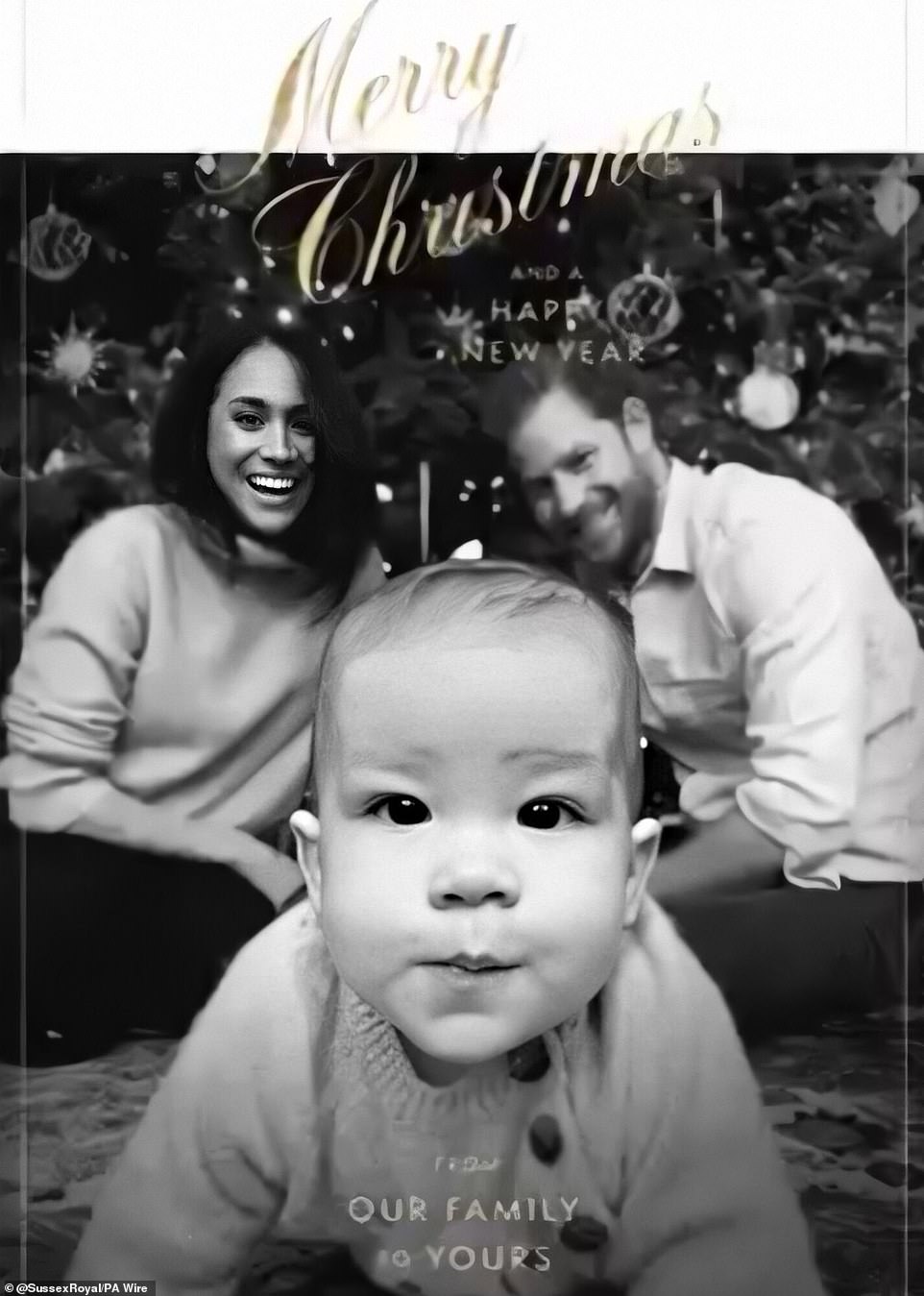 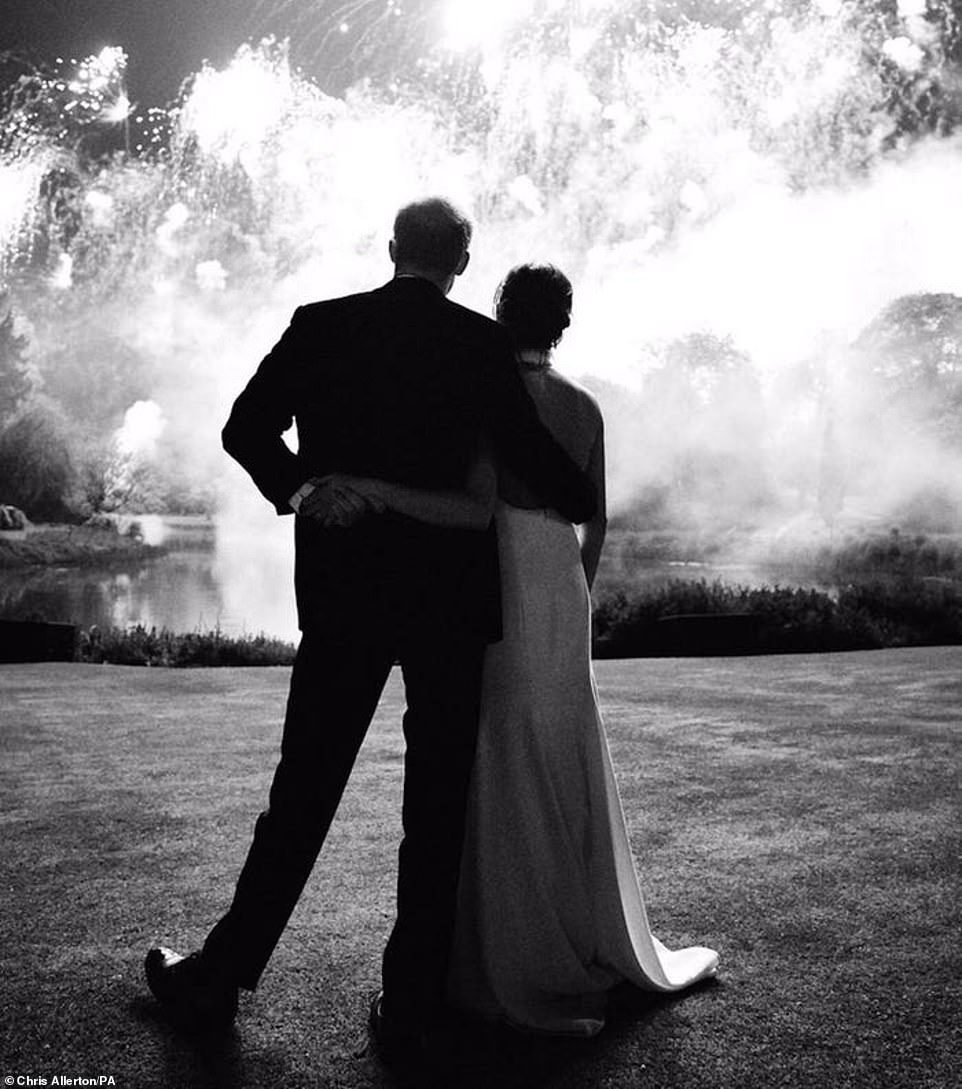 ‘The small Christmas tree, including the homemade ornaments and other decorations, were selected by Archie, and the tree will be replanted after the holidays.’

The card offers a sneak peek into the family’s home and Archie’s playhouse. A spokesman for the couple said: ‘The original photo of the family was taken at their home earlier this month by the Duchess’s mother.

Mayhew, which is based in Kensal Green, West London, said on its website that the money would help it ‘weather the ongoing impact of the Covid-19 pandemic and enable us to reach the animals and people who are struggling’.

Caroline Yates, Mayhew’s chief executive, said: ‘We are delighted to have the Duchess of Sussex as our patron, and she has shone a huge light on our community-based animal welfare work over the last two years.

‘We were especially honoured to recently receive a personal donation from the Duke and Duchess, which will enable us to help even more cats, dogs and pet owners in need over this tough winter period.’

Harry and Meghan relocated to Montecito after staying at Tyler Perry’s £13million ($18million) home with 12 bedrooms in Beverly Hills.

They enjoyed last Christmas in Canada after stepping down as senior royals and are understood to be spending this festive period with Doria in their new home.