Prince Harry and Meghan Markle planted forget-me-nots in honour of Princess Diana during a visit to a preschool in Los Angeles on the 23rd anniversary of her death yesterday.

The Duke, 35, and Duchess of Sussex, 39, are currently living in their $14 million mansion in Santa Barbara having officially stepped back from royal duty in March.

The couple could be seen digging with trowels into dirt and planting flowers as they visited the at risk children in Los Angeles, with Prince Harry and Meghan also planting forget-me-not-seeds in memory of Princess Diana.

According to the couple’s biographer Omid Scobie, the couple went on to play nursery rhymes in the garden with the youngsters and also spent time reading books about gardening and vegetables.’

Prince Harry and Meghan have reportedly previously volunteered at the centre with this visit coinciding with the anniversary of Princess Diana’s passing.

In the photographs, the couple, who wore masks during their visit, could be seen bending down into the soil as they carefully replanted the garden.

Meghan sat cross-legged and dug her hands into the soil as she helped children water plants at the preschool centre.

Meanwhile Prince Harry carefully depotted flowers and plants while speaking to the youngsters at the school.

Sharing images of their visit online, the Assistance League LA tweeted: ‘The children of our Preschool Learning Center got a wonderful surprise when The Duke and Duchess of Sussex visited yesterday.’

They continued: ‘In addition to helping the children replant the Preschool Learning Center’s garden, they spent time with them, sharing their appreciation for nature and helping to instill the importance of healthy eating.

‘We truly appreciate their time and care for our students.’

The couple made the visit on the 23rd anniversary of Prince Harry’s mother, Princess Diana’s, passing. 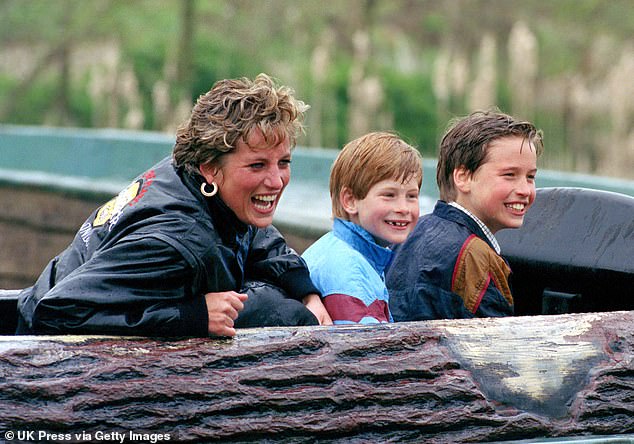 Princess Diana died at the age of 36 when the car she was travelling in crashed in a Paris tunnel on August 31, 1997.

The couple have frequently featured forget-me-nots at poignant moments in their lives as a nod to the royal, including on Meghan’s first mother’s day post in 2019.

Forget-me-nots also featured in Meghan’s bouquet on the couple’s wedding day, as a tribute to Harry’s late mother, who loved the small purple flowers.

The Duke hand-picked several flowers from their private garden at Kensington Palace a day ahead of the wedding. 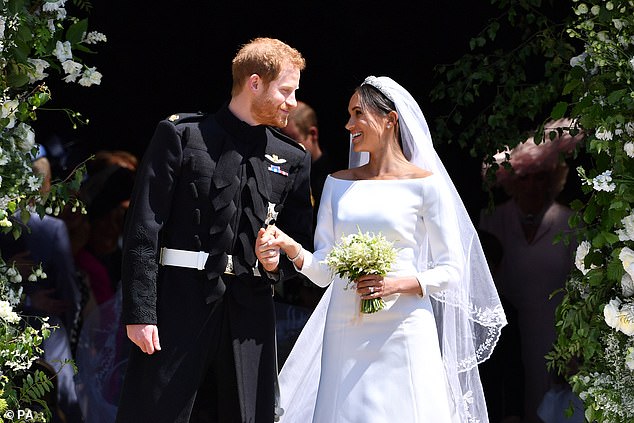 Prince Harry and Meghan have featured forget-me-not flowers in several poignant moments in their life, with the Duchess choosing the flowers to feature in her wedding bouquet as a tribute to Diana

It is also the meaning behind Sentebale, the charity set up by Harry in 2005 to help disadvantaged children in the southern African kingdom of Lesotho.

Their visit comes days after Prince Harry and Prince William revealed plans for a statue that was commissioned to mark the twentieth anniversary of Princess Diana’s death will now be installed at Kensington Palace next year.

A statement on behalf of the Duke of Sussex and Duke of Cambridge issued by Kensington Palace read: ‘The statue that Prince William and Prince Harry have commissioned to commemorate their mother, Diana, Princess of Wales, will be installed next year on what would have been her 60th birthday.’

It will be installed in the Sunken Garden of Kensington Palace on 1st July 2021, marking The Princess’s 60th birthday.

Days ago, Prince Harry said he is ‘loving’ his ‘fantastic’ new life in the US and said he wants to teach Archie how to play rugby in the garden of his $14 million mansion.

The Duke joined a virtual call alongside staff and volunteers from the Rugby Football League where he was asked by Ellery Hanley MBE if he is enjoying life in the US, to which he said: ‘Oh easy question. I am loving it. It’s fantastic.’

Meanwhile Prince Harry joked it is ‘impossible’ to get hold of any rugby balls in the states, saying: ‘What I need is a few mini rugby balls that I can get Archie involved with the game…I’ve got a little bit of space outside which we’re fortunate enough to have,’

He said: ‘I need to get him playing some rugby league, but I am unbelievably fortunate and grateful to have outdoor space and see my son outside as I know so many people haven’t had that chance in the last five months.’

The Duke went on to add: ‘Our little man is our number one priority and then our work is our second priority to play our part to make the world a better place.’ 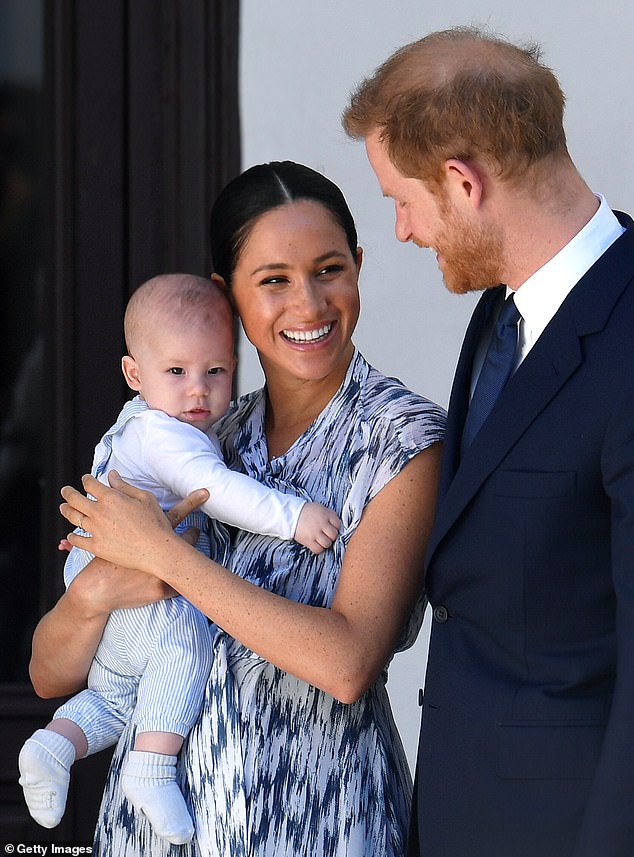 The royal joked it was ‘impossible’ to get hold of any rugby balls in the states, as he added he was ‘unbelievably fortunate’ to have space outside to see his son play. Harry, Meghan and Archie are pictured in South Africa last year 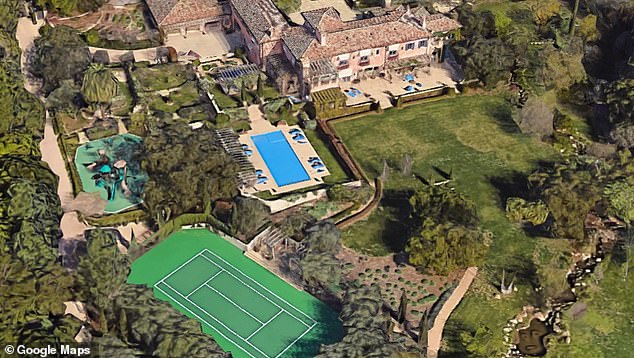 It emerged earlier this week that Prince Harry and Meghan are ‘likely’ to spend an ‘extended period of time in the UK next year’ in order to attend Trooping the Colour and the unveiling of the new Princess Diana statue.

Omid Scobie, co-author of bombshell biography Finding Freedom, said the Duke and Duchess had ‘many reasons to be based in the UK’ in the spring and summer of 2021.

Speaking on the Heirpod podcast, Omid said: ‘In March, we have the Invictus Games, which has been rescheduled, in the Hague. In June, we have Trooping the Colour, which I imagine Prince Harry and Meghan would like to still be at, and July 1, we have the unveiling of the [Princess Diana] statue.’

He added: ‘I would not be surprised if we saw the Sussexes spend an extended period of time in the UK next year.

‘There are many reasons for them to be based in the UK for that period, depending on whether travel will be back to normal.’ 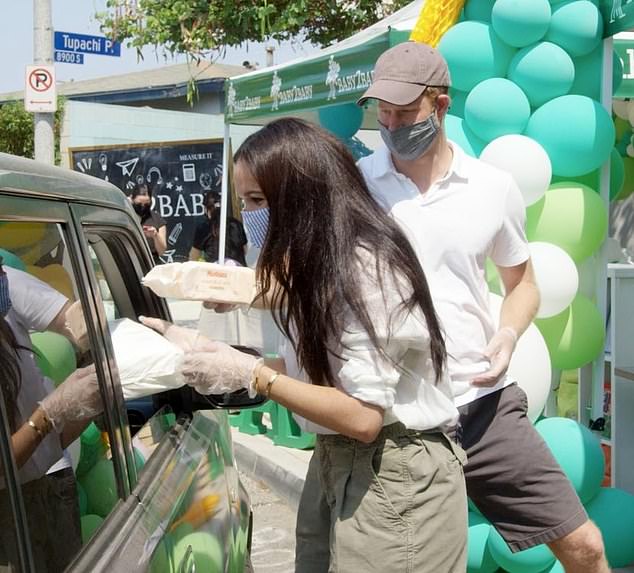