Prince Harry was last night accused of ‘jaw dropping hypocrisy’ after using a primetime interview promoting his bombshell memoirs to reveal he hopes any reconciliation with his family would be in private.

The Duke of Sussex made his plea despite having launched a media blitz on both sides of the Atlantic to promote ‘Spare’ and having just appeared on a tell-all Netflix docu-series with his wife, Meghan Markle.

There was disbelief when Harry told ITV’s Tom Bradby that whatever he says to William in future will remain ‘private’, despite using his memoirs, TV interviews, a Netflix documentary as well as an Oprah special to spill the beans on what his family said to him and Meghan behind closed doors.

The duke said: ‘I don’t know whether they’ll be watching this [interview] or not, but, what they have to say to me and what I have to say to them will be in private, and I hope it can stay that way.’

The Duke of Sussex made his plea for privacy despite having launched a media blitz on both sides of the Atlantic to promote ‘Spare’ and having just appeared on a tell-all Netflix docu-series with his wife, Meghan Markle

In a series of bombshells twisting the knife on his closest family members, Harry also claimed royals had sought to protect their own reputation ‘to the detriment’ of him and Meghan and they were ‘complicit’ in their ‘pain and suffering’.

He described a fractious relationship between his wife and Kate Middleton, while also addressing the rift with his brother and his sensational accusation towards Camilla of plotting to marry Charles.

Hundreds of royal fans took to social media to blast the duke’s bewildering plea for privacy after publicly airing several deeply personal rifts within his family.

Ex-BBC broadcaster Jon Sopel tweeted: ‘Please tell me I misheard this: “I hope what I say to my father and brother remains private”.’

Vanity Fair’s royal correspondent Katie Nicholl shared her thoughts in just two words in her own tweet: ‘The irony!’

Another person quipped online: ‘Private? Not a word in Harry’s vocabulary.’

One user tweeted: ‘Harry literally turning the British Monarchy into an episode of The Kardashian’s. This is cringe.’

Another said: ‘If you want communication with your family to be private, why are you doing this interview?! So contradictory.

A third added: ‘He wants any future conversation to stay private but is sitting here telling us what other “private” conversations they have had.’

Others pointed to the apparent hypocrisy of Harry’s request for privacy after years of public attacks on his kin.

One person wrote on Twitter: ‘What I have to say about them will be in private – besides the now multiple prime time interviews, the Netflix show and the book. Other than those yes, completely private’.

‘He’s actually said that he ‘hopes’ his family can respect HIS privacy whilst talking incessantly about THEM to the worlds press! KNOWING they cannot respond!’

It comes as Harry launched fresh ‘truth-bombs’ at the Royal Family during his latest media blitz for his memoir.

Mr Bradby was left visibly stunned – as were millions of viewers – by his screeching U-turn from previous incendiary claims that an unnamed senior royal had raised concerns over the colour of his son Archie’s skin.

Harry told Mr Bradby: ‘You speak to any other mixed race couple around the world, and you will probably find that the white side of the family have either openly discussed it, or secretly discussed “What are the kids gonna look like?”

‘And that is part of a bigger conversation that needs to be had.

He added: ‘The difference between racism and unconscious bias, the two things are different.

‘But once it’s been acknowledged, or pointed out to you as an individual, or as an institution, that you have unconscious bias, you therefore have an opportunity to learn and grow from that in order so that you are part of the solution rather than part of the problem.’

The broadcaster raised the 2021 Oprah interview with Meghan and said: ‘You accused members of your family of racism.’ But Harry snapped back: ‘No I didn’t. The British press said that’.

Appearing taken aback, Bradby asked: ‘Wouldn’t you describe that as essentially racist?’ Harry replied: ‘I wouldn’t, not having lived within that family.’

As he then tried to broach the subject of the fallout between William and Harry, Bradby put to him that his brother might have viewed the breakdown of their relationship differently.

There was disbelief when Harry told ITV’s Tom Bradby that whatever he says to William in future will remain ‘private’, despite using his memoirs, TV interviews, a Netflix documentary as well as an Oprah special to spill the beans on what his family said to him and Meghan behind closed doors

He said: ‘I think he would say he found you emotional, defensive, he couldn’t get through to you’, Harry retorted: ‘It’s quite a list of assumptions you’re making’.

In one particularly uncomfortable exchange, Bradby attempted to ask Harry about the part in his memoir where he details losing his virginity to an ‘older woman’ in a field behind a pub at the age of 27.

Bradby said: ‘I won’t spoil it, because there’s an awful lot of material in there. There’s you losing your virginity.’

Harry said: ‘It’s four lines or something, if that. We can talk about you losing your virginity if you want.’

Who is Tom Bradby? Friend of Harry’s who fell out with William

Bradby was born in Malta where his father served in the Royal Navy.

After a short time on the island his family moved back to Britain, and he was privately educated at £20,000-a-year Westbourne House School near Chichester before attending Sherborne School in Dorset.

The famous public school charges £42,000 a year for boarders. It was founded in 1550 but traces its history back more than 1,300 years, with alumni including actor Hugh Bonneville and WWII codebreaker Alan Turing.

Bradby boasts some impressive family connections, with his great-grandmother winning an Olympic gold for tennis in 1908, while his godfather, Matt Bradby, won two caps with the England rugby team in the early 1920s. 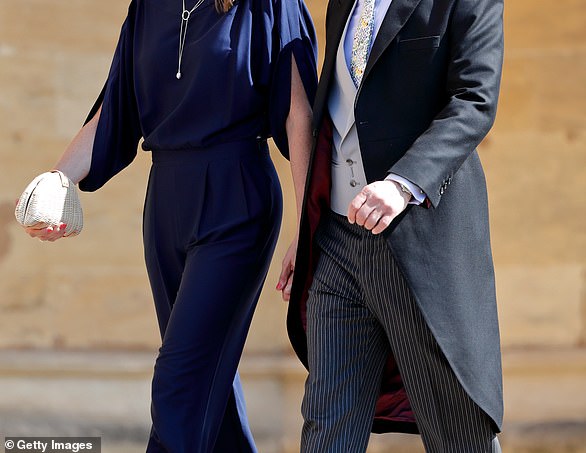 In a 2017 interview, Bradby paid tribute to his family including his mother, Sally, who was a tennis coach.

‘My father Dan was in the Navy and was an honourable man who strove to do the right thing,’ he said.

‘My mum, Sally, was a selfless force of nature. She died of cancer in 2012 aged 72 and my father was 83 when he died from a heart attack last year.’

As host of ITV’s News at 10 since 2015, Bradby is one of the UK’s most recognisable journalists. He joined ITN as an editorial trainee in 1980 and has worked as Ireland correspondent and Asia correspondent.

As royal correspondent, he presented coverage of the Golden Jubilee and the funerals of Princess Margaret and the Queen Mother. He has anchored major events including the Brexit referendum in 2016, the US election in 2020 and Queen Elizabeth II’s funeral.

Bradby also has a career as a fiction writer – publishing nine thrillers including Shadow Dancer, which in 2012 was made into a film. Despite his high profile in the UK, Bradby is less well known in America, and has joked about being mistaken on Twitter for the American football legend Tom Brady.

The journalist has been married to his jewellery designer wife Claudia since 1994 and they have three children, Jack, Louisa and Sam.

The journalist was signed off work for three months in 2018 after developing insomnia and what he describes as an addiction to the sleeping pill zopiclone.

Bradby told how Claudia had warned him he was close to a ‘very dangerous cliff-edge’ and urged him to see a psychiatrist. At his lowest he believed he would lose his family and job.’

Bradby is a friend of the Sussexes and previously interviewed them for a documentary about their 2019 South Africa tour. He famously asked Meghan about her mental health, with the duchess thanking him and saying ‘not many people have asked if I’m ok’.

In their recent Netflix series, Meghan said the interview marked a turning point. She said: ‘There is only so much you can take on your own, so you end up saying, ”Something has to change”. It was a huge turning point.

‘It was when we started having harder conversations about what needs to happen for us to be able to continue to make this work.’

Bradby first got to know Harry when he worked with him on a documentary about Lesotho when the prince was on his gap year after leaving Eton. The journalist went on to attend his 2018 wedding to Meghan. He also went to William and Kate’s wedding, but has since admitted his relationship with the Prince of Wales has suffered amid the fallout from Megxit.

Bradby has said mental breakdown made him treat Meghan and Harry more sympathetically.