Prince George has had a ‘trial day’ at a school close to Windsor that his parents, the Duke and Duchess of Cambridge, have been to visit half a dozen times.

William and Kate have been considering where their eldest son should continue his education and, as the Daily Mail reported yesterday, are also thinking about sending their other children, Princess Charlotte, six, and Prince Louis, four, to the same school.

According to a source close to the school – which The Mail on Sunday has decided not to identify – teachers arranged a settling in-style ‘trial class’ for the eight-year-old future King.

Teachers are understood to have been amused and relieved that the other children in the class did not recognise George or understand his status.

While the school has several children from wealthy European and Russian families, it is not as high profile as Ludgrove School in Berkshire, where William went, or Marlborough College, where Kate was schooled.

Prince George, pictured, second right, along with his parents the Duke and Duchess of Cambridge and his younger sister, Charlotte, left, may be moving to a new school in Windsor

He enrolled at Thomas’s School in Battersea, South London, in September 2017.

Meanwhile, officials are inviting punks to march on Buckingham Palace to help celebrate her Platinum Jubilee.

Organisers are urging volunteers young and old to take part in a street pageant reflecting each of the seven decades of the Queen’s reign.

It could see men in their 60s reaching to the back of their wardrobes for an old Sex Pistols T-shirt or Millennials recreating Adam Ant’s 1980s look complete with a white line across their face. 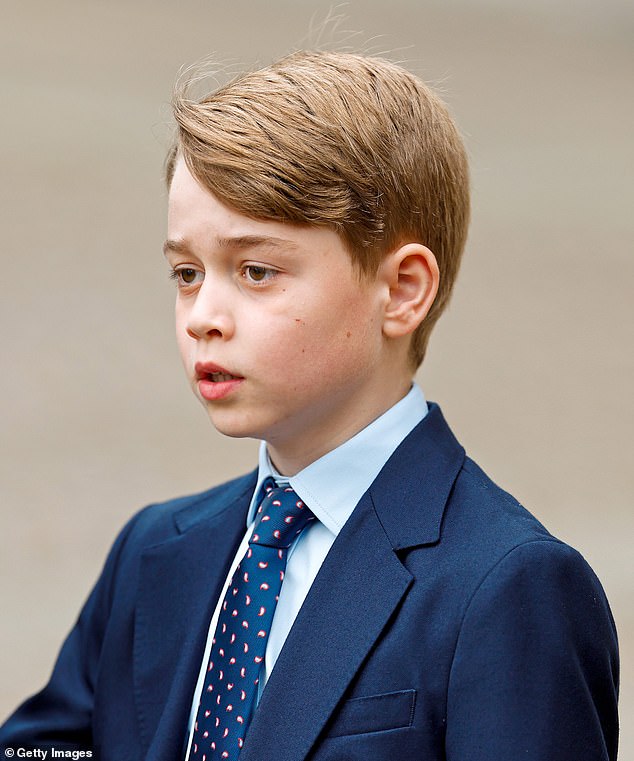 The event is being masterminded by award-winning designer Wayne Hemingway and aims to ‘represent and bring to life the subcultures that have emerged’ since the Queen ascended the Throne in 1952.

An advert calling for participants breaks down the ‘cast list’ for the 6,000-strong street party, held in London on Sunday, June 5.

For the 1950s, ‘Lambeth Walkers and Jivers’ are required; ‘Mods, Hippies and Rude Boys/Girls’ for the 1960s; while ‘Space Hoppers, Hula Hoopers, Punks and Glam Rockers’ are needed to represent the 1970s.

Thousands of volunteers have already come forward but more are needed. According to the organisers, those proving to be the most elusive are the ‘Goths and New Romantics’ of the 1980s and the ‘Acid Ravers, Britpoppers, Girl Power, Garage Heads and Indie Kids’ to represent the 1990s.

A source said: ‘We’ve had a lot of interest, particularly for those representing the 50s and 60s. It’s going to be a great party.

‘Someone from The Specials group is coming and is going to bring all his mates. But what we’re still really looking for are volunteers from the more recent years – the 1990s and 2000s.’

The street pageant will culminate in live gigs from well-known performers yet to be confirmed.

The deadline for volunteers has been pushed back to May 1 to gather as many ‘genuine fans’ of each era as possible.

The Jubilee festivities will be concentrated over a four-day bank holiday starting on Thursday, June 2.

By Rebecca English, Royal Editor for the Mail on Sunday

Standing on a Norfolk beach, cricket ball in hand, Prince Louis looks every bit the young sportsman in this picture released to mark his fourth birthday.

A series of delightful images of the fifth in line to the throne, dressed casually in shorts and a grey wool star-print jumper, were taken as usual by his mother, the Duchess of Cambridge, earlier this month.

Keen photographer Kate, 40, always knows how to get the best out of her children and the smile on her youngest child’s face shows that Louis is growing up to be a happy and contended little boy.

The pictures were released on his birthday yesterday, as the Daily Mail exclusively revealed how the youngster is set to join both his big brother, Prince George, eight, and sister, Princess Charlotte, six, at a new school this September. 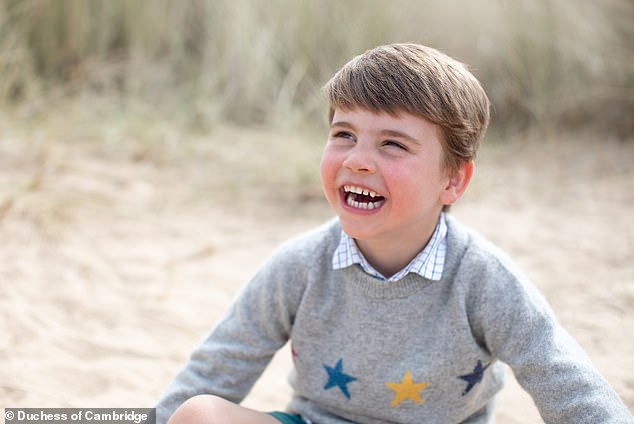 A series of delightful images of Prince Louis, dressed casually in shorts and a grey wool star-print jumper, were taken as usual by his mother 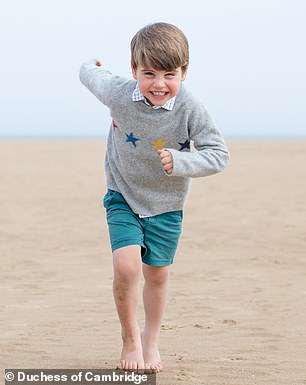 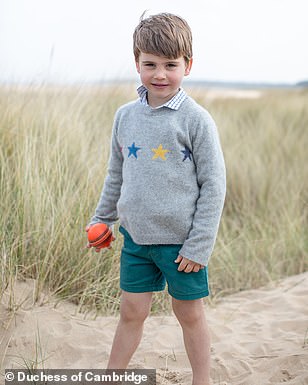 The pictures come as the Daily Mail can exclusively reveal the youngster is set to join both his big brother, Prince George, eight, and sister, Princess Charlotte, six, at a new school this September

Their parents, who are looking to move to Berkshire imminently, are currently exploring options to have all three of their children at the same co-educational establishment, it is understood.

Earlier this year the Mail revealed that William and Kate were ‘progressing rapidly’ with plans for a new life in the Home Counties. George is already earmarked to leave Thomas’s in Battersea, south-west London, for a new prep school in the royal county this autumn. But it has now emerged that he may be joined by Charlotte and Louis too.

Charlotte has always been ‘super happy and settled’ at Thomas’s and it had been thought that Louis would join her later this year.

In one photo, Louis flashes a cheeky grin as he races towards the camera. Two more show the prince, dressed in a star print jumper, blue check shirt and teal shorts, holding a cricket ball, perhaps suggesting he is already a budding young sportsman.

The fourth and final photo shows Louis giving another gap-toothed grin as he looks up at the sky – the picture of a happy and healthy little boy.

Royal fans will be delighted to see new photos of Louis after missed out on recent royal engagements attended by his big brother and sister.

George, eight, and Charlotte, six, joined their parents first at the Duke of Edinburgh’s Service of Thanksgiving, and then at Easter Sunday service, while Louis was left at home.

The windswept north Norfolk coast holds a special place in the Cambridges’ hearts. It is where the family can unwind together by climbing sand dunes, learning to sail, or taking a bracing dip in the sea.

William and Kate memorably released a video montage of their family, partly shot on a Norfolk beach, to mark their 10th wedding anniversary last year.

The Duchess of Cambridge often takes photos of her children to mark their birthdays. Last year she snapped Prince Louis on his training bike ahead of his first day at nursery.

His birthday will have come as a welcome joy and distraction for William, 39, and Kate, 40, who have faced questions this week about Prince Harry’s recent interviews with US media outlets.

In yet another controversial interview with a US broadcaster, the Duke of Sussex claimed on Wednesday one reason he flew to the UK last week to see his grandmother – for a supposedly private meeting – was because he wanted to make sure ‘she’s protected and got the right people around her’.

His controversial comment caused not just derision that it came from a man who has spent much of the last two-and-a-half years abroad and has caused his grandmother so much heartache, but also speculation as to who he could be referring to.

Harry is known to have a historical hatred for the so-called ‘men in grey suits’, the senior courtiers who advise the Queen.

Louis is currently enrolled at Willcocks Nursery in Kensington, only a few minutes from the family’s home of Kensington Palace, where Charlotte also went.

But it seems that, possibly for practical reasons, the Cambridges are now considering keeping all three children together.

The royal couple have been seen touring several schools in the area and are keen to find one that is out of town and where all the facilities are on one campus, the Mail understands from multiple sources.

The news also suggests that the family may be considering upping sticks out of London altogether for a new life in the country, using Kensington Palace and their home there, Apartment 1A, as a ‘work base’.

They intend to keep the palace on even after they become Prince and Princess of Wales. 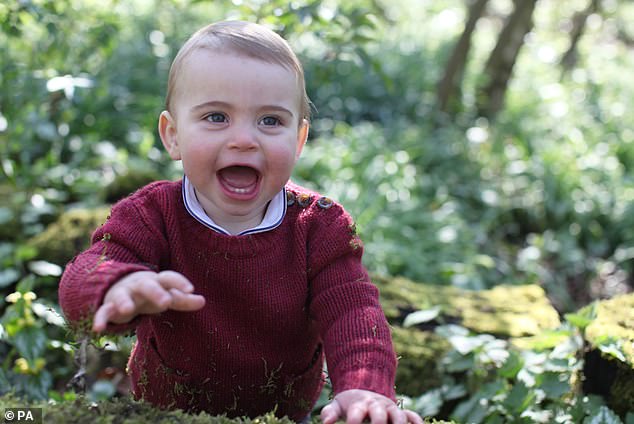 The series of pictures have come as the latest release of Kate’s photos – which usually come on her children’s birthdays. Pictured: Prince Louis, aged one 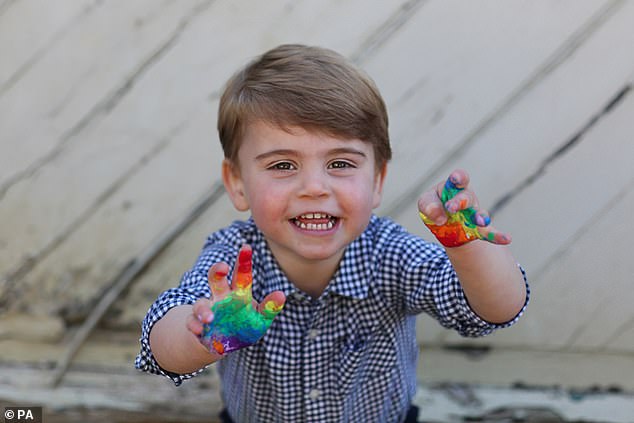 Kate has always had an ability to garner a smile out of her children in her photographs – and Louis is no exception. Pictured: Prince Louis, aged two 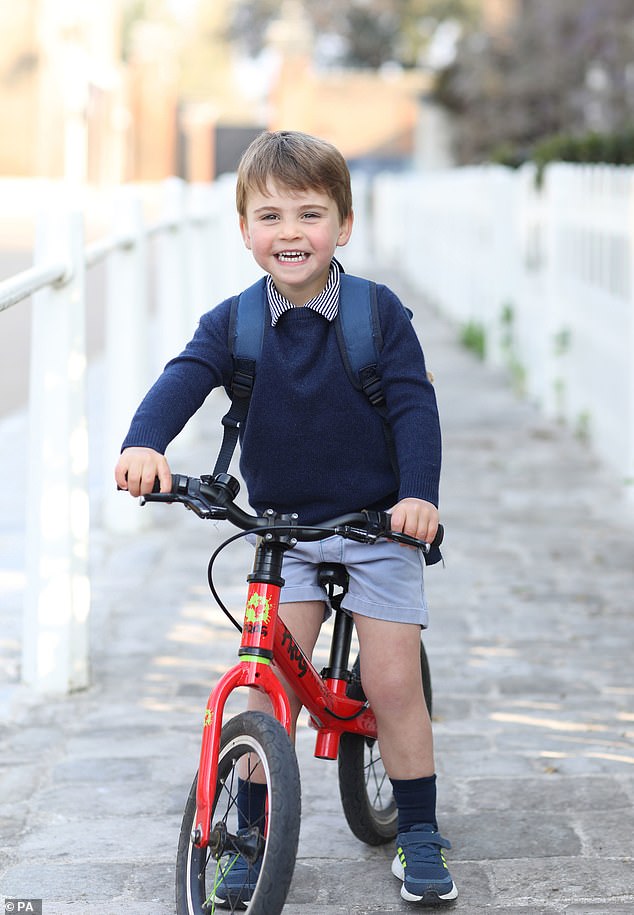 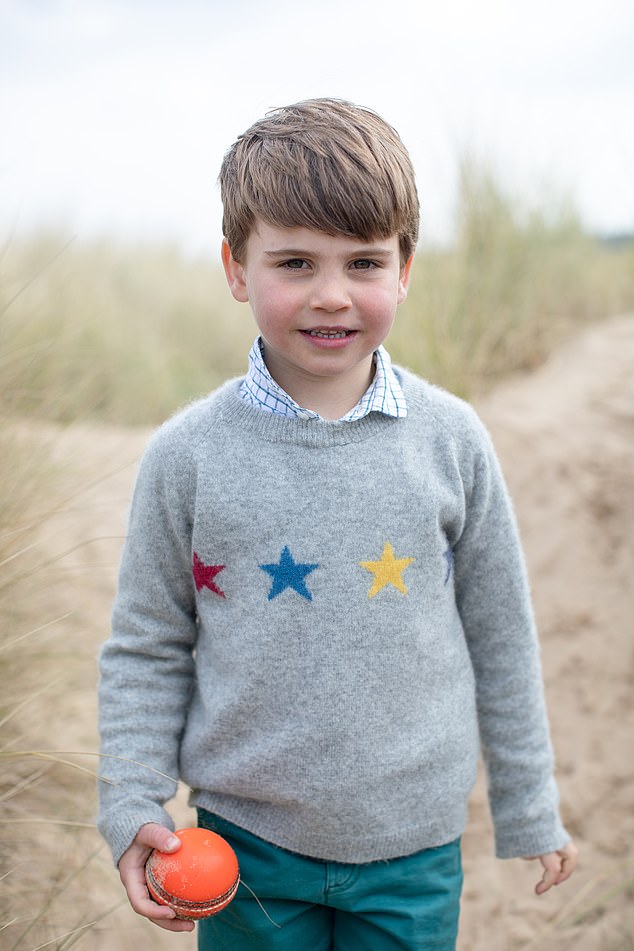 In fact the Mail can reveal that William, 39, and Kate, 40, have recently been looking at large private homes in the Berkshire area, specifically in villages close to her parents’ home in Bucklebury, as well as more well-publicised homes on the Queen’s Windsor estate.

Kate is extremely close to her parents, Michael and Carole Middleton, who often look after her brood when she and William are away working or on royal tours and frequently pick them up from school.

And the duchess always speaks fondly of her idyllic childhood in the Berkshire countryside with her siblings, Pippa and James.

While it could be another 20 years before the couple accede to the throne, William and Kate are now starting to map out where they see their family settling down.

They are keen to afford their offspring as normal childhoods as possible and feel that the duchess’s home county, which as well as being close to Kate’s family means they will be just a short drive from the Queen at Windsor Castle, is the perfect spot.

They intend to vacate their current country home in Norfolk, Anmer Hall, which will revert to the Queen.

One source said: ‘Word is that all three children will be leaving their London schools. William and Kate, in particular, love the idea of their family growing up not far from her own childhood home. They are both country people at heart and Kate spends so much time with her family anyway. It makes perfect sense for them to all be at the same school together. If all three children are at school in Berkshire together it also means George wouldn’t have to board.

‘The talk is that if they don’t find a suitable place with the Queen at Windsor, they are likely to end up if not necessarily right next to Bucklebury, not far off it. They have been discreetly viewing potential properties in recent months.’

Their decision may be influenced by finding somewhere with enough privacy. On the Windsor estate, where they have viewed several properties, they would already be within the royal security cordon.

A grand new private home would require the police establishing a whole new security set-up. But it can easily be done. Both the Prince of Wales and Duchess of Cornwall have private homes in the Cotswolds as well as using Clarence House as a London base.

Kensington Palace declined to comment, but it is likely the family will make a formal announcement in the coming months.