The heir to the throne said he was ‘proud’ that both his sons had recognised the threat facing the planet, and commended their commitment to green causes.

His specific praise for Harry will be seen as an attempt to heal a rift, after sources said the pair had barely spoken for months.

Charles, 73, made his comments in an essay about climate change for US magazine Newsweek. He wrote: ‘As a father, I am proud that my sons have recognised this threat. Most recently, my elder son, William, launched the prestigious Earthshot Prize to incentivise change and help repair our planet over the next ten years.’

On Harry, he added: ‘My younger son, Harry, has passionately highlighted the impact of climate change, especially in relation to Africa, and committed his charity to being net zero.’

His comments come amid reports that relations between him and his son are at an all-time low after Harry, 37, and his wife Meghan quit the royal family and moved to the US.

Charles was left ‘deeply shocked and hurt’ following the couple’s controversial Oprah interview – where they made a series of claims against the royals – and the father and son have ‘barely spoken’ in months following the Duke of Sussex’ repeated jibes at the Royal family.

The heir to the throne is also yet to meet his seven-month-old granddaughter Lilibet, it is believed. 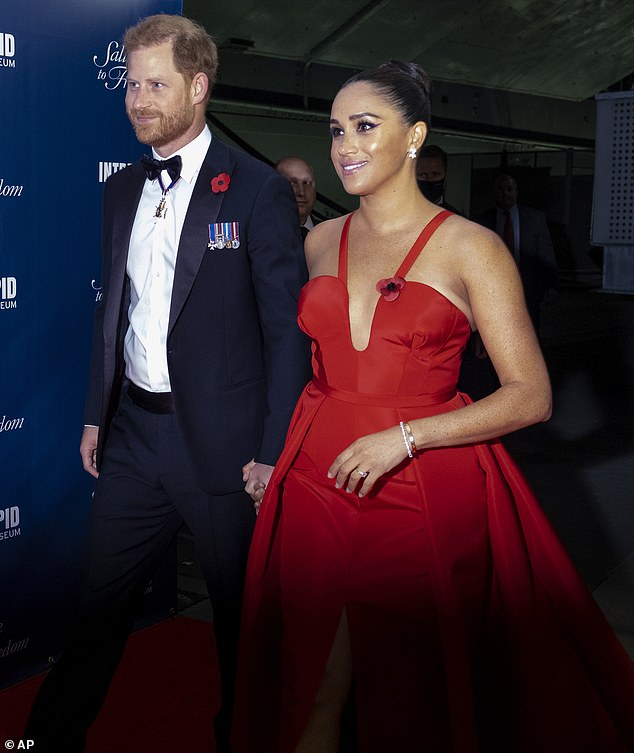 Harry also told a podcast in the US last year that he left Britain with wife Meghan to ‘break the cycle’ of ‘genetic pain and suffering’ for the sake of his own children.

Of his relationship with his father he said: ‘He treated me the way he was treated.’

Sources said Harry and Charles had barely spoken since the Duke of Edinburgh’s funeral last April, and did not meet when Harry was in London for the unveiling of a statue of Princess Diana during the summer.

The duke previously said his father had cut him off financially when he and Meghan announced plans to move to America and there was ‘a lot of hurt’.

Friends are also braced for potentially damaging revelations in Harry’s upcoming autobiography, due to be released later this year.

Last month Harry also claimed he had raised ‘concerns’ about Mahfouz Marei Mubarak bin Mahfouz, the Saudi tycoon at the centre of a probe into donations to his father’s charity.

Harry said he cut ties with Mr Mahfouz because he had concerns over the businessman’s ‘motives’.

He made the comments after it was revealed that he had held a private meeting with Mr Mahfouz, who has given tens of thousands of pounds to charities associated with the duke.

A friend of the Prince of Wales said: ‘Charles is deeply shocked and disappointed by Harry’s latest statement which effectively threw his father under the bus.

‘This attack was more damaging than the swipe at Charles’s parenting skills because this was a challenge to the way he conducts his business which is far more damaging to the future King.

‘Attempts have been made to clear the air but they have barely spoken since the Duke of Edinburgh’s funeral.’

The friend said Prince Charles loves his son and will not be retaliating. 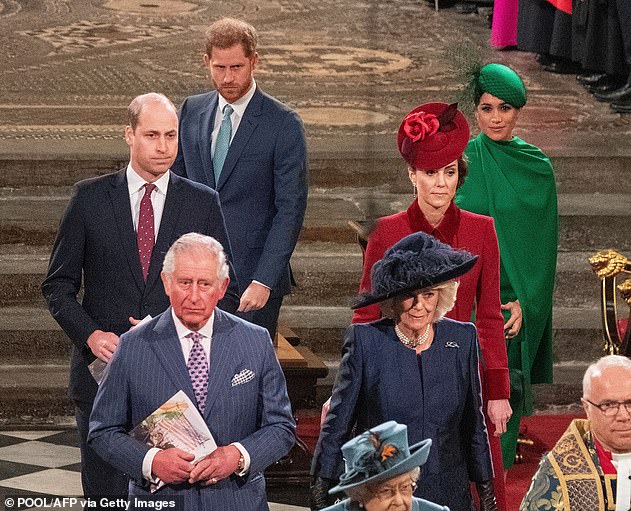 Prince Harry has made repeated jibes at his father, telling a podcast he moved to the US to ‘break the cycle’ of ‘pain’ from his childhood. Pictured, the Royals at the annual Commonwealth Service in March 2020 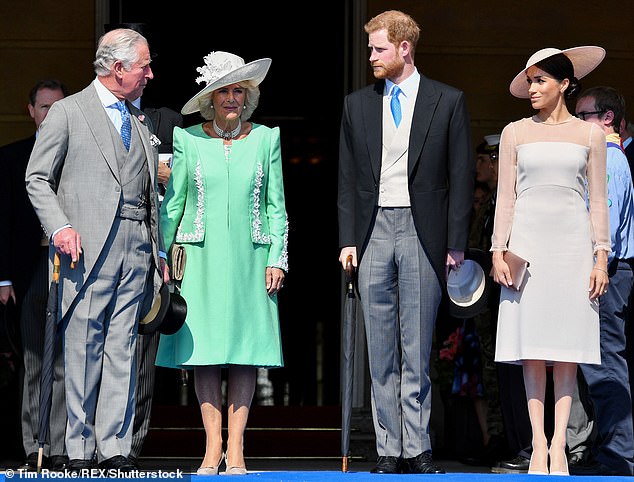 Prince Harry was in London in July to unveil the Diana statue but the father and son did not meet – and the future king has not yet met his six-month-old granddaughter Lilibet. Pictured, in May 2018

One source who worked for the Royal Family when William and Harry were children told the Daily Telegraph: ‘William and Diana had a particularly close connection.

‘Harry was very young for his age. Charles was largely absent and undemonstrative but unmistakably affectionate.’

The source added that the ‘dynamics changed quite a lot’ after Diana’s Panorama interview with Martin Bashir in 1995 in which she said: ‘There were three of us in this marriage.’

The newspaper reported that the Prince of Wales in fact had a more challenging relationship with William than Harry until recent years.

The Telegraph also claimed that Charles played peacemaker between the brothers amid tension between them around the time of Harry and Meghan’s wedding in 2018.

And Harry is then said to have become annoyed that Charles was increasingly turning to William for help in decision-making surrounding Megxit at the start of last year.

However, a source also told the Telegraph that Charles would be sad rather than angry at the breakdown in his relationship with Harry.

A former aide said: ‘The prince absolutely adores Harry. He will feel absolutely devastated by this – distraught. He’ll be beside himself if this means he also becomes more ostracised from his grandchildren.’ 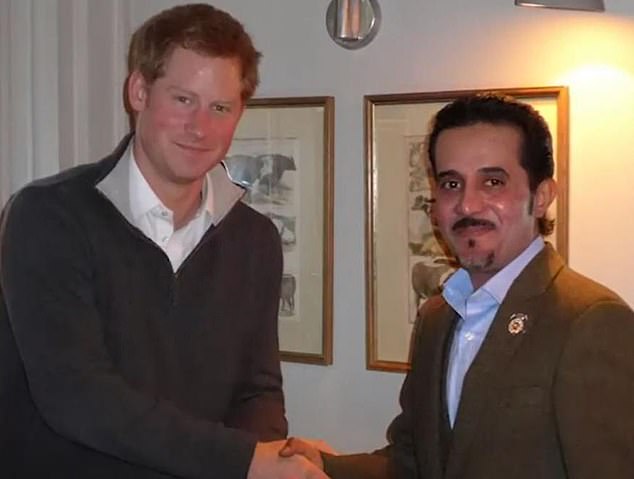 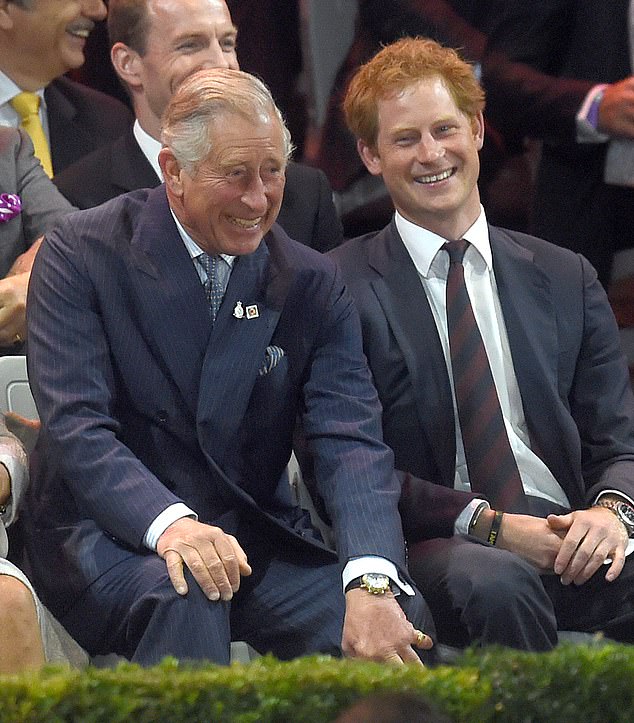 In an extraordinary statement which could spark a family rift, Harry said he had no involvement in what he described as the ‘CBE scandal’, insisted he had concerns about the Saudi businessman’s ‘motives’ 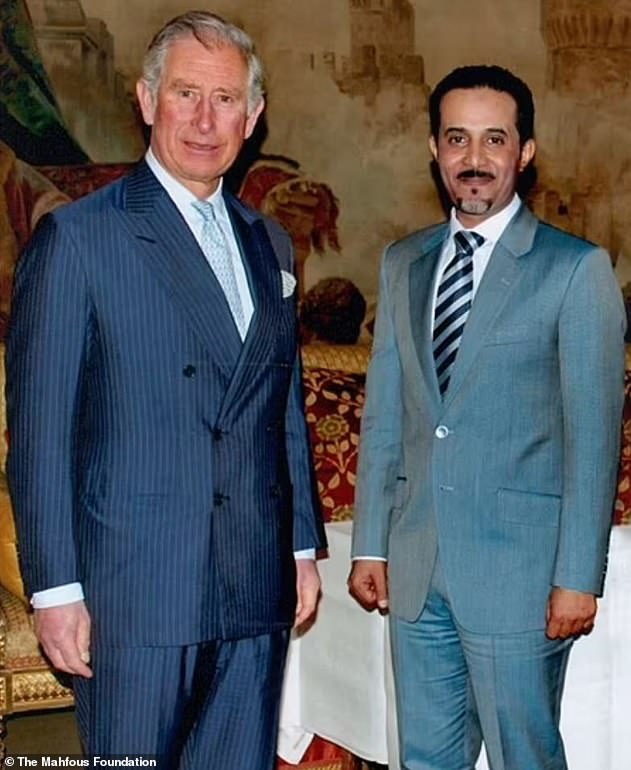 Mr Mahfouz is embroiled in claims that he showered money on charitable causes close to the Prince of Wales in the hope of obtaining an honour and British citizenship.

Harry is said to have become concerned about Mr Mahfouz in 2014 and wound down their relationship the following year, having met him twice.

But in an extraordinary statement which could spark a family rift, Harry said he had no involvement in what he described as the ‘CBE scandal’, insisted he had concerns about the Saudi businessman’s ‘motives’ and claimed he ‘expressed his concerns’ about him.

Charles has been engulfed by criticism in recent months owing to his relationship with Mr Mahfouz and the hundreds of thousands of pounds the billionaire donated to the royal’s pet projects via his charitable trust.

The prince’s senior aide Michael Fawcett was forced to resign as head of The Prince’s Foundation last month over his role in the scandal.

An independent investigation last week found Mr Fawcett had colluded with ‘fixers’ representing Mr Mahfouz who were trying to secure an honour in exchange for donations.

Mr Mahfouz is thought to have donated at least £1.5 million to royal charities.

The Duke of Sussex said that when he cut ties with Mr Mahfouz in 2015, he ‘expressed his concerns about the donor’. But his statement did not make clear to whom he voiced these qualms.

The following year, Charles presented the Saudi billionaire with an ‘honorary’ CBE in a private ceremony at Buckingham Palace. The Prince of Wales and Mr Mahfouz also held private meetings in Scotland and Saudi Arabia.

The Duke, 37, and Duchess of Sussex, 40, who live in a $14million mansion in Montecito, California, sensationally quit the royal family in January 2020.

Since then, they have made repeated statements against the royal family, while also signing deals worth millions with several companies.

In December, questions were raised about the couple’s £18million Spotify deal, after giving the streaming giant just 35 minutes of content so far. The pair also have a Netflix deal which industry insiders say could be worth as much as $100 million, while Prince Harry has a reported $1.7billion position at Silicon Valley start-up Better Up and a four-book deal said to be worth at least £18 million.