EXPRESS INFORMER > News & Politics > Prince Charles has advised the Government on how to save Britain’s forests, documents reveal

Prince Charles has advised the Government on how to save Britain’s forests, documents reveal

He has been teased for shaking hands with trees and talking to plants but the Government has been seeking advice from Prince Charles on how to save Britain’s forests.

Documents obtained by The Mail on Sunday reveal that Sir William Worsley, the Government’s so-called ‘Tree Champion’, sought the wisdom of the Prince of Wales at a private meeting at Clarence House.

A briefing note prepared for Sir William entitled ‘State of the Forestry Sector’ includes a list of ‘questions to ask HRH’ in his capacity as an environmental campaigner and landowner.

Spadework: Campaigner Prince Charles planting a Scots pine in June. His wisdom was sought at a private meeting at Clarence House

They included: ‘Has HRH seen a decline in forestry production?

‘What does he see [as the] problems with the decline in the sector? Does HRH think we need to influence our stakeholders more in becoming one voice for forestry?’

Sir William, who is overseeing Government plans for a major tree planting campaign, admitted to Charles that the increasingly devolved nature of the Forestry Commission over decades meant it had lost its ‘power’ as ‘sector leader’. 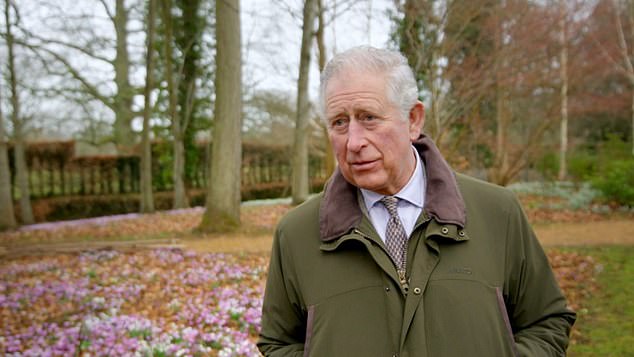 The papers do not detail Charles’s comments but he is currently expanding the woodland on his 130,000- acre Duchy of Cornwall estate

The agenda for the meeting on June 12 – included in a tranche of documents released under Freedom of Information rules – show the two men also discussed how the creation of new woodland, including so-called urban forests in towns and cities, could mitigate the effects of global warming.

The papers do not detail Charles’s comments but he is currently expanding the woodland on his 130,000- acre Duchy of Cornwall estate and recently told an ITV documentary: ‘I love planting trees and trying to improve and enhance the environment to restore lost habitats.’

In a TV interview in 1986, the Prince famously said it was ‘very important’ to talk to plants and that they ‘respond’ when spoken to.

His views were ridiculed by many commentators.

Last year, a list of 70 facts about Charles – released to coincide with his 70th birthday – included one about his involvement in many tree planting ceremonies. ‘After planting each tree, HRH gives a branch a friendly shake to wish them well,’ it stated.

The request by officials to hear the Prince’s views contrasts with his previous involvement in Government affairs, including his so-called ‘black spider’ memos to Ministers that critics said was an inappropriate bid to influence policy.