Mystery of the missing £500,000: Prince Charles’ foundation insists it returned Russian banker’s cash… but he says he doesn’t have it

A former Russian banker who donated £500,000 to The Prince’s Foundation and expected to secure a trip to Dumfries House – only to have the invitation withdrawn – has sensationally claimed that he hasn’t got the money back yet.

The Mail on Sunday last week revealed that Dmitry Leus had cited the donation in his successful application to the Home Office for British residency.

The financier had agreed the donation with Michael Wynne-Parker, a society fixer who had asked for the funds to be sent to The Prince’s Foundation via a bank account held by Burke’s Peerage, the gentry guide. Burke’s Peerage denies handling any of the money.

The foundation said last week it no longer had the cash and it had been returned ‘to source’ after questions were raised by its ethics committee about Mr Leus’s suitability as a donor. The charity did not say, however, to whom the money had been returned.

Former Russian banker Dmitry Leus (above) donated £500,000 to the Prince’s Foundation and expected to secure a trip to Dumfries House, but claims his offer was revoked and he never saw his money returned

Lawyers for Mr Leus said: ‘Our client made a donation to The Prince’s Foundation in good faith via Burke’s Peerage. Burke’s Peerage have not returned any of the money to him.’

A source close to Mr Leus said there were concerns the full £500,000 may not have ever reached The Prince’s Foundation as intended.

A spokesman for the foundation said: ‘The Mahfouz Foundation is holding £300,000 on behalf of Mr Leus and await instructions on that being returned. Mr Wynne-Parker is the trustee of Mr Leus and has the remaining £200,000.’

Informed of the development, Mr Leus’s lawyers said: ‘Our client never heard of the Mahfouz Foundation until today. He was certainly never consulted about his donation being held there and never consented to this.

‘It was done entirely without his knowledge. He is deeply shocked at what appears to have happened to a charitable donation given in good faith.’ 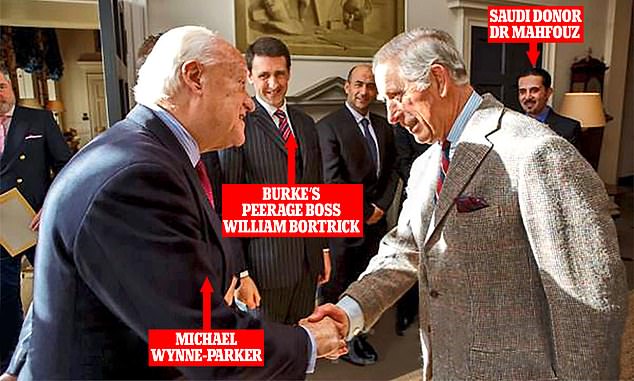 The mystery is yet another insight into the strange and sometimes murky world of the vast charity donations made by wealthy foreigners to the Royal charity.

In an email revealed by this newspaper last week, society fixer Mr Wynne-Parker outlined a scheme by which donors could meet the Prince of Wales for dinner and stay overnight at Dumfries House.

Mr Wynne-Parker said that after middle-men – himself included – had taken a 25 per cent cut of the suggested £100,000, the rest would be funnelled through a bank account held by Burke’s Peerage.

Born in Turkmenistan, Mr Leus has Russian and Israeli citizenship, but entered Britain on a European Union passport from Cyprus.

He lives in the Knightsbridge area of London with his wife and their four sons. He was a European fencing champion aged 17 and said in a recent interview: ‘My business mindset was created in the gymnasiums and competition halls of my teenage years.’