Social media users have urged others to ‘remember their humanity’ after Prince Charles was criticised over his 200-mile round-trip drive to visit the Duke of Edinburgh in a London hospital.

The Prince of Wales arrived at the back of King Edward VII’s hospital in Marylebone at around 3.30pm on Saturday to visit his father, 99, who was admitted last week as a ‘precautionary measure’.

The hashtags #princephilip and #princephillip have been trending on Twitter this morning, with many criticising the heir-to-the-throne’s visit during the ongoing lockdown in England.

One Twitter user said: ‘I do hope Prince Phillip gets better but why was Prince Charles allowed to visit his father in hospital when families all around the country are not getting to visit their loved ones who are in hospital when it’s not COVID related?’. 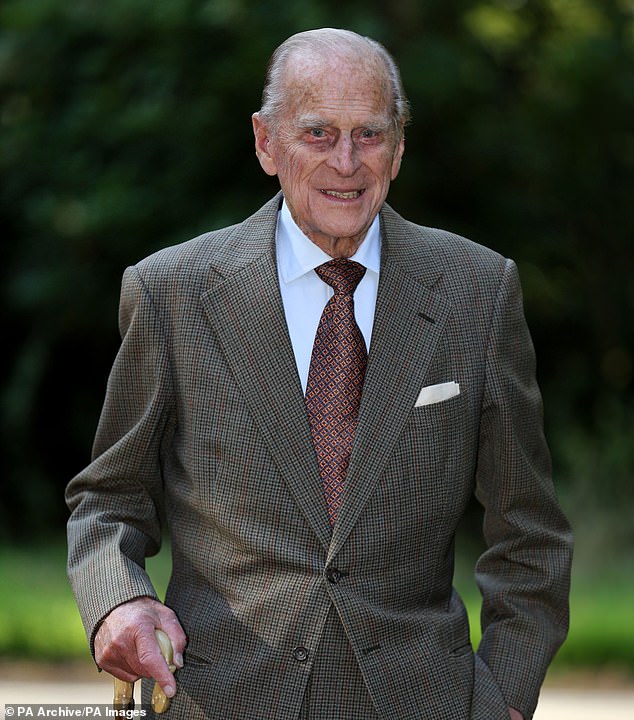 Philip, pictured above in 2013, is expected to remain in hospital until next week. He was admitted on Tuesday after feeling unwell 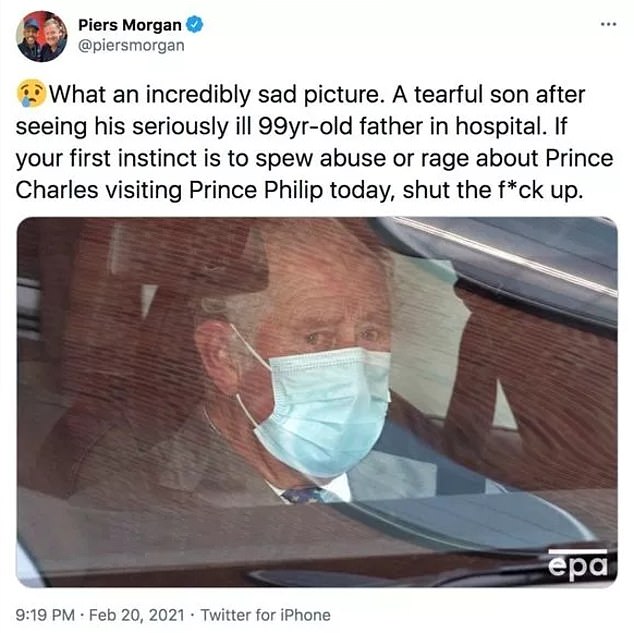 Many leapt to the defence of the Prince of Wales, with several insisting they do not ‘begrudge’ the royal’s journey, saying he was simply ‘going to see his sick dad in hospital’.

Good Morning Britain host Piers Morgan was vocal in his defence of the Prince, saying: ‘What an incredibly sad picture. A tearful son after seeing his seriously ill 99yr-old father in hospital. If your first instinct is to spew abuse or rage about Prince Charles visiting Prince Philip today, shut the f*ck up.’

Charles is the first member of the royal family to visit Philip; it’s thought the heir-to-the-throne spent, 72, spent around 30 minutes with his father after making the 100-mile journey from Highgrove in Gloucestershire to the capital.

The Prince appeared visibly emotional as he was driven away from the London hospital, which is currently only considering visitors in ‘exceptional circumstances’ due to the Covid pandemic.

The social media reaction began shortly after photos of the Prince emerged driving away from the London hospital.

One Twitter user raged: Not disrespect to #princephillip.  But double standards. Is prince Charles getting a fine?’

Another asked: Why is it #PrinceCharles can visit his father #princephillip in hospital? Relatives who have lost family through #Covid-19 have been unable to say goodbye to there loved ones. once again double standards in our country.’

Several other social media users have jumped to the defence of the Prince of Wales, with several insisting they do not ‘begrudge’ the royal, who was simply ‘going to see his sick dad in hospital’

However, there was plenty defending the journey. One user penned: ‘There is a backlash about Prince Charles going to see is sick dad in hospital where has humanity gone in this country ffs’.

Another wrote: ‘Prince Philip has a family like all of us. Who love him and doesn’t want to think of a life without him. Only #PrinceCharles has visited, like many around the country. This pandemic has turned people into ar******s.’

A third commented: ‘I didn’t get the chance to rush to the hospital that my boyfriend was flown too and I didn’t get to go to the funeral to say goodbye either. Does this mean I begrudge Prince Charles visiting his father. NO. What happened to showing a bit of kindness guys eh?’ 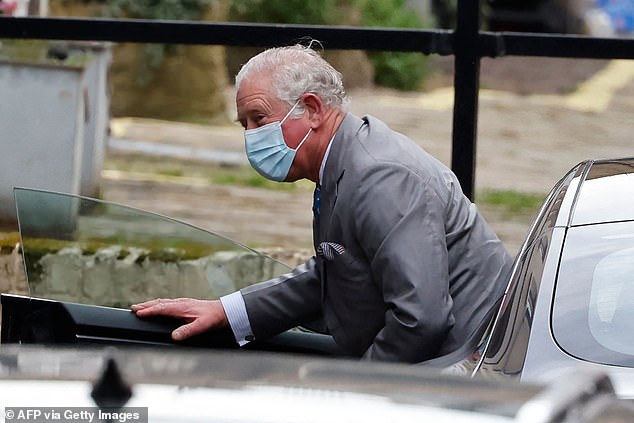 Charles arrived at the back of the London hospital where Philip, the 99-year-old husband of his mother Queen Elizabeth, has been since Tuesday. He returned to Highgrove after the short visit

Emotional: Prince Charles, pictured following his visit to the Duke, made a 200-mile round trip to spend half an hour at Philip’s side

King Edward VII Hospital in London: Royals’ favourite where Philip, the Queen, Charles, Kate and the Queen Mother have all been treated – and where Princess Margaret sadly died 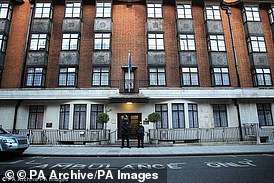 Prince Philip has been admitted to the the King Edward VII Hospital in Central London (pictured here, when Queen Elizabeth II recovered after she was admitted with symptoms of gastroenteritis in 2013)

Prince Philip will be in familiar surroundings at the private hospital in Westminster after being previously admitted there in December 2019 and April 2018.

The hospital, which only has 56 beds across its wards, was set up in 1899 to treat former servicemen and the general public as soldiers returned from the Second Boer War.

King Edward VII became the hospital’s first patron in 1901 and it continues to be recognised by the royal family today.

In recent years, it has been used by Queen Elizabeth, Princess Margaret, the Queen Mother, Prince Philip, Prince Charles and the Duchess of Cambridge.

In 1995, the Queen Mother had her right hip replaced during an operation at the hospital.

The 90-minute operation was carried out at the famous hospital and she had had treatment there before.

Meanwhile, in 2002, Princess Margaret suffered a stroke and died at the hospital at the age of 71.

The Palace reiterated to MailOnline today the statement made about the Duke’s health last week, saying the 99-year-old is likely to stay in hospital into next week, adding that all decisions have been taken with ‘an abundance of caution’.

Charles arrived at the hospital at around 3.20pm on Saturday in a grey Tesla car, and exited the vehicle wearing a face mask, before leaving around 30 minutes later.

Clarence House confirmed last night that the Prince of Wales did not stay in the capital and instead made the two-hour, 100-mile journey back to his Gloucestershire home, rather than choosing to remain close to the hospital or be with his mother Queen Elizabeth in Windsor.

It is thought Charles had not seen his father since before Christmas because of the nationwide coronavirus restrictions, with the Duke staying at Windsor Castle with the Queen.

Today is Philip’s sixth day in the private London facility and comes as the fallout from the news about Harry and Meghan’s departure from working royal life continues.

He is understood to have been aware the announcement on Harry and Meghan was due to be released yesterday.

Royal author Penny Junor said of Philip: ‘We do all know he doesn’t like fuss, and he would regard a visit as fuss.’

She said she did not know the reason for the visit, but added: ‘Momentous things are happening in the family at the moment and I suppose it’s perfectly possible that Charles wanted to go and talk to his father and reassure him about Harry.’

His visit to the hospital to see his father comes a day after he appeared alongside his wife the Duchess of Cornwall in a video message to urge ethnic minorities ignore fake news and get their Covid jabs.

Charles who along with the Duchess of Cornwall, 73, has had his first coronavirus jab, told of his concern about the ‘variable uptake’ among black and Asian Britons.

The Prince, who spent much of the first lockdown at Birkhall in Scotland with the Duchess of Cornwall, spoke last year of not being able to see his father as coronavirus restrictions persisted.