The Prince of Wales appeared in high spirits today as he hosted a major investiture ceremony at St James’s Palace.

Prince Charles, 72, presented honours to recipients including to Eastenders actor Rudolph Walker, who has played Patrick Trueman in the soap for 20 years, and the dean of Westminster Abbey, The Very Reverend Dr. David Hoyle.

Significant changes brought in to keep the event Covid secure included the insignia being collected by the recipients from a cushion rather than being pinned on by the prince.

Those being honoured with knighthoods and MBEs also had to wear masks as they move around the Palace, but could remove their face coverings in the Throne Room where the actual ceremony is taking place.

The Prince of Wales appeared in high spirits today as he hosted a major investiture ceremony at St James’s Palace. Among those to receive a CBE from the Prince of Wales today was Eastenders actor Rudolph Walker, who plays Patrick Trueman in the soap 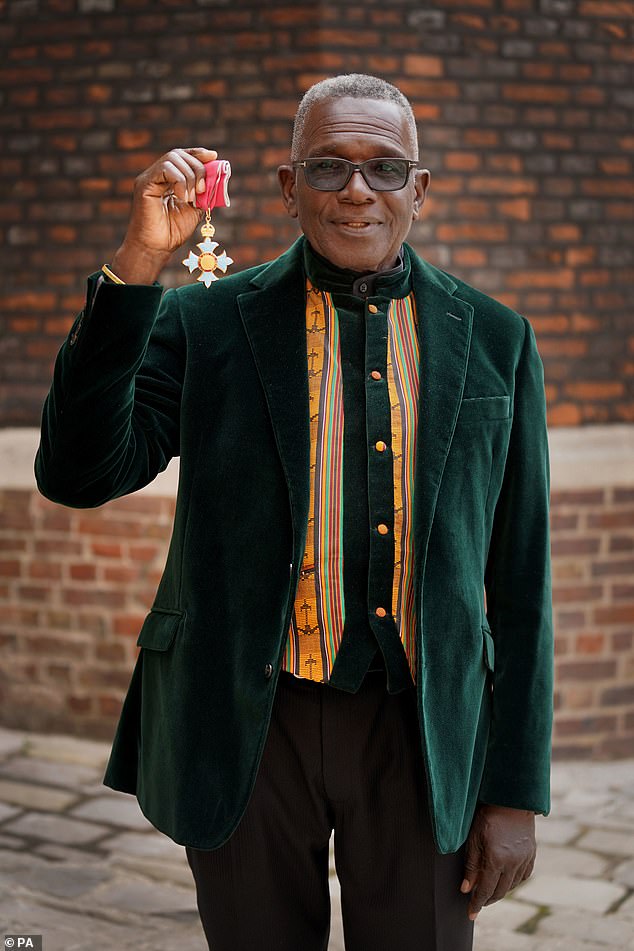 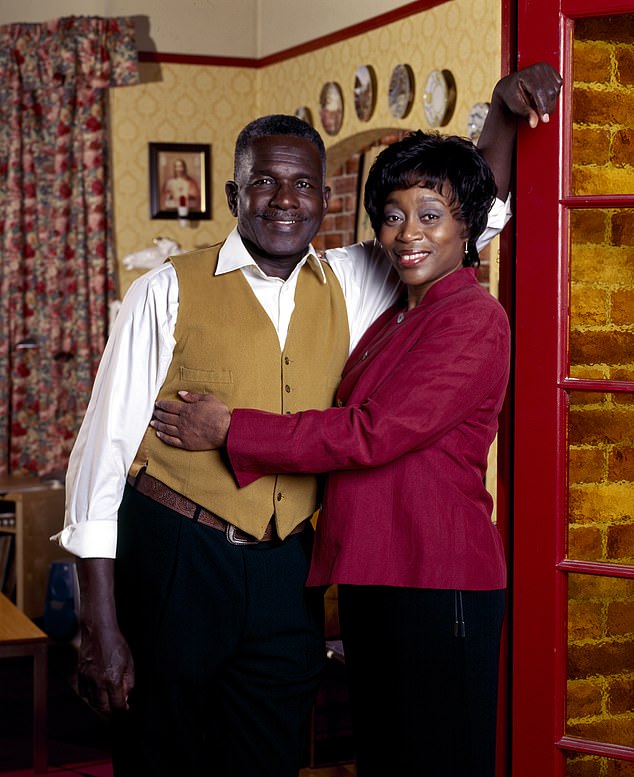 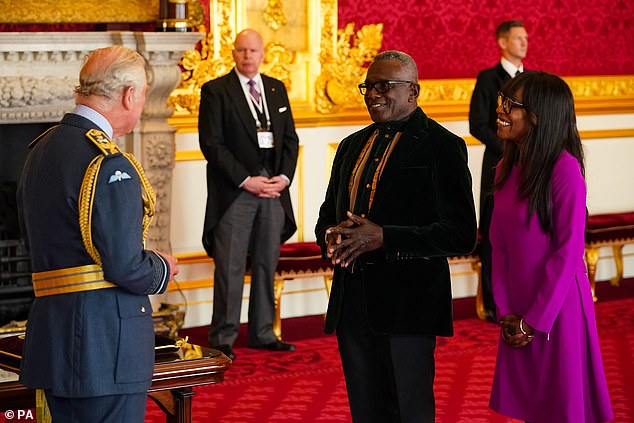 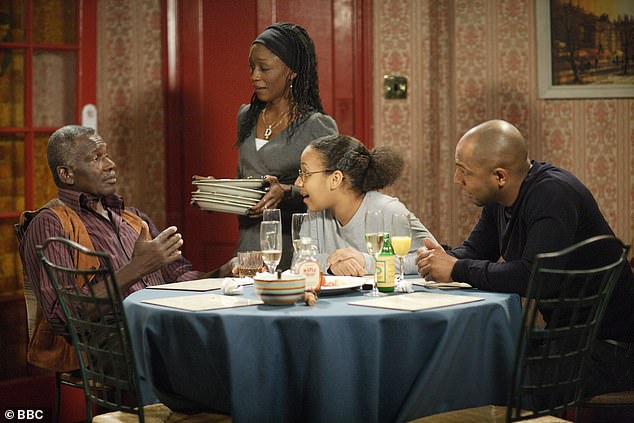 Eastenders fans will recognise Rudolph as the longstanding character Patrick in the soap (pictured, in 2009 with Diane Parish, Belinda Owusu and Don Gilet)

Eastenders star Rudolph was appointed Commander of the Order of the British Empire (CBE) in the 2020 New Year Honours for services to drama and charity.

Rudolph became the first black person to star in a major TV series, when he was cast as the lead role in Love Thy Neighbour in 1972.

He has also worked in repertory theatres across the country.

Buckingham Palace – the Queen’s official London residence – is normally the venue for many of the ceremonies – but the event took place at St James’s Palace because of on-going work to update the services at the royal residence.

Recipients were only permitted to bring one guest, but the family member, partner or friend also had the chance to meet heir-to-the-throne Charles.

During traditional investitures, each recipient would have approached the prince or hosting royal on their own, and up to three guests would have watched, seated at a distance with scores of other spectators.

But during the pandemic, those being honoured entered the Throne Room one at time, joined by their guest who was also greeted by the prince.

There was no audience present but the investiture is thought to have been shown on large screens to those waiting their turn in the adjacent Queen Anne room – another of the State Rooms. 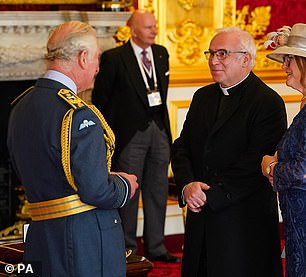 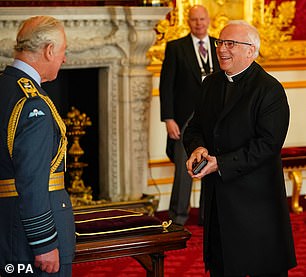 Meanwhile the dean of Westminster Abbey, The Very Reverend Dr. David Hoyle, appeared to share a laugh with Prince Charles during the ceremony 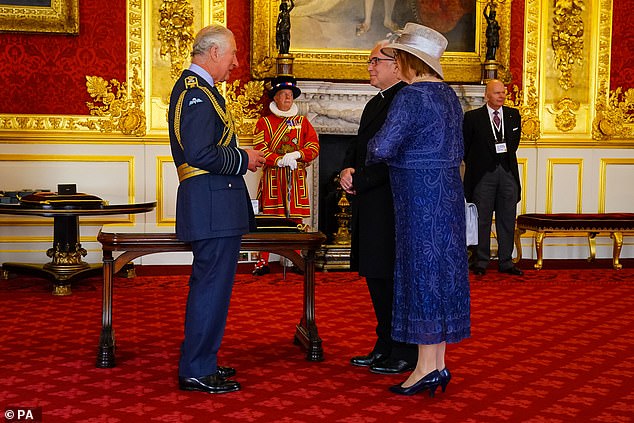 Recipients were only permitted to bring one guest, but the family member, partner or friend also had the chance to meet heir-to-the-throne Charles

Those attending are required to bring proof of a negative lateral flow Covid test to ensure entry and be subject to a temperature check on arrival.

There will also be no hanging around and mingling afterwards. Those attending will depart after collecting their honour, and seating will be socially distanced.

There will also be reduced numbers of ceremonial and support staff present, and family portrait and media facilities remain, but in more limited numbers. 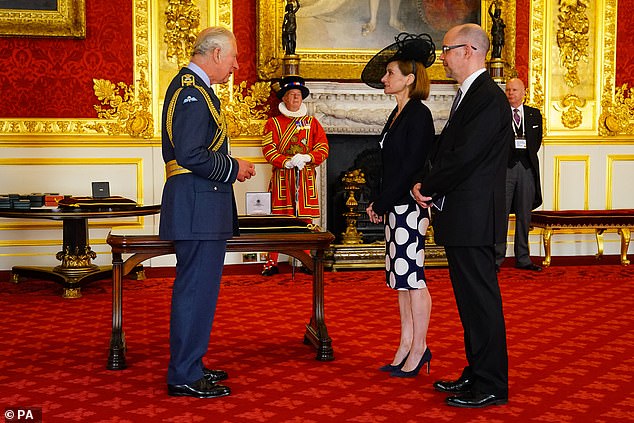 Adeline Ginn, from London, was awarded an MBE, who is the founder and Chair of Women in Rail 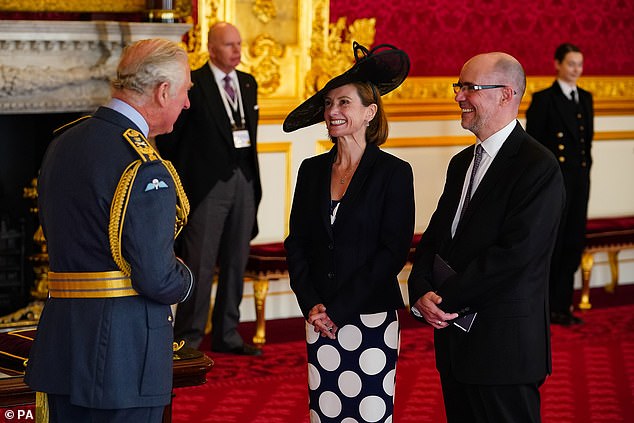 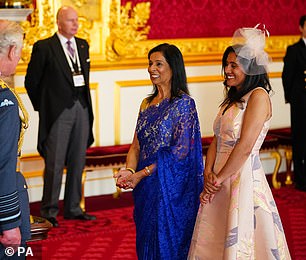 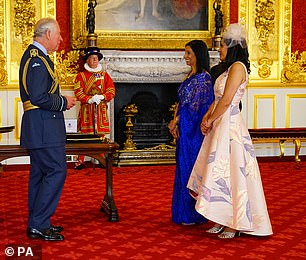 Investitures are usually a key part of the royal calendar, but there were no major ones for 15 months, since before the start of England’s first national lockdown.

Today was just the second ceremony to take place since the start of the Covid-19 pandemic, with the first taking place yesterday.

The events took took place despite the delay to the June 21 easing of restrictions following concerns over the rapidly spreading Delta variant first identified in India. 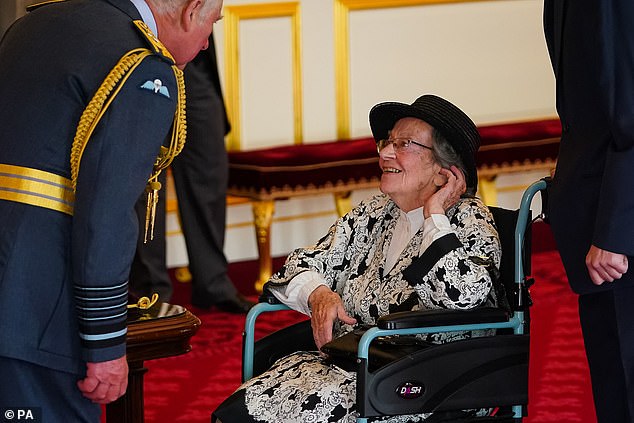 Charles could be seen leaning down as he spoke with Maria Green, who was made an MBE during the ceremony today 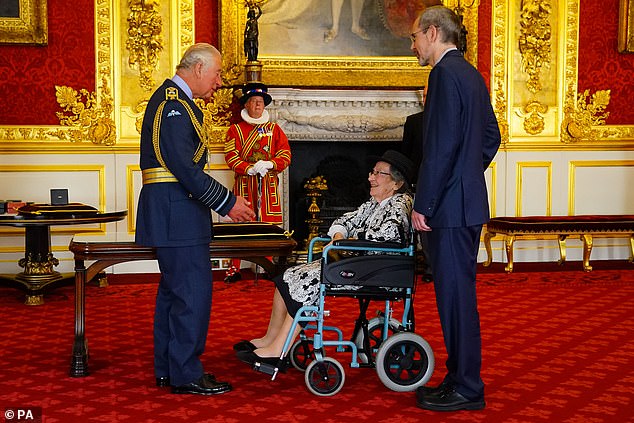 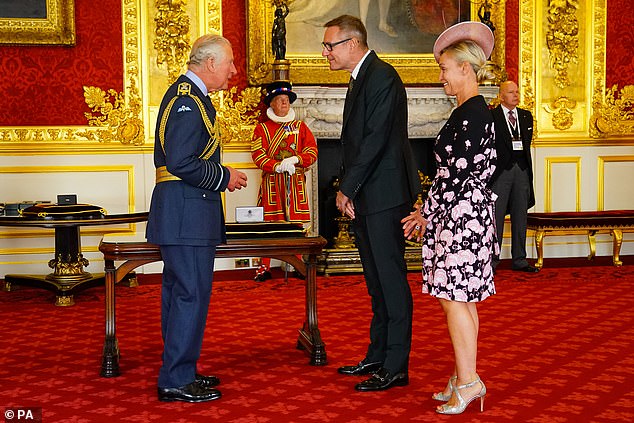 ‘The arrangements have been made in full consultation with Public Health England and Government to ensure they are Covid compliant, in line with current guidelines,’ a Buckingham Palace spokeswoman said.

In March 2020, the Queen was pictured wearing gloves for the first time at a palace investiture, when the total number of people diagnosed with Covid-19 in the UK was 51.

It was before the UK was in the grip of coronavirus, and the head of the World Health Organisation was advising people over the age of 60 to avoid crowded areas. 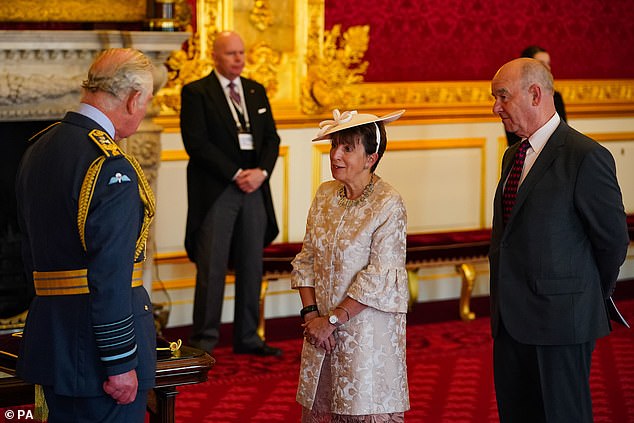 Meanwhile Marilyn Scott, director of The Lightbox museum and gallery in Woking beamed as she spoke with Prince Charles 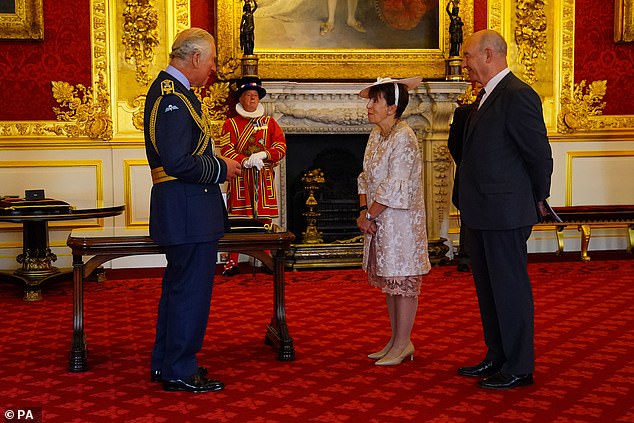