Prince Charles is working at his desk ‘as usual’ today despite having coronavirus as his aides try to trace anyone who met him over the past fortnight to warn them they may have been exposed, it has been revealed.

The Prince of Wales, 71, has a ‘mild’ form of the illness and is on the Balmoral estate with his wife Camilla, the Duchess of Cornwall, who has tested negative and is without any symptoms of the virus, which has killed 465 and infected 9,500 more in the UK so far.

Charles’ doctor believes that the royal may have been contagious from March 13 at the earliest – just 24 hours after he last saw his 93-year-old mother the Queen, who is in self-isolation at Windsor Castle with Prince Philip, 98.

His team have been informing anyone who met or came close to him while he was contagious – and those people are expected to go into self-isolation if they haven’t already, according to the Telegraph.

It came as NHS Scotland’s Chief Medical Officer Dr Catherine Calderwood defended the decision to test the royal couple, saying there were ‘very good reasons’ but she couldn’t disclose them because of patient confidentiality.

But Clarence House refused to comment on the Prince of Wales’ health after Dr Calderwood appeared to hint Charles and Camilla might have underlying medical conditions that made a coronavirus test necessary. 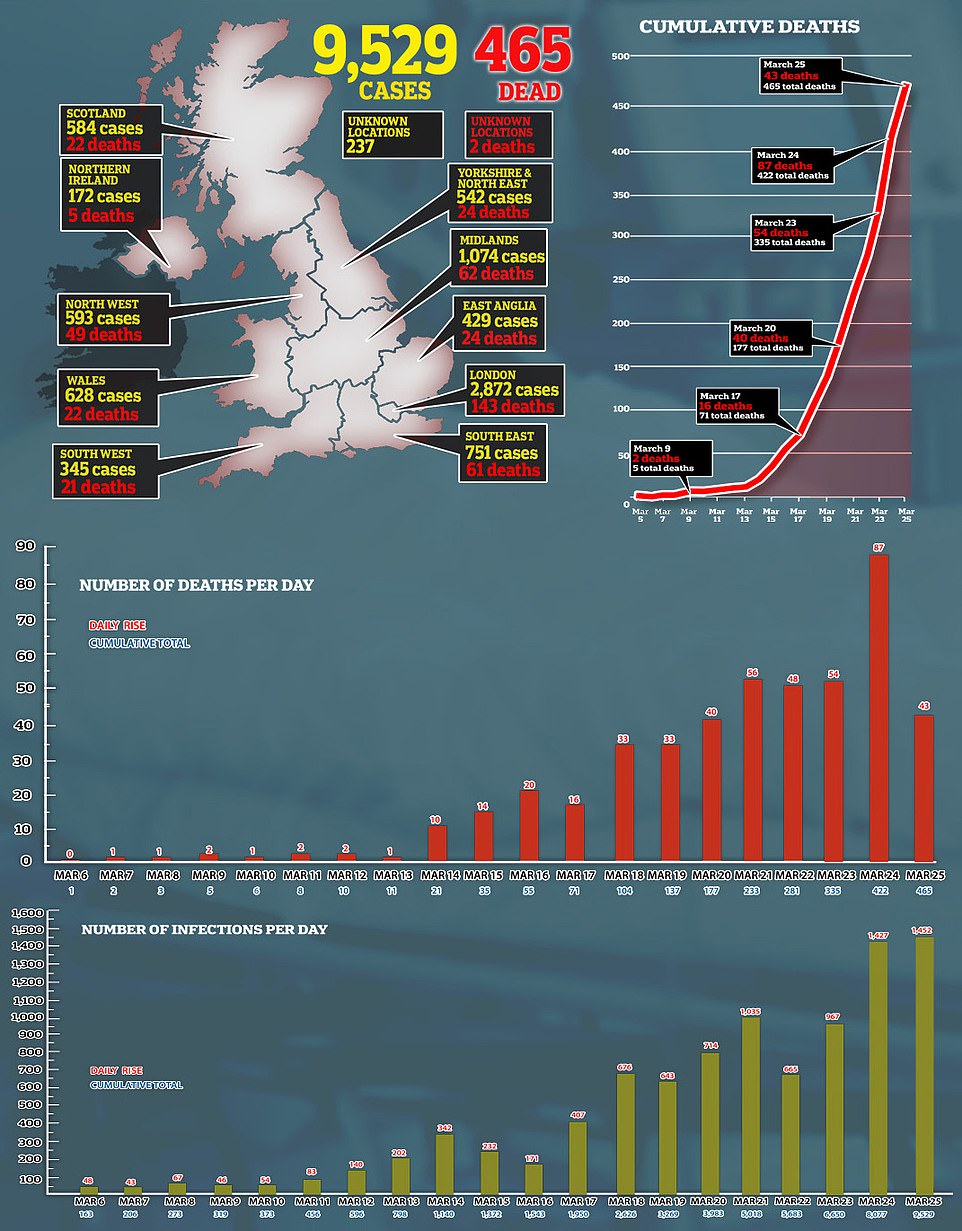 Prince Albert, Boris Johnson and the Queen: Who Prince Charles has met over the past 16 days and where

Prince Charles has carried out a number of engagements over the past fortnight at which he has had contact with possibly hundreds of people.

Here are his movements around London over the last two weeks:

Charles and Camilla are said to be ‘upbeat’ despite being watched carefully by the Royal household medical team at their Aberdeenshire home, Birkhall, where they will remain in self-isolation for at least another two weeks.

‘Both of them remain in good spirits. There is a sense of keeping calm and carrying on’, a royal source told People magazine, adding: ‘The duchess is concerned for him, but she is aware of his own good spirits and therefore is keeping a close eye on him and mindful of her own situation’.

Charles was still working on his pet projects yesterday, speaking on the phone to Professor Klaus Schwab, the founder and executive chairman of the World Economic Forum who organises the annual gathering of world leaders and billionaire bosses at Davos each year.

The prince, who is patron of the humanitarian charity International Rescue Committee, also spoke to former Labour MP David Miliband last night. Mr Miliband is CEO of the IRC.

Charles is conducting meetings with a combination of video conferencing and calls to carry out royal duties.

Clarence House has declined to give an update on the Prince of Wales’ health status after announcing on Wednesday he had tested positive for coronavirus.

But a spokesman said the heir to the throne, who is at his Scottish home Birkhall, was working at his desk as usual. He added Charles had received hundreds of ‘get well soon’ wishes sent to Clarence House – a mixture of cards but mostly digital messages.

The Queen and Prince Philip face a nervous wait at Windsor Castle after their son revealed he has tested positive for coronavirus.

The Queen and Philip had already travelled to Windsor Castle before the announcement from Clarence House today, after moving to the royal estate last Thursday.

A royal source said Charles’ doctor’s most conservative estimate was that the prince was contagious on March 13 – 24 hours after ‘briefly’ meeting his 93-year-old mother the Queen.

A Buckingham Palace spokesman said: ‘Her Majesty remains in good health. The Queen is following all the appropriate advice with regard to her welfare’.

Scotland’s Chief Medical Officer has defended the decision to test the Princes of Wales for coronavirus, saying there were ‘very good reasons’ behind the move.

Dr Catherine Calderwood spoke after news that the heir to the throne had been tested for Covid-19 sparked an angry backlash from some.

While some medical workers who are self-isolating have been unable to get tested to see if they could come back to work, both Charles, 71, and his wife Camilla, 72, were tested on Monday.

The Royal couple are currently staying at the Birkhall estate in Aberdeenshire, with Camilla separating herself from her husband after she tested negative.

Speaking about Charles on BBC Radio Scotland’s Good Morning Scotland programme, Dr Calderwood said: ‘I have spoken to the team in Grampian who were looking after the individual.

‘My understanding is there were very good reasons for that person and his wife to be tested, and obviously I wouldn’t be able to disclose anything else that I know because of patient confidentiality.’

It is not known if the monarch has been tested for coronavirus but she is said to be on lockdown and not even close family members can see her.

Her weekly meeting with the Prime Minister is being done by phone, rather than in person at Buckingham Palace, where a worker tested positive while the Queen was still in residence last week.

The monarch and the Duke of Edinburgh, who was helicoptered to Windsor from Sandringham last Thursday, are being looked after by her two favourite staff, who are part of a skeleton team of just eight. The rest of her 100-plus workers have all been told to go home to protect both the head of state and themselves.

Charles’ coronavirus was confirmed on Tuesday – exactly a fortnight after meeting Prince Albert of Monaco, who tested positive five days ago, after he sat opposite the Prince of Wales at a WaterAid event in London on March 10.

A Clarence House spokesman said: ‘The Prince of Wales has tested positive for Coronavirus. He has been displaying mild symptoms but otherwise remains in good health and has been working from home throughout the last few days as usual.

‘The Duchess of Cornwall has also been tested but does not have the virus. In accordance with Government and medical advice, the Prince and the Duchess are now self-isolating at home in Scotland The tests were carried out by the NHS in Aberdeenshire where they met the criteria required for testing’. NHS Scotland has said the heir to the throne qualified because of his age and his symptoms.

Charles’ spokesman said it was impossible to say where he caught it from because of the large number of public engagements he has carried out in ‘recent weeks’ – but it will raise questions over whether it came from Prince Albert and if the heir to the throne has spread it himself, including to relatives. 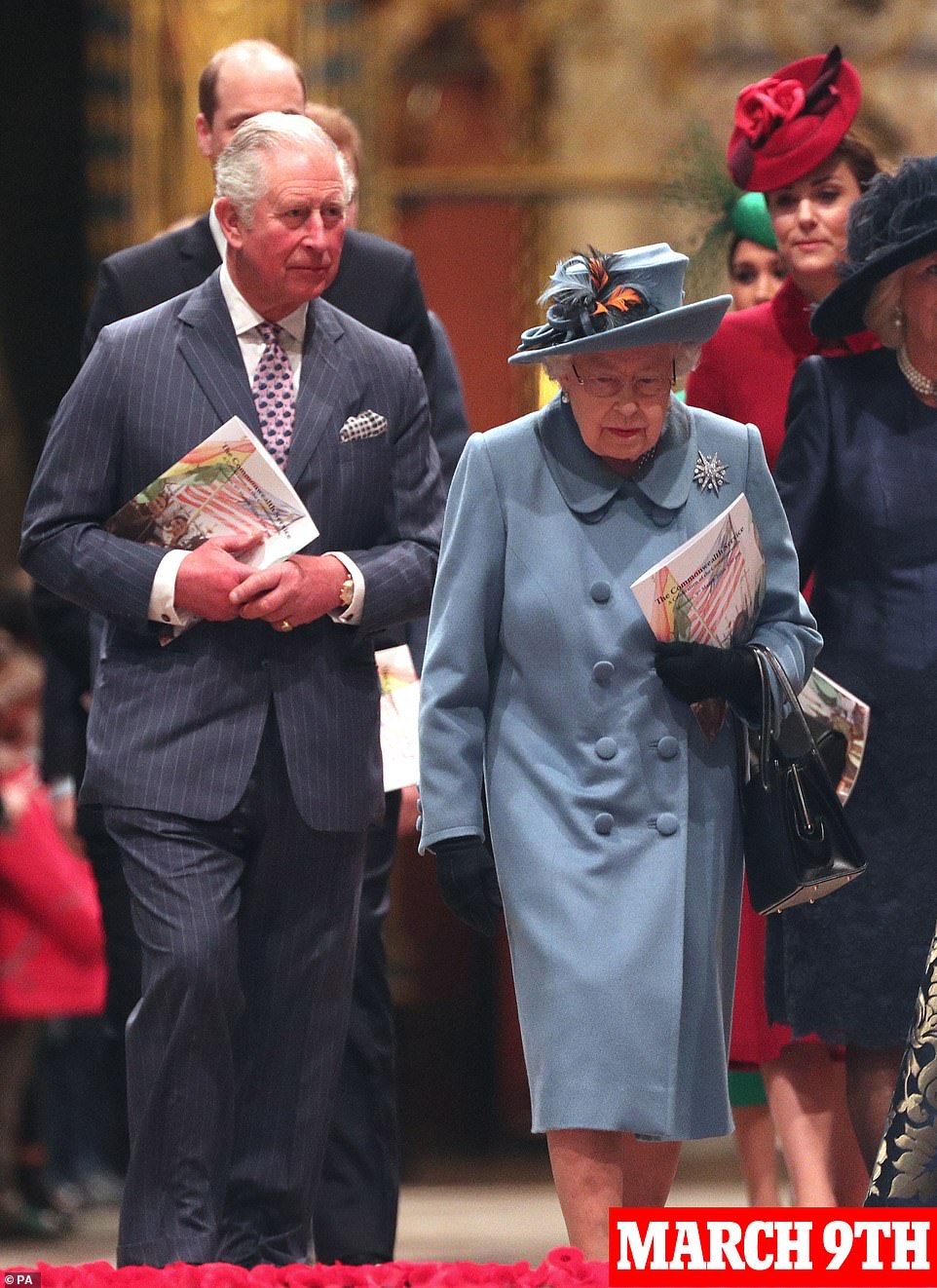 Charles was last seen with the Queen on March 9 at the Commonwealth Service at Westminster Abbey and saw her again on March 12 – 24 hours before his doctor claims he became contagious. Her Majesty is well but taking appropriate medical advice and is with Philip at Windsor with a skeleton team of just eight 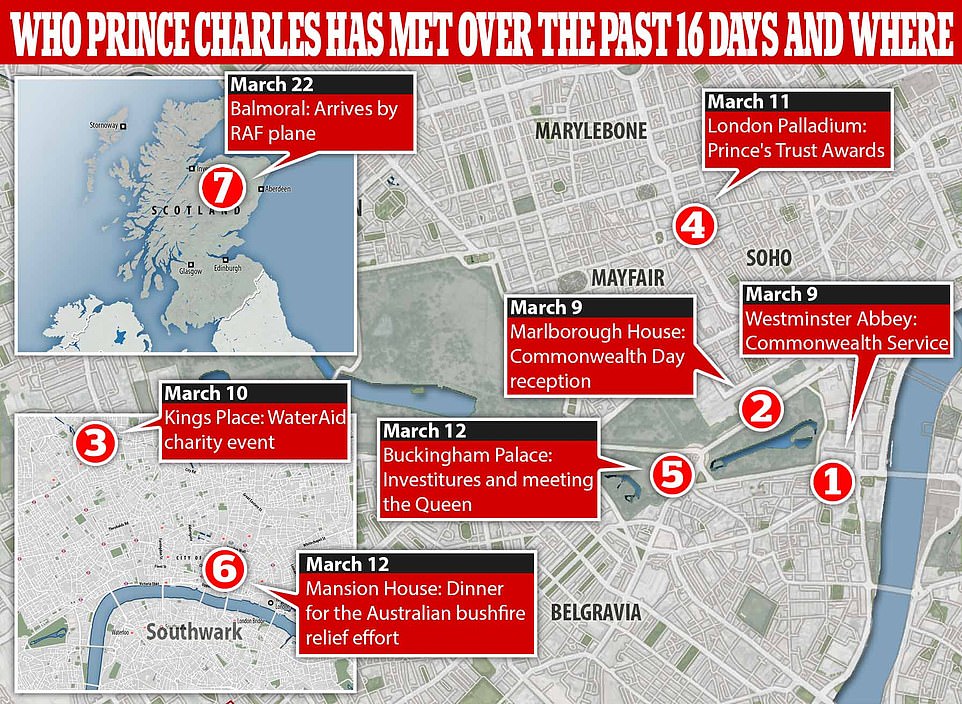 MailOnline has plotted Charles movements over the past 16 days, where he is likely to have met hundreds of people over the past few weeks where hge 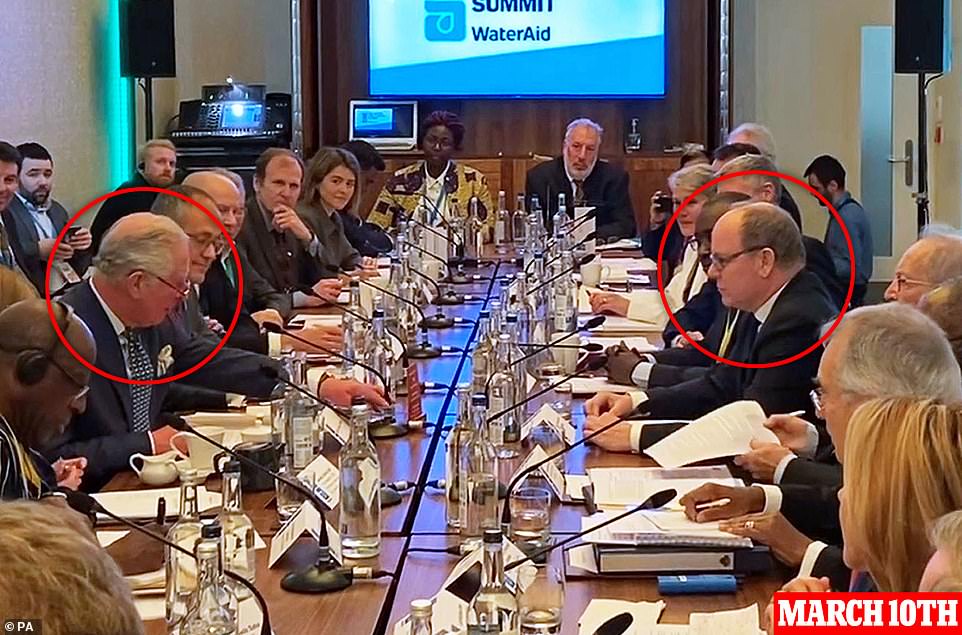 March 10: Charles (left) sat across from Prince Albert of Monaco at an event in London on March 10 – Albert tested positive on March 20 but Charles’ team say it is impossible to know how he caught it after a flurry of public engagements this month 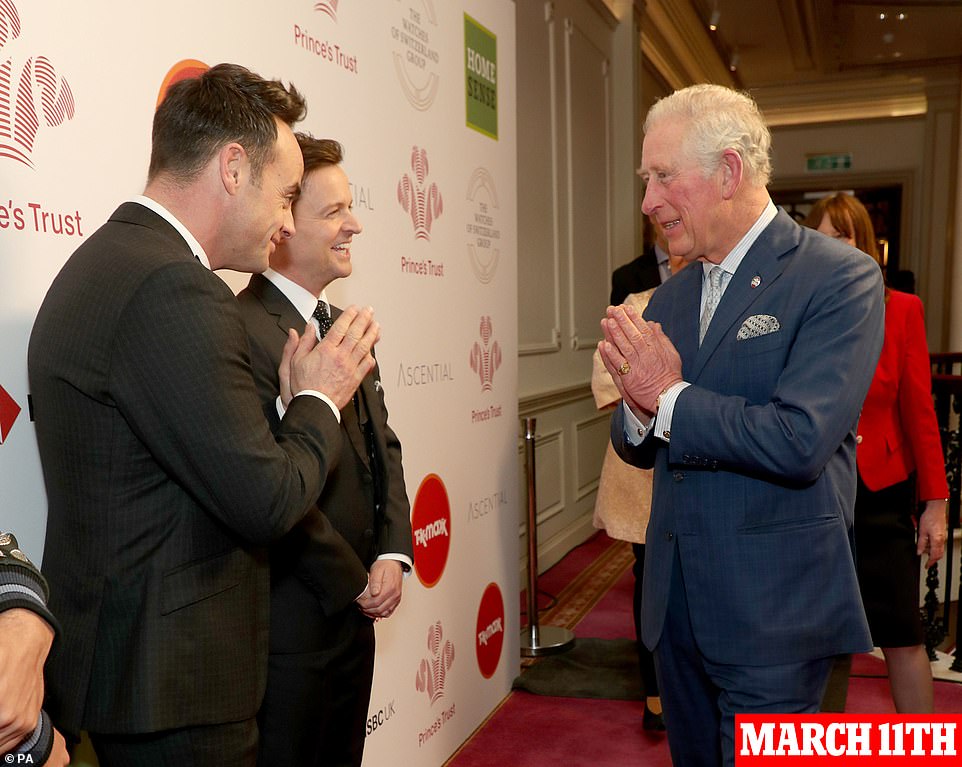 March 11: Prince Charles has been continuing to carry out public engagements despite the coronavirus crisis – but has avoided shaking hands, shown here using a namaste gesture to Ant and Dec at the Prince’s Trust Awards 2020 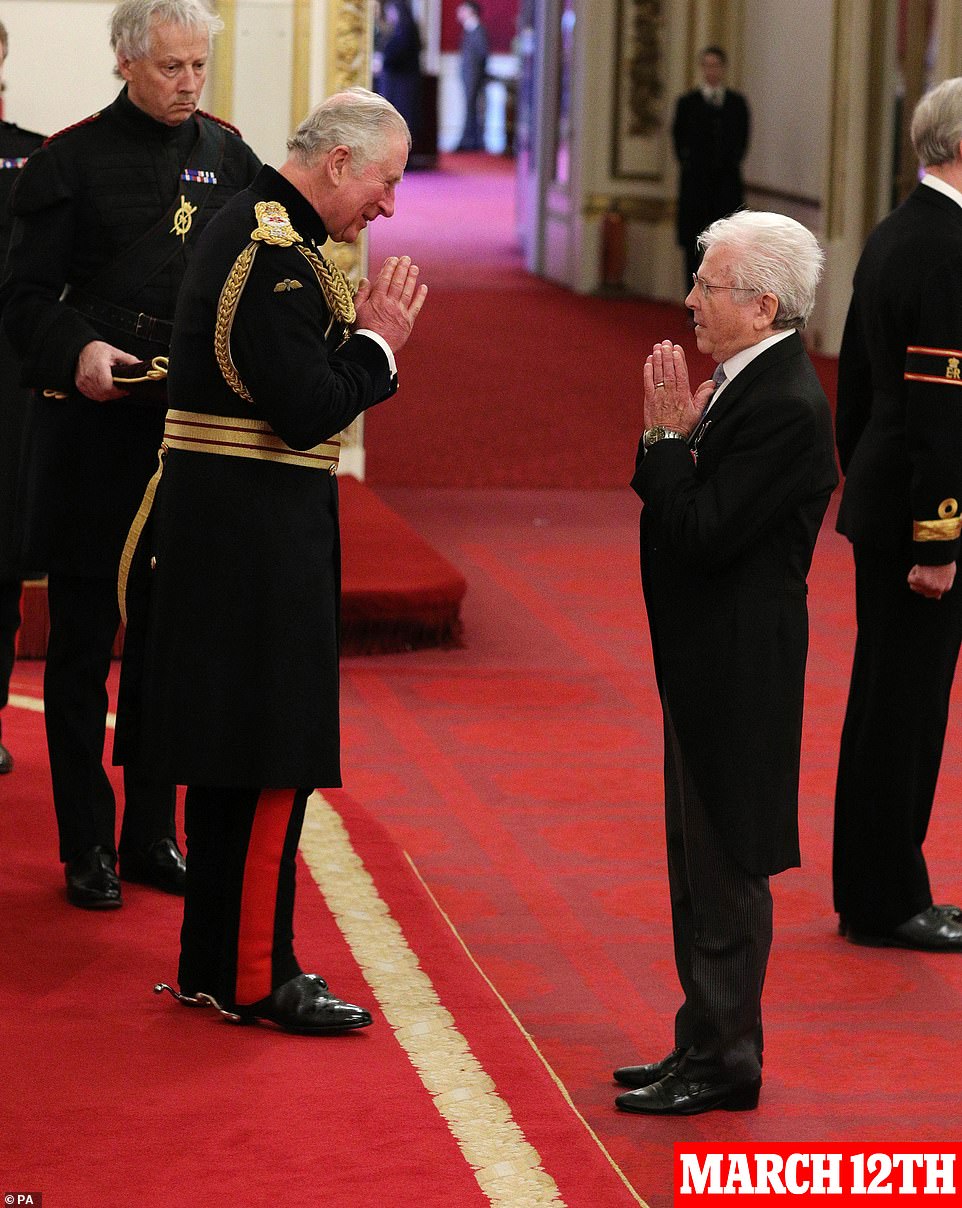 March 12: Charles stood in for his mother on investiture day 13 days ago – and saw his mother ‘briefly’ at Buckingham Palace that day 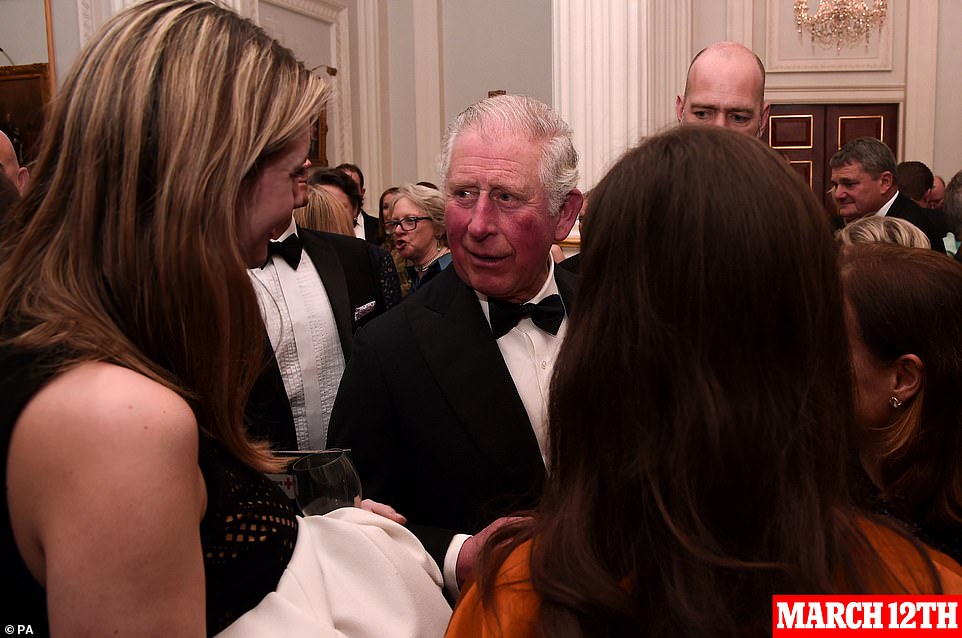 March 12: The Prince of Wales meets guests at a dinner at Mansion House in London, where he was guest of honour

MailOnline has also plotted the prince’s movements over the past 16 days and he attended at least six public engagements meeting hundreds of people.

Where are senior members of the Royal Family staying during the coronavirus outbreak?

The Queen: Travelled from Buckingham Palace to Windsor Castle on Thursday, March 19

Prince Charles and Camilla: Flew from Clarence House in London to Balmoral in Aberdeenshire by RAF plane on Sunday, March 22

Prince William and Kate: Moved from Kensington Palace to Amner Hall in Norfolk with George, Charlotte and Louis

Prince Harry and Meghan: Staying on Vancouver Island in Canada with their son Archie

These included a string of Britain’s biggest stars at his annual Prince’s Trust awards at the Royal Albert Hall two weeks ago – the start of the coronavirus 14-day incubation period.

The Prince of Wales was last at Buckingham Palace on March 12  to carry out investiture on behalf of the Queen, who he also ‘briefly’ met.

His coronavirus diagnosis will raise fears for the health of elderly royals including his mother and Prince Philip, 98, who are together at Windsor Castle, especially because of the high death rate among the elderly.

Charles is understood not to have seen his father for many weeks, possibly during the Megxit crisis talks at Sandringham, where his 98-year-old father was based until he flew by helicopter to Windsor last Thursday.

William and Kate are at Anmer Hall in Norfolk, while Harry and Meghan are back in Canada, after both couples saw Charles at the Commonwealth service at Westminster Abbey on March 9.

At the service no members of the royal family shook hands, with the Prince greeting people with Namastes and the Duke of Sussex elbow bumping Craig David.

Arriving at the Prince’s Trust awards a fortnight ago, Charles twice extended his hand to greet people before withdrawing it at the last minute in mock horror and greeting then with a bow and the Hindi greeting ‘Namaste’.

Turning to Dame Martina Milburn, the Trust’s chief executive, the prince said: ‘It’s just so hard to remember not to.’

On the evening of March 12, after investitures at Buckingham Palace, The Prince of Wales with the Lord Mayor of the City of London and the High Commissioner for Australia at a Mansion House dinner in London, his last known public engagement.

But he did have a number of private meetings with Highgrove and Duchy individuals, all of whom have been made aware of his illness.

He flew to Birkhall, his Balmoral home, with Camilla on March 22 – around the time he started feeling unwell.

Charles had been displaying ‘mild symptoms’ over the weekend before being tested on Monday.

A royal source has said that medical advice given to the prince is that it is unlikely to escalate into a more serious case.

WHAT IS THE RISK OF CORONAVIRUS TO A 71-YEAR-OLD MAN SUCH AS PRINCE CHARLES?

Older people are known to be most vulnerable to the coronavirus because they have weaker immune systems, which makes it harder for them to fight off any infection.

It is unclear if Prince Charles, 71, has any underlying health conditions that may raise his risk.

Chinese researchers, who carried out the world’s biggest study on COVID-19 patients, warned the risk of patients in their 70s dying was around eight per cent.

The team, who analysed data from 72,000 coronavirus cases, found the overall case-fatality ratio, the percentage of patients who die, was just 2.3 per cent.

British health officials say the death rate is likely to be much lower because there are tens of thousands of patients who won’t be diagnosed because their symptoms are so mild.

What is the death rate for COVID-19 for different age groups?

The same study also found the case-fatality ratio was higher for men (2.8 per cent) than women (1.7 per cent), a finding that has been echoed across the world.

Scientists say they don’t know why women seem less likely to die, but have suggested they naturally tend to have stronger immune systems and are less likely to have long-term health conditions.