Prime Minister Boris Johnson and Labour leader Sir Keir Starmer have arrived at Westminster Abbey in London for the annual Sunday service marking the 80th anniversary of the Battle of Britain.

Mr Johnson, along with Chief of the Air Staff, Air Chief Marshal Mike Wigston, will give a reading at the venue’s first major service since March.

Marshal of the Royal Air Force Lord Stirrup representing the Prince of Wales and U.S. ambassador to Britain, Woody Johnson, are also among those attending. 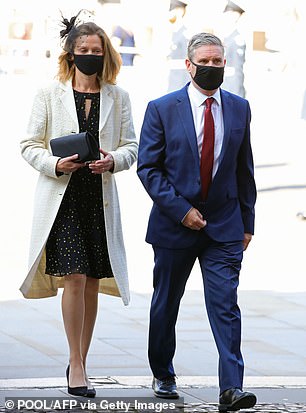 Prime Minister Boris Johnson, left, and Labour leader Sir Keir Starmer, right, have arrived at Westminster Abbey in London for the annual Sunday service marking the 80th anniversary of the Battle of Britain

Chairs for around 79 invited guests, who are all wearing masks, have been placed at the transepts of the church close to the altar.

Each chair has been spaced two metres apart to allow social distancing, with protective plastic screens separating the north and south transepts.

The annual Sunday service usually attracts around 2,000 people to the London landmark as the UK commemorates the first battle in history fought entirely in the air during the Second World War.

However, this Sunday’s event will see attendance significantly reduced and social-distancing measures in place – with the abbey vowing the service will be ‘reduced in stature but not in spirit’.

A spokesperson said: ‘The Abbey is a very large church, it usually holds 2,200, so the guests will be easily spaced out to conform with social distancing.’ 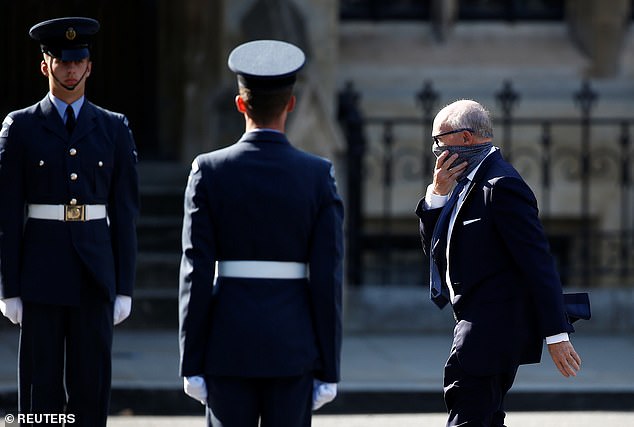 Woody Johnson, U.S. ambassador to Britain arrives at Westminster Abbey ahead of the ‘Service of Thanksgiving and Rededication to mark the 80th anniversary of the Battle of Britain’, today 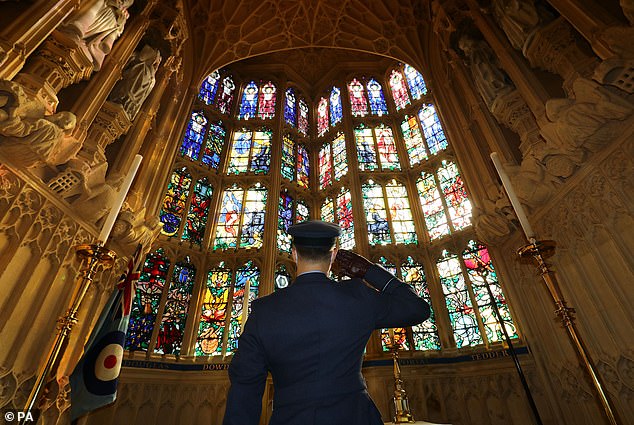 It is the first major service to take place at Westminster Abbey since the Commonwealth Day service held earlier this year on March 9, two weeks before the UK went into lockdown in response to the pandemic.

The 11am service led by Dr David Hoyle – the Dean of Westminster Abbey, includes an act of remembrance, during which the Battle of Britain Roll of Honour bearing the names of 1,497 pilots and aircrew killed or mortally wounded in the battle will be borne through the church.

This will be followed by a procession of flags, readings, prayers and music – with a flypast over Westminster Abbey planned at the end of the service.

The Battle of Britain was a major air campaign fought in the skies over the UK in 1940, and although the battle took place between July and October, September 15 saw the British Royal Air Force (RAF) gain a decisive victory over the Luftwaffe in what was Nazi Germany’s largest daylight attack.