Yazmin Oukhellou looked nothing short of sensational as she graced the red carpet at the Pride of Britain Awards in London on Monday evening.

Yazmin, who has been open about her mental health since the fatal crash which killed boyfriend Jake McLean, posed up a storm before heading into the emotional awards ceremony.

Gorgeous: Yazmin Oukhellou looked nothing short of sensational as she graced the red carpet at the Pride of Britain Awards in London on Monday evening

The ensemble featured a boat neck and clung to her incredible figure and she added extra height to her frame with a pair of perspex heels.

Yazmin accentuated her features with a gorgeous palette of make-up and swept he brunette tresses high into a bun.

Keeping her accessorises simple and letting the outfit speak for itself she wore a silver bracelet and toted a matching metallic clutch. 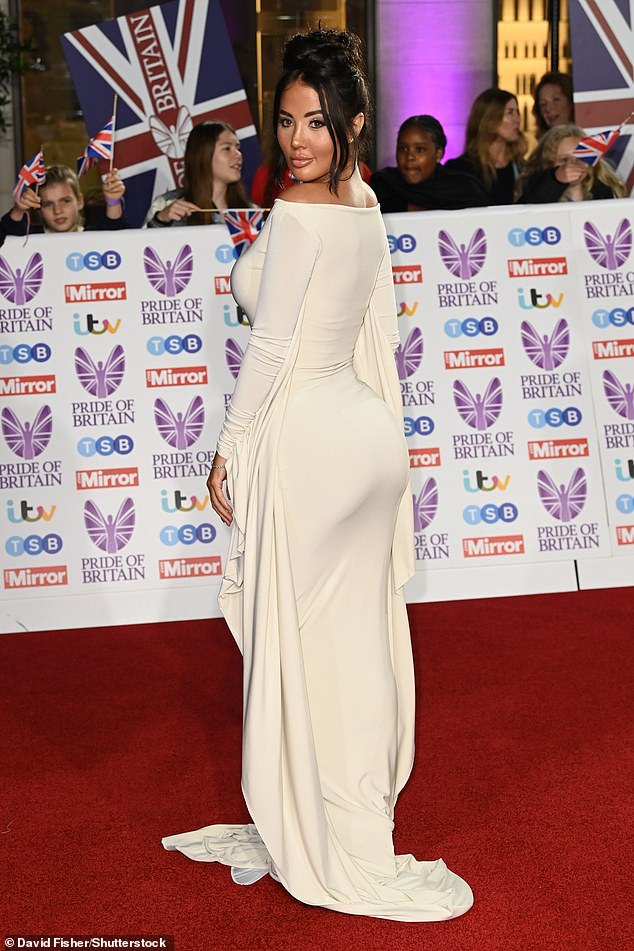 The annual Pride of Britain Awards return for a 23rd year at London’s Grosvenor House on Monday evening, with Carol Vorderman and Ashley Banjo co-hosting the star-studded affair.

Taking place since 1999, the ceremony honours the achievements of truly remarkable people from across the UK and all walks of life – nominated by members of the public.

After a shortlist has been produced from the thousands of entries, winners are chosen by the Pride of Britain judging panel. 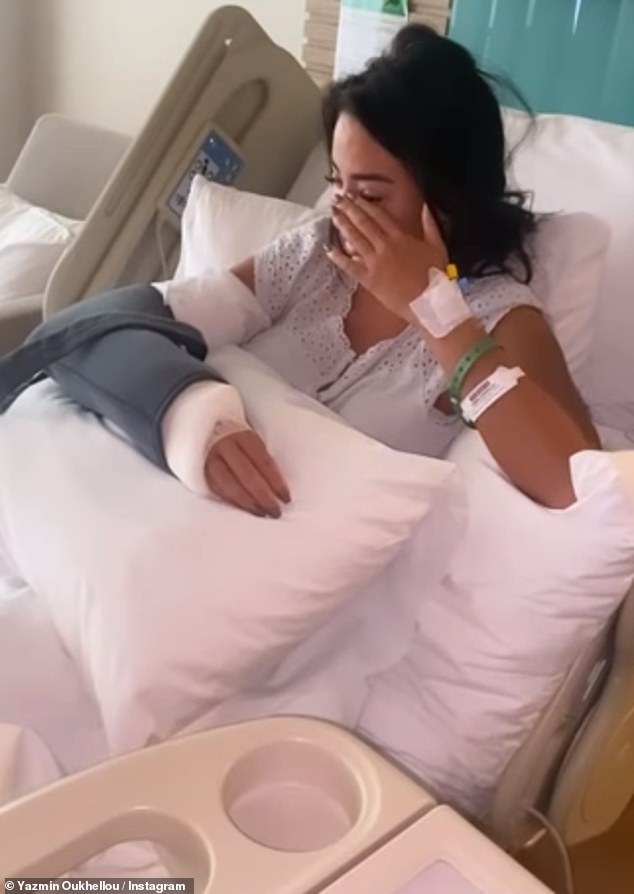 ‘It was the lowest I’ve ever been in my life’: It comes after Yazmin detailed her mental health battle as she shared a video from her hospital recovery following the fatal Turkey crash which killed boyfriend Jake McLean

Despite taking place on Monday evening, the ceremony will be aired on ITV on Thursday 27 October at 8pm.

She detailed her recovery from the traumatic crash which killed her boyfriend Jake McLean earlier this year, describing it as the ‘lowest I’ve ever been in my life’.

Yazmin accompanied the post with a video from her time in hospital as she recovered from the harrowing ordeal, during which she severed an artery and a nerve in her right arm. 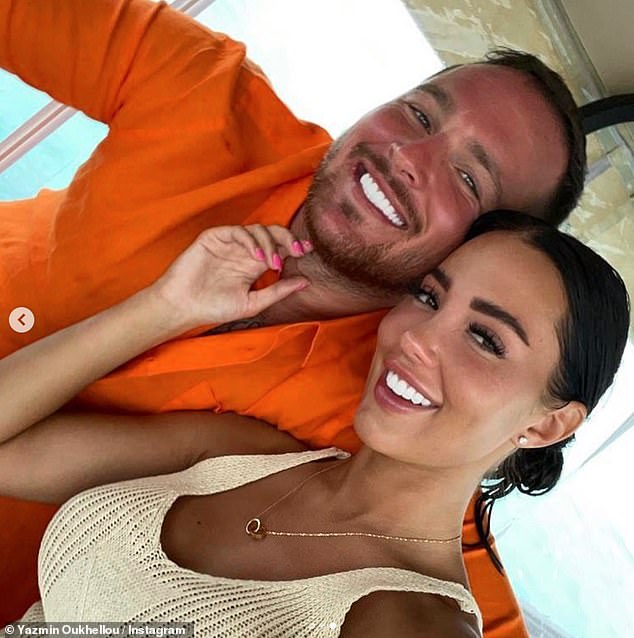 Awful: Jake was killed when his blue Mercedes E class saloon crashed, while Yazmin was left with serious injuries after she had to break her own arm to escape the wreckage as Jake was in the driving seat unconscious (pictured together earlier this year)

She explained that the video was taken by her mum Lisa, who filmed her daily while in hospital to send to her dad Hamid as updates on her recovery.

Penning: ‘Last week my mum shared this video with me which she sent to my dad during my time in hospital as she updated him daily. I was unaware it was being taken at the time but am glad I have this to see just how far I’ve come.’

Encouraging her followers that they can ‘get through anything’, Yazmin detailed her mental health struggle following the crash. 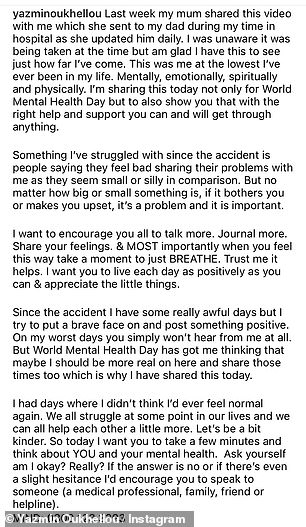 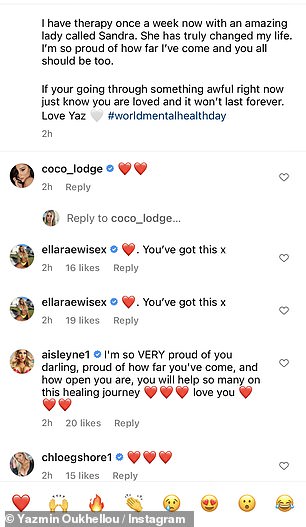 Opening up: The reality star shared that while she wasn’t aware that the videos were being taken – she’s glad to look back on them

‘This was me at the lowest I’ve ever been in my life. Mentally, emotionally, spiritually and physically. I’m sharing this today not only for World Mental Health Day but to also show you that with the right help and support you can and will get through anything.

‘Something I’ve struggled with since the accident is people saying they feel bad sharing their problems with me as they seem small or silly in comparison. But no matter how big or small something is, if it bothers you or makes you upset, it’s a problem and it is important.’ 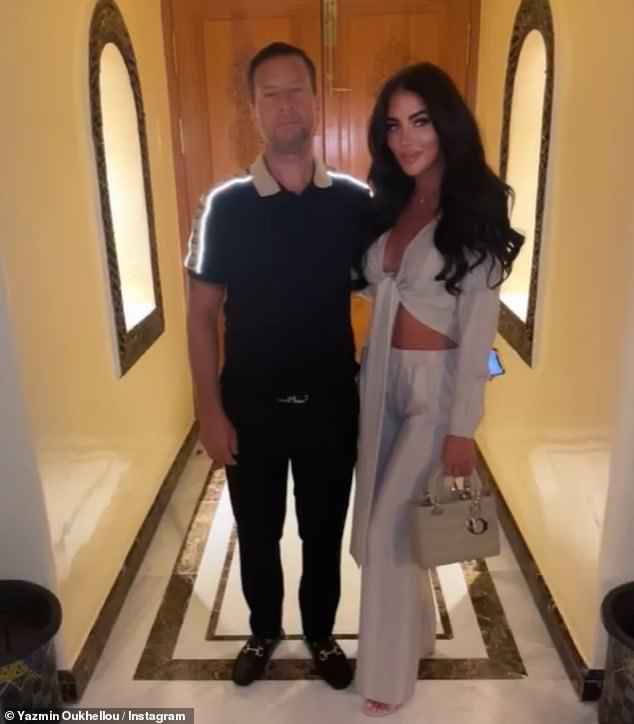 Parents She explained that the video was taken by her mum Lisa, who filmed her daily while in hospital to send to her dad Hamid as updates on her recovery (pictured with her dad Hamid)

‘I want to encourage you all to talk more. Journal more. Share your feelings. & MOST importantly when you feel this way take a moment to just BREATHE. Trust me it helps. I want you to live each day as positively as you can & appreciate the little things.

‘Since the accident I have some really awful days but I try to put a brave face on and post something positive. On my worst days you simply won’t hear from me at all.

‘But World Mental Health Day has got me thinking that maybe I should be more real on here and share those times too which is why I have shared this today.’

Concluding: ‘I had days where I didn’t think I’d ever feel normal again. We all struggle at some point in our lives and we can all help each other a little more. Let’s be a bit kinder.

‘So today I want you to take a few minutes and think about YOU and your mental health. Ask yourself am I okay? Really? If the answer is no or if there’s even a slight hesitance I’d encourage you to speak to someone (a medical professional, family, friend or helpline).

‘I have therapy once a week now with an amazing lady called Sandra. She has truly changed my life. I’m so proud of how far I’ve come and you all should be too. If your going through something awful right now just know you are loved and it won’t last forever. Love Yaz  #worldmentalhealthday’.

Jake was killed when his blue Mercedes E class saloon crashed, while Yazmin was left with serious injuries after she had to break her own arm to escape the wreckage as Jake was in the driving seat unconscious.

The crash took place at around 4.30am and investigators have established that the car hurtled around 70 feet over a left turn bend and landed in a ravine almost 30 feet below. 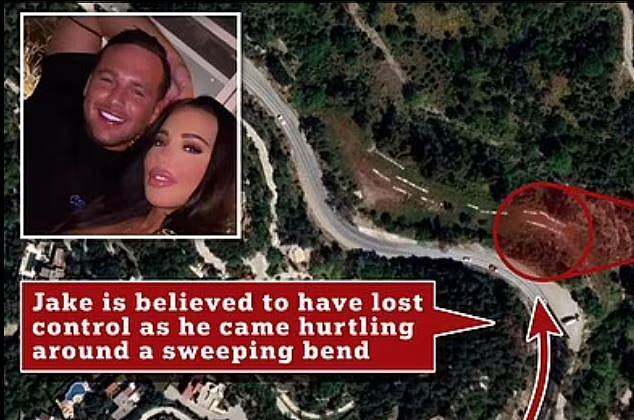 Shocking: Jake died after crashing his car off a road near the party resort of Bodrum, in Turkey