By Sean Poulter And Matt Oliver For The Daily Mail

Online fast-fashion giant PrettyLittleThing has been criticised for selling dresses for as little as 8p in its Black Friday sale.

Shoppers accused the brand of fuelling the throwaway culture and killing the high street with deals promising 99 per cent reductions.

The website was littered with items selling for less than £1 on Friday, including a baby blue polyester off-the-shoulder bodycon dress, which was marked down from £8 to 8p. Trousers were on sale for as little as 15p.

The brand is owned by Boohoo, which was offering 90 per cent discounts, with dresses selling for only £2. 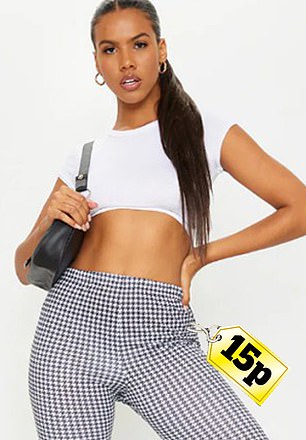 Online fast-fashion giant PrettyLittleThing has been criticised for selling dresses for as little as 8p in its Black Friday sale. Shoppers accused the brand of fuelling the throwaway culture and killing the high street with deals promising 99 per cent reductions

This year Boohoo was accused of paying employees as little as £3.50 an hour and forcing staff to continue working in shoddy conditions, even after some tested positive for coronavirus.

On Thursday the company brought in retired judge Sir Brian Leveson to examine its supply chain and ethics. Shoppers condemned the ultra-low prices on social media.

India Ysabel wrote on Twitter: ‘A 99 per cent off sale ?? That’s got slave labour written all over it.’

User @halsadiya_ complained: ’99 per cent off PrettyLittleThing is actually disgusting. The amount of clothes that are gonna be bought for the sake of it, not to be worn and just get chucked in a few months.’

Some Twitter users criticised the fast-fashion brands massive discounts, questioning what such low prices would mean for the garment workers that produced the clothes

In recent years, fast-fashion brands like PrettyLittleThing have increasingly come under fire for the detrimental impact of producing low quality garments that will end up in landfill, as one Twitter user suggested would be the fate of many of the sale items purchased today

However, many customers, who tend to be young women and teens, were excited about the deals.

Several complained that most of the first wave of 99 per cent reductions appeared to have been sold out in 30 minutes.

A PrettyLittleThing spokesman said: ‘After a bleak 2020 for most of us, we wanted to offer something competitive and understand people may be spending less in what is usually peak shopping season.’