A Tory MP was today criticised for peddling ‘misleading’ claims about Covid jabs on social media.

Andrew Bridgen, who represents North West Leicestershire, tweeted about an essay in a publication affiliated to the prestigious British Medical Journal.

‘The roll out must be suspended and children must not be put at risk through these experimental mRNA treatments.’

Andrew Bridgen, who represents North West Leicestershire, tweeted about an essay in a publication affiliated to the prestigious British Medical Journal 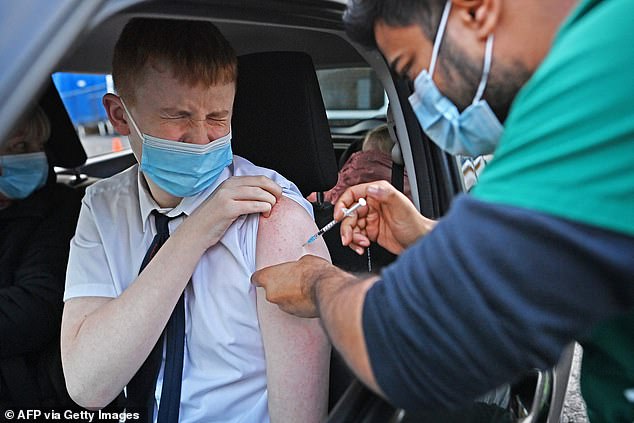 The essay itself , published on December 5, backs up evidence that jabs offer little benefit to preventing severe illness in younger people, who face a tiny threat from the virus itself. Pictured, a youngster getting a vaccine at a drive-through centre in Blackburn

It gained almost 2million views, with thousands of users of the social media platform praising Mr Bridgen for ‘speaking out’. One even described Mr Bridgen, 58, as being ‘on the right side of history’.

But the BMJ today hit back at Mr Bridgen, arguing his comment was ‘misleading for several reasons’.

A spokesperson for the publication, launched in 1840, said: ‘The JME aims to further the ethical analysis of key issues in healthcare.

‘The views, analysis, and conclusions reached in its content belong to the authors, not the journal itself.

‘The article develops an argument about the ethics of mandatory Pfizer-BioNTech and Moderna Covid vaccine booster doses in some American universities.

‘It does not claim that Covid vaccines are unsafe, only that based on the available evidence, the risk-benefit ratio doesn’t justify mandating booster shots in college students, in the authors’ opinion.’

The essay itself, published on December 5, backs up evidence that jabs offer little benefit to preventing severe illness in younger people, who face a tiny threat from the virus itself.

It is for this reason that health chiefs have been reluctant to vaccinate children.

The JME piece looked specifically at younger adults — aged 18 to 29 — who face a slightly greater threat from the virus than infants.

Analysis estimated that up to 42,000 would need to get their third jab to prevent just one Covid hospital admission within a six month period.

Experts argued that for every hospitalisation prevented, 18.5 serious adverse events would be logged.

This includes cases of myocarditis, inflammation of the heart muscle.

The extremely rare complication is what spooked experts early on in the jab roll-out. But the majority of cases are mild and the virus itself can also cause the condition.

Mr Bridgen’s post gained almost 2million views, with thousands of users of the social media platform praising him for ‘speaking out’. One even described Mr Bridgen, 58, as being ‘on the right side of history’

One of five reasons listed was the policy ‘may result in a net harm to healthy young adults’.

The BMJ, which publishes 70 journals, pointed to a response to the same research, penned by university health chiefs.

The document highlighted ‘major concerns’, specifically that the study only looked at hospitalisation rates as the ‘primary measure of benefit’.

It stated: ‘Hospitalizations averted is not the only marker of morbidity relevant to the college student population.

‘We have also strived to minimize the risk of missed classes, severe illness, and need for prolonged medical leaves of absence given the potential adverse academic consequences of illness for students.

‘Colleges and universities have been trying to balance infectious disease mitigation efforts with the need for in-person learning, social interactions, and the increased mental health challenges caused by some of these efforts that furthered the experience of isolation.’

It is not the first time Mr Bridgen has faced criticism for his views on Covid vaccines.

Last month he claimed that someone in a ‘prominent leadership role’ in the British Heart Foundation (BHF) was ‘covering up clear data that reveals the mRNA vaccine increases inflammation of the heart arteries’.

Mr Bridgen presented no evidence to support his claims, other than it being from a ‘whistleblower from a very reliable source’.

The BHF argued it did not recognise Mr Bridgen’s comments and strongly refuted his allegations.

A spokesperson said: ‘We are committed to being completely independent, and take great care to be accurate and transparent with all public health information.

‘We would encourage those making serious allegations to share specific, credible information with us which supports them.’

It said its advice on vaccine was based on ‘rigorous scrutiny’ of the latest evidence, adding the benefits ‘greatly outweigh the risk of extremely rare side effects for the vast majority of people’.

Are Brits ALREADY turning to masks? Pictures show commuters wearing coverings amid flu and Covid outbreak after SAGE expert’s plea to ‘protect the NHS’ – as poll reveals nearly 60 PER CENT don’t want any return of one of the main pandemic-era curbs