Pressure on 999 crews could be eased by supplying care homes with £1,000 air cushions to lift patients, health minister says

By Shaun Wooller Health Editor For The Daily Mail

The NHS could supply care homes with £1,000 air cushions that help staff lift residents when they fall to ease pressure on ambulances.

Recently appointed health minister Will Quince said some homes place an unnecessary burden on emergency services by dialling for help rather than lifting residents themselves.

He told the Lords public services committee that ‘there are lots of tools available’ that can help staff, including an inflatable cushion akin to a small bouncy castle.

He said: ‘It’s not available in every care home as we, the NHS, haven’t made them available.

These devices slide flat under the patient on the floor and inflate slowly, raising them to their feet or a seated position.

Ambulance delays have seen pensioners left languishing for up to 15 hours waiting for crews to lift them.

Mr Quince said long waits were ‘unacceptable’ and ‘not where we need to be’.

Recently appointed health minister Will Quince said the NHS could supply care homes with £1,000 air cushions that help staff lift residents when they fall to ease pressure on emergency services

A previous study found each 999 call for an ambulance costs the NHS £7 and a further £252 if a vehicle has to attend and treat a patient at the scene before transferring them to hospital.

It costs an average of £160 to treat the patient in A&E and £303 for one night on a standard hospital ward.

Critical ambulance delays mean pensioners have been left languishing on the ground for up to 15 hours in the rain waiting for crews to lift them.

The NHS is set to deploy rapid response teams to those who have taken a tumble but not suffered serious injury.

They will treat patients on the scene in a bid to reduce unnecessary hospital admissions and take pressure off paramedics and A&Es this winter.

Mrs Pritchard said the new teams are likely to result in 55,000 fewer elderly people a year being taken to hospital.

A quarter of less severe 999 calls this January involved falls, she added.

There have been unprecedented delays for ambulances in the past few months, with crews forced to queue for hours outside hospitals to drop off patients as there are no beds to put them in. 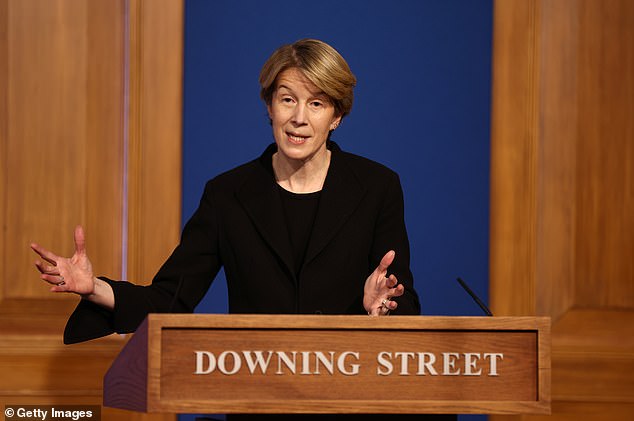 It has resulted in heart attack and stroke patients waiting hours for a 999 response.

In August, photographs showed David Wakeley, 87, under a makeshift shelter built to protect him from the weather after he fell at home in Cornwall and waited 15 hours for an ambulance.

Mrs Pritchard said fallers with serious injuries will still be taken to hospital but many do not need to be.

Mr Quince described the long delays for an emergency ambulance as ‘unacceptable’ and ‘not where we need to be’.

But he added: ‘Many doctors will tell you that many people are arriving at A&E who don’t need to be there.’