By Hugo Duncan for the Daily Mail

Premier League clubs face a ‘massive’ hike in their business rates bill next year after their grounds were revalued.

Commercial properties have seen an average 7.3 per cent rise in their ‘rateable values’, which are used to calculate the levy – but the average value for top flight football stadiums has jumped by nearly 50 per cent.

The revaluation will add £7million to the business rates bill paid by the 20 Premier League clubs – taking it from £26million to £33million.

Leeds United’s Elland Road saw the biggest increase in its rateable value – up 315 per cent – while Wolverhampton Wanderers and Brighton & Hove Albion have both seen rises of more than 250 per cent, according to analysis of government figures by business rates experts Altus Group.

All three clubs were promoted to the Premier League before the latest valuations took place last year having been in lower divisions at the time of the previous count in 2015 – boosting what the grounds are deemed to be worth.

The only club to enjoy a cut in its business rates bill is Aston Villa, with the rateable value of Villa Park sliding nearly 10 per cent, sending its bill down from £1.3million to £1.2million.

Tottenham Hotspur’s new stadium has the highest rateable value at more than £10million – landing it with a bill of £4.8million – followed by Manchester United ground, Old Trafford, at close to £9million.

At the other end of the table is Brentford, whose West London home has a rateable value of £335,000.

It means Brentford will pay just over £170,000 in business rates. A spokesman for Altus Group said ‘football clubs are being hit with massive tax rises next year’, adding that promoted clubs such as Leeds saw the biggest increases because of ‘all the riches’ Premier League status brings. 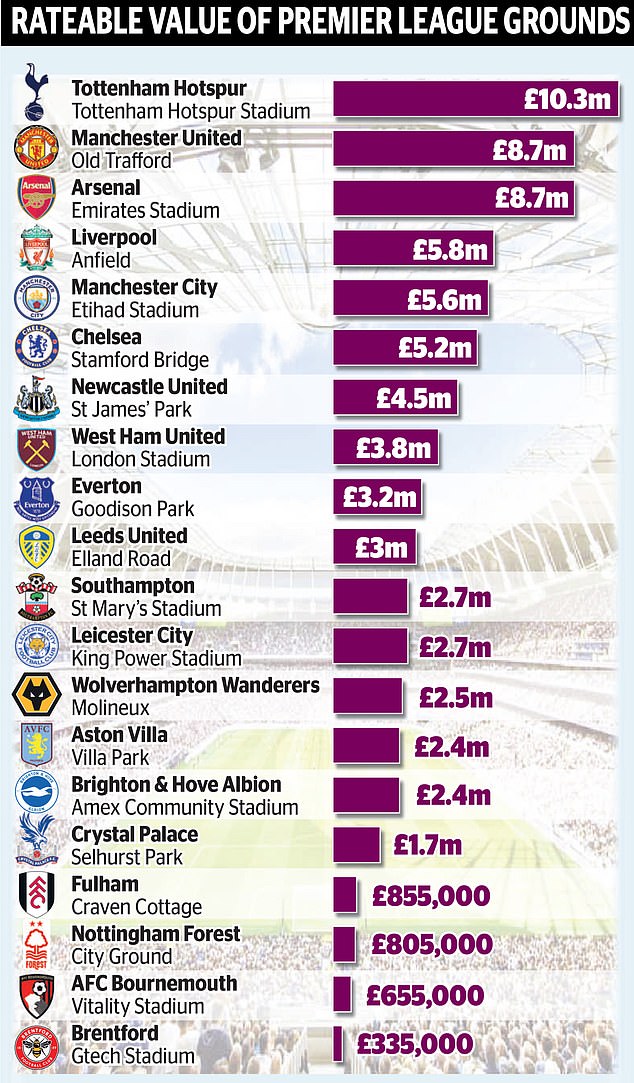 The bill is based on the rateable value of a property, which is set by the Valuation Office Agency and is typically based on the annual rent the property would attract on the open market.

For sports stadiums, it takes account of factors such as capacity and attendances. The tax is set to cost companies £28.5billion this year, rising to £35.9billion in 2027-28, according to documents published alongside last week’s Autumn Statement.

In the statement, Chancellor Jeremy Hunt said he would proceed with a planned revaluation of business properties from April 2023 so that bills ‘accurately reflect market values’.

This resulted in the business rates bill falling for many properties – with shops such as Harrods and Selfridges among the biggest winners due to the fall in the value of property on the High Street.

By contrast, the value of big football stadiums has risen as money pours into the sport.

The rateable value of the 20 Premier League grounds now stands at £75.7million, up 49 per cent since the 2015 valuation of £50.8million. Robert Hayton, UK president at Altus Group, said: ‘Valuations are complex and take into account not only the size or capacity of the stadium but their quality as well as attendances and income.’