Pregnant and post-partum women in the US are more likely to be murdered than to die of leading causes of maternal mortality.

The risk of homicide is higher than death from obstetric complications such as high blood pressure disorders, hemorrhage, and sepsis.

A deadly combination of intimate partner violence and easy access to firearms have caused the majority of these homicides, scientists at Harvard University and Massachusetts General Hospital in Boston said in a new report out Wednesday.

Pregnant women in America have long been those most vulnerable to domestic violence and murder.

Intimate partner violence is exceedingly common in the US.

About one in three American women have experienced violence of this type and one in seven have been injured by their partners.

Most intimate partner deaths in the US involve firearms.

In fact, recent estimates indicate that firearms were used in 68 per cent of women killed by partners around pregnancy between 2008 and 2019.

Pregnant women are considerably more likely to be killed by their partners than to die due to common pregnancy complications such as becoming septic or hemorrhaging. 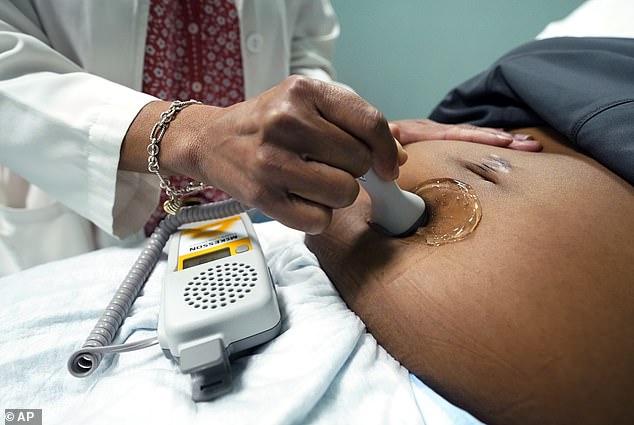 The majority of homicides involving pregnant women perpetrated by their partners are carried out using guns. The new study reported that as numbers of firearm homicides increase, gun violence has become a health emergency for pregnant women in the US.

Black women were at substantially higher risk of being murdered by their partners than were Hispanic and non-Hispanic white women.

‘With numbers of firearm homicides increasing in the US, gun violence has become a health emergency for pregnant women,’ authors of the report said.

What is added by this report?

Ending male violence against women, including gun violence, is an urgent priority for the health and safety of women everywhere

The US leads the developed world when it comes to maternal mortality.

Infection, or sepsis is also a leading cause of maternal death. From 2013 to 2016, 23 per cent of all maternal deaths were sepsis related.

Hypertensive disorders, which are very common during pregnancy, can be severe.

Federal tracking shows that among maternal deaths that occurred during delivery hospitalization between 2017 and 2019, nearly 32 per cent had a hypertensive disorder.

When tracking deaths among pregnant women in the United States, the CDC does not classify homicide, accidents or suicides as causes of ‘maternal mortality’.

People with greater access to firearms were more likely to use them against their partners, the report said.

The risk of intimate partner violence typically increases in areas where guns are easy to obtain.

President Joe Biden signed the bill in June. It included a wide range of policy initiatives meant to keep people safe and provide critical support to states and local governments working to tamp down gun violence.

Still, it fell far short of accomplishing what Democrats have been advocating for, such as universal background checks and a ban on military-style semiautomatic weapons.

In a major policy change, the new law closed the legal ‘boyfriend’ loophole. Federal law had already barred convicted domestic abusers from owning firearms, but that only applied to spouses, not dating partners.

Opponents on the right in Congress, including Colorado Republican Lauren Boebert, have already introduced legislation to quash the gun violence package.

Boebert, a staunch opponent of gun control measures, said the gun violence bill ‘Tramples on the constitutional rights of law-abiding citizens, and will have no significant impact in stopping mass shootings and deterring gun violence.’