The 38-year-old revealed on Today Extra it was a ‘scary’ experience when Brian, 48, was struck down with ulcerative colitis, which left him bedridden for six weeks.

‘We had just got back from Hawaii and Brian had an episode of ulcerative colitis. He has had it in the past but it’s been years since he has had anything come up,’ Sharna explained.

‘He was in bed for six and a half weeks. It really is debilitating,’ she added.

Sharna said she was ‘grateful’ Brian had ‘come out the other side’, because the disease can lead to other health problems.

‘It was scary and it was intense,’ she admitted.

According to the Mayo Clinic, ulcerative colitis is ‘an inflammatory bowel disease (IBD) that causes inflammation and ulcers (sores) in your digestive tract.

Ulcerative colitis affects the innermost lining of your large intestine (colon) and rectum. 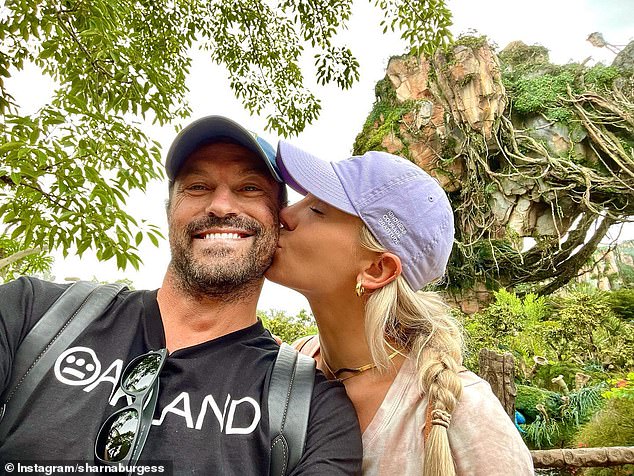 ‘He was in bed for six and a half weeks. It really is debilitating,’ she added

The Beverly Hills, 90210 star said he had ‘dealt with ulcerative colitis a few times’ and called it a ‘rough experience’.

Because of his issues with the disease, Brian has had to change his diet.

‘I try and avoid gluten and dairy as much as possible,’ he explained.

‘It’s really just dietary. Like, as long as I can keep things within my system that my body doesn’t think I’m poisoning it with, then it doesn’t fight back. 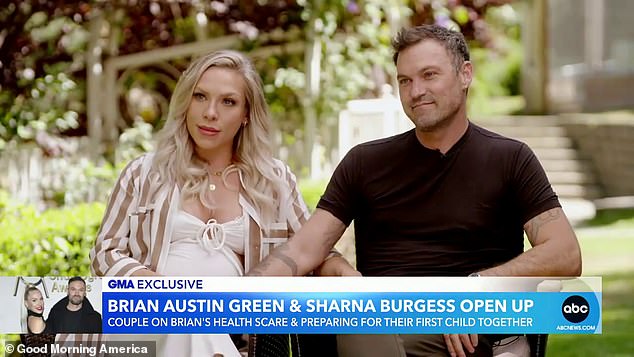 ‘I would eat food, and literally it was like, my body didn’t process any of that. So then, when you start playing catch up with, like, staying on top of being hydrated enough, that’s such a battle.’

On top of dealing with his health issues, Brian and Sharna are both preparing for the arrival of their first child together.

Sharna and Brian revealed the happy news back in February during their ‘babymoon’ to Hawaii.

He is also a father to son Kassius, 19, from a previous relationship. 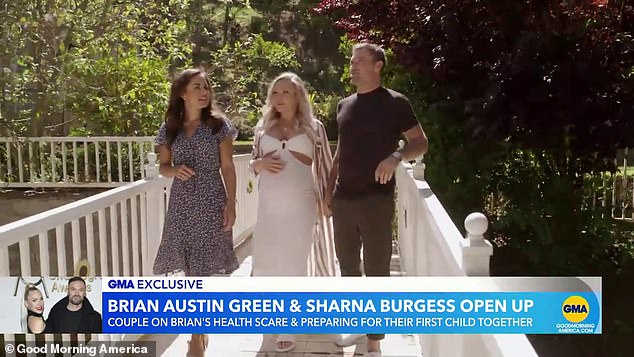 On top of dealing with his health issues, Brian and Sharna are both preparing for the arrival of their first child together