Beloved soap star and pregnant actress Jennie McAlpine revealed she and husband Chris Farr do not yet know the gender of their unborn child on Friday’s Loose Women.

The Coronation Street alum, 38, who has played Fizz Stape on the show since 2002, said the couple have decided to keep the gender a surprise until the birth.

Although she wasn’t able to share the baby’s gender, Jennie did tell the Loose Women panel that she was due to give birth at Easter time.

An Easter surprise: Jennie McAlpine, 38, and husband Chris Farr have not learnt the gender of their third child, who is due around Easter time

She said: ‘They will be my little Easter chick’.

Despite her excitement, she also admitted she had been given some words of warning about becoming welcome a third child into the world. 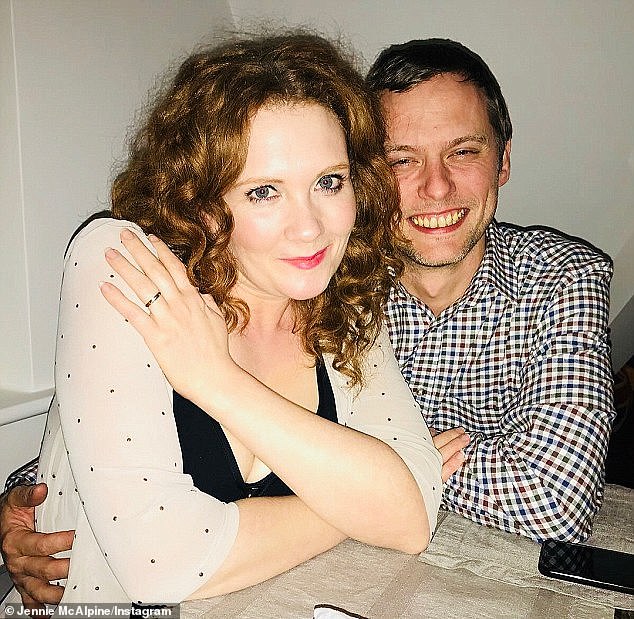 Proud parents: She is pictured with her husband Chris Farr 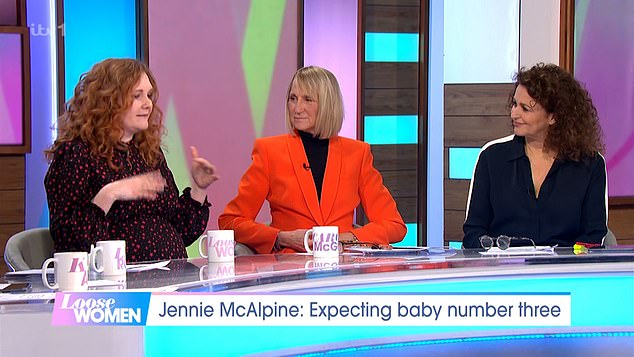 Third time’s a charm: The Corrie alum is already mother to Albert, eight, and Hilda, four

‘They say the chaos doesn’t treble, it just gets more chaotic.’

As well as having life-changing events occurring in her real life, her onscreen persona recently delighted fans by marrying her onscreen partner, Tyrone Dobbs on Christmas day.

However, the Corrie favourite told the panel she did not enjoy filming the wedding scene, as she doesn’t like being the centre of attention.

She explained her strong aversion to attention is why she and husband Chris chose to elope in 2017.

She said: ‘I know that sounds weird as an actress but I don’t enjoy being the centre of attention.’

‘Corrie is usually like a big team, but when you’re the bride you feel a bit more exposed. I didn’t have a big wedding with many guests in real life and I believe an element of [feeling exposed] played a role in that’. 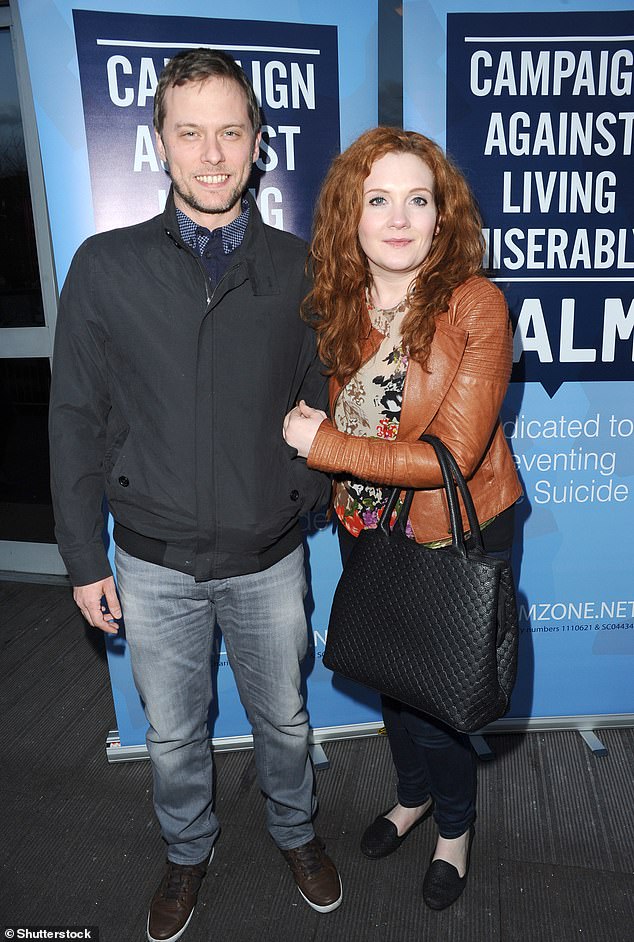 Eloped: Jennie revealed that her and Chris chose to have a very small wedding due to her dislike for attention (pictured 2016) 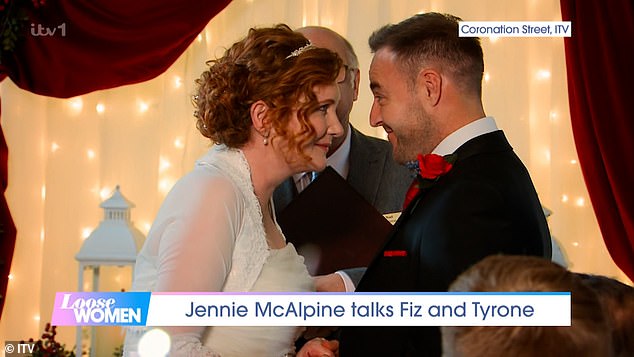 A day not to remember: The soap star did not enjoy filming Fizz’s wedding to onscreen sweetheart Tyrone as she hates being the centre of attention

Despite her character Fizz being adored by Corrie fans across the nation, Jennie revealed her son Albert, eight, was not impressed by his famous mum.

She joked: ‘Albert is football obsessed, if I’m not part of the starting 11, I’m not relevant to him’.

Fizz fans may be disappointed to learn they won’t be seeing many pictures of the family post birth, as the star has revealed she has deleted her social media accounts.

While she did say she had some trolls, she insisted that wasn’t the reason she deleted it.

She said: ‘I had a few people making horrible comments, like everyone, but that’s not why I got rid of it’

‘I never loved social media. I never understood it and I’m a bit rubbish with technology…I feel a lot better without it’. 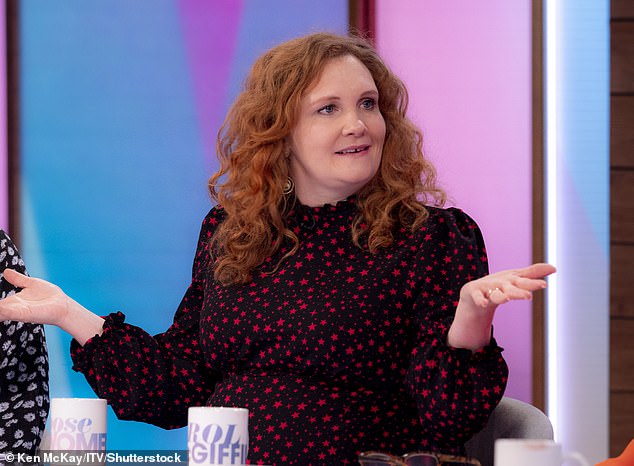 Jennie announced she was expecting her third child on January 2.

The actress, who is six months pregnant, told OK! magazine: ‘It just feels really nice. We’re so over the moon. The thought of adding to our family mix and chaos was the best Christmas present! I’m really excited for 2023 – it’ll be a special one.’

She explained how she discovered her baby news while enjoying a camping trip with Chris and their children.

Feeling nauseous, the former I’m A Celebrity campmate decided to take a pregnancy test, and soon realised she’s had a bun in the oven for about five weeks. 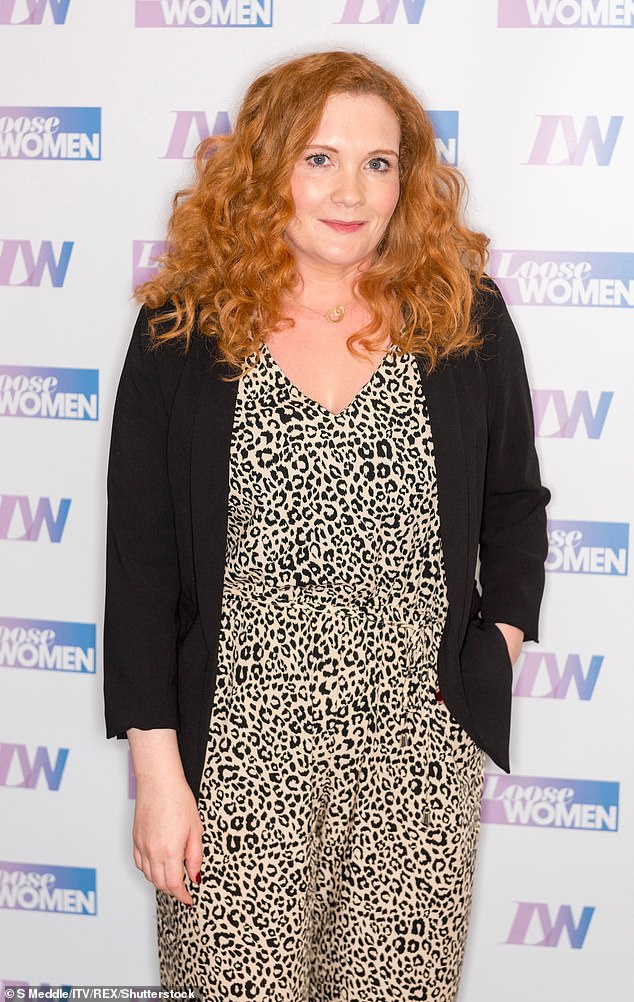 Congratulations: Jennie announced she was expecting her third child with husband Chris on January 2 (pictured in 2019)

Her daughter’s name Hilda was inspired by Corrie character Hilda Ogden, who was played by the late Jean Alexander.

And this time around, the soap star has confessed: ‘I can probably guarantee that whatever the name we choose, it will have been a character in Corrie – I don’t know how to avoid it!’

Jennie continued to work throughout her last pregnancy, and revealed the creative way producers managed to hide her growing baby bump on the ITV soap.

‘We started with a mug and then we went on to a handbag and last week, I’m not kidding, with a Ford Fiesta!’ she said on Lorraine.

She explained laughing that producers would ask for a car to be moved further down the street with the sole purpose of covering her bump.

The TV personality added that she only has a few weeks of filming left before she goes on maternity leave.

‘A couple of weeks left filming, I think this might be my last trip to London,’ she said. 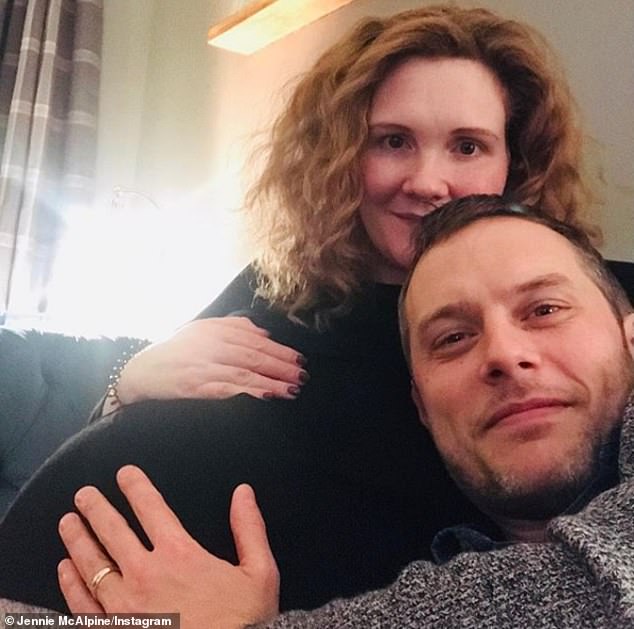 Radiant: Jennie told how the couple are hoping for a surprise when it comes to finding out the baby’s gender, unlike her first two pregnancies (pictured while pregnant with Hilda)