Pregnant Billie and Greg Shepherd have finally moved into their £1.4m Essex mansion after three years of renovations and rows with neighbours.

The couple, who are parents to two other children, Nelly, eight, Arthur, five, have been busy renovating the four-bed 1920s property and have said they would not have bought the property if they had their time again.

Billie, 32, and Greg, 37, shared a picture of them standing on the doorstep of their new home and wrote on social media: ‘WE MADE IT… ❤️ Three years in the making we have finally moved into our new home. ❤️

‘Highs and lows and a LOT of arguments along the way’: Pregnant Billie and Greg Shepherd have FINALLY moved into their £1.4 Essex mansion after three years of renovations and rows with neighbours 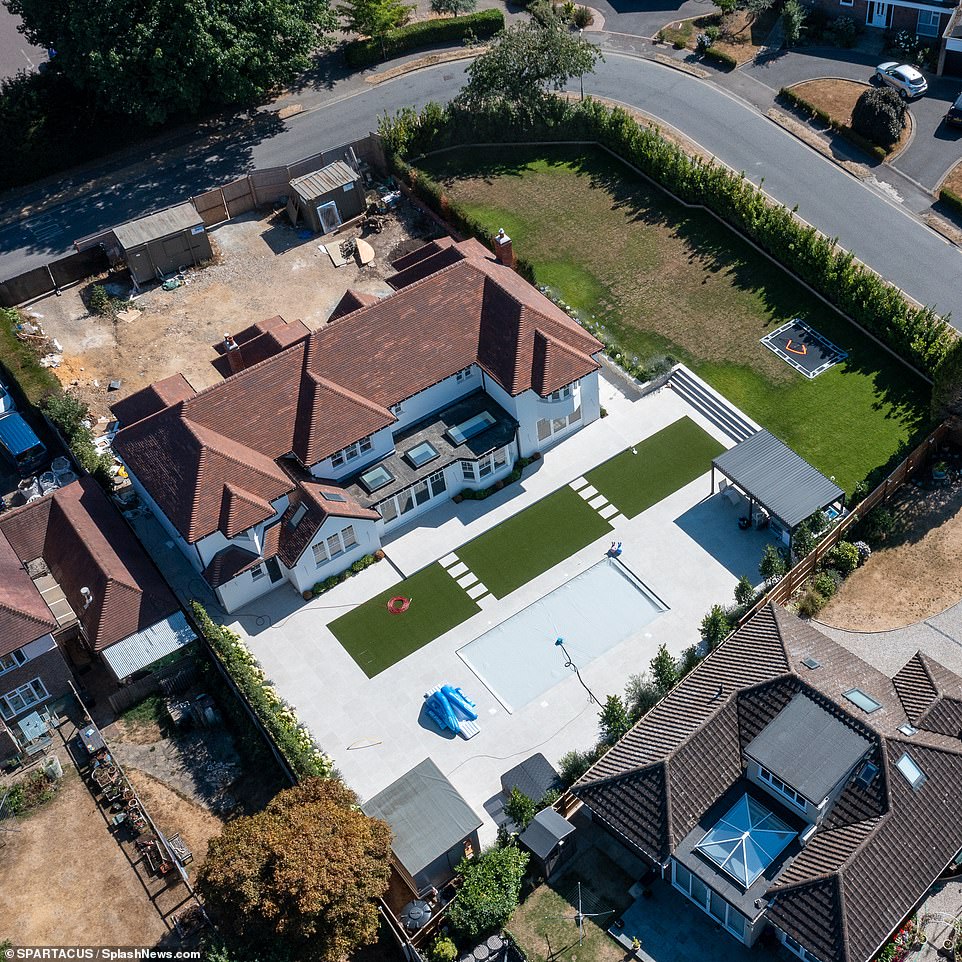 Wow! A large swimming pool can be seen in a recent aerial shot, as well as a an inground trampoline and Sala seating area 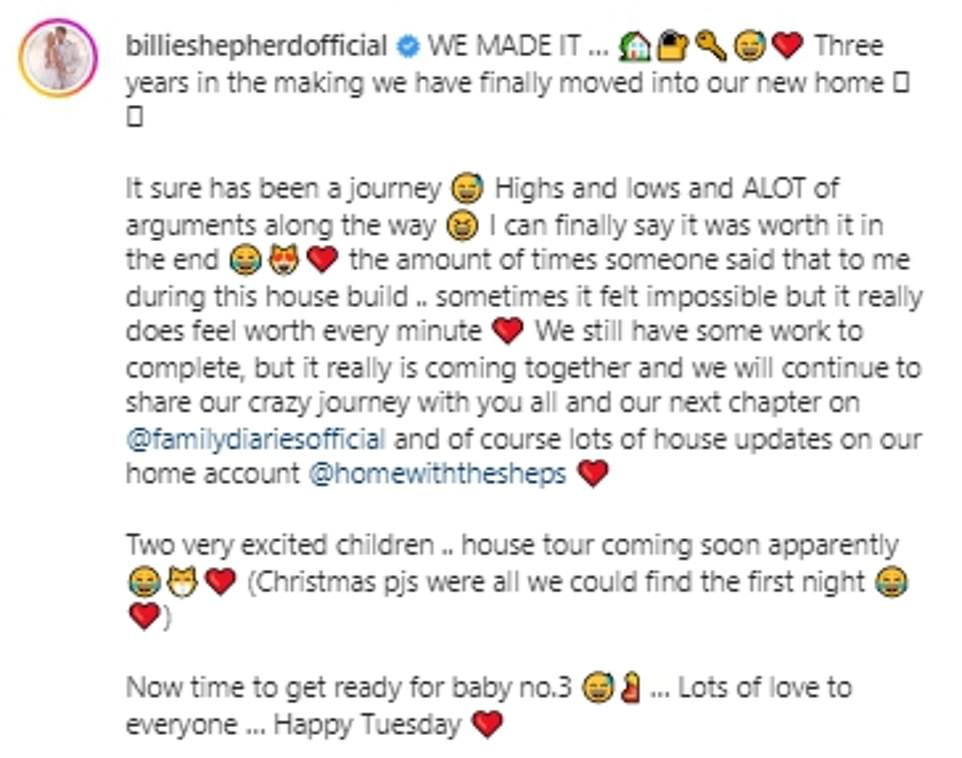 Something to say: Billie updated her fans on the move, admitting it hadn’t all been plain sailing along the way

‘It sure has been a journey. Highs and lows and ALOT of arguments along the way. I can finally say it was worth it in the end ❤️ the amount of times someone said that to me during this house build .. sometimes it felt impossible but it really does feel worth every minute ❤️. 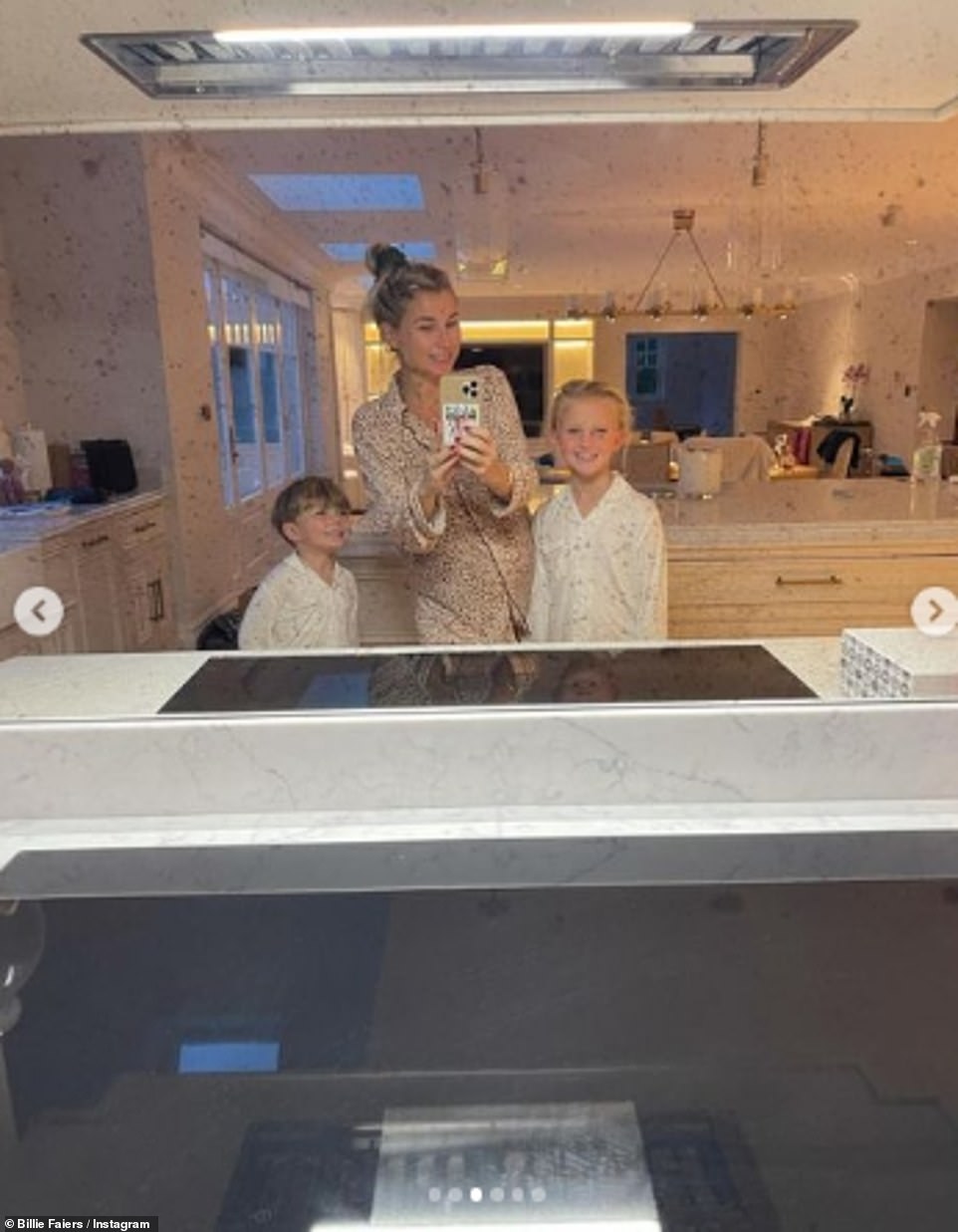 Updates pending: Billie also shared a picture of their giant minimalist kitchen and a video of the children happily dancing on their beds 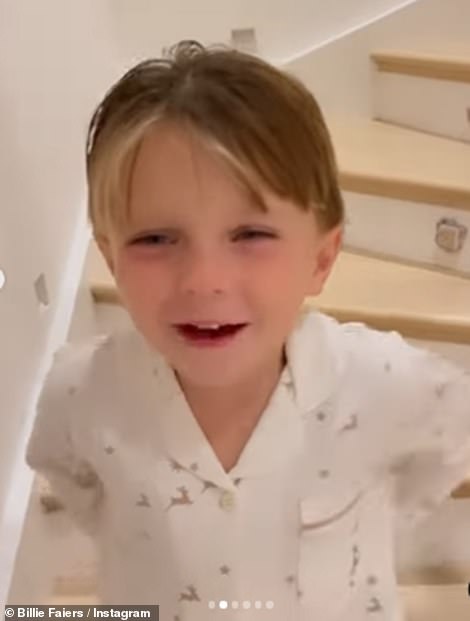 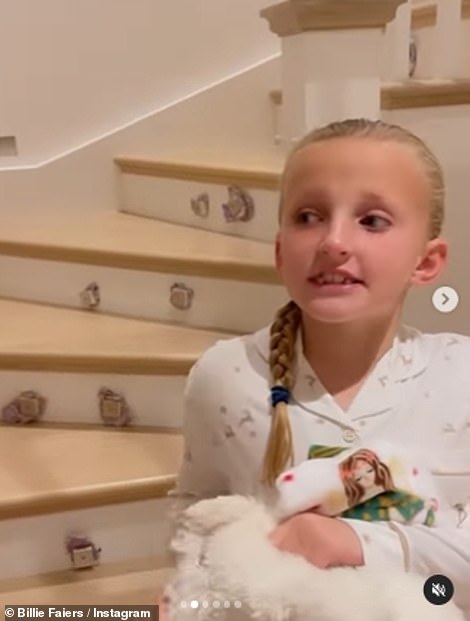 Exciting times: Arthur, (left) and Nellie, (right) wore matching xmas pyjamas as they settled into their new home as that’s all their parents could find as everything was packed up 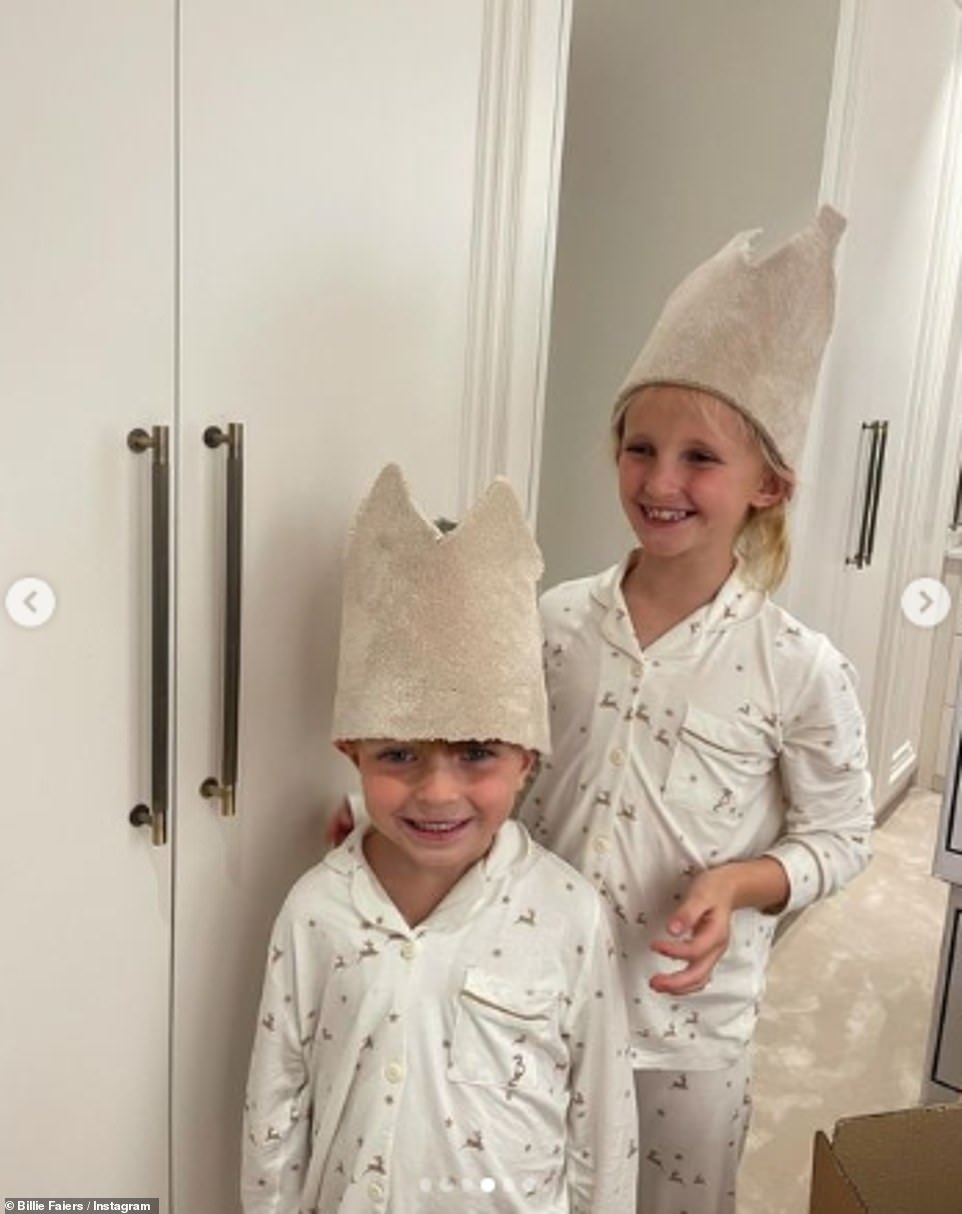 Giggling: They looked like they were having lots of fun as they made hats out of carpet offcuts 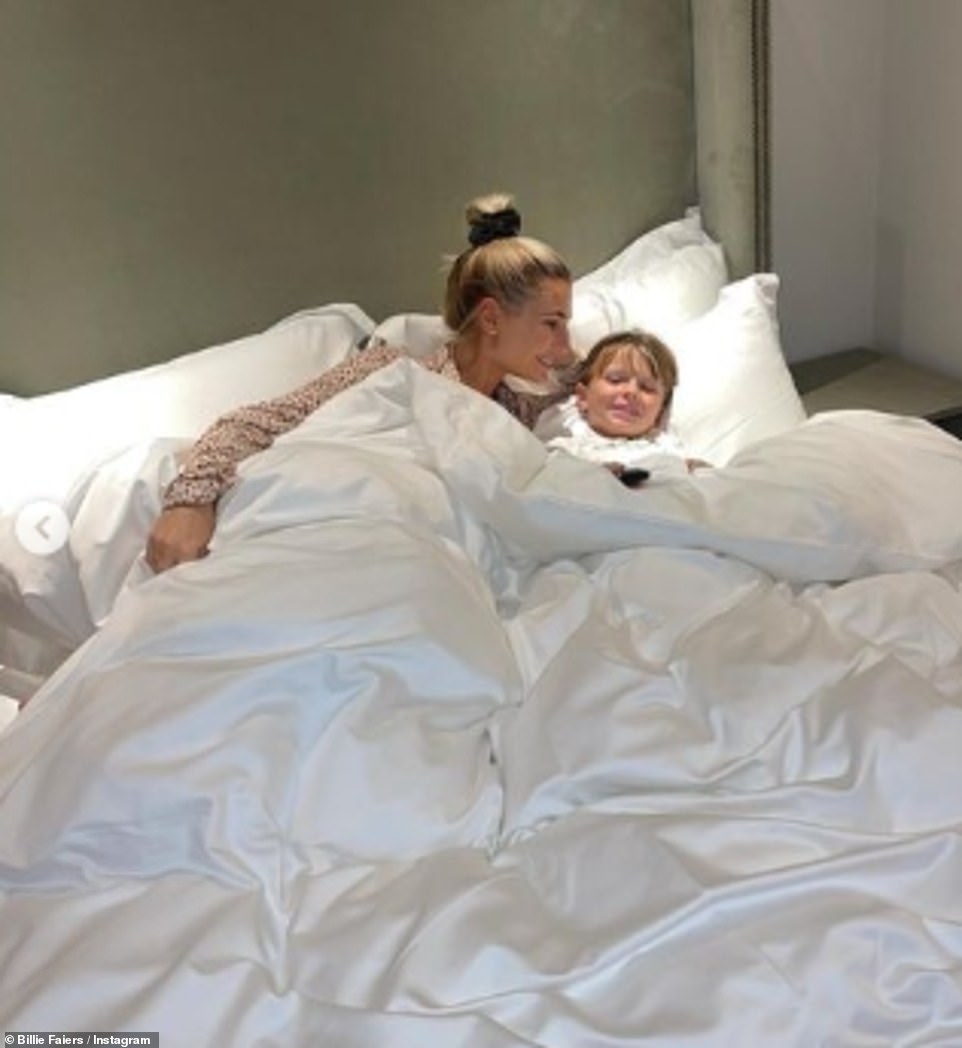 Get in your own bed: Billie also shared a picture of Arthur sneaking into her bed

‘Now time to get ready for baby no.3 … Lots of love to everyone … Happy Tuesday ❤️.’

Billie also shared a picture of their giant minimalist kitchen and a video of the children happily dancing on their beds.

The family also shared a video of their home account showing untold amounts of boxes going into the enormous property as removal men were parked on the drive.

The couple had planned to create a five-bed home with a two-storey extension, gym, games room and huge walk-in wardrobe in the style of the Kardashians but they were refused permission amid a row with neighbours.

Local residents had said the works were ‘excessive’ and not in keeping with other properties on the street but updated plans were then approved.  Their new home boasts a swimming pool, jacuzzi and fire pit.

The family were pictured checking on the progress of their home in August when it was almost complete.

They bought the Brentwood property in January 2021 and have spent the past 19 months renovating it drastically but it was reported that they were ‘at war’ with their neighbours over the ongoing renovations.

In July, Billie and Greg couldn’t hide their upset after learning renovations to their dream home were 24 weeks behind schedule. 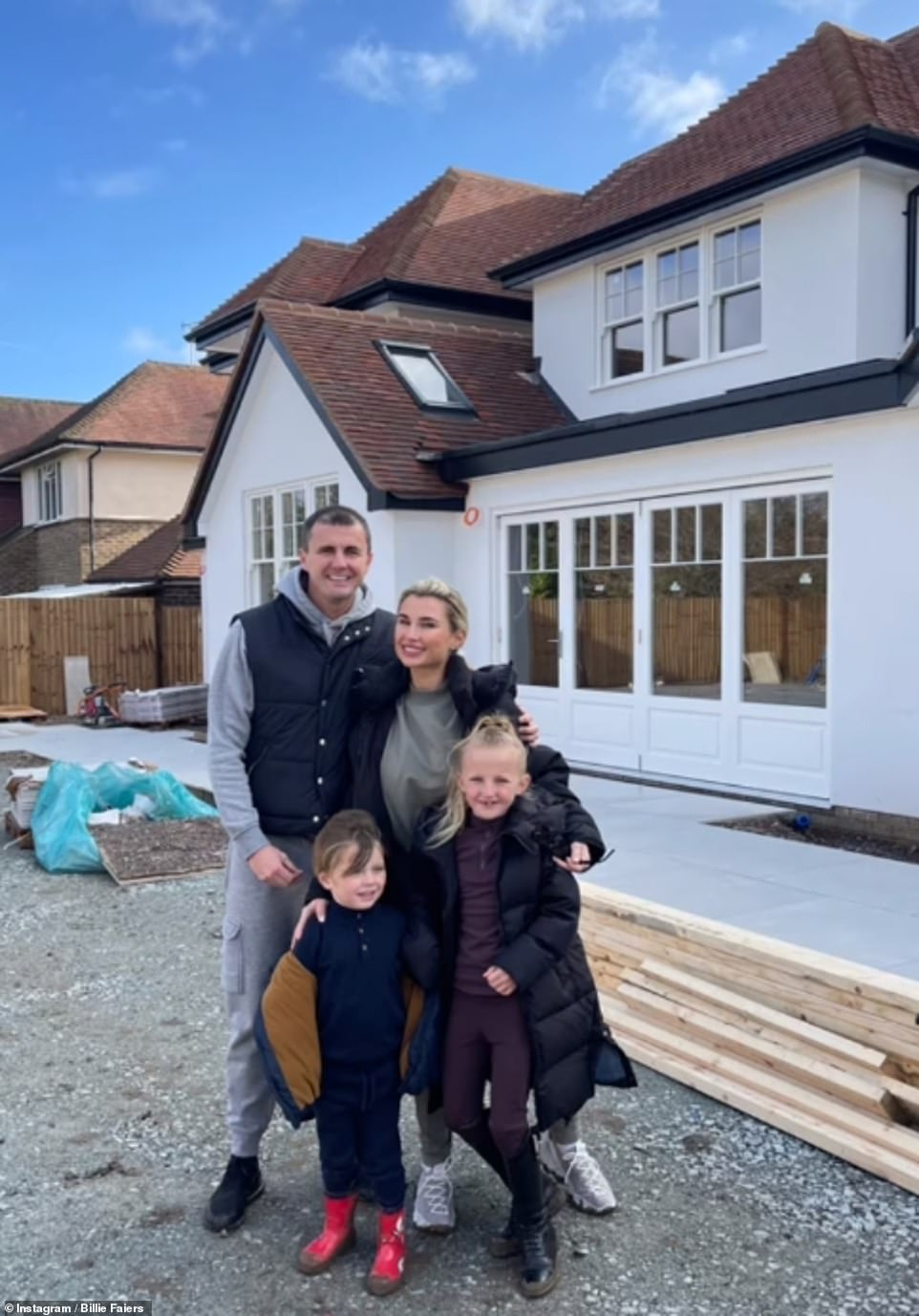 Family home: The group have been updating their fans as to the progress of their home

In scenes that aired during an episode of The Family Diaries, the couple were told that workmen couldn’t continue with the development until they ‘started to make decisions’ on the interior.

Paying a visit to the property, Billie and Greg were greeted by their project manager Lee, who revealed that the renovation team were unable to carry on with work on the house until they received guidance on Billie’s plans for the interior.

Greg explained: ‘There’s no one working because we haven’t been giving them decisions.

‘This is interior and he needs to be on top of it a bit more, and he’s waiting for information from you,’ before turning to Billie.’

Noting the remaining steps in the renovations, Lee told the couple: ‘It’s basically, kitchen, utility all that we’re going to do and stairs, and then we can get everything in place and call the plasters in.’

As Greg asked how far behind schedule they were with renovations on the home, Lee admitted they were currently 24 weeks late.

Greg admitted: ‘Lee told us before that it was behind but it’s shocked me for him to tell me it’s 24 weeks behind, it’s been dragged out long enough and it’s time. 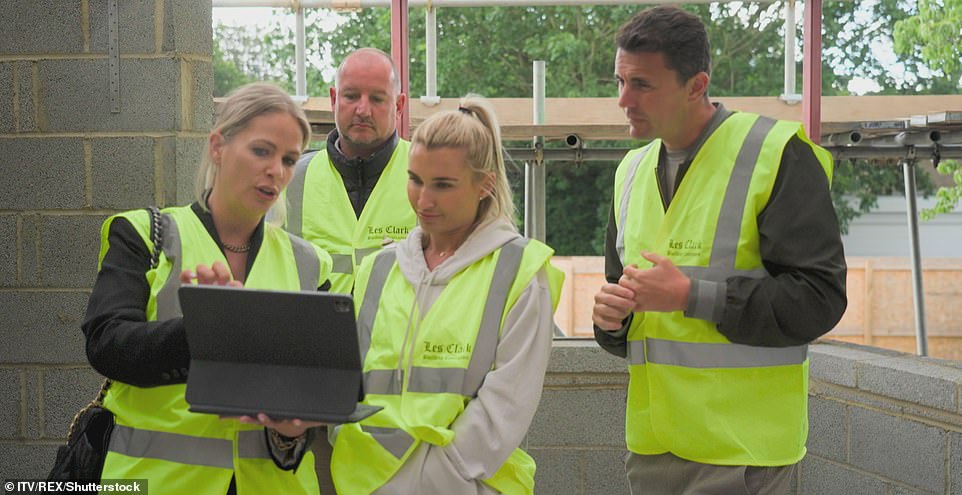 Building work: Billie admitted in March she wouldn’t have bought the abode if she knew the ‘headache’ it would be

‘At this rate I’ll have finished the garden before you finish the interior.’

It comes after reports that Billie and Greg – who share children, Nellie, seven and Arthur, four – were allegedly ‘at war’ with their neighbours over ongoing renovations at their mansion, which began in January 2021.

The couple were said to be ‘no longer on speaking terms’ with nearby residents – before they had even moved into the property – according to The Sun.

Their relationship with their neighbours was thought to be so bad, they even reportedly splashed an eye-watering £20k on trees to maintain their territory.

Laurel trees, which conveniently grow between 15 and 35 feet tall, cost £240 each and were bought in order to keep eavesdroppers away, according to reports.

A neighbour told the council: ‘I give my response to the amended drawings for the above property which, whilst I would have liked to have had similar window treatment to bedroom 4 as that of bedroom 2, I find to be acceptable in principle.’

They went on to claim that they would ‘give their support’ if the house would ‘fit the character of the area’, adding how it would be the biggest house on the street.

Last year, Billie admitted she’s not speaking to the neighbours, after they opposed the couple’s plans to demolish the original rundown house and replace it with a five-bed palace.

Bridges haven’t been built since they won planning permission in August 2020 with Billie saying: ‘We’ve not seen anyone. But it’s just not a great start, is it?’

‘There’s only one neighbour to the side of us and he had a lot of reasons as to why he didn’t want us to go ahead, but it was getting a bit silly in the end. It’s been a very long journey already and it’s about to get even more pressurised once the builders start work.’

According to the planning application, all five bedrooms will be on the first floor with the en-suite master bedroom having a huge dressing room. Three of the other en-suite bedrooms will have walk-in wardrobes.

Greg has been allowed to add a ‘man cave’, converting the original garage into a gym and games room, and there will be a play room for their two children.

They’re also adding a two-storey side extension, single extensions to the front and rear, and completely re-landscaping the outside space.

Billie admitted in March she wouldn’t have bought the abode if she knew the ‘headache’ it would be.

She said: ‘Now someone else has also said to us that we should probably think about knocking the house down and start all over again it’s just becoming one thing after another.

‘We’re nearly a year in now. It would have been nice to know that like six to eight months ago because if we are going to knock the house down it means we’re going to have to reapply for planning permission and start this process all over again.

‘I don’t regret buying the house but if I had known it would have taken this like, like over a year to get to find a builder, I probably wouldn’t have done it because I just was so unaware of how long things take.’

Meanwhile, Billie, who is a hoping for a Kardashian style home, revealed to MailOnline: ‘It’s stressful because we’re juggling, like time is not on our side at the moment. We we’re working all the time, we’ve got two young children.

‘With filming and obviously renovating a house, It’s like a it’s a lot and sometimes does feel like there’s not enough hours in the day’.

When asked what they wished they have done differently with the build Greg laughed ‘We probably wouldn’t have done it’.

‘It feels like it’s been forever’ the blonde beauty said, but is convinced that the whole family will ‘definitely’ be moved in in time to enjoy their outdoor pool this summer. 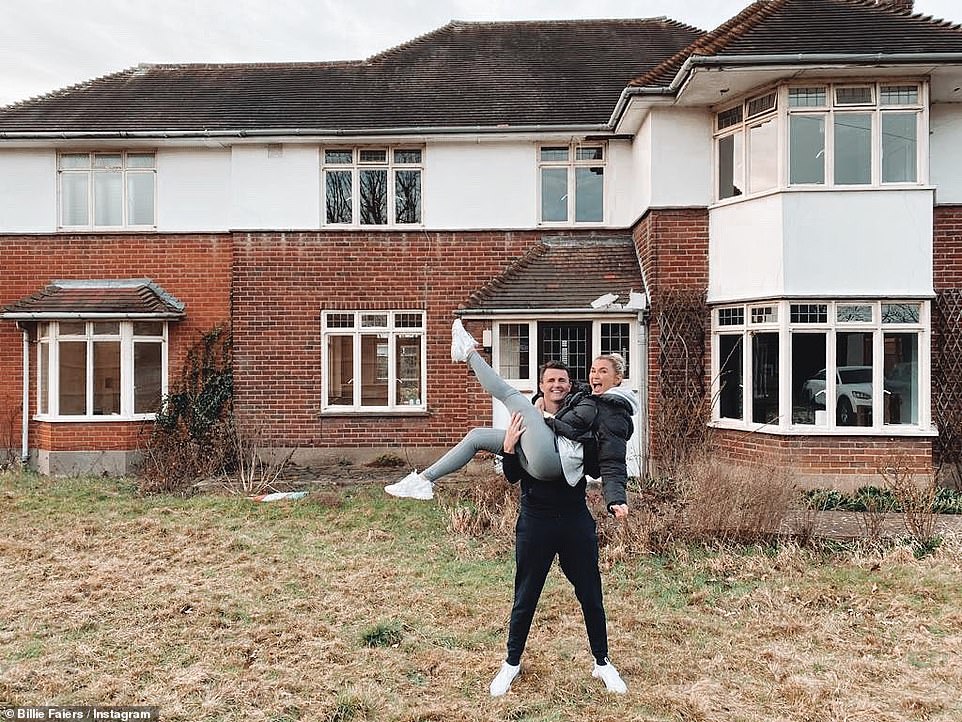 Grand plans: According to the planning application, all five bedrooms will be on the first floor with the en-suite master bedroom having a huge dressing room