Bentley this week unveiled its first 4×4, the £160,000 Bentayga which it says is ‘the most powerful, luxurious, and exclusive sports utility vehicle in the world’.

The ultimate Chelsea tractor will give added supercar cachet to school-run mums as well as drivers heading off-road up mountain terrain – complete with luxury picnic hamper.

Bentley’s first 4×4, above, is £160,000 and ‘the most powerful, luxurious, and exclusive sports utility vehicle’

Rolls-Royce has also taken the wraps off its stunning new £250,000, 155mph open-top Dawn convertible, which bosses say is ‘the sexiest Rolls-Royce ever’ and ‘the quietest convertible on the road’.

While both cars – fitted with the latest high-tech, luxury ‘must haves’ – will be launched at Frankfurt, order books are already open for deliveries from early next year.

But both are also heavy on fuel, emissions and the pocket. That said, their sales will help the British economy, as many will go for export.

Bentley hopes the Bentayga, costing the equivalent of two Range Rovers – will capitalise on the boom in luxury 4x4s among the world’s super-rich.

It accelerates from rest to 62mph in 4.1 seconds, with a top speed of 187mph. Average fuel consumption is just 22mpg and CO2 emissions are high at 292g/km.

Drivers can turn a dial to set up the car for different on or off-road terrains. 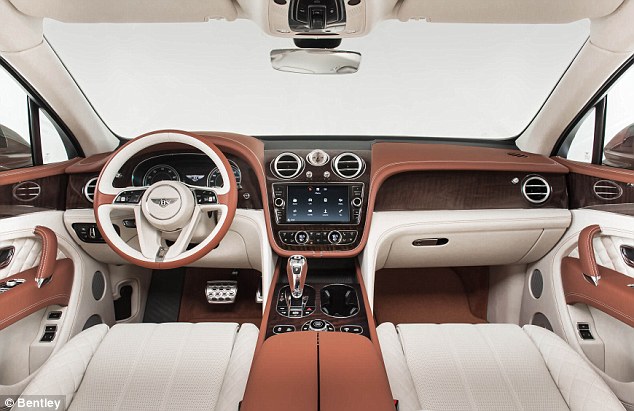 The interior of the Bentley Bentayga is handcrafted in metal, wood veneer and leather

Adaptive cruise control and traffic assist keep the vehicle at a set distance from the one in front. There’s also a hill-descent control system. The navigation system and cameras predict the road ahead and modify speed, while infrared night vision detects obstacles ahead in the dark. A panoramic glass roof with roller blind comes as standard.

The sumptuous interior cabin, is handcrafted in metal, wood veneer and leather. The inspiration is the success of rival luxury off-roaders such as the Range Rover and Germany’s Porsche Cayenne.

Ten manufacturers with factories in Britain joined Business Secretary Sajid Javid in Greenwich to fly the flag at an official ‘send-off’ of cars ahead of the Frankfurt show, the biggest and most influential in Europe.

Car bosses said investment in the UK automotive sector had already broken the £2 billion barrier for the first eight months of 2015 – with 4,500 new jobs announced in the same period. The industry now accounts for 11.8 per cent of total UK exports.

Vauxhall bosses say the new British-built Astra hatchback and estate will secure the Ellesmere Port plant in Cheshire for the next ten years.

Mr Javid confessed to car bosses in Greenwich that his 14-year-old son is becoming a huge motor nut, developing a near-encyclopaedic knowledge of vehicles, and has downloaded the entire back catalogue of BBC Top Gear. But there is one thing he’s become concerned about. ‘Last week he came to me and said: “Dad, I want to be just like Jeremy Clarkson.” ‘ 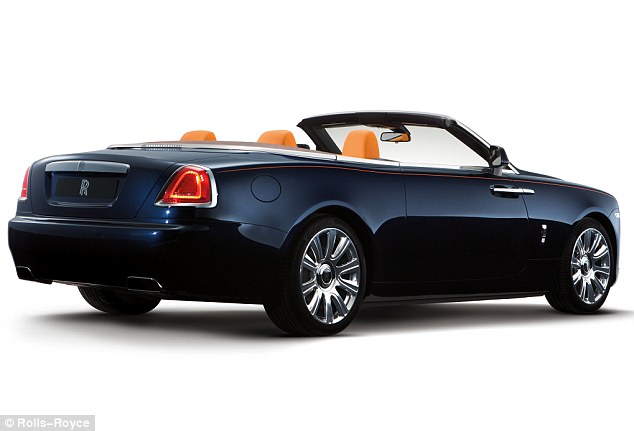 Rolls-Royce believes the new Dawn will attract a group of younger, more informal clients, noting how the car ‘looks superb with the hood up and stunning with it down’.

The car is inspired both by the firm’s Silver Dawn drophead coupe of 1952 – of which just 28 were built – and the life-enhancing spirit and allure of Anita Ekberg in the Federico Fellini classic film La Dolce Vita.

Six layers of fabric make it the quietest drophead convertible on the market and allow the roof to retract almost silently in 21 seconds.

The Dawn is powered by a massive 6.6 litre 563bhp twin-turbo V12 engine linked to an eight-speed automatic gearbox that propels it from rest to 62 mph in just 4.9 seconds, with its top speed restricted to 155 mph.

But it’s also a gas-guzzler, with average consumption at a hefty 19.9mpg. CO2 emissions are an equally high 330g/km.