As Bailey insists interest rates will not rise as far as feared… the Bank sends the pound tumbling, again

The pound slumped yesterday as the governor of the Bank of England poured cold water on interest rate expectations.

Sterling slid around 2 per cent towards $1.11 as Andrew Bailey said markets were wrong to believe rates would peak as high as 5.25 per cent next year.

His comments came as the Bank raised rates by a mammoth 0.75 percentage points to 3 per cent, the largest hike in more than 30 years. But in a warning to traders who were expecting more bumper hikes, Bailey suggested the unprecedented speed of rate hikes would soon begin to slow.

He said: ‘We can’t make promises about future interest rates, but based on where we stand today we think Bank Rate will have to go up by less than currently priced in financial markets.’

The Bank has been lifting rates since last December, from their record low of 0.1 per cent, in an attempt to cool redhot inflation. Higher rates should keep a lid on prices by encouraging saving rather than spending – but they also ramp up the cost of mortgages and other debts and put a brake on economic growth.

In the latest report from its ninestrong Monetary Policy Committee (MPC), the Bank said taking rates to 5.25 per cent would drag out the recession – which it thinks began in the third quarter of this year – for two years.

Unemployment, meanwhile, would almost double to 6.5 per cent. The Bank presented an alternative scenario, however, in which rates stayed at the current level of 3 per cent. It said this would be enough to bring inflation down from its 40- year high of 10.1 per cent towards its target of 2 per cent in the next two years.

Inflation would then fall below 1 per cent after three years. In more normal times, that could suggest the Bank was close to being done with interest rate rises, given its mandate to hit a 2 per cent inflation target.

The rebels who voted against the huge hike

More splits emerged at the Bank of England as two members of its ratesetting Monetary Policy Committee ( M P C ) opposed the hike to 3 per cent. Swati Dhingra argued that interest rates should be raised by 0.5 percentage points to 2.75 per cent and Silvana Tenreyro voted for an increase of just 0.25 percentage points to 2.5 per cent. They were outvoted by the other seven members, who opted for a 0.75 percentage point rise. The split exposed the difficulty the Bank is having in navigating Britain through the economic storm. Dhingra said that ‘a small rate increase was warranted to safeguard against creating a deeper and longer recession’ in Britain. Tenreyro, meanwhile, said the rate rises seen already would bring inflation back below 2 per cent in due course. 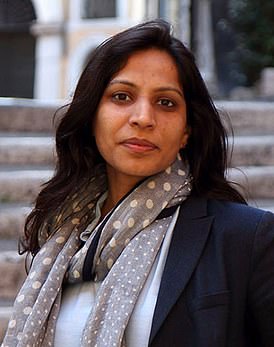 Kallum Pickering, an economist at Berenberg, said the Bank ‘may need to do much, much less than the market expects in terms of further rate hikes to return inflation to its 2 per cent target’.

Bailey’s decision to take on the markets sent the pound tumbling. This was just the latest example of the governor of the Bank butting heads with investors. In late 2021, when inflation was already beginning to mount, the Bank failed to hike rates as expected.

The lack of action led to accusations that Bailey had ‘bottled it’, as traders had interpreted his earlier comments as a sign that a rate hike was nailed on.

The pound slid by more than 2 per cent. Yesterday’s clash with traders again pulled down the value of sterling, which would usually rise on news of higher rates as traders shift to a currency promising greater returns. It is now at its lowest point since before Kwasi Kwarteng was sacked in midOctober following a disastrous six-week stint as Chancellor.

The pound has also been dragged down by the US Federal Reserve, which has been more aggressive than the Bank in its fight against inflation. The Fed has hiked rates by the unusually high amount of 0.75 percentage points at its last four meetings, taking its base rate to a range of 3.75 to 4 per cent and causing traders to flock to the dollar. While the Bank of England said its own base rate was unlikely to hit 5.25 per cent, it conceded it was also unlikely to remain at 3 per cent.

Bailey said: ‘Where the truth is between the two, we’re not giving guidance on that.’

Analysts said Threadneedle Street would be worrying about what other unpleasant surprises could be in store – especially regarding gas prices, which have been a key driver behind rising prices.

Philip Shaw, an economist at Investec, said rate-setters also had little idea what Chancellor Jeremy Hunt would announce in his Autumn Statement later this month, and whether there would be any further help for households which could fuel inflation.