Portugal has reacted with fury after apparently being left off a list of countries that will be able to form quarantine-free air bridges with the UK.

Tourism is the largest sector of the Atlantic nation’s economy and many areas including Lisbon, Porto and the Algarve are popular with UK holidaymakers.

But it is understood that the nation will not be on the initial list of ‘green’ nations allowed to couple-up with the UK under a traffic light system, as it is the only European nation with a higher rate of coronavirus infections than the UK.

It is expected to be be placed in the red zone of no quarantine-free travel, along with countries like the US and Brazil.

It came as ministers delayed unveiling a list of the first countries approved for air bridges. It was expected today but is now thought to be being released on Wednesday.

‘So there’s no reason, according to all the comparative criteria, for the existence of any application of quarantine rules on return to the United Kingdom.’

Tourism is the largest sector of the nation’s economy and many areas including the Algarve (pictured) are popular with UK holidaymakers. But they have so far been forced to stay away 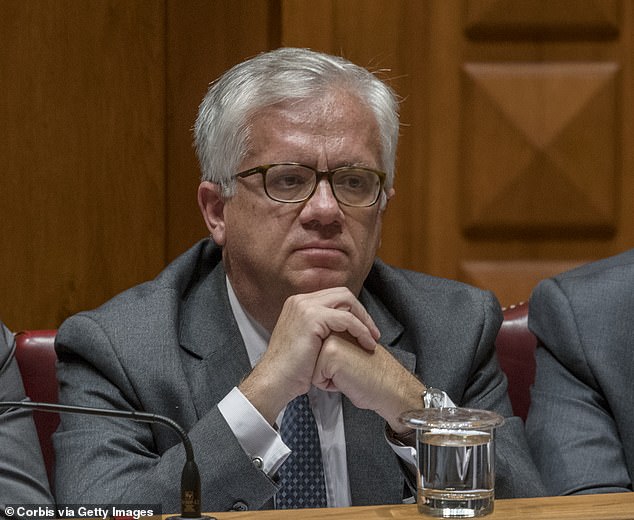 Eduardo Cabrita, the Portuguese home affairs minister, told the country’s Diário de Notícia newspaper: ‘There’s no reason, according to all the comparative criteria, for the existence of any application of quarantine rules on return to the United Kingdom’ 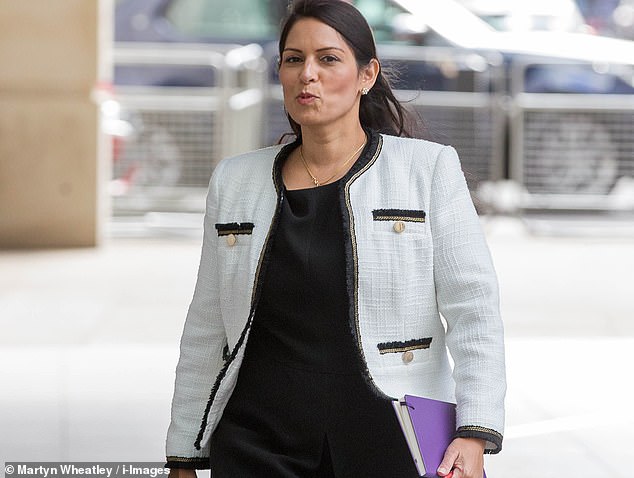 How will flights look different?

It came after Priti Patel dampened hopes of Britons desperate to jet off on holiday as soon as possible, warning that the air bridges will not be up and running ‘overnight’.

The Home Secretary spoke out yesterday after travel companies reported their biggest Saturday sales ever as bargain hunters rushed to book before a ‘traffic light system’ is introduced this week.

The plan to allow Brits go on holiday to the safest destinations without having to quarantine for 14 days is expected to come into force on July 6.

The Foreign Office will also lift its advice against ‘all but essential travel’ to low or medium-risk destinations, making it possible to obtain travel insurance.

But Speaking to Sky News’ Ridge on Sunday today, Ms Patel said that there may be some heavy negotiations ahead before some countries allow UK residents to travel.

She said: ‘There will be an announcement in the next few days ahead, the review point is tomorrow, which is what the Government has outlined.

‘You will have to, along with members of the public, listen to the advice, see what the government is saying in terms of the countries that we are going to be opening up with, who we are working with, the countries that my colleague the Transport Secretary (Grant Shapps) is in dialogue with right now.

‘But of course these measures won’t come in overnight, they will take time, because some of this will be down to negotiation, discussions with certain countries.’

The Scottish First Minister lashed out at the Westminster Government over plans due to be released within days to link the UK with countries with low coronavirus rates.

Speaking at her daily press conference (below) she said she and other devolved leaders had not been consulted over a plan which could lead to a surge in cases in Scotland if handled badly. 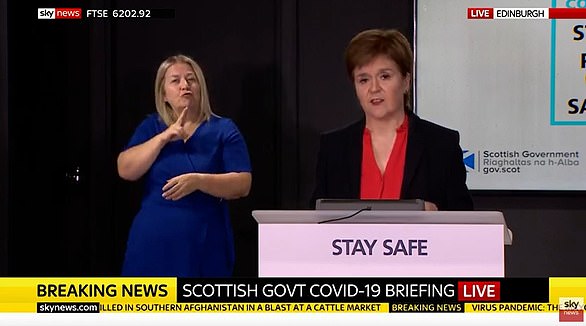 Scotland’s Justice Secretary Humza Yousaf had a conference call with Michael Gove and the other devolved administrations on the issue only this morning, she added.

The country this afternoon unveiled zero coronavirus deaths for the fourth day in a row to keep its death toll at 2,482, with just five new infections reported.

Ms Sturgeon told the briefing she was ‘still considering our response and our own proposals’.

However, with air transport, immigration and foreign policy all matters that are controlled by Westminster rather than the devolved administration, it is not clear what power she has to block the scheme.

‘This Is an issue we have tried very hard to work on with the UK Government and the other devolved administration and we do of course see the benefits of adopting a consistent approach across all parts of the UK,’ she said.

‘However we also know that quarantine measures, albeit on a more targeted basis in future, may become more important in Scotland than less as our infection rates fall, since then the relative impact of cases from outside Scotland potentially becomes greater.

‘The prospect of cases coming in from elsewhere poses a risk not just to health but also our economy.’

Scotland should consider making travellers from England self-isolate for 14 days as the country is on track to be ‘Covid-free’ by the end of September, top scientist suggests

Scotland should consider quarantining travellers from England if the coronavirus crisis continues, one leading scientist has suggested.

Professor Devi Sridhar – who advises First Minister Nicola Sturgeon – claimed that Scotland is on track to be ‘Covid-free’ by the end of September. Scotland yesterday recorded no new Covid-19 deaths, marking three days in a row and the eighth time this month of zero fatalities.

But the outbreak has yet to fizzle out in England, with thousands of people still thought to be getting struck down with the virus every day. And England is still recording an average of 110 each day, despite Boris Johnson announcing a major relaxation of lockdown from this Saturday.

But she told the BBC the major challenge would be to prevent any imported cases of the disease, if the virus is no longer spreading naturally.

Professor Sridhar – part of the Scottish government’s Covid-19 advisory panel – said it would be ‘really straightforward’ to contain if Scotland was an island. But admitted ministers must find the ‘next best solution’ and pointed to moves made in parts of the US to make travellers from badly-hit states self-isolate for two weeks. 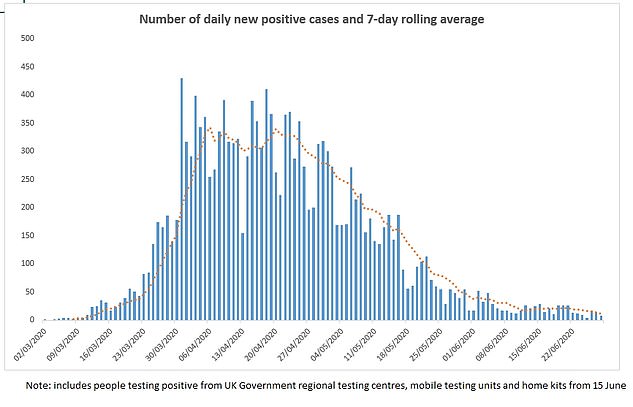 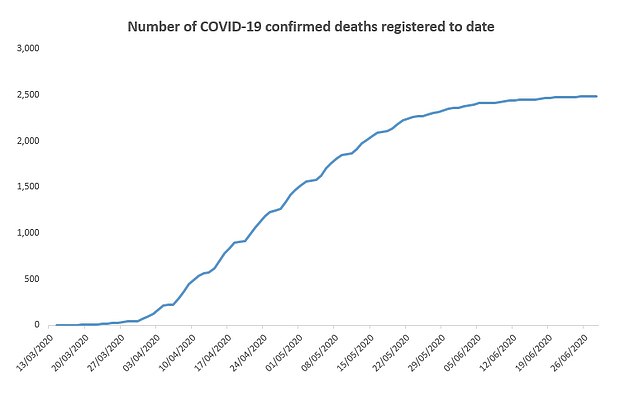 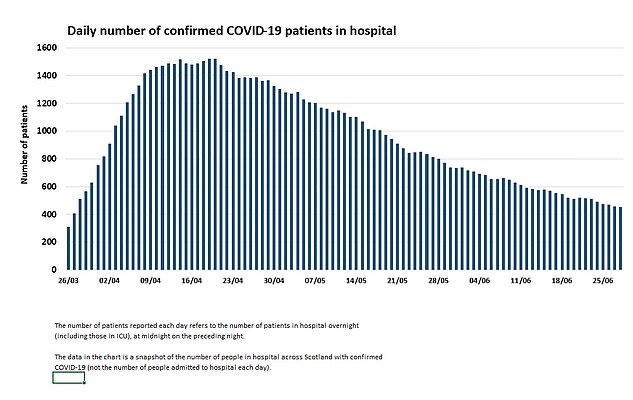 She pointed to New Zealand, which earlier this month declared victory over its Covid-19 outbreak after imposing one of the toughest lockdowns. 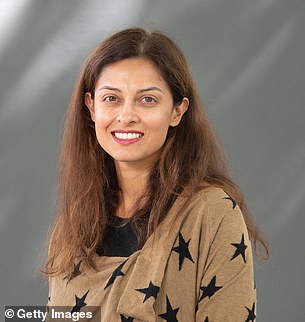 And she warned imported cases could set off ‘chains of infection’, which is exactly how the pandemic began after it spread from China.

She added: ‘I think Scotland is on track to eliminate coronavirus by the end of the summer by looking at the rate of the decrease [in new cases].

‘But we are going to see little bumps, so it’s a question of how small can you keep those bumps.’

Professor Sridhar — who warned that the ‘risky’ and ‘ethically questionable’ strategy in England appears to be to let the virus keep spreading — suggested catching those cases ‘through screening, through quarantine, through testing’.

She added: ‘The next best thing is to look across the world at Australia, Germany and even the US.’ 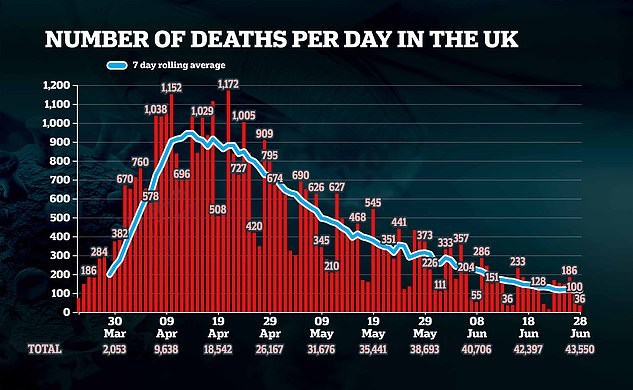 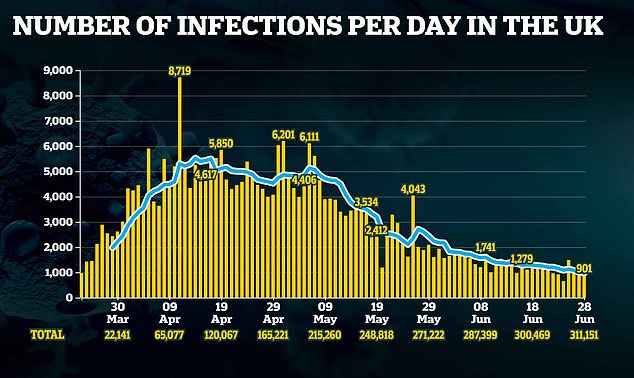 The move – designed to stop another Covid-19 wave – will affect Americans travelling from states such as Florida, Texas and Alabama.

Currently, any overseas traveller entering Scotland – which shares its only land border with England – must self-isolate for 14 days or face a fine of up to £500.

People must also provide the Government with details of who they are, where they’ve been and where they’re going, within 48 hours of arriving in the country.

The measures only apply to people entering the country from outside the UK, Ireland, Channel Islands or the Isle of Man.

One Scottish government source told The Times that ministers were considering adding England into the list of affected countries.

But they told the newspaper that the restrictions may only apply to parts of England at the centre of growing outbreaks.

Some scientists have branded the quarantine measures as ‘completely useless’ and have called for it to be scrapped as soon as possible.

Other experts argued the move – which came into force in June and prompted warnings that it could kill off air travel completely – came too late.

A Scottish Government spokesman told The Telegraph: ‘To allow us to move out of lockdown it is critical that we keep transmission of the virus as low as possible – and that includes transmission from high to low risk areas.

‘We are, in common with countries across the world, having to take unprecedented steps to deal with the challenges that the Covid-19 pandemic brings.’

It comes after Ms Sturgeon last week predicted that Scotland was ‘not far away’ from eliminating the coronavirus.

But she warned the virus – scientifically known as SARS-CoV-2 – has ‘not yet gone away’ despite the ‘exceptional progress’ made.

Official figures show 450 Covid-19 patients are currently in hospital north of the border, including five who are fighting for their lives in intensive care.

In developments south of the border, it was today revealed that Leicester may be forced to extend the lockdown for a fortnight from Saturday.

The city’s mayor said health chiefs have suggested they will ask him to postpone opening pubs, museums and playgrounds on July 4/

Sir Peter Soulsby, who was previously a Labour MP for Leicester South, said: ‘What they’re suggesting is not a return to lockdown.

‘It seems that what they’re suggesting is that we continue the present level of restriction for a further two weeks beyond July 4.

‘Now that’s obviously very different from the dramatic lockdown in Leicester that was being briefed at the weekend.’