Simpsons character Ned Flanders got his very own bridge in Portland, Oregon as of Monday 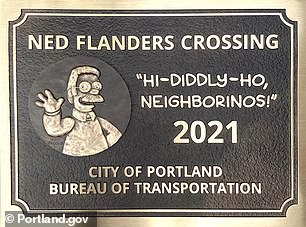 The bridge was originally named Flanders Crossing when it opened in June, but renamed to encourage Portlanders to be kind to one another, much like the character does

The Oregon city – which is plagued by homelessness and high crime – invoked Homer Simpson’s overly friendly neighbor Ned Flanders as the inspiration for a renamed bridge.

Portland Mayor Ted Wheeler said that Ned is the perfect example for the city’s promotion of kindness during Monday’s ceremony to add the bushy mustachioed, church-loving character’s first name to a pedestrian bridge called Flanders Crossing.

‘Ned Flanders has been a quintessential emblem of good neighborliness for over 30 years, keeping his cool and trying his best to be a good neighbor even when confronted with his rather difficult neighbors, the Simpsons,’ Wheeler said.

The city with the slogan Keeping Portland Weird could use some kindness. Portland has seen a surge in violent crime and homeless throughout 2021.

As of July, the city had over 750 shootings. In early August, Portland broke its record for most homicides in a year with 56 deaths. The last time the number had been that high was in 1994 with 55 deaths, according to US News and World Report.

Homelessness is also rampant, reaching a record high in the last five years with over 4,500 people on the streets.  A recent crackdown on some homeless camps throughout the city has sent even more people are roaming around the Rose City. 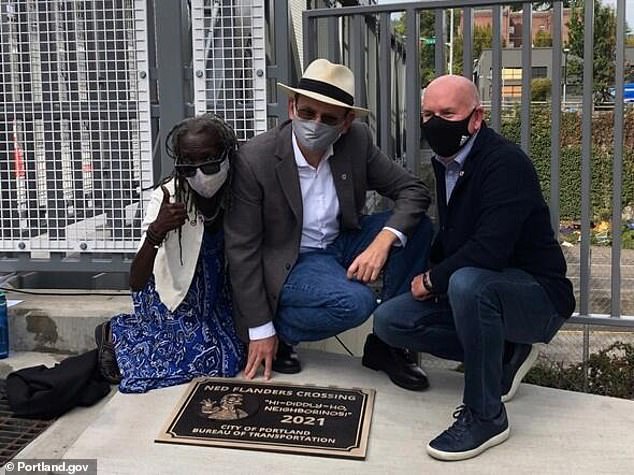 Despite the crime and homeless issues, Wheeler hopes the bridge attracts visitors and provides a deeper connection among the residents.

The structure bridges two neighborhoods to create a safe passageway for residents between the Pearl and Northwest districts for pedestrians and cyclists trying to cross the hazardous I-405 highway.

‘Flanders Crossing connects two neighborhoods together across a physical divide, the bridge serves as a symbol of bringing neighbors together across whatever divides them,’ the city wrote in its proclamation. 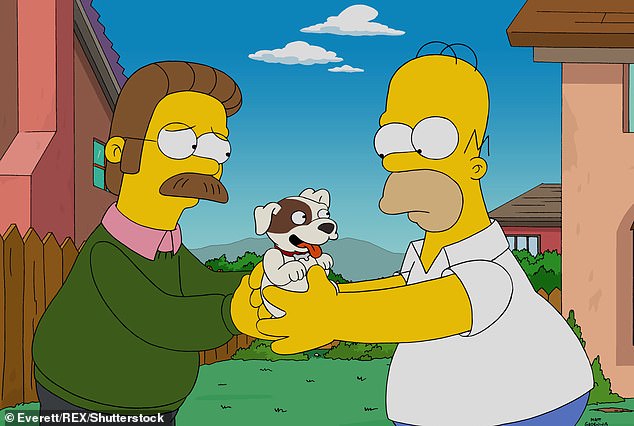 Ned is known for always being kind to his ‘neighborinos’ the Simpsons, even they are difficult 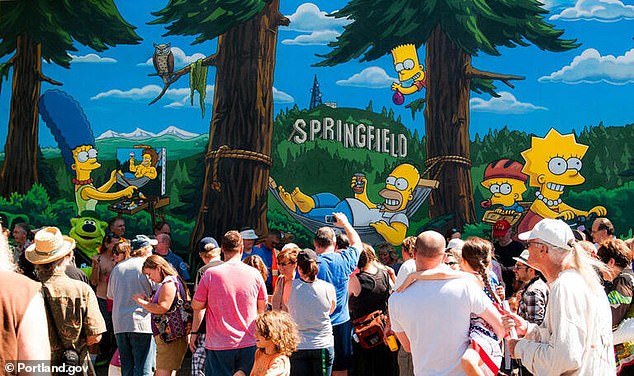 The divide in question happens to be I-405, which has posed a danger to pedestrians and cyclists for years.

The city reported that the crosswalks are located at the heart of the highway and do not ‘provide adequate pedestrian and bicycle facilities’ at rush hour.

The pedestrian bridge opened in June and cost the city $9.5 million. It is 24 feet wide and 200 feet long, and is a part of the neighborhood greenway project.

It was christened Flanders Crossing not after Ned, but after Portland resident and shipping tycoon George Flanders, who arrived in the city in the late 1840s, according to the Oregonian.

Simpsons creator Matt Groening grew up in Portland and has referenced different city street names throughout the program since it aired in December 1989, however the Ned Flanders Crossing is the first official Simpson’s-related location in the city.

Portland Transportation Commissioner Jo Ann Hardesty, and CEO of Travel Portland Jeff Miller, as well as the Mayor of Springfield, Oregon, Sean VanGordon, celebrated new name plaque as it was placed on the bridge.

VanGordon’s Springfield houses a 15-by-30-foot mural that pays tribute to the fictional town. It was designed by Groening and installed in 2014.

‘The Official Simpsons Mural in Downtown Springfield has brought our community years of laughter, thousands of family photos, and a host of visitors from across the globe. We hope the Ned Flanders Crossing brings a smile to the face of your wonderful neighbors and becomes a positive connection for our two cities,’ VanGordon said.

The streets of Portland are filled with Simpsons reference

Show creator Matt Groening grew up in Portland and has sprinkled in references to his hometown through his infamous show.

The show was recently renewed for two more seasons.

Here are the streets referenced in the show:

The Springfield Elementary school bully Kearney Zzyzwicz was named after this street.

Timothy Lovejoy, Jr. is the Reverend of First Church of Springfield in the show.

Mayor ‘Diamond’ Joe Quimby rules the town of Springfield in the show with his corrupt ways. He is a womanizer, too busy worrying about how to keep himself in office, taking bribes from Fat Tony.

The actual road is considered Portland’s most dangerous, fitting for the character Bob ‘Slideshow’ Terwilliger Jr. who tries to kill Bart Simpson in the show

Bart’s best friend Milhouse Van Houten is named after this avenue. Milhouse is known for his extreme nearsightedness and potato-shaped nose.