Pope Francis has said he is ‘saddened’ by Covid rule breakers who are ignoring travel restrictions during the pandemic and that they need to show a greater awareness of the suffering of others.

‘They didn’t think about those who were staying at home, of the economic problems of many people who have been hit hard by the lockdown, of the sick people. (They thought) only about going on holiday and having fun,’ he said.

‘This really saddened me,’ he added in a video address from the library of the Vatican’s Apostolic Palace.

The traditional Angelus blessing is normally given from a window overlooking St. Peter’s Square, but it was moved indoors to prevent any crowds gathering and limit the spread of COVID-19.

‘We don’t know what 2021 will reserve for us, but what all of us can do together is make a bit more of an effort to take care of each other.

‘There is the temptation to take care only of our own interests,’ he added.

Many countries have imposed strict restrictions to prevent the spread of coronavirus, which has killed some 1.83 million people worldwide, according to the latest Reuters tally.

Pope Francis appeared in public on Friday for the first time since skipping New Year’s masses at St Peter’s Basilica because of a bout of sciatica.

Standing behind a desk and next to a Christmas tree and a nativity scene, the pontiff led the traditional Angelus prayers in the Apostolic Palace.

‘I send you all my best wishes for peace and serenity in the new year,’ he said. 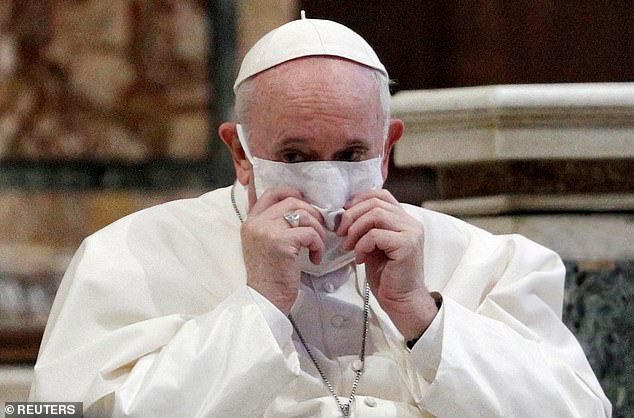 ‘The painful events which marked the life of humanity last year, in particular the pandemic, taught us how necessary it is to take an interest in the problems of others and share their concerns.’

The Vatican announced Thursday that Francis would be unable to celebrate New Year’s masses Thursday evening and Friday morning because he was suffering from sciatica, a chronic nerve condition causing hip pain for the 84-year-old.

During Italy’s first lockdown in March, Francis initially delivered his Sunday Angelus prayers from the Vatican library instead of his usual window overlooking crowds on Saint Peter’s Square.

The restriction prompted him to say he felt ‘caged’, and he made several brief appearances at the window, greeting the few people who ventured out into the vast square.

The pope has a risk factor for the coronavirus aside from his advanced age. When he was 21 years old in 1957, he suffered from severe pleurisy, requiring surgery to remove part of his right lung, according to biographer Austen Ivereigh.

The Vatican has not yet indicated when the pope may be vaccinated against Covid-19.