A polyamorous throuple who appeared in a 2020 episode of HGTV’s House Hunters is reflecting on how their very public coming out affected their lives.

In February of last year, Brian, 47, Lori, 42, and Angelica ‘Geli,’ 28, became the first throuple ever to be featured on HGTV when they appeared in the episode ‘Three’s Not a Crowd in Colorado Springs,’ wherein they search for their dream home in Colorado.

The throuple, who are raising two children together, now tell GQ that apart from the usual internet trolls, most people have been kind and accepting of their unconventional relationship — and mostly just want to ask them questions about their lifestyle.

Trio: A polyamorous throuple who appeared in a 2020 episode of HGTV’s House Hunters is reflecting on how their very public coming out affected their lives 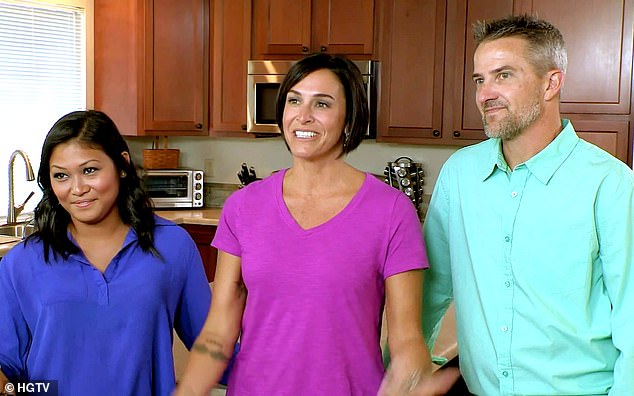 Three’s company: Brian, 47, Lori, 42, and Angelica ‘Geli,’ 28, were the first throuple featured on HGTV when they appeared in the episode ‘Three’s Not a Crowd in Colorado Springs

Brian and Lori, who is bisexual, married in 2002 and have always had a sexually experimental and open marriage. Every fall, they attend a Florida fair called Fantasy Fest.

Six years ago, they met Geli in Texas, and were soon exchanging numbers and inviting her over.

By 2009, they were making it official with a commitment ceremony in Aruba.

Brian and Lori have two children together — Jake, 12, and Isla, 14 — whom Geli now helps to raise.

And in July of 2019, the family of five made the move together from Texas to Colorado, where their search for a home ended up on House Hunters.

‘We wanted to put the normalcy of being in a non-monogamous relationship out there,’ Lori explained.

They certainly expect that it might go badly. Brian said that a company once rescinded a job offer when they learned about his relationship. 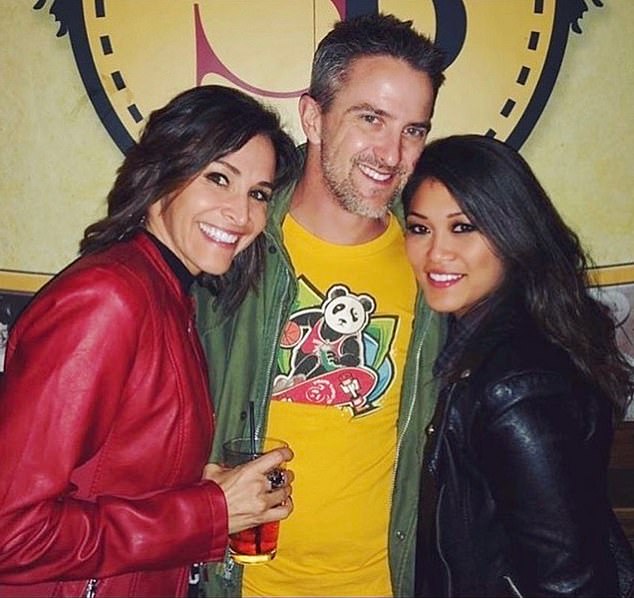 Luckily, though, it all seems to have gone OK. There have definitely been some negative comments on the internet, and Geli admitted the trolls got to her: ‘People were saying s*** that affects me.’

Their son also lost a friend because his parents saw the episode and weren’t pleased.

But for the most part, people have been accepting. Other parents at soccer games have introduced themselves and said they loved the episode, and one of Brian’s coworkers reached out to say that her brother was in a similar relationship.

‘You’re going to find out who your real friends are and who’s understanding and who’s not,’ Brian said.

The biggest change is that people who know about their unconventional lifestyle like to ask a lot of questions.

They want to know if there’s sex all the time (no), if they fight (rarely), who sleeps in the middle (Lori), if they can agree on TV shows (the women like murder shows, Brian does not), and if they experience jealousy.

Lori admitted to feeling jealousy more at first when she had to travel for work, but has made peace with it by focusing on the joy of seeing Brian in love. 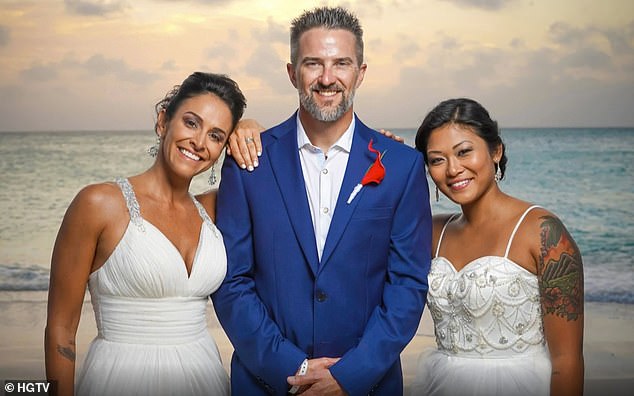 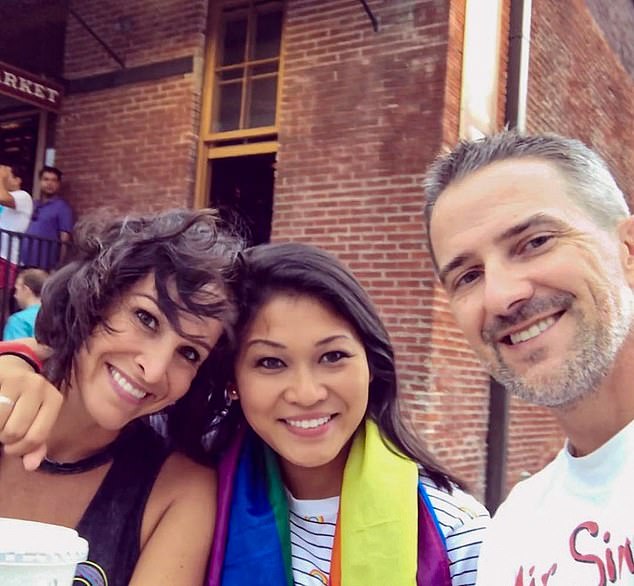 Not nice: In a new interview, they admit to seeing negative social media posts after the episode aired, and one kid wasn’t allowed to hang out with their son anymore

‘You are forced to figure out yourself and evolve and grow. Because you got two people calling you out on your s***,’ she said.

There are also lots of benefits, they said, like being able to divide responsibilities three ways instead of two.

As for their families, telling Brian’s family was the easiest, Lori’s Catholic parents took more time but came around, and Geli’s mom and dad had the most difficult time — though her dad did agree to walk her down the aisle.

Brian and Lori’s kids took it best. The throuple has been open to answering questions and letting the kids lead, and recently their daughter wrote a two-page letter about ‘how awesome her family is and how she loves having three parents.’

The trio had shared quite a few eye-opening details in their House Hunters episode, including about sexuality.

‘I understood from day one, even when we were dating, that Lori was bisexual and interested in women and men, and so we evolved to point where we were comfortable having another woman in our lives,’ Brain said.

Geli, a legal videographer, insisted she wasn’t looking to be a part of a throuple when she met Brian and Lori at a bar. 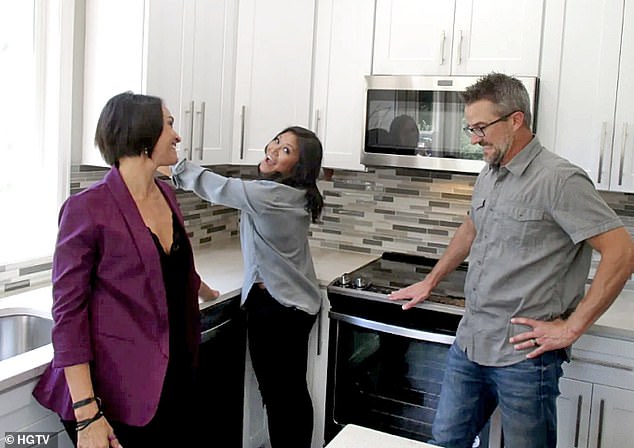 Reception: Mostly, though, other soccer parents introduced themselves and were nice, and one of Brian’s coworkers found common ground 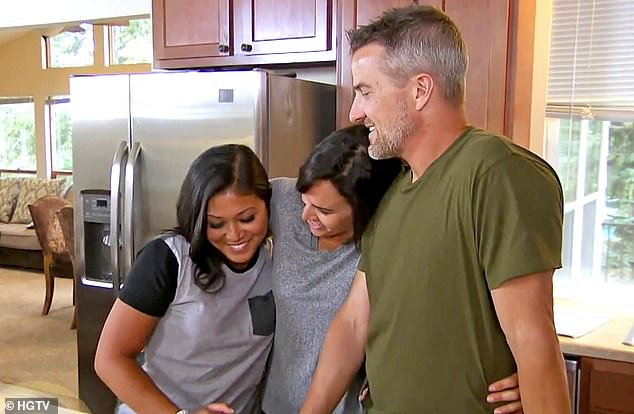 More to love: While Geli isn’t legally married to Lori and Brian, he stressed that they are committed to each other and ‘are all equals’ in their relationship

‘I didn’t plan on being in a relationship with a married couple, but it just happened very naturally,’ she said.

While Geli isn’t legally married to Lori and Brian, he stressed that they are committed to each other and ‘are all equals’ in their relationship.

The throuple decided to move to Colorado from Texas after Brian accepted a new job that would allow him to work remotely.

They left their children with their grandparents in Texas while they stayed in a vacation rental and searched for a new home to start the next chapters of their lives.

‘The past four years, I have been living in Lori and Brian’s house, so buying a house together as a throuple will signify our next big step as a family of five rather than all four of them plus me,’ Geli explained.

As House Hunters fans are well aware, it’s hard enough for two people to agree on a home they want to buy, let alone three. 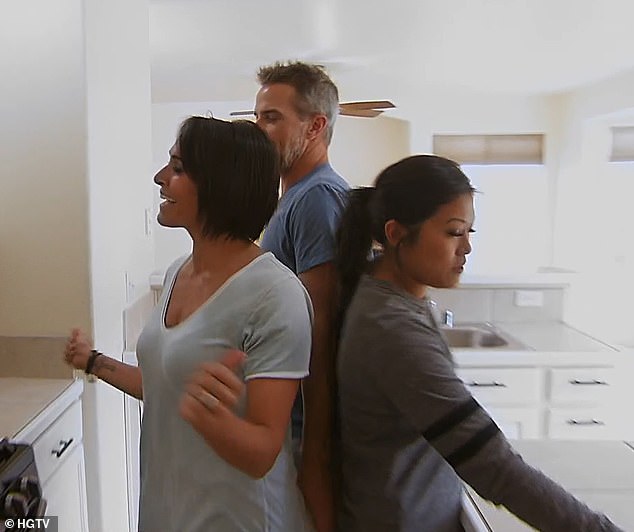 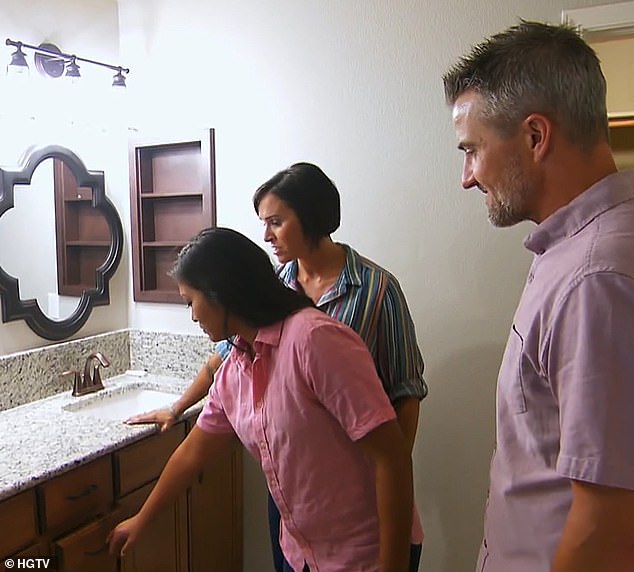 Amenities: They wanted to have enough space for their family, including a three-car garage, a large bedroom to fit all three of them, and a master bathroom with plenty of sink space 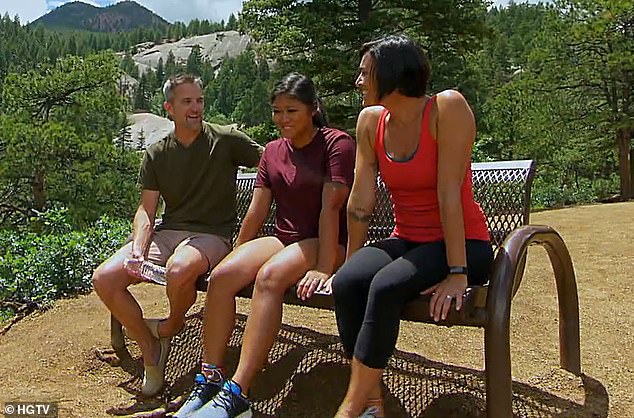 Equals: They all had different houses in mind, but because Brian and Lori had already purchased a home together before, they let Geli make the final decision

They wanted to have enough space for their family, including a three-car garage, a large bedroom to fit all three of them, and a master bathroom with plenty of sink space.

While Lori was hoping to take on some DIY projects, Geli wanted their home to be move-in ready.

Brian, who claimed to be the ‘practical’ one, was really just concerned with getting a home office with a view. 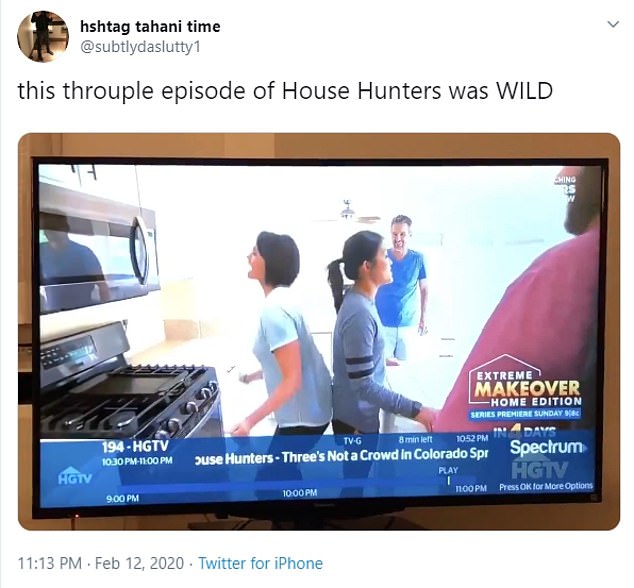 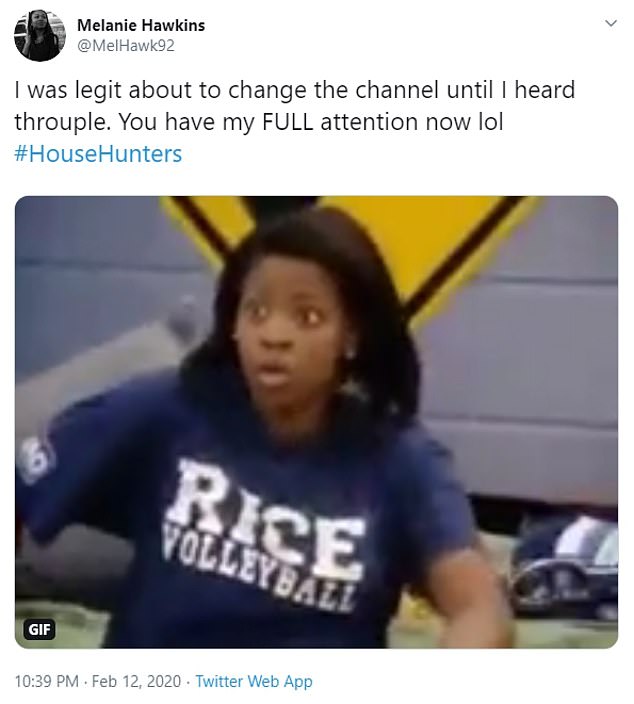 Loving it: Many Twitter users praised HGTV for the ‘progressive’ and ‘educational’ episode

They all had different houses in mind, but because Brian and Lori had already purchased a home together before, they let Geli make the final decision.

Many praised HGTV for featuring the throuple in the episode, which was called both ‘progressive’ and ‘educational.’

‘HGTV really might be the most progressive show on TV. About to watch a polyamory couple fight over a house!’ another commented. 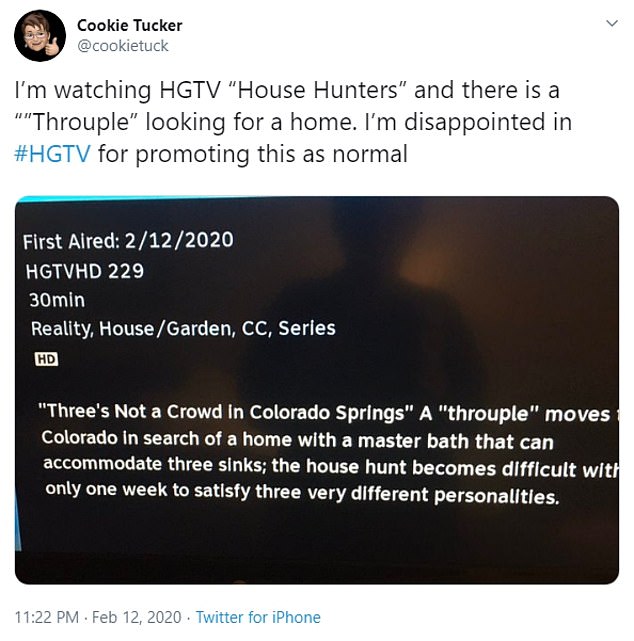 Unhappy: Critics insisted it was ‘not normal’ and slammed the network for the inclusive episode, while others felt it wasn’t progressive enough

Someone else admitted: ‘I was legit about to change the channel until I heard throuple. You have my FULL attention now lol #HouseHunters.’

Some, however, were less than pleased by the inclusive episode and slammed the network for featuring Brian, Lori, and Geli’s story.

‘I’m watching HGTV “House Hunters” and there is a “Throuple” looking for a home. I’m disappointed in #HGTV for promoting this as normal,’ one critic tweeted.

‘Wow @hgtv, I can’t believe you aired an episode of #HouseHunters with a “throuple”. I’ve been watching your channel and House Hunters every night for years and this made me change the channel. I’m disgusted you decided to air this and I won’t be watching HGTV again,’ wrote another shocked viewer.

HGTV spokesperson Chelsey Riemann shared a statement in support of the episode, telling USA Today: ‘We feature all homebuyers and living choices.’