Hardly any drivers feel safe on smart motorways, the result of a huge motorist poll has found today.

A survey of 17,171 drivers by the AA found that just 9 per cent feel relaxed or safe using the motorways without hard shoulders, either permanently or as part of temporary measures when there’s a lot of traffic.

The findings from the poll have been published on the day BBC Panorama will air its investigation into the dangers of smart motorways, which reveals that 38 people have been killed on them in the last five years.

It suggests the Government was misled about their safety credentials a decade ago before they were introduced across the country.

Unsafe: A poll of more than 17,000 motorists has revealed that 91% don’t feel safe or relaxed when driving on smart motorways

The huge survey of drivers was conducted between 14 and 21 January this year after the AA announced it had instructed its breakdown crews not to stop to help stranded motorists on them over safety issues.

The poll found that many motorists not only don’t trust them but are also unaware of how to use different types of smart motorway.

As well as fewer than one in 10 feeling safe and relaxed using them, just 12 per cent of drivers quizzed think smart motorways are as safe as traditional motorways and that more should be built.

One in four (42 per cent) said they think no more smart motorways should be introduced in the UK while a further 15 per cent think all existing smart routes should be scrapped with immediate effect.

The poll found that almost three in five (57 per cent) believe the public hasn’t been well-informed by Highways England about the different types of smart motorway and how to use them correctly.

Current smart motorways and which type they are

Smart motorways were introduced as part of efforts to ease congestion by allowing cars to drive on the hard shoulder at least some of the time, with traffic being monitored via cameras and ‘active’ speed signs determining the limit on the routes.

Six more are under construction and another 18 are being planned.

The survey also revealed that 8 per cent don’t understand the term ‘Emergency Refuge Area’ (ERA), which are the small laybys along ALR routes for motorists to use if they do break down.

When asked how far they’d be prepared to drive a car with a punctured front tyre on a quiet motorway with no hard shoulder in place, just 11 per cent said they’d be comfortable to travel for 1.5 miles – which is the minimum distance between ERAs on smart motorways currently in place today.

The remaining 3 per cent said they would be happy to drive for up to three quarters of a mile with a puncture.

What are the three types of smart motorways and how do they work? 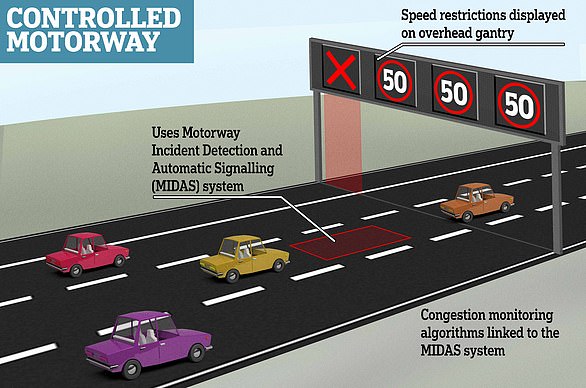 The AA has persistently argued that ERAs should be installed every three quarters of a mile as an absolute minimum when there is no hard shoulder, with the organisation’s president, Edmund King OBE, being a long-standing critic of the introduction of motorways without hard shoulders.

In a statement on Monday, he said: ‘Drivers don’t trust smart motorways and with 38 per cent of breakdowns occurring in live lanes that is not surprising.

‘There is much confusion and fear out there. If the Government is not going back to the drawing board to reinstate the hard shoulder, then the least they can do is to double the number of emergency refuge areas to every three-quarters of a mile.

‘The current system is not fit for purpose and too many tragic and avoidable deaths are occurring.’ 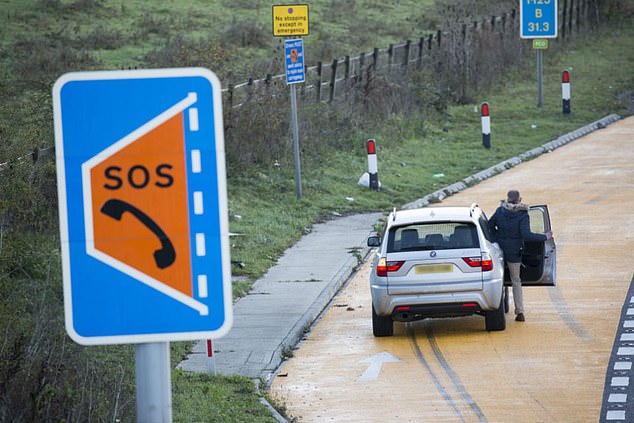 The AA has campaigned for years for Highways England to install more Emergency Refuge Areas like these on part of All Lane Running smart motorways. They only appear every 1.5 miles under initial measures put in place, which the motoring group says isn’t sufficient

He added: ‘It is no consolation to the grieving families when the Government repeats that these smart motorways are as safe as conventional motorways, when we know better design would result in fewer deaths.

‘Too many corners have been cut in the interest of cost saving to move the goal posts from ERAs every 500 metres in the successful M42 pilot to every 2500 meters without consultation.

‘The Panorama investigation clearly shows that the police, the AA and even the Transport Minister responsible for roads at the time, say the system is flawed and dangerous and must be changed. Coroners have repeated this message after needless deaths.

‘I drove many hundreds of miles on smart motorways in doing research for this programme and my dash cam picked up far too many unimaginable horrors some of which will feature in the programme.

‘Now is the time for radical change or more lives will be lost.’

The AA’s concerns for the safety of its staff has resulted in their patrols not attending breakdowns that have occurred on smart motorways and not in ERAs.

In these cases, the breakdown assistants must wait for Highways England – the government agency responsible for the nation’s motorways – to have the stricken vehicle towed to a ‘safe locations’, then AA employees can work on the cars away from the fast-moving traffic.

He claims the government was ‘misled’ over the safety of taking away the hard shoulder on stretches of motorway during a trial in 2010 before 200 miles of smart motorway were installed – and another 100 miles are still due to be converted. 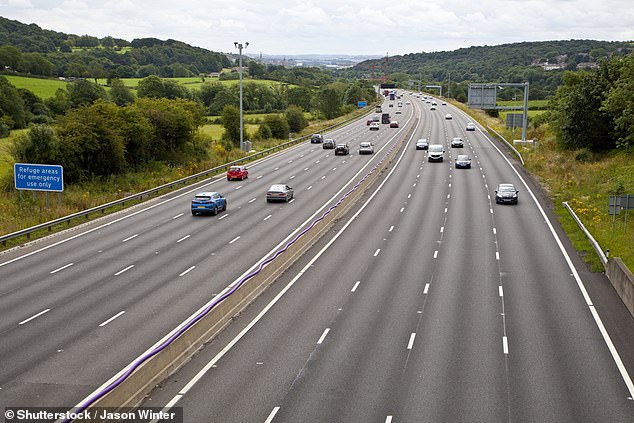 The dangers of these routes have been highlighted in recent months as a result of repeated deaths on smart section of motorway.

Four people were killed on a smart motorway on the M1 in just 10 months after being hit by traffic in a busy lane that used to be a hard shoulder.

On one section of the M25 near misses have increased 20-fold since the hard shoulder was taken away, the BBC exclusive will confirm tonight.

It was recently revealed that broken down motorists have to wait an average of 17 minutes to be spotted by cameras along the network of smart motorways.

It then takes a further 17 minutes before they are attended to be rescued.

The government is set to introduce new radar technology being used on two sections of the M25 currently that can spot stranded vehicles as soon as drivers break down.

It is understood this is to fitted across the whole smart motorway network.

There will also be more emergency laybys, the BBC reports.