National Highways has added a new ‘Big Brother’ van to its fleet that can detect if motorists are wearing a seatbelt or holding a phone at the wheel as they drive past – and police have been using it for weeks.

The vehicle is the first of its kind being trialled on UK roads, with Warwickshire Police deploying it on its motorways from 11 July and will use it for at least the next three months to catch motorists breaking the law.

The van will be used only at the roadside and is fitted with a large metal gantry structure with cameras attached to monitor the road from an elevated position.

The Government’s major roads department says the hi-tech van is first being used to ‘understand the scale of the problem around these dangerous motoring offences’, though suggest similar technology-packed vehicles could be distributed across the country to ‘boost road safety’.

On the hunt: The new van, which has been in use since 11 July, will help detect motoring offences such as holding a mobile phone at the wheel or not wearing a seatbelt

National Highways says drivers caught by the van breaking the law will be issued by Warwickshire Police with a warning letter to inform them of the dangers of their actions.

The letters will remind drivers that they could be fined up to £500 for not wearing a seat belt in addition to receiving penalty points, while those caught using a handheld device will be stung with £200 fines and six points on their licence.

Warwickshire Police confirmed to This is Money that repeat offenders will face prosecution for these serious offences, even with the van being used as a trial.

And other serious offences, such travelling with a small child in the front seat, will also see drivers punished, the force told us.

Earlier this year, stricter laws were introduced to almost completely outlaw any form of mobile phone use while driving, meaning anyone caught handling the phone – from touching the screen to scroll news feeds or pressing a button to take a photograph – will be penalised.

The only exceptions are for making calls to emergency services when there is no safe place to pull over and to use contactless payments like Apple Pay at a fast-food drive-through and to pay tolls, while hands-free calls are also still permitted.

Warning letters sent to drivers caught committing an offence by the roadside van will be asked to complete a short survey which will be used to inform National Highways’ research.

The testing period is said to be an ‘initial’ three months, though this could be extended, with the timescale used to assess the equipment’s performance across different types of roads.

The van should be easy to spot stationary at the roadside, given that it has a large metal structure that extends from the roof and contains cameras and equipment powering the surveillance systems.

This allows the technology to monitor road users from an elevated position to see what is going on inside vehicles, providing a viewpoint similar to cameras installed on motorway gantries and fixed speed cameras at the roadside. 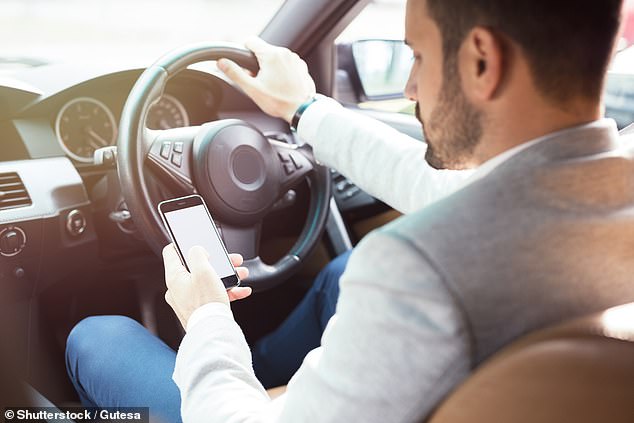 Stricter laws were introduced for mobile phone use at the wheel earlier this year. It means simply touching the device can land motorists with £200 fines and 6 points

Highways England describes it as a ‘sensor test vehicle’ that ‘can record footage of passing motorists’ – and it will only be operational when parked up rather than when the van is on the move.

Images captured by the cameras are processed using artificial intelligence (AI) to determine if motorists were using a handheld mobile phone and drivers and passengers were without a seatbelt.

The van is also capable of being kitted with additional technology to detect tailgating offences, although this system does not form part of the trials in Warwickshire, the authorities said.

RAC head of roads policy Nicholas Lyes welcomed the arrival of the surveillance van, saying the motoring organisation had been urging the Government ‘for several years’ to explore how camera-based technology could ‘reduce the scourge of drivers who put others at risk by using handheld phones while driving’.

Lyes says the vehicle will also be welcomed by the majority of motorists.

’79 per cent of drivers we surveyed support the introduction of this kind of technology, with a clear majority strongly in favour of this happening,’ he said

‘We’re extremely pleased to see National Highways and Warwickshire Police working together on this, and very much hope other police forces follow suit in a bid to make our roads safer.’ 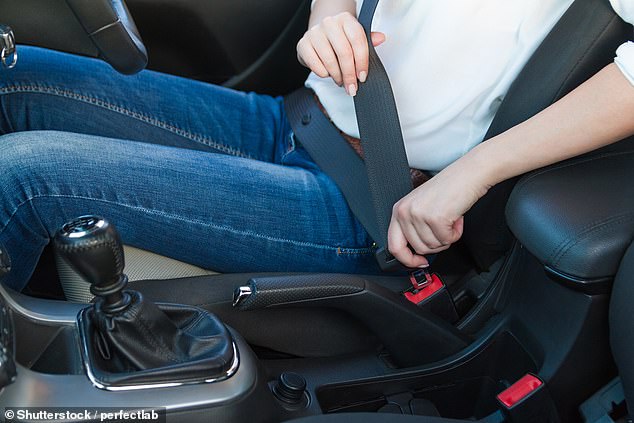 National Highways says the trial will form part of its commitment to improve road deaths, which includes a target to eliminate all deaths and serious injuries from motorways and busy A-roads by 2040.

Latest Government figures show that there were 420 collisions on British roads in 2019 in which the driver was using a mobile phone at the wheel. Separate figures show that failure to wear a seatbelt has been attributed to one in four road deaths.

National Highways head of road safety, Jeremy Phillips, said: ‘Safety remains our top priority and we want everyone to get to their destination safely.

‘Sadly, there are still drivers who do not feel the need to wear a seatbelt, become distracted by their phones or travel too close to the vehicle in front.

‘We want to see if we can change driver behaviour and therefore improve road safety for everyone.

‘Our advice is clear; please leave enough space, buckle up and give the road your full attention.’

Warwickshire Police inspector, Jem Mountford, added: ‘We are really excited to see the impact that this new technology has on the behaviour of drivers in Warwickshire.

‘Our officers deal with the tragic circumstances of collisions where often innocent people have been killed or seriously injured because a driver was distracted by a mobile phone or someone was not wearing a seatbelt.

‘These collisions are preventable but we need all road users to do the right thing and comply with the law to make our roads safer.

‘During the trial the most serious breaches may be prosecuted, with others receiving warning letters, giving us the opportunity to explain how they have been caught and asking them to change their behaviour. Next time they may not be so lucky.’

The van has become the latest in a raft of new equipment being used across Britain to catch drivers breaking the law.

This includes the installation a new fixed camera last year on the M4 in Berkshire that also detect if drivers are not wearing seatbelts or are holding mobile phones.

Highways England claims this camera has caught nearly 7,000 people failing to belt up and over 25,000 drivers handling their phones in the first six months.

The Government agency overseeing major roads has also trialled new tailgating cameras on a stretch of the M1 near Northampton that have captured 60,343 instances of vehicles driving too close in a one-year period between October 2020 and September last year.

Although the technology and research is funded by National Highways, it says enforcement of any motoring offences identified ‘remains a matter for individual police forces’. 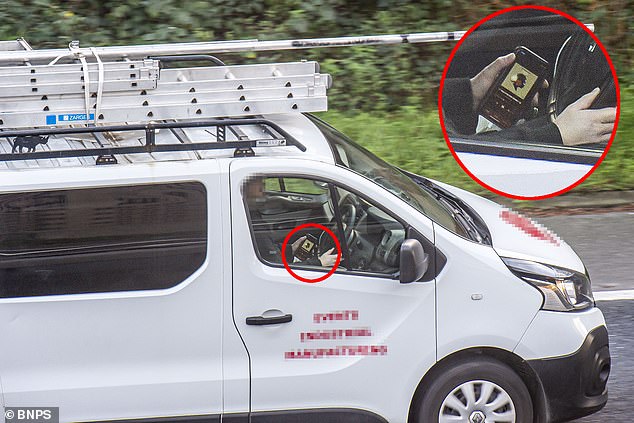 ‘Supercabs’ are being used by National Highways to monitor driving behaviour from a raised position, which has resulted in 250 drivers per month being caught for different offences

National Highways also operates three unmarked HGV cabs that are used by police to monitor driving on the strategic road network as part of ‘Operation Tramline’.

The ‘supercabs’ are not only relatively inconspicuous but also provide a raised viewing point for officers to see if a car driver is illegally using a device, not wearing a seatbelt or committing other dangerous driving offences.

The cabs, which have been used since February 2018, put officers at the same height as other HGV operators – and National Highways has previously released footage of lorry drivers using their phones.

Around 250 dangerous drivers a month are caught by the cabs, with handheld mobile phone use and not wearing seatbelts being some of the top offences identified by police, the government agency says.