Police have decided not to take any action against a mayor who was spotted going for a bike ride in his official chains during lockdown with three people outside his household.

Councillor Sabri Ozaydin was filmed in Enfield, north London, proudly wearing his official ceremonial chains with two other councillors and his driver during a cycle last Sunday afternoon.

Despite tweeting from his official social media page during the trip that the four men were ‘exercising’, Cll Ozaydin claimed they were taking part in official business on a Sunday. 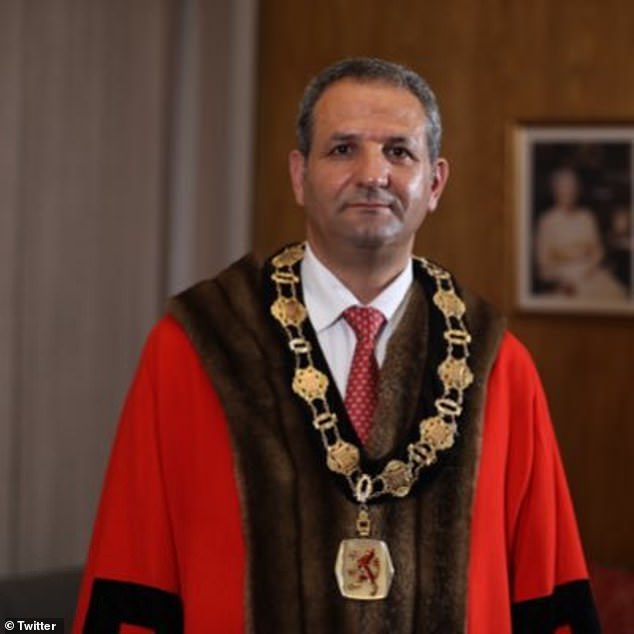 In a deleted tweet posted not long before he was videoed outside a coffee shop, Cllr Ozaydin wrote that they were ‘out cycling and speaking to local businesses after receiving issues concerning cycle lanes’.

Pictures posted on the official social media page showed the four men cycling around the borough and posing for photographs outside shops.

When confronted about the apparent lockdown breach around 15 minutes later by a member of the public, Cllr Ozaydin replied that they were ‘just cycling’, without adding any further explanation.

One of the men claimed in video footage of the exchange that the group were ‘checking the cycle lanes’ in the area.

Cllr Ozaydin then put on a surgical mask and another man, who has been identified on social media as the mayor’s driver and personal assistant added, ‘we’re actually attempting to find out what’s wrong with the cycle lanes to help local people’.

The mayor then replaced his earlier tweet with one saying the councillors were out exercising and left out the image of the four men standing outside a greengrocers. 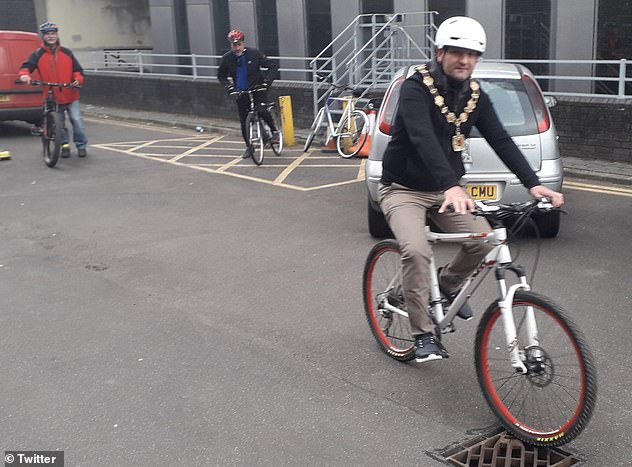 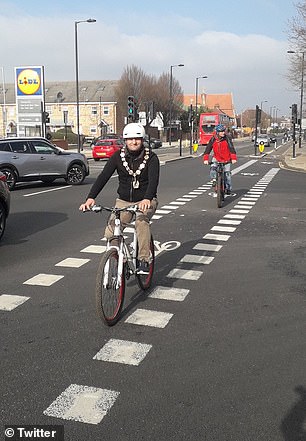 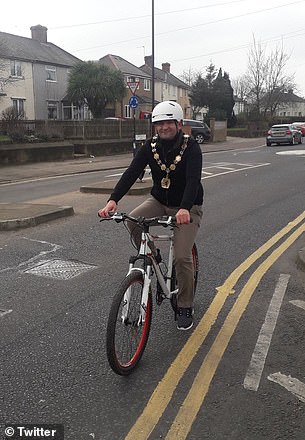 The next day Scotland Yard said officers were looking into the circumstances of the trip.

Now the Met has said police were told the journey was in the councillors’ official roles and decided to take no further action.

A spokesman for the force said: ‘Police were made aware of a social media video filmed in Enfield suggesting a breach of the Health Protection Regulations by the Mayor of Enfield and some local councillors.

‘Officers from the North Area Command Unit spoke to those concerned, who explained that they were conducting duties in line with their official roles.

‘The matter has been referred back to the local authority for any further review they wish to conduct. No further police action will be taken.’ 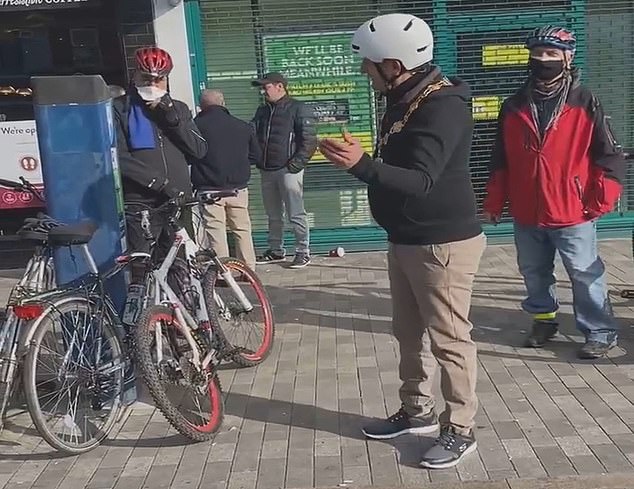 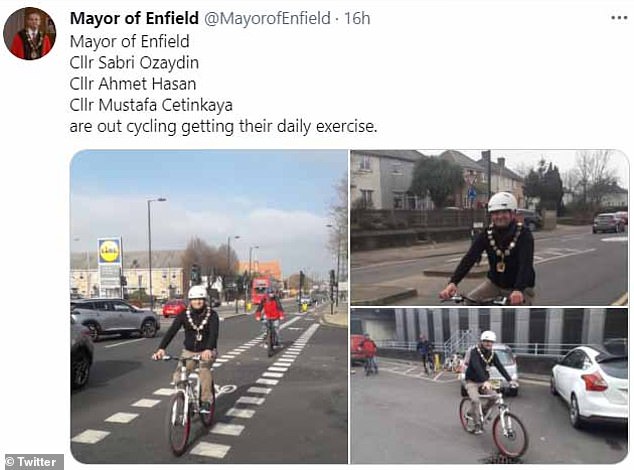 Government lockdown rules state that exercise is currently only allowed with one person from another household.

In January an independent candidate for London mayor was fined by the Met Police for breaking lockdown rules and canvasing in a public area.

Former Wall Street banker Brian Rose was filming promotional material for his campaign in Southwark, south London, on the Sunday of January 24.

You should minimise time spent outside your home, but you can leave your home to exercise. This should be limited to once per day, and you should not travel outside your local area.

You can exercise in a public outdoor place:

This includes but is not limited to running, cycling, walking, and swimming.

Personal training can continue if participants are from the same household or support bubble.

It can also continue if it is one-on-one, although this should only take place in a public outdoor place, and not in someone’s private home or garden.

Mr Rose said he and six of his staff were each fined £200 and told by officers that ‘campaigning was not a necessary reason’ for being out.

He described confusion over campaign rules as ‘an affront to democracy’.

The mayor of Enfield told a council meeting on Tuesday that his bike ride was ‘not a social occasion’ after he was also accused of breaking lockdown rules.

Cllr Ozaydin, who said he was speaking in a personal capacity, told the meeting the journey was made ‘to speak to a local business’ and had been ‘misinterpreted’ by councillors and residents.

Speaking during the full Enfield Council meeting, he also blamed his driver and personal assistant for tweeting that the event was ‘exercise’ rather than official business.

In the video clip posted to social media on Monday, a passer-by could be heard asking what the mayor is doing ‘out with a group of people’, with Cllr Ozaydin replying: ‘We are just cycling.’

The passer-by added: ‘You are not allowed to, we are in a lockdown’. The mayor later claimed the group was ‘testing the roads’.

‘But what you are doing is breaking the law’, the resident then added.

‘A group of individuals all meeting up outside a coffee shop, going for a bike ride. It’s not on. You should be leading the way, not breaking the law.’

One of the other cyclists then claimed: ‘We are actually attempting to find out what is wrong with the cycle lanes.’

The passer-by replied: ‘In lockdown? Do you all live together? You’ve all come from separate households.’

The man who witnessed the trip said: ‘It’s ridiculous, we have all abided by the rules. I couldn’t believe what I was seeing, he was wearing his mayoral chains.

‘He’s not meant to be working unless it’s essential. It was a Sunday as well, does he work on a Sunday? It’s one rule for them and one rule for everyone else.

‘If the police saw me on a bike ride with people outside my household I would get fined.’

Those commenting underneath the mayor’s tweet last week were not impressed. 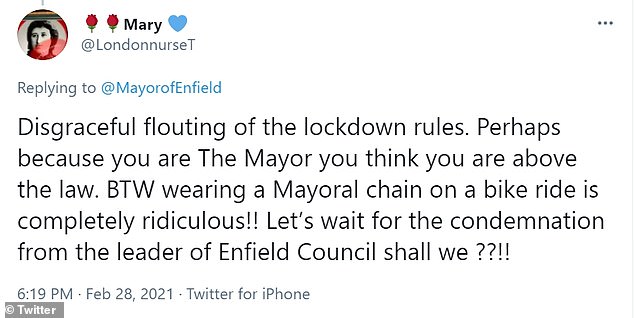 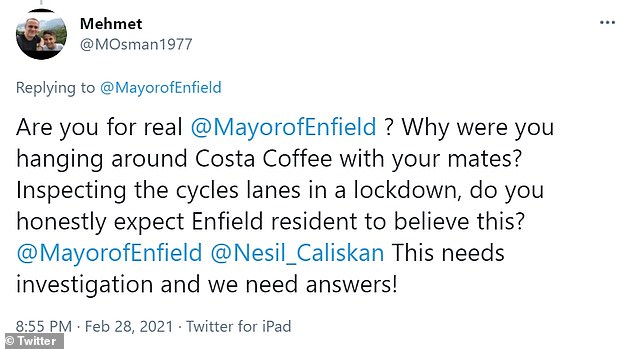 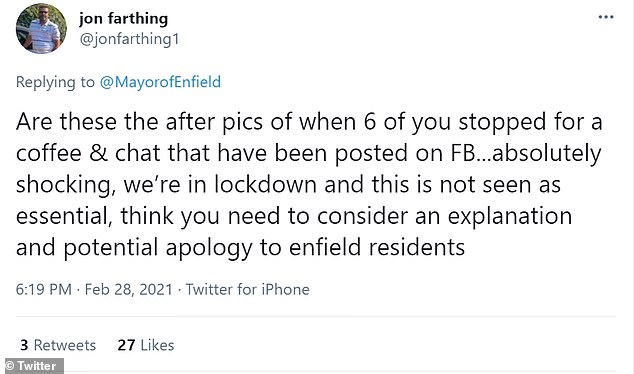 Social media users did not agree the cycle ride was necessary. One said: ‘The law is clear, at present you may cycle with one person not from your own household, here we see you with at least three people, unless you live with two of them you have broken the law, checking cycle lanes is not mitigation’

One said: ‘The law is clear, at present you may cycle with one person not from your own household, here we see you with at least three people, unless you live with two of them you have broken the law, checking cycle lanes is not mitigation.’

Nicola Hume, who said she was the daughter of Cllr Ozaydin’s assistant, wrote: ‘The assumption was that he’s just out with friends when he isn’t. He’s with colleagues.

‘The guy filming has jumped the gun. He’s wearing his mayoral livery collar which shows he’s working. They took some social media pics of him doing some exercise and stopped outside a Costa…’

But others did not accept this explanation. One wrote: ‘It was The official mayor Twitter page that said they’re just “getting their daily exercise”. Not sure why you need a whole group of councillors to “test the roads”.’ 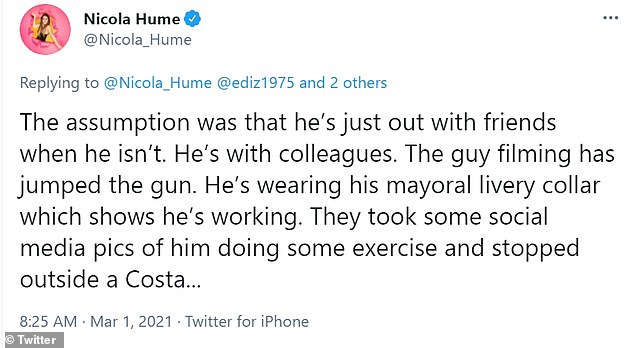 Nicola Hume, who said she was the daughter of Cllr Ozaydin’s assistant, wrote: ‘The assumption was that he’s just out with friends when he isn’t’

Another added: ‘Are these the after pics of when 6 of you stopped for a coffee & chat that have been posted on FB…absolutely shocking, we’re in lockdown and this is not seen as essential, think you need to consider an explanation and potential apology to enfield residents.’

One wrote: ‘Disgraceful flouting of the lockdown rules. Perhaps because you are The Mayor you think you are above the law. BTW wearing a Mayoral chain on a bike ride is completely ridiculous!! Let’s wait for the condemnation from the leader of Enfield Council shall we ??!!’

Another said: ‘What did one say. We are checking the cycle lanes. You’d think they would come up with a better excuse. And wearing his chains. Beyond belief.’