Police are to be handed powers to perform spot checks at the homes of overseas arrivals to check they are not breaking new 14-day quarantine rules.

Ministers will today press ahead with the mandatory isolation plan for all ports and airports – despite warnings it will wreck families’ hopes of a summer getaway.

MPs will be asked to usher through laws to bolster the police’s ability to enforce the strict measures.

Beefed-up powers will allow constables to impose £1,000 fines on those who breach the order, with magistrates able to slap offenders with potentially unlimited fines if the penalties are not paid.

Officers will also be carrying out random home visits on international arrivals, who will be required to supply an address where they will be isolating when they cross the border. 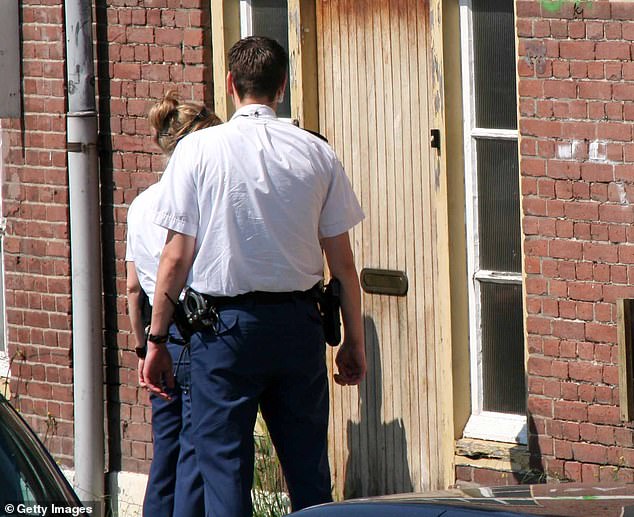 Around 100 of these spot checks will be performed each day, according to the Telegraph, which also reported rumblings of rebellion among Tory backbenchers.

Former Conservative leader Sir Iain Duncan Smith said: ‘The Government needs to rethink this quickly and not go into quarantine.’

Under the plans which come into force in early June, travellers arriving at all ports and airports will be ordered to go into self-isolation for a fortnight.

Foreign nationals who refuse to agree to self-isolate will be banned from entering the UK.

It will also apply to those returning from holiday abroad, but truck drivers will be exempt from the rules to prevent disruption to vital supplies such as food.

The ‘blanket’ policy has been agreed despite a plea by Transport Secretary Grant Shapps to establish ‘air bridges’ to holiday hotspots in Europe.

Heathrow has started trials of temperature screening to spot passengers with coronavirus.

Travellers passing through Terminal 2’s immigration hall are being monitored with thermal detection cameras which can read a person’s temperature in seconds from a distance of 8ft.

The airport is in talks with Border Force and Public Health England (PHE) over what action can be taken if a passenger with a fever is identified.

The traveller could be asked to quarantine or be prevented from boarding the plane.

The trials have been set up to ensure the technology works before proper regulations are introduced.

The move follows anger over the country’s failure to screen the 15,000 passengers continuing to arrive into Britain every day.

Heathrow says the measures could form part of an internationally agreed system of biosecurity to restore confidence in air travel.

Transit passengers, who do not formally enter the UK, will also be exempt, as will fruit and vegetable pickers.

Harvesters will be forced to live on the farms on which they are working.

But pleas for a broad exemption for business have been rejected.

Only a small number of specialist workers will be exempt from what insiders said would initially be a ‘blanket’ policy.

The quarantine plan is designed to stop the UK importing new cases of the virus. It will be reviewed every three weeks.

But Whitehall sources played down hopes it could be lifted before the summer holiday season.

It comes despite Mr Shapps on Monday raising the idea of ‘air bridges’ with popular tourist destinations such as Spain.

Madrid yesterday signalled it might be prepared to welcome UK tourists from July without asking them to self-isolate for 14 days.

But last night’s announcement of a blanket UK quarantine seems to rule out an ‘air bridge’ deal with Spain.

Rory Boland, editor of Which? Travel, said: ‘What we’ve had is incredibly confusing messages from the Government.

‘We have a possible air bridge announced one day, only for someone else to pop up later to say it won’t happen.’

Heathrow chief executive John Holland-Kaye said: ‘We need to find a way that the vast, vast, vast majority of people who don’t have a disease can still fly.’

It came as Italy yesterday announced airports will reopen from June 3. EU tourists will be allowed in from that date, with the 14-day quarantine waived.

But this would only include Britons if the UK also dropped its quarantine plans for arrivals from Italy.

A Department for Transport spokesman said yesterday: ‘Ultimately, we will be guided by the science, with the health of the public always coming first.’