Two paramedics have been stabbed in the chest today after a call-out to a home in the West Midlands where the alleged knifeman was seen carrying two blades before being Tasered by police.

The ambulance crew were called to reports of concern for a man’s safety in the Ashmore area of Wolverhampton at around 12.15pm this afternoon.

Neighbours said around a dozen emergency vehicles were at the scene and the suspect was Tasered with an electric stun gun by police after a male paramedic staggered out of the house yelling: ‘Help, help, we’ve both been stabbed’ while dragging his female colleague to safety.

Both paramedics were stabbed in the chest by the knifeman who pounced as they entered the property, police later revealed.

Anita Millard, 65, who lives next door, said a man lived alone at the property, and it had been his elderly mother who had first raised concerns for his welfare after he failed to answer the door.

She described how two paramedics arrived, along with two police officers, before they managed to gain entry by removing a door panel with a screwdriver borrowed from a neighbour.

She said: ‘The police asked the man’s mother to step back and then the girl paramedic went in, followed by the other medic. Then all I heard was a blood-curdling scream. He had two knives – I’ve never seen anything like it’. 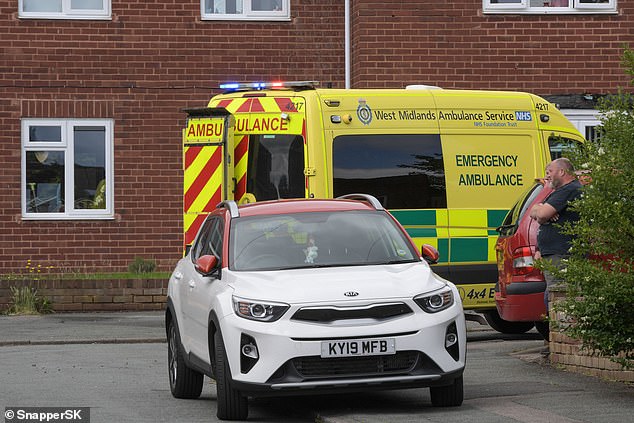 Mrs Millard, who has lived in the close for five years, added: ‘The male paramedic then came backwards out the house and he shouted into his radio ‘help, help, we’ve both been stabbed’.

‘Then he pushed the female paramedic backwards towards the side gate, and away from it all.

‘The guy was stood in the porch holding these knives.

‘Then the police came in and shouted ‘Taser’ and then they tasered him.

Colleagues of the paramedics have also spoken of the ‘harrowing’ scene that greeted them as pictures emerged of a blonde female paramedic being stretchered away.

Assistant Chief Ambulance Officer Nathan Hudson said: ‘We had a call at about midday from a woman concerned for a member of their family.

‘We arrived at the scene within five minutes. Together with police we had to gain access to the property.

‘As they were entering two staff members were stabbed in the chest with a knife.

‘Police officers were soon able to detain the individual.

‘The two paramedics, a female and male, are stable in hospital and their injuries are not life-threatening.

‘Nobody comes to work to be stabbed. Only yesterday we were celebrating 52 years of the NHS. It is quite shocking really.

‘They were conscious throughout and speaking when I went to see them in hospital.

‘Health care workers put themselves on the line every day, but this is not what you expect when you get up for work in the morning.

‘There can be nothing worse than going to help people you know who’ve been seriously hurt. Throughout, they acted impeccably.

‘I want to say a big thank you to everyone who attended the scene, in what was a very traumatic incident for everyone concerned.’

Speaking at a press conference at the scene, Superintendent Simon Inglis added: ‘We received a call at about 12 o’clock today from a concerned mother about her son that he was going to harm himself.

‘Ambulance crews attended with ourselves.

‘Medics entered into the property and unfortunately the man came out and attacked them with a knife.

‘Officers then engaged. He was tasered, detained and is currently in custody.

‘No other persons were injured and there was no wider threat to the community.’

Another resident, who did not want to be named, added: ‘The ambulance came first and we thought nothing of it.

‘The paramedics were seen trying to get into the property and were confronted by a man with a knife.

‘They used the emergency code and all of sudden police, ambulances, two rapid response vehicles turned up.

‘Over the next 10 to 15 mins two air ambulances landed on the shopping parade and teams rushed round to Stephens Close. 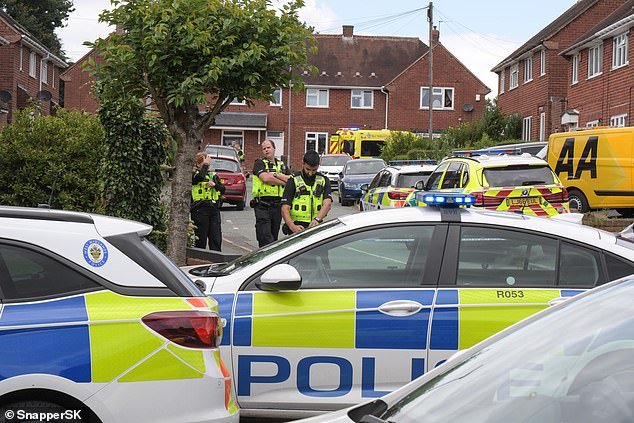 ‘I saw a male paramedic rushed out the property and into an ambulance.

‘Five minutes later a female paramedic was wheeled into another ambulance.

‘I know of the guy in the house but don’t know him personally. He rides his bike to and from work.

‘He doesn’t normally acknowledge anyone else in the street passing him. It’s normally a very quiet street and area.’

A spokesman for West Midlands Police had earlier said: ‘A man has been arrested after two paramedics were stabbed at a property in Stephens Close, Wolverhampton today.’

A spokesman for West Midlands Ambulance Service said: ‘Two members of ambulance service staff have been stabbed after attending a call out to check on the welfare of a man in Wolverhampton.

‘The initial call came through at around 12.15pm this lunchtime to an address in Stephens Close.

‘Shortly after arrival, the crew used their emergency alert to say that they had been stabbed.

‘The two members of staff, both paramedics, have been treated at the scene by doctors and paramedics and have been taken to hospital for further treatment.

‘A man who was Tasered by police officers at the scene has also been treated by ambulance staff.

‘More details will be released later.’