A Pride of Britain Award winner who risked her life to stop an out-of-control driver crashing into runners taking part in a race has told how she would do the same again.

PC Claire Bond, 47, who is This Morning’s Emergency Services Pride of Britain Award winner, responded to reports of an out of control driver in Staffordshire in September 2018.

Concerned the driver was planning to crash into runners taking part in a 10k race, PC Bond risked her life to stop him. But as she attempted to take his keys, she was crushed against the fence by the car and dragged along the road.

‘People ask me if you could go back in time, would you do the same thing again and my answer’s yes,’ said Claire, speaking on This Morning today. ‘I know I had this split second choice – i either go and try and stop him or stand back and save myself, drive up the road and potentially take out loads of other people. I never would’ve been able to live with myself.’

PC Claire Bond (pictured), 47, who is This Morning’s Emergency Services Pride of Britain Award winner, responded to reports of an out of control driver in Staffordshire in September 2018 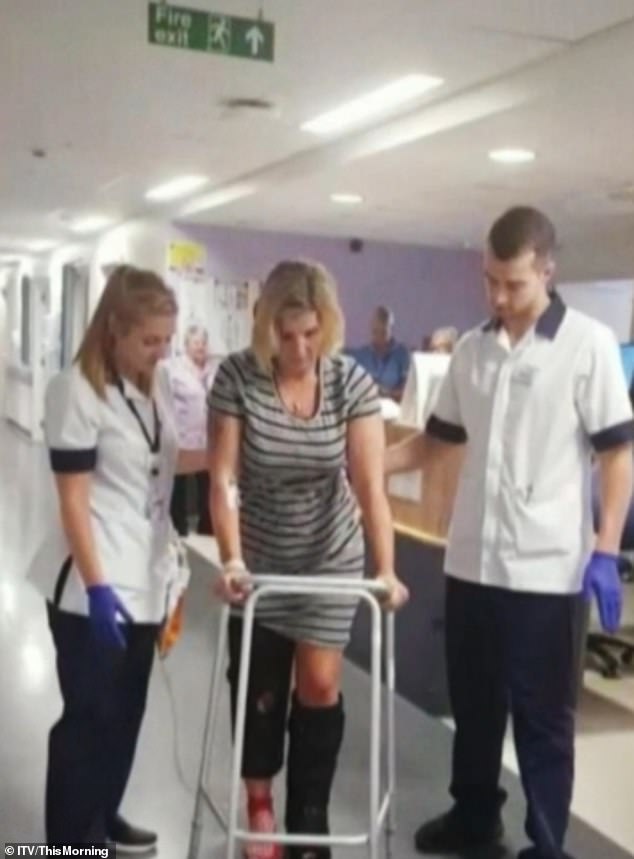 Clair was concerned the driver was planning to crash into runners taking part in a 10k race, and so  risked her life to stop him. Pictured, in hospital recovering

Drug dealer Gurajdeep Malhi had smashed into parked cars while fleeing police in a hired BMW. Thanks to Claire’s courage the driver was forced to flee and no one else was hurt, but PC Bond was left to fight another battle – her recovery.

She was left temporarily wheelchair bound and unable to work, but after 18 long months in April of this year, Claire defied the odds and out on her uniform once again.

‘I’m walking,’ she said, speaking of her recovery. ‘I kept my left foot which was always a worry to begin with. I’ve had two years of really hard work and massive help from both the police forces, both West Midlands and Staffordshire, and my husband has just pulled me through what I have to say is two very long years.’

TV presenter Eamonn Holmes when on to ask Claire, whose story will be told in full on Sunday night’s Pride of Britain Awards on ITV at 9pm, what it felt like to finally put her uniform back on.

‘It was one of my focuses – was going to be get back to work,’ explained Claire. ‘Somebody gave me a great piece of advice and said, “if you’re going to go back to work, go back as soon as you can, whatever role it is, and just continue being a police officer – which is something I always wanted to do. And why give up?’

Speaking on knowingly risking her life, Claire said: ‘I want to take care of people and do a good job. I want to change some awful situations. My aunt was a police officer and when I was young girl that’s all I wanted to do. I joined a little bit later on but most police officers you speak to just want to take look after the country.’

She continued: ‘He wasn’t stopping. We tried everything – including pepper spray. I just knew I had to go and give it one more chance and unfortunately I got myself into a bit of a pickle.’

Eamonn Holmes went on to ask whether PC Bond thought it was the end.

‘I knew I was in a bad position when he was reversing me down the fence,’ she explained. ‘When I eventually came to the stop on the floor i looked up and saw reverse lights and at that point, I thought I might not recover from this.

She was left temporarily wheelchair bound and unable to work, but after 18 long months in April of this year, Claire (pictured) defied the odds and out on her uniform once again.

‘I remember a colleague once telling me he was run over and his stab proof saved his body so I thought I just need to try and save my head.’

She continued: ‘I was just so scared, that’s when I shouted out to Dave, and luckily, he’s pulled me out the way. We did it as a team that day really. I knew we keep saying that, but he is my hero.’

To receive her award, Claire was taken to The Voice studios where she thought she was going to get a tour. However, singer Olly Murs revealed the news she was a Pride of Britain Award winner.

‘My husband kept it secret for weeks,’ she explained. ‘He’s never managed it before – he’s so proud of himself. Oh I couldn’t get a hug -what’s that all about?

‘When I was sitting in the wheelchair my friend Kat wanted to take me to Birmingham. He was doing a signing in HMV and I wasn’t really in a good place, I was still in the chair and I didn’t want to spoil it for her.

‘She took a CD and he actually wrote ‘get well soon Claire.’ It’s like it went 360 and I knew it was his voice as soon as he come out.’