‘When being kind becomes a crime’: Police mocked after hunting for man seen posting CASH through someone’s letterbox in Somerset town

Police have been mocked for trying to track down a mystery man who posted money through someone’s letterbox in an apparent act of random kindness.

Avon and Somerset Police began investigating the bizarre donation after a resident reported receiving cash at her home in Frome, Somerset.

The Frome Neighbourhood Policing Team said: ‘[We] have received reports of a male posting sums of money and letters through doors in the community.

‘We are keen to speak to this male and ascertain the reasoning behind this act.’

Avon and Somerset Police made the appeal for information on Facebook but were soon mocked by locals for investigating the apparent act of kindness.

One resident commented: ‘When being kind becomes a crime…’

Another said: ‘I would much rather you be concerned with the amount of fly tipping and rubbish across our town, than a random act of kindness!’

A third commented: ‘But surely, someone will have reported this in order for this to have been posted.

‘Are acts of kindness really that rare now, that people are afraid/upset when it happens?!’

But another saw the funny side as they added: ‘Please come post money to me whomever you are!’ 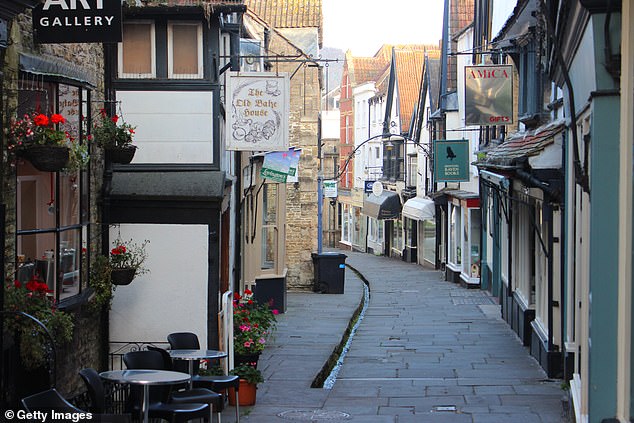 Avon and Somerset Police began investigating the bizarre donation after a resident reported receiving cash at her home in Frome, Somerset (pictured)

A spokesman for Avon and Somerset Police has since told MailOnline that it was just a single resident that was affected, despite officers saying in their original appeal cash had been posted through more than one door.

He said: ‘On Friday 19 February we were contacted by a resident in Frome who had received cash and a note through her letterbox from an unknown man, which she was not expecting and was not addressed specifically to her.

‘Amid concern the money had been wrongly delivered, we appealed for information to discover who the cash had belonged to.

‘A man has since come forward and has confirmed it was a generous act of kindness.’

Although the case has now been resolved, it is not the first time that police have taken ‘unnecessary’ action against acts of kindness amid the ongoing coronavirus pandemic.

Last year Greater Manchester Police were forced to apologise after a man who said he was delivering food to vulnerable family members was arrested and threatened with pepper spray.

Footage showed an officer putting handcuffs on the Good Samaritan for ‘breaking Covid rules’ before screaming ‘you’ll be next’ to a bystander in Fallowfield, Manchester.

It comes after Home Secretary Priti Patel defended police in January this year as they continued the strict application of Covid rules.