Green Bay police launch review after video emerges of an officer GRABBING Packers running back A.J. Dillon by the back of his collar as he entertained fans in a rain delay during Man City’s Saturday night friendly vs. Bayern Munich

Green Bay police say their internal affairs department is conducting a review after a video on social media showed an officer grabbing Packers running back A.J. Dillon during a Saturday night soccer match at Lambeau Field.

Video posted on social media showed Dillon in the end zone greeting fans in the stands during the exhibition match between Bayern Munich and Manchester City.

Dillon appeared to be on the verge of doing a Lambeau leap into the crowd when the video showed an officer grabbing him by the back of his collar and giving him a shove.

After fans booed and Dillon appeared to offer an explanation, the officer backed off and allowed Dillon to jump into the stands.

When the video started to gain attention on social media, Dillon tweeted out his account of what happened.

Green Bay police is conducting a review after a video on social media showed an officer grabbing Packers running back A.J. Dillon 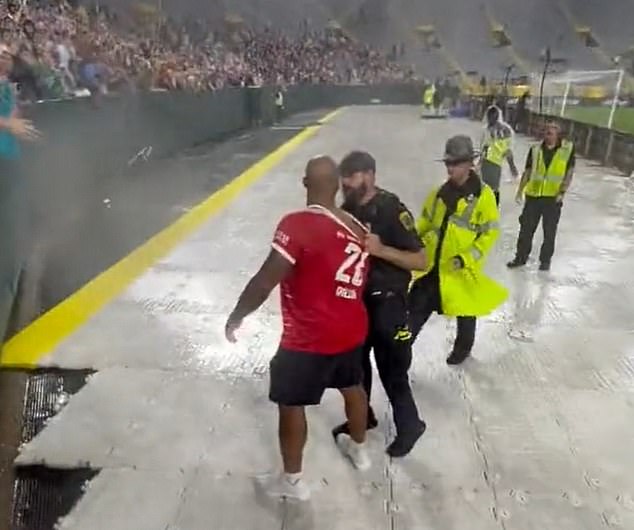 Two security told me and helped me come down to the field during the 30 minute rain delay, so I could do a lambeau leap and hype up the crowd… I’m assuming he missed them telling me to come down. https://t.co/fxbKKtfhUW

‘It is clear that there was a miscommunication between the officer and Mr. Dillon,’ Green Bay police chief Chris Davis said Monday in a statement.

Davis’ statement didn’t identify the officer shown on the video.

Dillon said on social media that a couple of security officials had helped him come down to the field during a rain delay in Saturday’s soccer match so that he could do a Lambeau leap to excite the crowd.

‘I’m assuming (the officer) missed them telling me to come down,’ Dillon said.

In a later tweet, Dillon described the incident as ‘just miscommunication between parties.’

‘The (at)GBPolice are great people and I’m glad we have them down for our games to keep us safe,’ Dillon said. 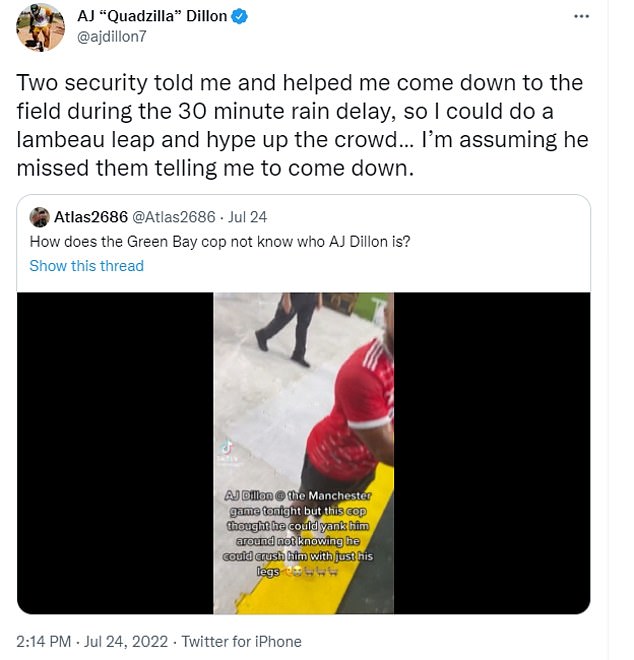 ‘Standing there in the pouring rain with all those people, it’s hard to know what’s going on with just one. All good.’

When he was asked about the incident Monday after the Packers’ annual shareholders meeting, team president/CEO Mark Murphy called it ‘obviously a very unfortunate situation that occurred.’

The game itself ended 1-0 to Man City with new signing Erling Haaland scoring the decisive goal just 12 minutes into the match.