Police will be distracted by ‘curtain twitchers’ snitching on their neighbours, officers warned on Monday after a Home Office minister told the public to report anyone flouting the new ‘rule of six’.

Policing minister Kit Malthouse sparked a row by telling the public to phone the police’s non-emergency 101 number if they see neighbours having a party.

On Monday, the controversial new coronavirus restrictions banning groups larger than six came under fire as a list of exemptions was published, creating further confusion for the public.

Under the new regulations, ‘mingling’ in a large group has been banned, with the exception of sports and organised outdoor activities such as hunting.

Policing minister Kit Malthouse sparked a row after telling the public to report anyone flouting the Government’s new ‘rule of six’, which came into force on Monday 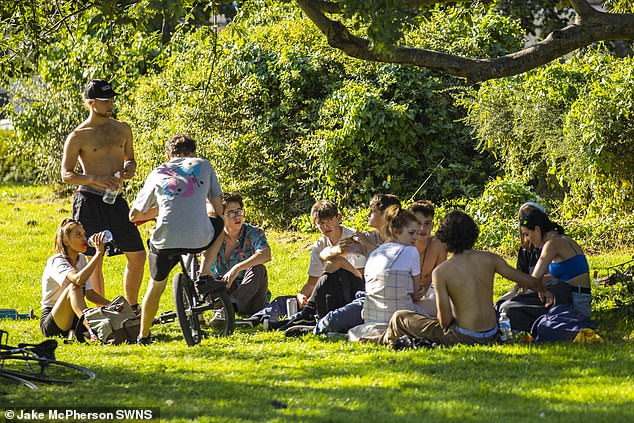 New coronavirus rules banning groups larger than six came under fire as a list of exemptions was published. Pictured, a group gather in St George Park, Bristol, on Monday 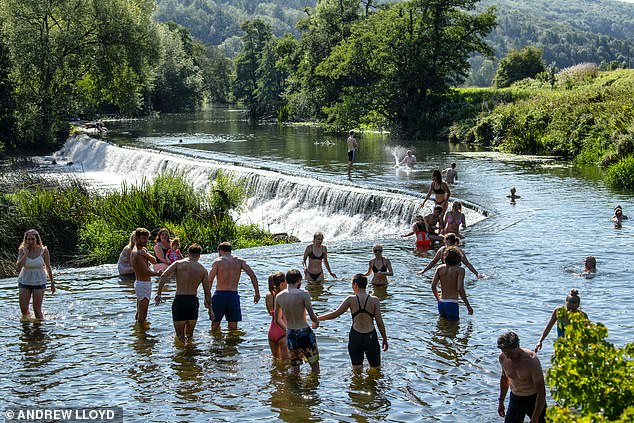 The rules came in as temperatures of up to 30C swept the country, with Britons flocking in groups to beaches and parks (above, people in the river Avon near Bath in Somerset)

Larger gatherings are permitted for work, childcare or political protests. But meeting six friends for a kick about in the park, a picnic or party is illegal.

The rules came in on Monday as warm weather swept the country, with Britons flocking in groups to beaches and parks to enjoy temperatures of up to 30C.

But the new regulations state that people must not ‘mingle with any person who is participating in the gathering but is not a member of the same qualifying group as them’.

They add: ‘Activities where there is a significant likelihood of groups of more than six mingling… should not take place until further Covid-19 secure guidance has been developed and approved to enable the activity to happen safely.

‘This may include extended tour groups, large banquet dinners, society or club meetings, or amateur music or drama rehearsals.’

However, places of worship, gyms, restaurants and hospitality settings can still hold more than six in total, while up to 30 can attend weddings and funerals.

The regulations were published just before midnight on Sunday, moments before they came into effect and without police having time to draft their own guidance.

But on Monday Mr Malthouse said rule breakers should be shopped to the authorities. 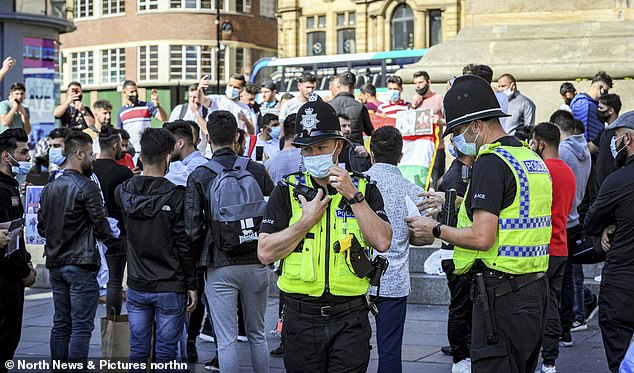 ‘Mingling’ in a large group has been banned, but larger gatherings are permitted for work, childcare or political protests (above, a demonstration in Newcastle city centre on Monday) 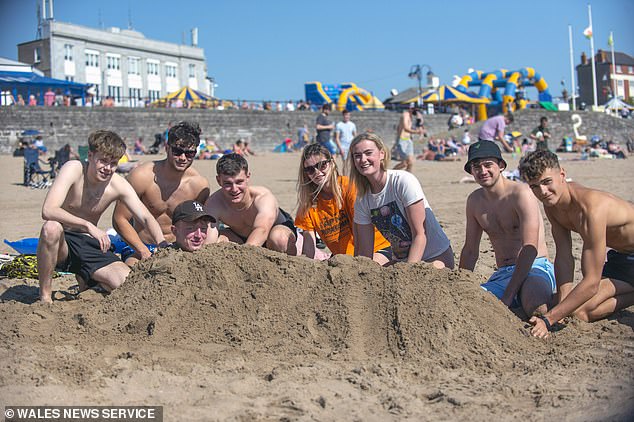 Groups of up to 30 can still gather outdoors in Wales (pictured, Cardiff university students at Barry island beach on Monday) as long as they maintain social distancing 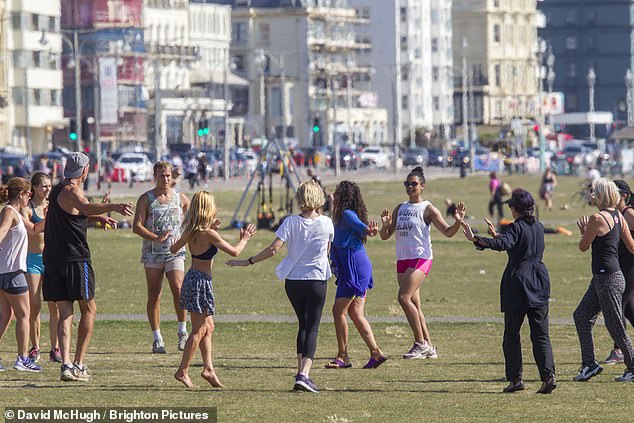 Meeting groups of friends for a picnic or party is now illegal, with rule breakers facing fines of £100. Pictured, a group gather in Hove after the new rules came into force

He told BBC Radio 4’s Today programme: ‘We are in discussions about what reporting mechanisms there might be, but there is obviously the non-emergency number that people can ring and report issues they wish to.’

When pressed on whether that would involve reporting a gathering of seven or more in a neighbour’s garden, Mr Malthouse said: ‘It is open to neighbours to do exactly that through the non-emergency number, and if they are concerned and they do see that kind of thing, then absolutely they should think about it.’

Ministers have given the green light for grouse shooting to be included on a list of sports that are exempt from the new coronavirus restrictions.

Other physical activities that are allowed in groups of up to 30 include hunting with guns, paintball and team sports such as football, hockey and netball.

The guidance warns the public not to gather in groups of more than six before or after the activity, and to maintain social distancing wherever possible.

The Government last night faced criticism from opponents of hunting, but was praised by those who had warned that a ban would impact the rural economy.

Tim Bonner, chief executive of the Countryside Alliance, said well-organised shooting and hunting meets posed ‘no serious risk’ to the spread of the disease, as organisers are able to implement social distancing outdoors.

He revealed he cancelled his own child’s birthday party to avoid breaking the rules.

He added: ‘Police officers will obviously assess the situation in front of them but in the end we all have an individual duty towards our collective health and we hope that view will prevail.

‘Police should start by encouraging people to comply and explaining to them what the situation is and impressing upon them the duty they have to our collective health. Only in the situation where individuals refuse to comply should police consider moving towards enforcement.’

But No 10 sparked confusion by suggesting that police would not immediately start imposing fines on those who break the rules the first time.

On Monday Ken Marsh, chairman of the Metropolitan Police Federation which represents rank-and-file officers, said: ‘If this was so important why did Boris Johnson wait to bring this rule of six in?

‘People have been going out drinking, meeting their friends potentially spreading the virus, essentially doing what they want over the weekend because they knew it wasn’t coming in until the next week.’

He predicted police would be distracted from frontline duties such as fighting knife crime, saying: ‘We have not got a never ending pot of officers, they will be distracted by curtain twitchers – people phoning up saying I’ve seen seven people in next door’s garden.’

Mr Marsh said the new rules were a ‘perfect storm’ for police amid a rise in crime levels and protests.

Police are also concerned about enforcing different rules in Wales and Scotland, where under-12s are exempt from the crackdown.

Groups of up to 30 can still gather outdoors in Wales as long as they maintain social distancing.