Police were forced to manage traffic chaos in Leicestershire as hundreds of travellers gathered at an annual horse fair amid the coronavirus pandemic.

Mountsorrel was overrun with heavy traffic as hundreds of travellers descended on a small field, which was hosting the annual horse fair.

Police were seen attending the area, as rows of cars blocked roads and pedestrians were seen walking across busy carriageways.

It is unclear whether the event was authorised by officials. But, it is currently illegal to meet outside in groups of more than six people, who you do not live with.

Police were forced to manage traffic as hundreds of visitors gathered at an annual horse fair in Mountsorrel, Leicestershire (pictured) 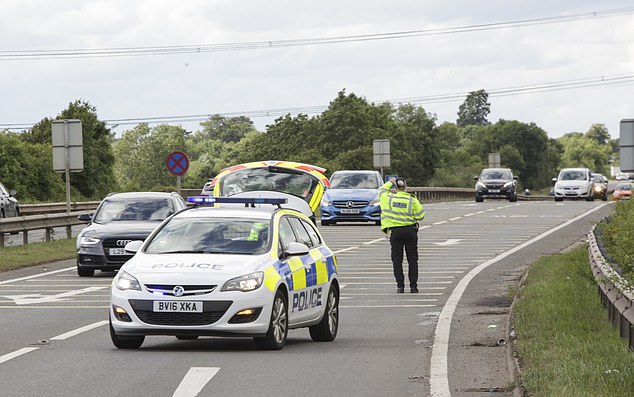 Police cars were seen attending the area (above), as they warned drivers to avoid the A6 near Mountsorrel due to the massive traffic build-up 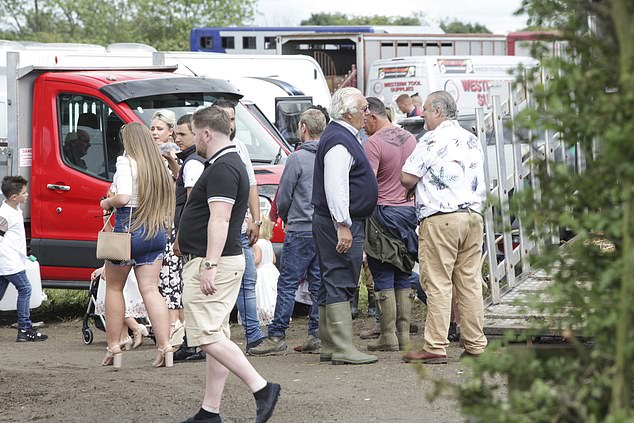 Some people even arrived for the festivities on horseback, riding up the busy road before arriving at the fair.

Police warned drivers to avoid the A6 near Mountsorrel due to the major traffic build up, LeicestershireLive reported.

The police force were aware that the fair was taking place on the ‘privately-owned’ land and are liaising with organisers to ensure coronavirus guidance is adhered to.

A spokesman said: ‘We are aware of a horse fair which is planned to take place on land off Betty Hensers Lane, Mountsorrel from Thursday to Sunday.

‘The fair is taking place on land that is privately-owned.

‘Officers from the Charnwood Neighbourhood Policing Area (NPA) have been liaising – and are continuing to liaise – with both the organisers and partners to ensure the fair is held in a way that is in line with current Government guidance around Covid-19. 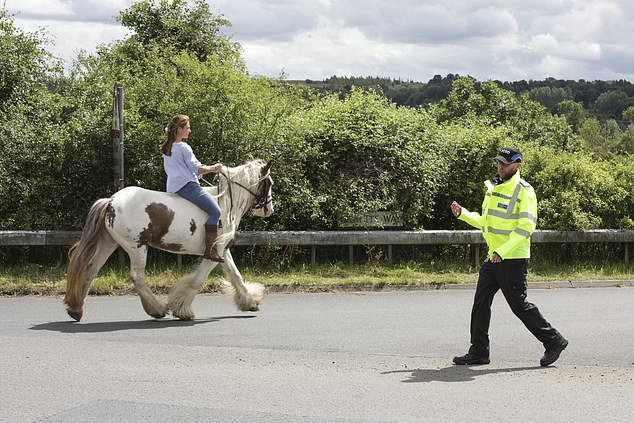 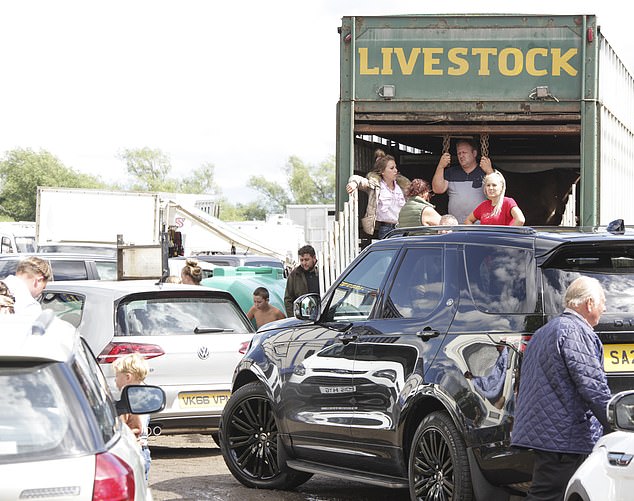 The annual horse fair, which started on Thursday and will go on until Sunday, attracts crowds of hundreds to the village each year 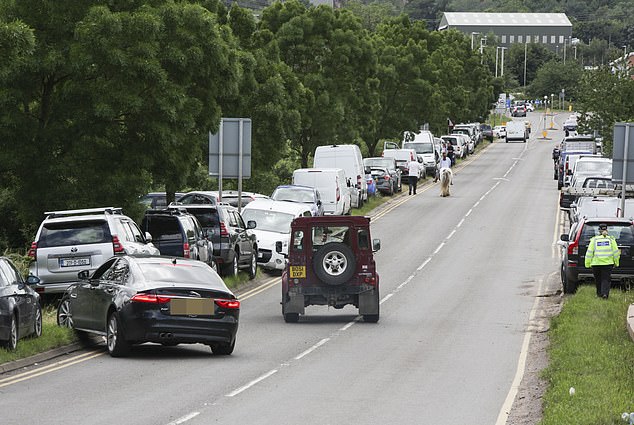 ‘We continue to take a proportionate approach following the four e’s to guide us around Covid-19. We will engage with the public, we will explain the risks, encourage the public to take our advice and enforce only as a last resort.

‘Officers are aware of an increase in traffic in the immediate area throughout Saturday and have been in attendance assisting with traffic management. This will be reviewed as the fair continues tomorrow.’

The annual horse fair started on Thursday and is due to go on until Sunday.

This comes after Earl Shilton travellers’s horse fair in Leicestershire had to be cancelled earlier this month amid concerns about the spread of coronavirus.

The event was due to be held at Dalebrook Farm but was cancelled due to bans on mass gatherings under coronavirus guidance. 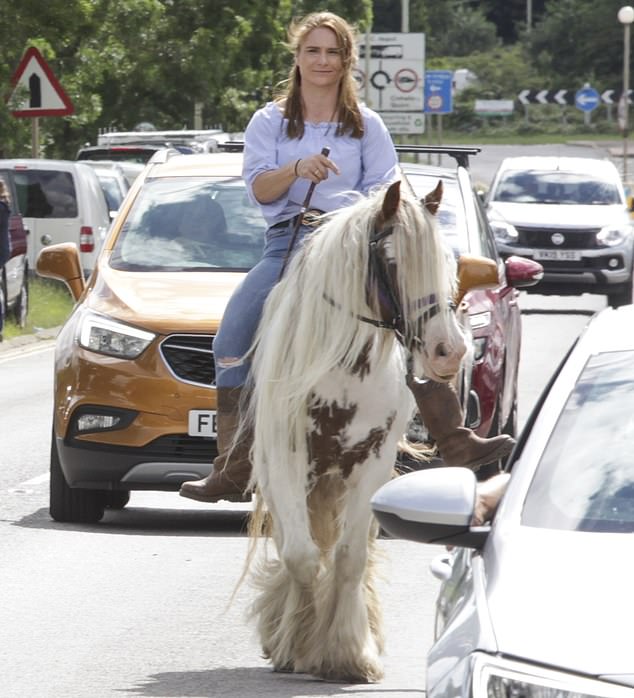 A woman rode her horse up the busy road to the annual event in Mountsorrel, as police attended the traffic build-up 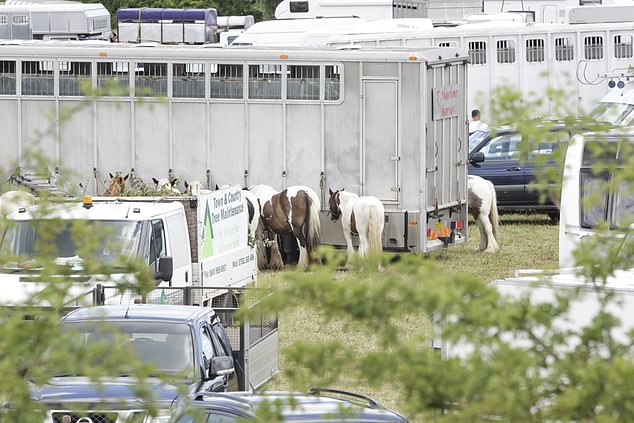 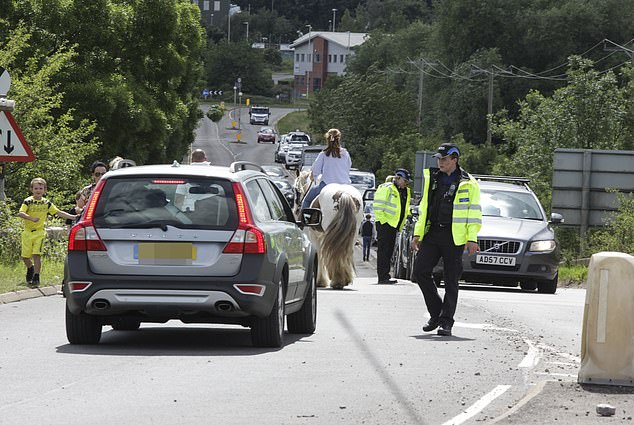 It is unclear whether the horse fair was authorised by officials. But, it is currently illegal to meet outside in groups of more than six people, who you do not live with

People were also worried about highway issues as well as public health concerns.

Appleby Horse Fair was also cancelled for just the second time in its 250 year history because of the coronavirus pandemic.

But around 100 people still arrived with their horses in the Cumbria town on June 7, despite police and gipsy leaders urging people not to travel.

One local said: ‘Everybody knew this was going to happen, there was no way they would stay away and they were able to arrive here without being checked.’

Police are continuing to assist with traffic management around the Mountsorrel horse fair as it continues into the weekend.