A police dog has returned to duty after being slashed in the face with a machete wielded by a 16-year-old thug.

The dog, named Stark, was fortunate not to lose his eye and needed to undergo surgery after being struck five times in the head.

He was cut after police responded to reports of people breaking into sheds on allotments in Handsworth, near Birmingham.

Handler PC Paul Hopley feared his three-year-old German Shepherd and Belgian Malinois cross was going to be killed, such was the ferociousness of the attack.

The teenager, who cannot be identified due to his age, has previously admitted causing unnecessary suffering to a police dog and possession of a machete.

But a ‘trial of issue’ took place at Birmingham Youth Court earlier on Friday after his basis of plea was contested; in particular his claims he was alone in the allotments and that he did not realise Stark was a police dog.

District Judge John Bristow confirmed he ‘rejected’ the defendant’s version of events, adding he was ‘sure’ he was with others and that he was fully aware police were hunting for him.

PC Hopley told the court he responded to a report of multiple people with torches breaking into sheds at the allotments at around 4.15am on November 14.

He stated it was pitch black and described the site, which is one of the largest allotments in the UK, as so vast it would have taken him a day to search all of it even in daylight.

The officer decided to concentrate on a particular area with Stark off the lead, and said after around 20 minutes there was a ‘distinct change in his behaviour’. 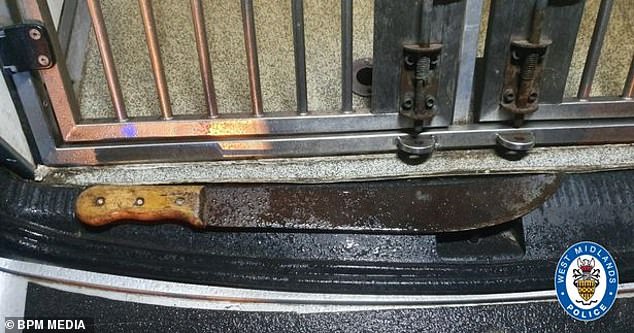 The dog, named Stark, needed to undergo surgery after being struck five times in the head

PC Hopley told the court he heard shouting and realised Stark had found someone.

He recalled shouting ‘stand still, stay where you are, police officer’.

The officer said as he got closer he saw the defendant striking Stark with what looked like a stick, hitting him repeatedly at least 20 times, but then to his own horror he soon realised it was a wooden handled machete.

PC Hopley, who was visibly emotional in court, said: ‘I shouted at him to stop hitting the dog.

‘I couldn’t get any closer I genuinely thought he was going to kill my dog. So I drew my incapacitant spray and sprayed him. There was no other option available to me.’

He explained he did not call Stark back in fear that if he turned around and was struck he could be paralysed.

PC Hopley added: ‘He stopped hitting the dog but held it [the machete] in his right hand. He wasn’t at that point waving it about. 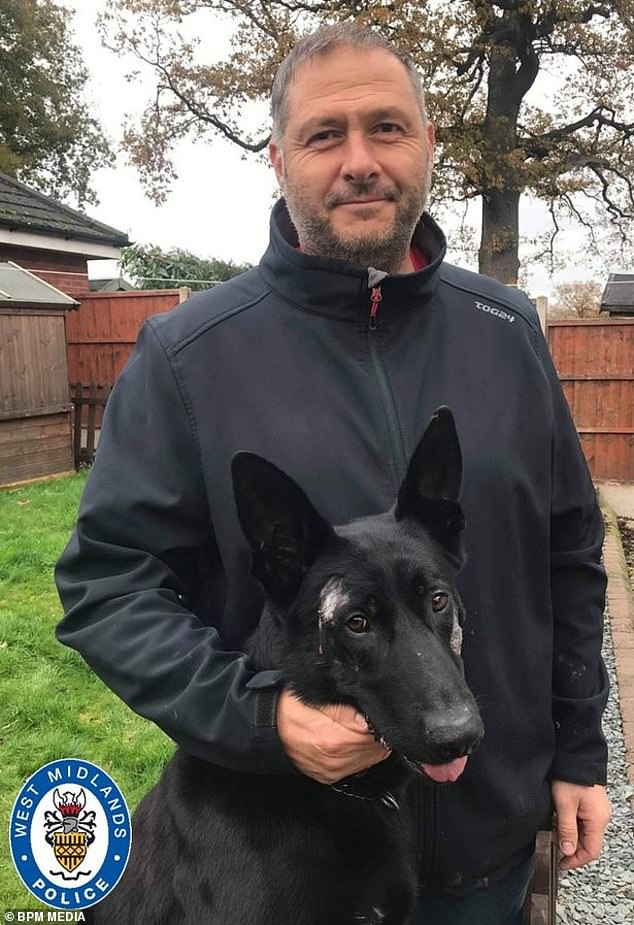 He was cut after police responded to reports of people breaking into sheds on allotments in Handsworth, Birmingham. Handler PC Paul Hopley feared his three-year-old German Shepherd and Belgian Malinois cross was going to be killed, such was the ferociousness of the attack

‘The incapacitant spray clearly worked so I rugby tackled him, and at the same time Stark detained him.’

The officer said he allowed Stark to drag the defendant four to five metres away and was then satisfied he was not in reach of the machete.

Body worn camera footage was played to the court which showed the defendant yelling out during the confrontation, and then continuing to complain after Stark had released him.

PC Hopley could be heard saying: ‘You tried to kill my dog what do you expect?’

Stark sustained five cuts to his head and was fortunate not to lose his eye. But after undergoing surgery he was able to return to duty in December.

The teenager also gave evidence during the hearing. He claimed he went to the allotments alone to ‘calm down’ after having a row with his girlfriend.

He denied knowing a police officer and dog were looking for him and stated when he first saw Stark, he tried to run but fell and only started swinging when the dog got close.

Under cross-examination the teenager broke down in tears after saying he struck Stark four to five times adding if he had hit him 20 times the dog would have died.

When asked why he initially told officers that he had been with others who ran away, he changed his account and insisted he was alone.

He added: ‘I was scared. I didn’t know what was happening. I was panicking.’

The teenager will be sentenced at the same court next Friday, February 19.

DJ Bristow stated he would consider a referral order, which is a community based sentence, as well as a detention training order, which involves a term in custody.

He warned the defendant’s punishment would now be more severe than if his basis of plea had been accepted.