EXPRESS INFORMER > Science & Technology > Police called to scene of worst ever car crash in Lincoln, Nebraska by IPHONE that was in car

The new crash detection feature on iPhones 14 alerted police to a tragic wreck on Sunday that left all six young passengers in the vehicle dead.

Officers say the the black Honda Accord slammed into a tree in Lincoln, Nebraska, in the early hours of the morning.

Five men died at the scene at around 2.15am, while a 24-year-old woman was left in critical condition and died later at a nearby hospital.

In the immediate aftermath of the crash, an iPhone 14 belonging to one of the passengers alerted emergency services to the scene.

The iPhone feature meant first responders were made aware of the incident, despite there being no other witnesses to what police have described as ‘the worst crash in Lincoln in recent memory.’

The 22-year-old driver has not been named.

The other victims were one 21-year-old, one 23-year-old and two 22-year-olds – including a man by the name of Jonathan Koch.

It’s unclear what caused the crash, or where the group was driving when it occurred.

Six people in their 20s were killed in a car crash in Lincoln, Nebraska on Sunday 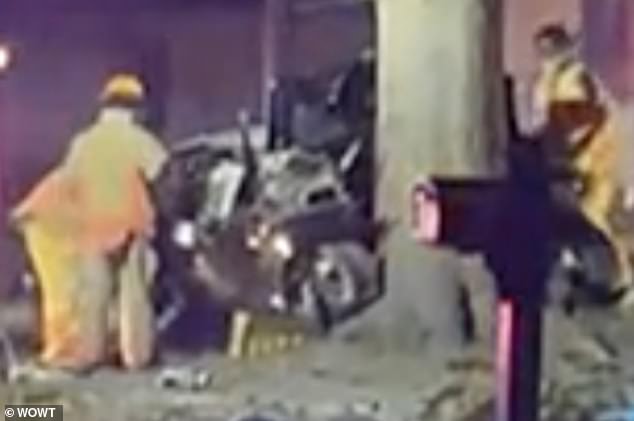 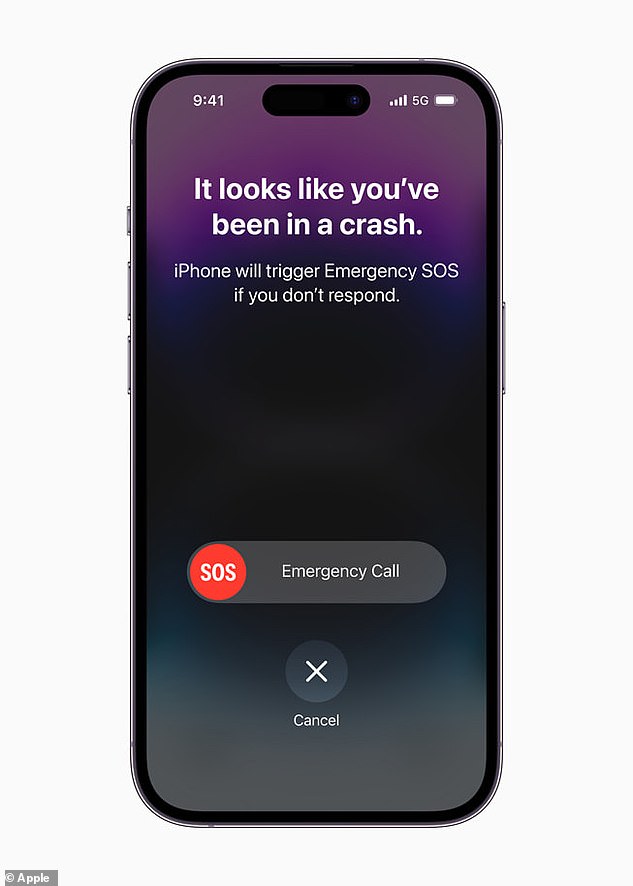 The iPhone 14 features a new sensor with a high-G-force accelerometer that detects when the user has been in a car crash, such as ‘side impact, rear end collision and rollovers’

Brad Bartak told WOWT that the crash happened on his front lawn. His son and daughter ran into his room saying that someone had ‘hit out tree’. 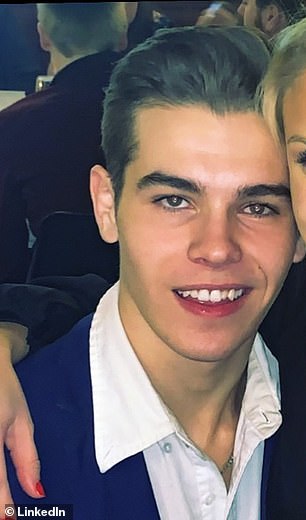 Six people died in the crash in Lincoln, Nebraska including 22-year-old Jonathan Koch

He and his other neighbors jumped into action, and tried to help before the first responders arrived. ‘I noticed that there was actually a fire coming from the engine… I basically grabbed the garden hose and ran it up to the car and we were dousing it,’ he told the news outlet.

Emergency responders were working at the scene for at least five hours after they arrived, onlookers said.

Upon hearing the news of the tragic crash, families and friends gathered at the scene on Bartak’s lawn. KETV reported the scene was littered with shredded tree bark. The local news outlet said skidmarks could be seen along the road leading up to the tree where the car crashed. Officers say the car slammed into the tree, but further details have not yet been revealed.

Tributes poured in for Koch from those who gathered there. Jonathan’s sister, Kayla Kelley, said: ‘Life is so short. In the blink of an eye, the world is just shattering around you.’ She added: ‘He was the most amazing person you’d ever meet.’

She described her brother as a man who loved his family, drawing, and to go out and spend time with his friends. He was charismatic and knew no strangers, she said.

Kelley later posted a tribute to her brother on Facebook: ‘As I’m sitting in your bedroom mustering enough strength to write something so beautiful for you nothing I say will bring you back or show the entire universe just how amazing you are!

‘My heart and my families is shattered into a million pieces! We are all beyond devastated, our entire world blew up like a bomb in a blink of an eye,’ she wrote.

Kaleigh Keown, another of Koch’s sisters, changed her Facebook profile picture to a photograph of her and her brother wearing Nebraska Cornhuskers football jerseys.

Although the cause of the crash remains under investigation, police explained how they were called after the iPhone detected it had been in a crash and called first responders automatically when the user didn’t react.

The iPhone 14 features a new sensor with a high-G-force accelerometer that detects when the user has been in a car crash, such as ‘side-impact, rear-end collision, and rollovers.’

The feature, dubbed ‘crash detection,’ only activates when traveling in a vehicle.

HOW DOES IPHONE 14 CRASH DETECTION WORK?

The iPhone 14 introduced a new ‘crash detection’ feature that automatically detects when the user has been in a severe car accident and calls for emergency assistance if they are unconscious or unable to reach their phone.

These are used in combination with components in previous iPhone models, like the barometer, which can detect cabin pressure changes, the GPS for additional input for speed changes, and the microphone, which can recognise loud noises typified by severe car crashes.

Apple has trained its algorithms on over a million hours of real-world driving and crash record data, to be able to accurately detect when an accident has taken place.

If the user is wearing an Apple Watch, this further improves accuracy.

When a severe crash is detected, the emergency services call interface will appear on Apple Watch, as it is most likely to be in closer proximity to the user, while the call is placed through iPhone if it is in range for the best possible connection.

‘This is the worst crash in Lincoln in recent memory,’ Lincoln Police Assistant Chief Michon Morrow said. ‘We’ve been trying to think of another accident this bad and we haven’t come up with anything.’

‘I’ve been with this department for 25 years and can’t remember anything as horrible. The cause of this accident is going to take us some time to pin down,’ Morrow added.

‘We are looking at all possibilities, including alcohol, speed or distracted driving.’

So far, investigators have not been able to find witnesses to the crash, which happened near 5600 Block of Randolph Street in Lincoln. The vehicle is believed to have been travelling eastbound when it struck the tree.

The Lincoln Police Department has asked for anyone with additional information or video of the incident to contact the LPD non-emergency number at 402-441-6000 or Crime Stoppers at 402 475-3600.

Writing on Twitter after the crash, Lincoln Police wrote: ‘Lincoln Police fatality investigators are still working to notify family members and collect evidence in a tragic overnight collision at 56th and Randolph Street. Five men were pronounced deceased. A woman was taken to the hospital in life-threatening condition.’

In a later update, the force added: ‘Sadly, the woman who was transported to the hospital has succumbed to the injuries she sustained in the crash. This is the worst crash in Lincoln in recent memory. Our hearts are heavy for the victim’s families.’

The iPhone 14 was released to the US market on September 16, with technology that can detect when users are in a car crash and automatically call emergency services.

This is thanks to a dual-core accelerometer that can detect G-force measurements when vehicles are hit. However, accelerometers are in most smartphones to detect screen orientation, and the car crash detection capability has been available on Google Pixel phones since 2019. 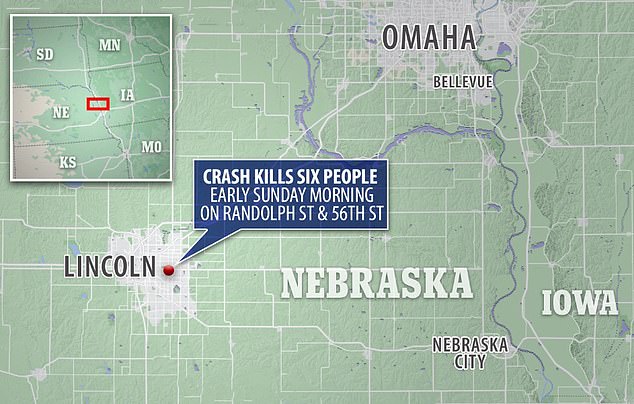 The crash occurred early on Sunday morning in Lincoln Nebraska 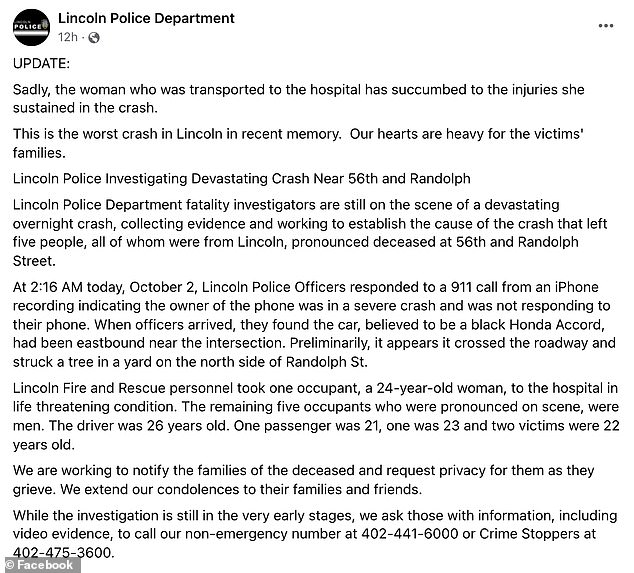