Police are tonight investigating a fatal broad-daylight stabbing in the middle of a busy London park.

The knife attack followed a mass brawl in the park’s tennis court area.

The fight is said to have broken out around 6pm tonight – as families sat in the park enjoying the Bank Holiday weather.

The male victim, who has not yet been named, died at the scene of the incident, despite the efforts of air ambulance crews to save him.

Officers say the 18-year-old victim died after being knifed in Montrose Park, Edgware, Barnet. Pictured: Police at the scene

Police have tonight launched an investigation and have arrested seven men.

In a statement, a Metropolitan Police spokesperson said: ‘Officers were called at 5.54pm on Monday, 31 May to Montrose Park, Edgware, following reports of a group of males fighting.

‘Officers responded and found an 18-year-old male suffering from a stab injury in a tennis court area.

‘He was treated by London’s Air Ambulance and London Ambulance Service at the scene. Despite their best efforts, he was pronounced dead at 7.19.

‘Police are working to inform his next of kin. Formal identification and a post-mortem examination will follow in due course.’ 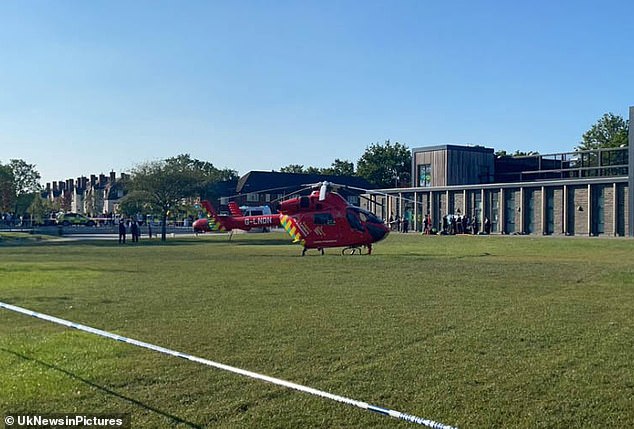 The male victim, who has not yet been named, died at the scene of the incident, despite the efforts of air ambulance crews to save him

The seven men have been arrested on suspicion of offences including affray and attempted murder, police say.

They are all in police custody tonight, according to Scotland Yard.

‘Officers are working to determine whether there any further reported injuries,’ the spokesperson added.

‘A crime scene is in place and enquiries are ongoing. Police are urging members of the public remaining in the area to please leave and go home.

Any witnesses or those with information, video or images that could assist police are asked to call 101 ref CAD 5436/31 May.