EXPRESS INFORMER > News & Politics > Police arrest man, 24, after 50 trees were chopped down along banks of Thames in Surrey

Police officers hunting for a mystery vandal who chopped down 50 trees along the banks of the Thames in Surrey have arrested a 24-year-old man who was found with chainsaws in his van.

Council officials and detectives had been left baffled by the series of tree axing which started on Sunday, March 21 and a hunt for the phantom lumberjack was launched.

Despite increasing night-time patrols with the help of a newly-formed residents action group and scouring CCTV footage police had struggled to catch the culprit, until last night.

Around 50 to 60 trees have been hacked down – many of them mature trees more than 20ft high – in a two-mile stretch between Walton-on-Thames and Weybridge, both of which are in the Elmbridge borough in Surrey. 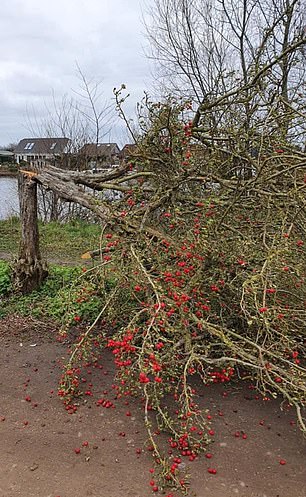 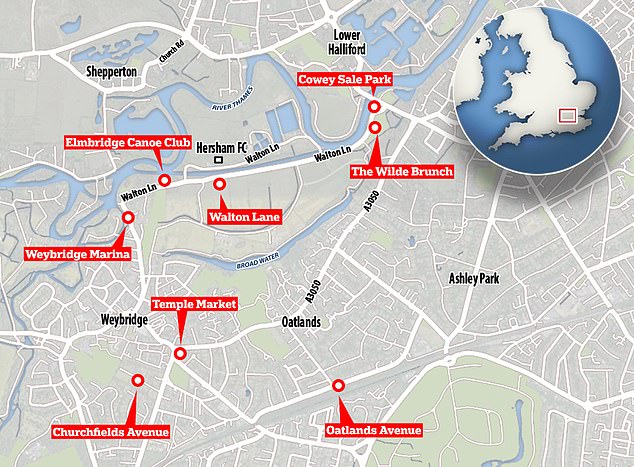 Some of the trees were felled and left lying across the road, causing traffic chaos, police said.

It was believed that the phantom tree feller was striking at night by pulling up in his vehicle, starting a chain saw and using it to slice through robust tree trunks.

His motive was not known.

The area is home to some of the UK’s highest earners with the average home selling at around £900,000 and some going for up to £14million.

At the weekend, eight more trees were chopped down – four on the same road, after the phantom lumberjack struck again. 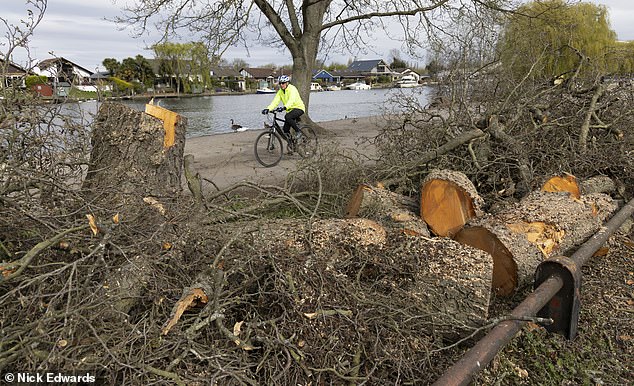 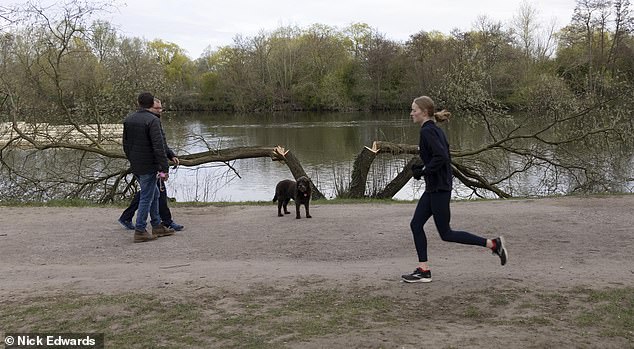 Surrey Police confirmed this morning that they had arrested a 24-year-old man on suspicion of criminal damage. Pictured: Chopped down trees in Walton-On-Thames

A statement from Surrey Police this morning confirmed officers had arrested a 24-year-old man on suspicion of causing criminal damage and going equipped.

‘Officers were first alerted on Sunday, March 21, after local residents had noticed that a number of trees had been cut down overnight.

‘Throughout the past month, more trees were cut down, some of which were left across the road, causing disruption to the area.

‘Surrey Police received a fantastic response from residents who contacted us with information, allowing investigating officers to identify a vehicle they believed to be connected. Last night, this vehicle was stopped.

‘Searches carried out in the suspect’s car and home address found several chainsaws and wood chippings. The man was arrested and remains in custody.’

Inspector Bert Dean, Borough Commander for Elmbridge said: ‘This is an encouraging development in this investigation. 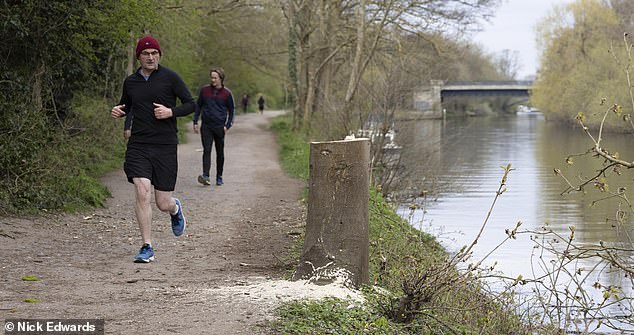 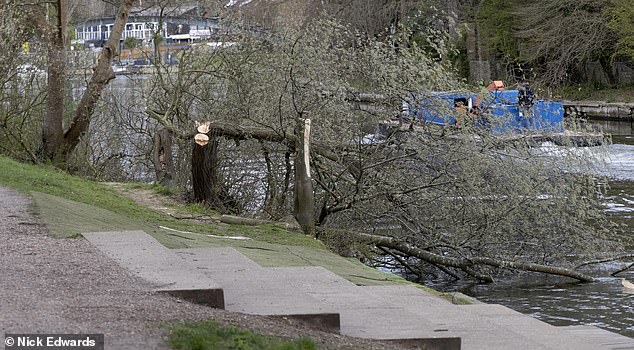 ‘We continue to piece together the evidence we have. Thank you again to the local community for their ongoing patience and support.’

Before the 24-year-old man was arrested Surrey Police revealed officers were ‘reviewing CCTV’ in the area in the hope of nailing the crook.

Speaking on Tuesday, Inspector Bert Dean asked members of the public to keep an eye out and send over any CCTV footage, adding: ‘Local officers are requesting any CCTV footage to be uploaded that may assist in identifying the suspect(s) who is committing this damage to trees in Elmbridge.’

Anthony Cilia, a retired kitchen-fitter from Weybridge, was among the first to spot the damage to the trees, one of which was sliced into several pieces.

He said: ‘Why this person is doing it is beyond me. There are plenty of wooded areas nearby to go to, but for some reason they are choosing to do it in a public area on the banks of the river.

‘Not only is it a blight on an area the council has spent several millions of pounds on improving, but more importantly, it’s dangerous.

‘Several of the trees have been downed on to the road running past the Thames by Walton Bridge, which has very little light in the evenings so could cause a car accident. 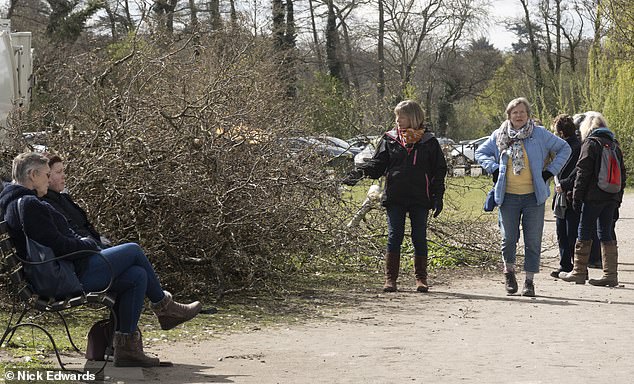 One local who lives in the area said: ‘I heard the buzzing of a chainsaw early this morning and raced out to confront the culprit but it was actually council workers slicing up one of the trees which had been felled overnight so they could remove it’ 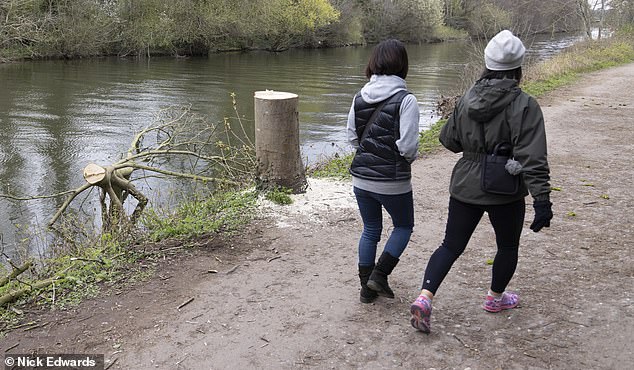 Two women walk past the scene of one of the mysterious tree attacks, which has left branches floating in the river

‘None of the trees look to have been chopped up for firewood, could it be someone with a grudge against the council? I don’t know, perhaps this person has mental health issues.

‘What is worrying is that whoever they are, they have access to a chainsaw, powerful enough to slice through a 60cm tree trunk.’

Another local resident, Christine Elmer, said that trees which had been grown specially in memory of loved ones who had died were also targeted.

She tweeted: ‘Really important if anyone has any info on who is going around our town and wider Borough cutting down trees, including Memorial trees, to get in touch with the Elmbridge Police.’

The founder of the Elmbridge Tree Patrol Facebook site, which now has more than 900 members, wrote: ‘As you all know there’s a maniac going around Weybridge, Walton on Thames and Cobham chopping down trees ruining the environment, eco system, habitats and making everyone upset. 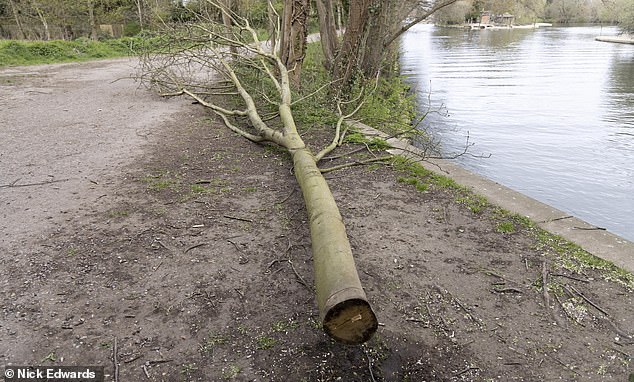 Elmbridge Borough Commander Inspector Bert Dean, of Surrey Police, added: ‘I do not underestimate the impact this mindless damage has on the local community as well as the risk it has posed to motorists by obstructing roads’ 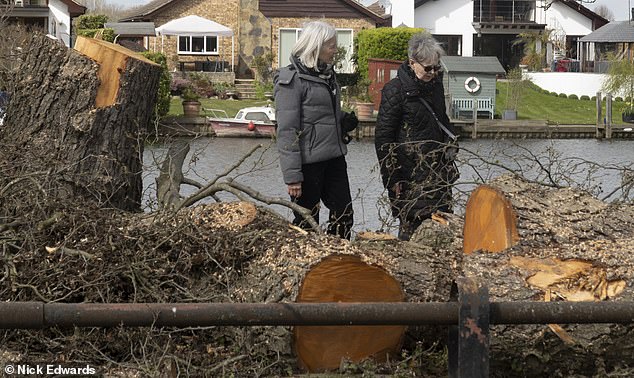 ‘I have set up this group so we can all as a community volunteer to patrol the area at night to try and hunt down and video record this lunatic.’

It states that the ‘Group Rules’ which members must follow include never giving the location of where they are patrolling, adding: ‘Do not confront this person for obvious reasons but instead record everything including his red car and pass it over to the police using the reference number.’

Concerned resident Rachel Young said: ‘This is causing major distress to the community at a time when we need our trees and green spaces more than ever.’

Susan Reynolds wrote: ‘It’s very worrying that someone is wandering around with a chainsaw and appears not to know how to use it properly.

‘Let’s hope that he/she is caught quickly before someone gets hurt, possibly the culprit!’

Kirstie Ahern added: ‘Looks like you have a serial feller on your hands’, and Kath Bennett joked: ‘I think it’s a case for Special Branch.’

Martin Deacon said: ‘Hopefully the next one will land on them.’