Incumbent Andrzej Duda was marginally ahead in Poland’s presidential election on Sunday, an exit poll found, in a result seen as likely to have profound implications for Warsaw’s relations with the rest of the European Union.

The re-election of Duda, an ally of the ruling nationalists Law and Justice (PiS), is crucial if the government is to implement in full its conservative agenda, including judicial reforms that the European Union says are undemocratic.

Duda’s challenger, liberal Warsaw Mayor Rafal Trzaskowski, has pledged to repair Poland’s relations with Europe and use the presidential veto power to hold back any legislation that would subvert the rule of law. 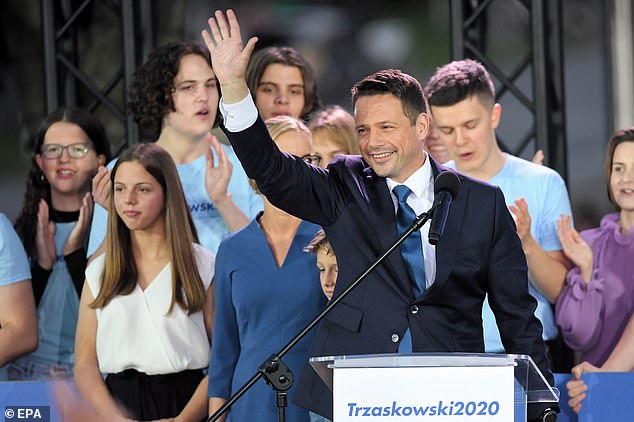 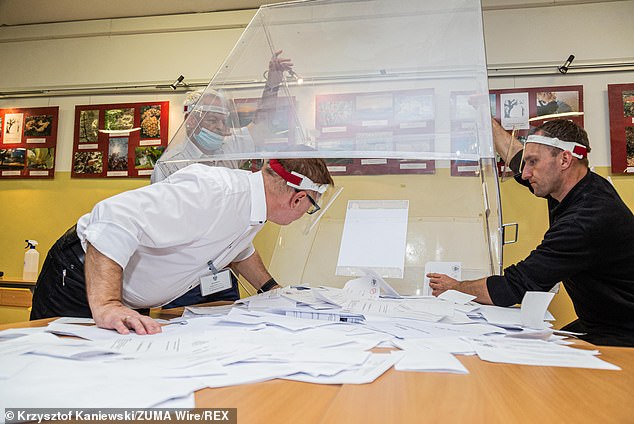 The exit poll by Ipsos showed Duda winning 50.4% of the vote, while Trzaskowski, the preferred candidate of the main opposition party, the centrist Civic Platform (PO), had 49.6%. Ipsos said it was too early to call a winner. Above, the votes are counted

The exit poll by Ipsos showed Duda winning 50.4% of the vote, while Trzaskowski, the preferred candidate of the main opposition party, the centrist Civic Platform (PO), had 49.6%. Ipsos said it was too early to call a winner.

Andrzej Duda was elected as president of Poland in August 2015.

He was a candidate for the country’s Law and Justice Party (PiS) and claimed 51.55% of the vote.

The PiS is a conservative, Christian-democratic party and currently the largest party in Poland.

In 26 May 2015, Andrzej Duda resigned his party membership as the president-elect. 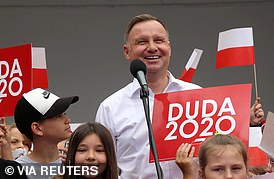 On October 24, 2019 he received the official support from PiS ahead of his re-election campaign.

Before becoming president, Duda served as an undersecretary of state in the Chancellery of the President of the Republic of Poland from 2008 to 2010.

He became a member of the Sejm, or lower parliamentary house, in 2011 after receiving 79,981 votes for the Kraków area.

In June 2020, Duda said that he would not allow gay couples to marry or adopt children, and has described the LGBT movement as a ‘foreign ideology’.

In February 2018, Duda said that he would sign into law the Act on the Institute of National Remembrance, making it illegal to accuse Poland of complicity in the Holocaust.

‘All we need is to count the votes. The night will be tense but I am certain that when the votes are counted, we will win,’ Trzaskowski told supporters in a park just outside Warsaw’s historic Old Town.

Opinion polls before the election had shown the candidates, both 48, neck and neck, with Trzaskowski having closed the gap on Duda, who initially looked like a clear favourite.

Backed by the government, Duda ran an acrimonious campaign, laced with homophobic language, attacks on independent media and accusations levied against Trzaskowski that he would serve foreign interests instead of Poland’s.

Duda, a devout believer, had painted himself as a defender of Catholic values and of the government’s generous social benefit programmes that have transformed life for many, especially in the poorer rural regions of the country.

He appeared conciliatory on Sunday. ‘If anyone was offended by anything I did or said in the last five years, not just during the campaign, please accept my apology,’ he told supporters in Pultusk, a small town north of the capital.

Duda has also championed large infrastructure projects, which he says will create jobs and boost the country’s autonomy and international standing.

For many religious conservatives in Poland, Trzaskowski came to represent the threats facing traditional values when he pledged to introduce education about LGBT rights in the city’s schools.

The archbishop of Krakow, Marek Jedraszewski, told worshippers in the southern city of Czestochowa on Saturday that Poland faced a ‘lethal danger’ from ideologies that seek to undermine the traditional family structure and corrupt children.

Trzaskowski says he seeks a more tolerant Poland and has criticised PiS’ rhetoric, vowing to abolish state news channel TVP Info, which critics say gave overt support to Duda in its programming.

‘In politics, you should have opponents, not enemies,’ Trzaskowski said on Sunday. ‘They thought they had full power, but today they have fear in their eyes.’

Duda’s re-election to a second five-year term would open up the prospect of three years of uninterrupted rule by PiS, which controls the lower house of parliament, with the next national election scheduled for 2023. 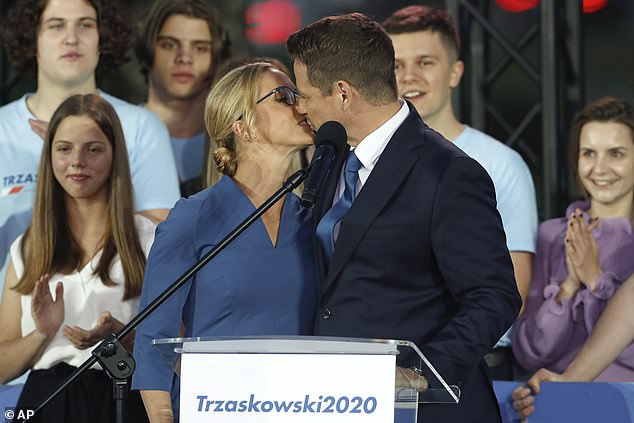 Presidential candidate Rafal Trzaskowski kisses his wife Malgorzata at the end of the election day in Warsaw, Poland, Sunday, July 12 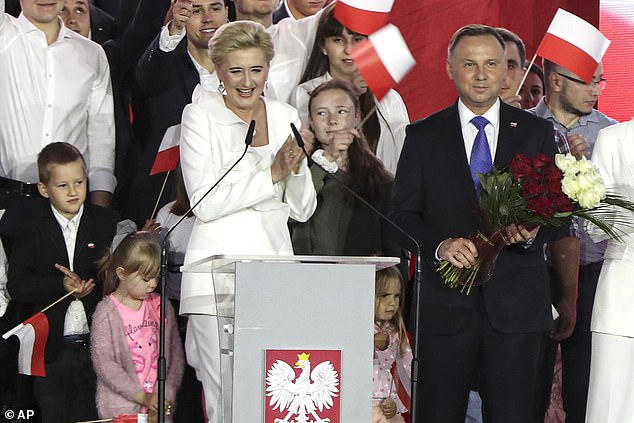 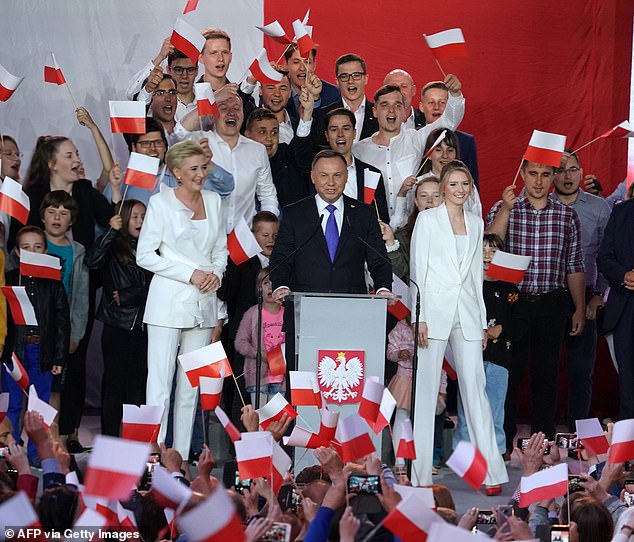 Observers say his defeat could undermine the fragile parliamentary majority that supports the PiS government, raising the spectre of political instability as Poland is coping with the economic fallout from the coronavirus pandemic.

The election is being closely watched in Brussels.

Before PiS and Duda came to power in 2015, Poland had one of the most pro-European administrations in the bloc’s ex-communist east. But it has grown increasingly isolated, with divisions focusing on climate change and migration, in addition to democratic norms. 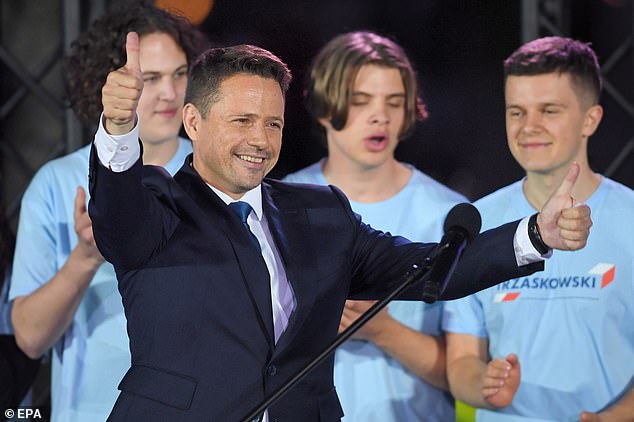 Who is opposition candidate Rafal Trzaskowski? 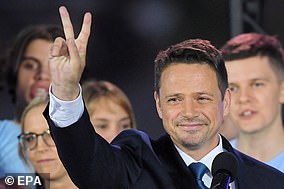 Rafal Trzaskowski is the Mayor of Warsaw and the presidential candidate for Poland’s main opposition party Civic Platform and Civic Coalition.

He has previously served as a Member of the European Parliament from 2009 to 2013, as well as the Secretary of State in the Ministry of Foreign Affairs from 2014-2015.

He was elected Mayor of Warsaw with 56.67% of the vote, beating his major rival Patryk Jaki of the Law and Justice Party.

During his mayoral term, Trzaskowski introduced, among others, a free nursery program for Warsaw kids, increased funding under the Warsaw in vitro program and carried out record purchases of clean public transport vehicles.

On 18 February 2019, Trzaskowski signed a 12 point LGBT declaration and announced his intention to follow WHO guidelines aimed at fighting discrimination of the LGBT community.