Pokémon, created by Satoshi Tajiri, started as a video game called Pocket Monsters in Japan in 1995.

An instant hit, it was commissioned as a TV series in 1997.

It was temporarily taken off air in 1998 after at least 700 viewers were hospitalised due to excessive use of strobe lighting and special effects in an episode on December 16 1997. People aged three to 58 suffered epilepsy symptoms for more than 24 hours.

Pokémon, created by Satoshi Tajiri, started as a video game called Pocket Monsters in Japan in 1995. An instant hit, it was commissioned as a TV series in 1997

After returning to Japanese screens in April 1998, and renamed Pokémon, the series was syndicated to America – and soon became an international phenomenon.

The Pokémons were released in ‘generations’.

The first generation, labelled Red and Blue, consisted of the ‘main’ 151 characters. These reside in the fictional region of Kanto – inspired by Japan’s Kanto district. 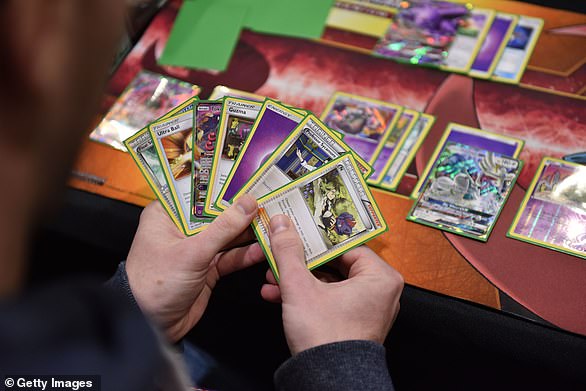 The second generation, Gold and Silver, introduced 100 more Pokémon in 1999.

In the past an ultra-rare Pokemon card featuring the character Pikachu has sold at auction for as much as $195,000.

The Pikachu Illustrator card was given in January 1998 to winners of the CoroCoro Comic Illustration Contest and only 39 were ever made.

It’s believed only 10 of the cards in circulation are in mint condition and it is unclear how many are still privately owned.

The card, considered the most valuable and iconic Pokemon card among collectors, was designed by Atsuko Nishida, one of the chief graphic illustrators of the series.

It depicts the fan-favorite yellow rodent Pikachu, holding what appear to be drawing utensils.

Another card that could be worth a pretty penny is the first edition Shining Charizard, a fan favourite from the height of the Pokémon craze in the late 90s.

Cards in pristine condition regularly sell for around $1,000 or more on eBay.